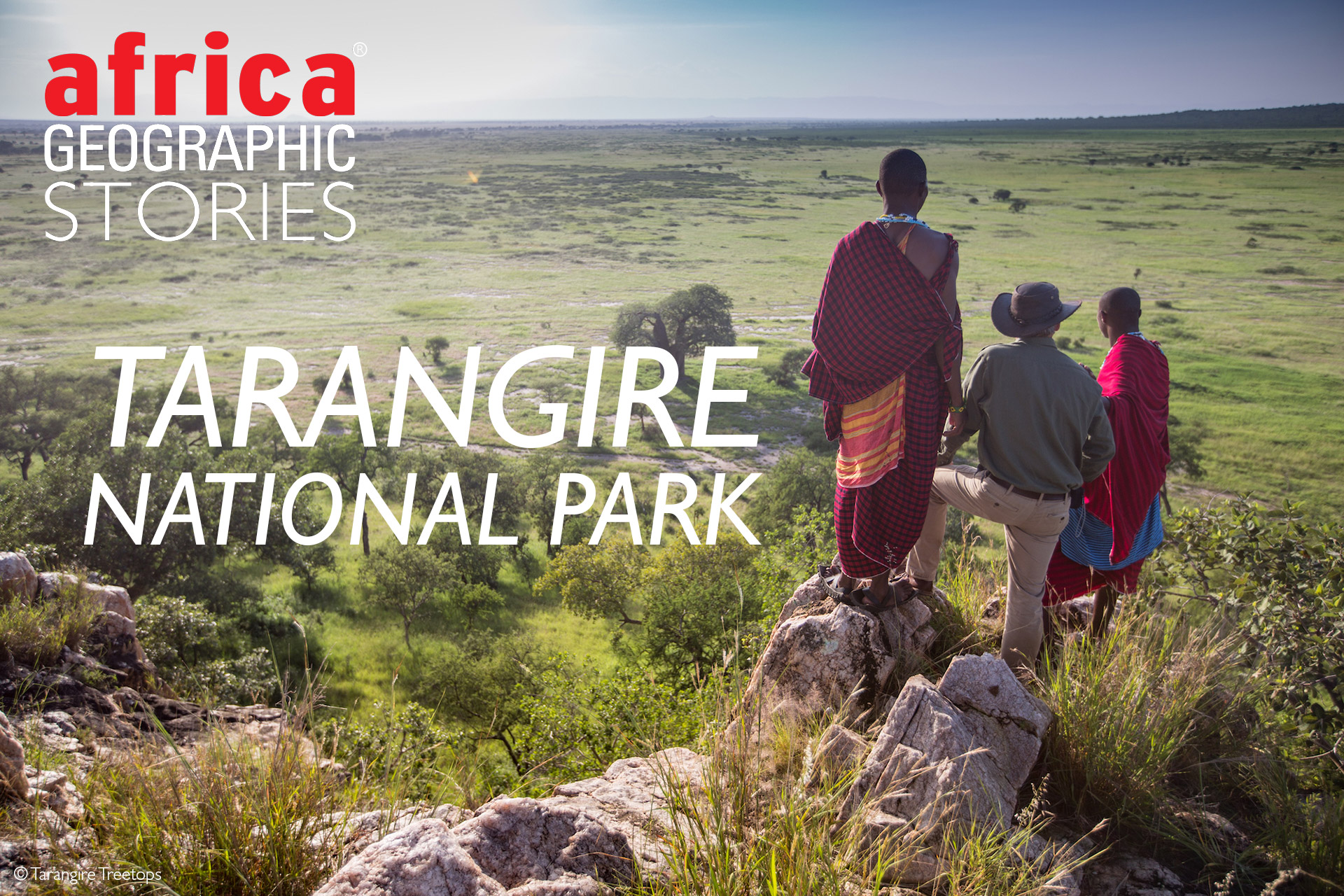 Serengeti wildlife, minus the crowds

Northern Tanzania’s safari scene is dominated by the Serengeti and neighbouring Ngorongoro Crater. There are many good reasons for this – sightings are reliable, especially when the Great Migration is passing through, and the scenery is breathtaking. Yet there is a third, often forgotten, national park in the northern circuit: Tarangire National Park. Tarangire is a place of giant baobabs, fever tree forests, shimmering swamps and sweeping vistas, where wildlife roams in abundance. In this region, travel is still infused with the true romance of an African safari. 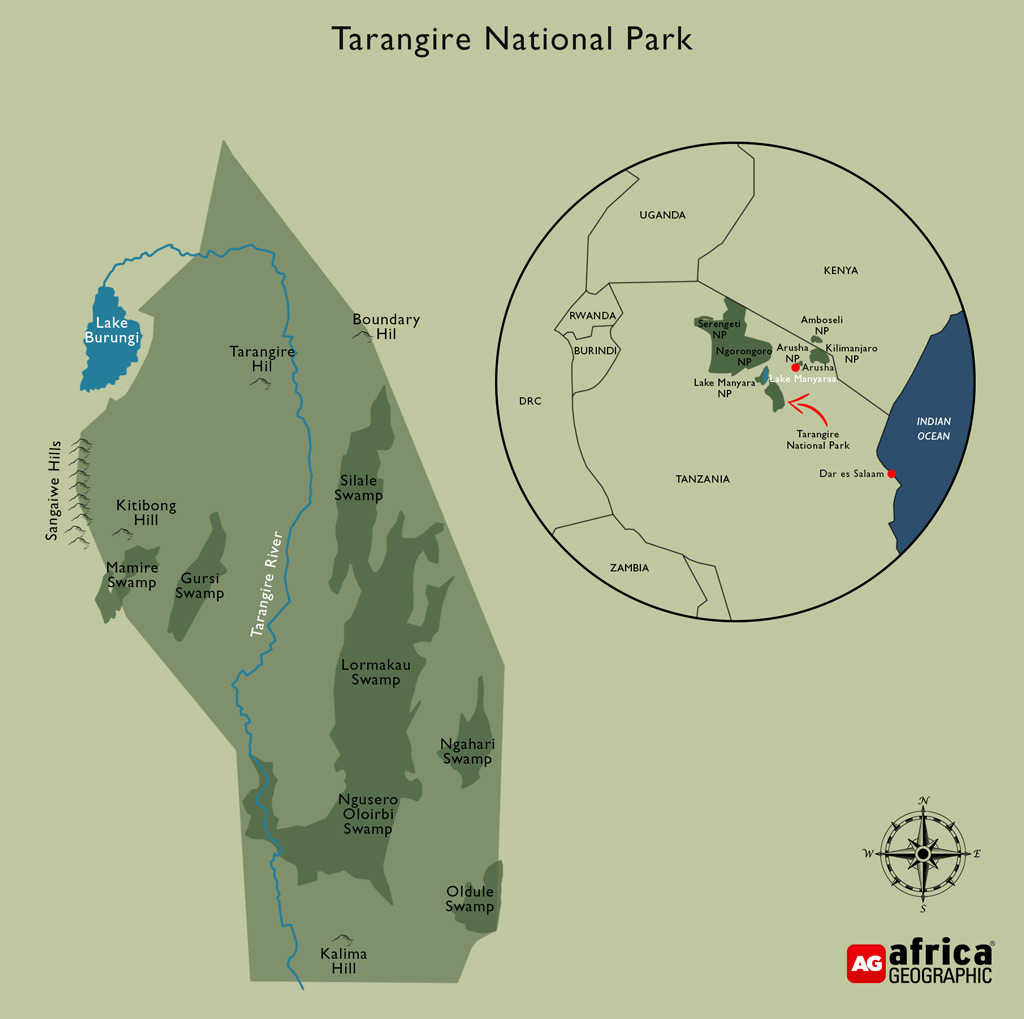 Situated in Tanzania’s Manyara Region, just southeast of Lake Manyara National Park, Tarangire is just over 100km from the city of Arusha. This makes it easily accessible for travellers en route to the Serengeti National Park and Ngorongoro Conservation Area, situated further west. The national park extends over 2,850km2 (280,500 hectares), but the land available to wildlife is expanded by Game Controlled Areas, conservancies, and the Tarangire Conservation Area. Here, people and wildlife exist side-by-side. Several luxury lodges operate in these concessions on the park’s fringes, allowing their guests to experience both the park and the increased freedom away from its confines – by offering night drives, for example.

From the Tarangire River in the north, rolling hills give way to vast swamps. These soak up the rain like sponges and maintain a tinge of green, even during the dry season. Away from the watery marshlands, the landscape is dotted with granitic ridges, red-earth termite mounds and sparse whistling thorn (Vachellia drepanolobium) woodlands. Throughout, bulbous baobabs (Adansonia digitata) impose themselves upon the backdrop, dwarfing even the enormous herds of elephants that forage around them.

Life in the northern section of the park (in terms of lodges, campsites, and wildlife) revolves around the sinuous bends of the Tarangire River. This geographical feature plays a pivotal role in Tarangire’s most remarkable natural phenomenon – the Tarangire migration. Though not involving the same wildlife numbers as the famous Great Migration, Tarangire’s migration is arguably equally sensational given its strict seasonality and the exceptional variety and densities of wildlife.

The park is part of an enormous ecosystem that includes Lake Manyara, the Maasai Steppe, and the area from Lake Natron to Mount Kilimanjaro. Every year during the dry season, the Tarangire River becomes one of the only available sources of water, and tens of thousands of animals are drawn to its banks and floodplains from miles in every direction. These include several species of antelope, buffalo, giraffe and zebra. Elephants also arrive in their hundreds, and Tarangire is believed to have one of the largest elephant populations in Tanzania.

Elephants, elephants (and everything else) everywhere

Tarangire is an elephant enthusiast’s paradise. It is impossible to spend time in the park without encountering these iconic pachyderms, feeding at the base of a baobab, strolling through the riverine forests or playing in the mud of the marshes. They are often present in a conglomeration of herds that may number close to 300 individuals – an incredible sight for even the most seasoned safari-goer.

Elephants aside, Tarangire is home to one of the greatest concentrations of wildlife outside of the Serengeti ecosystem. The dry season influx of ungulates sees a profusion of wildebeest, zebra, gazelle, eland, hartebeest and buffalo assembled near the river, or around residual pools in the swamps. Such a concentration of prey serves to attract the attention of the park’s various resident predators – particularly the ever-attendant lions. The lions of the Silale Swamps are particularly renowned, not only for their marshy hunting techniques, but also for their habit of lounging in the boughs of trees, perhaps to escape the tsetse flies. Leopards and cheetah are also present, though less regularly seen, and even African painted wolves (wild dogs) come haring through the park on occasion.

Away from the wetter areas of the park, visitors may even be fortunate enough to spot a gerenuk or fringe-eared oryx, making Tarangire one of the few places in Tanzania to see these arid specialists.

For those able to tear their eyes away from the mammal life on display, Tarangire’s many varied habitats confer it the status of one of Tanzania’s top birding hotspots, with over 500 species recorded. From chattering flocks of yellow-collared lovebirds to stately ostriches picking their way across the plains, avid birders will find it a struggle to know where to look next. In contrast to mammal viewing, the best bird sightings are during the wetter months (November to May). This is when the swamps come into their own for waterbird watching, and migrant arrivals fill the skies. In addition, many dry-region bird species such as vulturine guineafowl and northern pied babbler are present at the margins of their ranges. Enthusiasts can while away the hours searching for the drab but sought-after endemic rufous-tailed weavers and ashy starlings, or search for the flash of colour signalling the arrival of the dazzling red-and-yellow barbets.

Like much of East Africa, Tarangire experiences two rainy seasons: the “short” rains in November and the “long” rains in April and May. However, heavy rainfall can occur any time from November until May, and many of the lodges and camps close down for the rainy season when the park becomes boggy and difficult to traverse.

Accommodation options in Tarangire National Park and surrounds range from public and private campsites to high-end luxury lodges. Naturally, Tarangire is at its best during the dry season, from July until October. During this time, concentrations of wildlife are mind-boggling, and, conveniently, this is also when tsetse flies are at their least active. Walking safaris at this time of year are as phenomenal as game drives, and the open habitats allow for comfortable and easy encounters with the larger wildlife species. For those looking to combine their trip with a chance to see the Great Migration, this is generally when the zebra and wildebeest begin to move north into the Maasai Mara in Kenya.

One of the major attractions of Tarangire National Park is that even during the tourism high season (June to August) when many of the parks throughout Africa are at their busiest, it remains one of Tanzania’s best-kept, uncrowded secrets.

Tarangire is often treated simply as a stop-over between the more popular destinations on Tanzania’s northern safari circuit. Yet those visitors who opt to explore this varied and fascinating national park are richly rewarded by one of Africa’s most underrated safari destinations. With magnificent scenery and an abundance of wildlife, Tarangire National Park has every ingredient needed for the perfect safari.