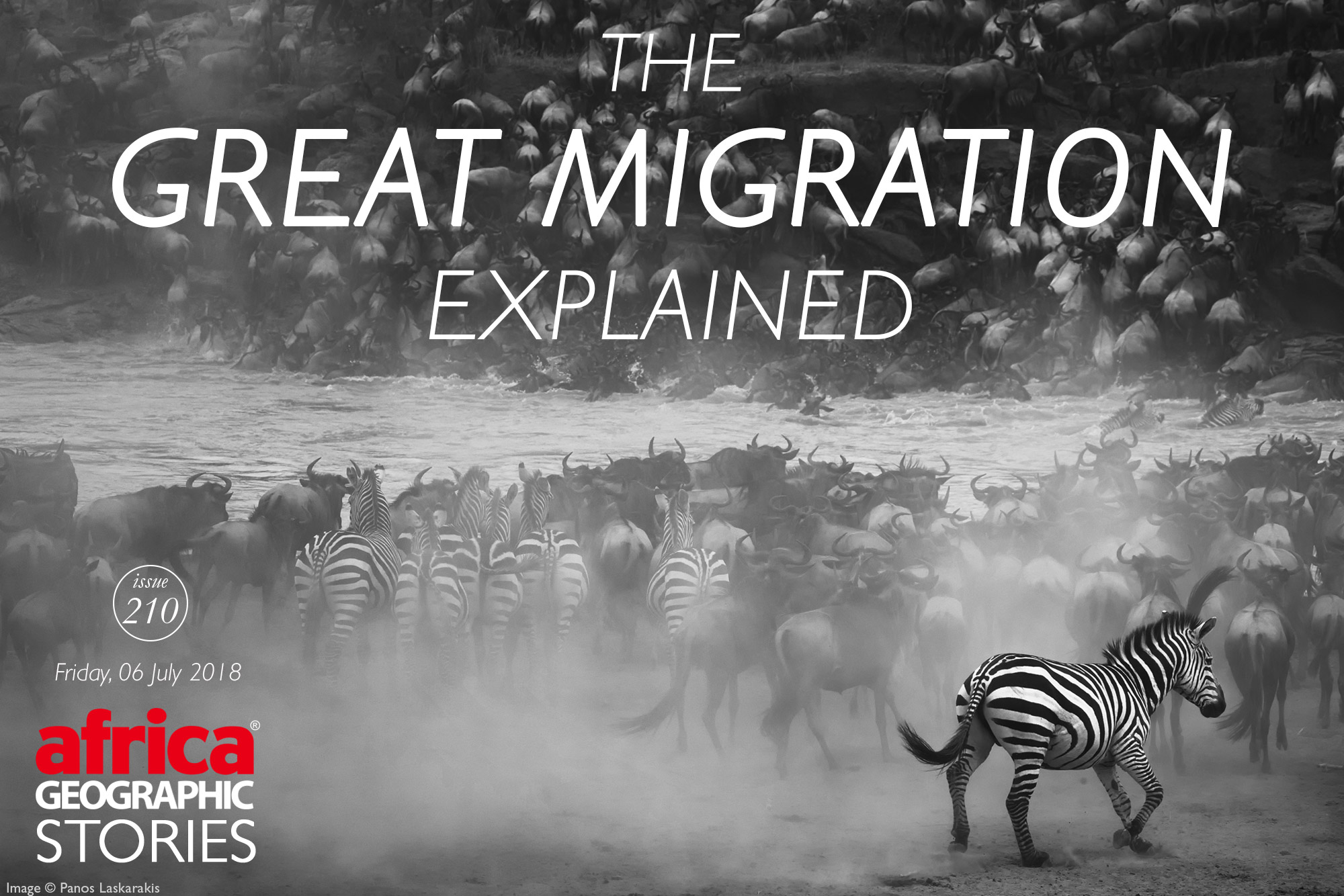 The Serengeti and Maasai Mara ecosystems see huge herds of wildebeest and zebras migrating in a continuous search for the best food and water. Although this journey follows a similar annual route, exact timing varies based on rainfall.

When the rains beckon, the wildebeest go. In spite of the big cats in waiting, or the rivers thick with crocodiles, they diligently follow their inner compass in a never-ending circular journey.

The Great Migration is the largest overland migration in the world, with wildlife travelling a total of 800 km or more during each cycle. The magnificence of the event lies in its magnitude. Between 1.5 to 2 million wildebeest, zebras and other species plod or canter across Tanzania’s Serengeti and Kenya’s Maasai Mara in search of good grazing. And if you are lucky, you get to go along for the adventure.

The herds move in a clockwise direction, up from the south of the Serengeti, through the Ngorongoro Conservation Area, the Loliondo Game Controlled Area, and the Grumeti Reserve. They then leave Tanzania briefly to spend time in the Maasai Mara in Kenya, which borders Serengeti National Park to the north, before heading back south to start the journey again. Most of the migration takes place in the far larger Serengeti than in the Maasai Mara.

During the migration about 250,000 wildebeest and 30,000 zebra die every year as a result of predation by carnivores, drowning, thirst, hunger, and exhaustion.

And following the herds is another migratory species – human safari die-hards, who revel in the drama and magic of this, the Greatest Show on Earth. This is no cookie-cutter safari, as nature does not keep Swiss time, and even the well-documented river crossings are not predictable as to when and where. In fact, it’s the unpredictability that is the drawcard, and experienced travellers and guides know how to enjoy the many layers of bush life while waiting for the dramatic river crossings and predator action.

Rainfall drives the event, so tracking the herds is not an exact science, but the same general pattern plays out each year.

JANUARY:
It is the first rains in the southern Serengeti plains that beckon the herds to the Ndutu area. If you want to find the wildebeest in January, Naabi Hill and Lobo are the places to look. Many females in the herd are heavily pregnant at this point and moving towards greener grasses is of top priority.

FEBRUARY:
Every year half a million wildebeest are born on the Serengeti plains, and February is the month with the highest birthing rate, sometimes seeing as many as 8,000 born each day.

The abundant new grass makes the area around Lake Maek and Lake Ndutu the ideal place for the wildebeest to give birth. The herd will stay put for a while in the southeast Ndutu area after the calves are born, before heading up north in a clockwise direction.

Calving season means adorable wobbly babies finding their legs – a bonus for predators, who do not play nicely. If you want to see a wildebeest just hours old, your best chance is to go out at midday when they typically give birth, to allow the babies the time to gain strength before nightfall.

The Serengeti also boasts a particularly healthy lion population, with over 3,000 lions in the reserve. This is of considerable significance when you realise that these big cats face a bleak future across the African continent.

MARCH:
The mobile camps in the Serengeti provide an up-close and personal experience of the migration. You can find the herds in the Ndutu and Kusini Maswa region, in the southwest of the park. Having the babies in tow means they move a bit slower. And be prepared for some afternoon rainfall in March.

APRIL:
If you visit in April, you are going to need your rain jacket. The herds amble from the Ndutu region, past the Simba kopje, in the direction of Moru. The herds have now split into large groups, rather than the massive concentrations that stretch as far as the horizon.
Simba kopje is where the lions are at, and it’s worth spending some time lion hunting – in the strictly photographic sense of the word. The wettest part of the day is the evening. The rainfall makes the plains slippery, and vehicles without 4×4 mode will battle to go anywhere.

MAY:
For those wildlife photographers looking for action shots, set your sights on May in the Serengeti. The ‘long rains’ keep on going throughout the month. And as the calves get bigger and stronger, the distances the herd covers get longer. You’ll most likely find them between Moru and Mokoma, moving towards Lake Magadi.

JUNE:
By June the rains have abated somewhat, and the herds have spread out. The front-runners reach Mbalageti River around this time. While those bringing up the rear could still be as far back as Lake Magadi or in the southernmost corner of the Simiti and Nyamuma Hills. The herds are now often in long lines as they head north.

JULY:
July is mating season in the Serengeti. You can find the herds in the Grumeti Reserve, in the west of the Serengeti, and moving past Fort Ikoma. Crossings of the Grumeti River are worth hanging around for, but the Serengeti is vast and relatively under-developed with lodges, so river crossings are harder to find.
Also, the Grumeti River does not have the volume of water that the Mara River has, and the crossings are not as spectacular. The herds graze their way northward, as they move toward the Maasai Mara in Kenya. This is a transborder event.

AUGUST:
Come August and the herds have made their way up to the northern Serengeti, and face their biggest challenge yet: the Mara River. This fast-moving river flows through the Maasai Mara into the Serengeti. And while the gushing murky waters are captivating, they are also possibly responsible for the highest death toll en route, killing many thousands of wildebeest. Watch this dramatic video of a Mara River crossing.

Sometimes the herds plunge en masse off steep banks in their desperate attempts to get across the river, or after being spooked by lions, and the fall alone will kill many individuals. Others drown as they are crushed by the sheer volume of panicking wildebeest trying to scramble up the equally steep banks on the other side. Every death means dinner for crocodiles, birds and fish – such is nature’s bounty.

And amidst the panic, the dust and the noise, the big cats and hyenas pick off the stragglers and the injured. Be warned that aside from the massive herds, the river crossings also attract large volumes of tourists, who congregate at strategic points to witness this spectacle.

There is no class system here, as privately-guided wealthy couples in open Land Rovers jostle for the best views with budget back-packers crammed into mini-vans with pop-up roofs.

SEPTEMBER:
You can catch the tail end of the Mara River crossing or go see the herds out in the vast open plains of the Maasai Mara, where they are like flies in places. Pack your hat, because the weather will be hot and dry.

OCTOBER:
October offers a scene of casual grazing in the Maasai Mara. The push is over, and the fresh grass is the reward. For the survivors, that is.

NOVEMBER:
What is known as ‘the short rains’ begin in November, triggering another move, as the herds leave Kenya and south to western Loliondo and the Lobo area in Serengeti National Park. Whether it rains in November or not, is nature’s call. But pack some extra jerseys for the cooler weather. At this point, the herds organise themselves into smaller family groups and get on with the serious business of grazing.

DECEMBER:
By December the herds are back in the south of Serengeti, and the first act begins all over again.

When people say they’ve come to see the migration, they really mean they have come to see the river crossings. Watching the wildebeest hurl themselves into the water, one after the other, in a flurry of panic, sends a surge of adrenalin through the most seasoned bush-junkie. Watch this dramatic video of a Mara River crossing.

The river crossings are the scenes we’ve all watched on Planet Earth – the chaotic clamber of wildebeests, zebras and a few antelope species across turbulent crocodile-infested waters. And then, of course, you have the lions and leopards waiting amongst the riverine shrubs to ambush unsuspecting victims. For those of us with limited time and rudimentary camera equipment, it can be challenging to capture the full impact of thundering hooves, the frantic urgency to get to the other side and the drama of predations. Sometimes the best strategy is to put the camera down and simply watch and absorb the drama playing out in front of you.

Avoiding tourists is somewhat of a sport in the Serengeti and Maasai Mara, particularly during the peak safari season. If you are the tourist who skips the Eiffel Tower and seeks out that artisan cheese store in the back alleys of Paris, then perhaps give the Mara River crossings a miss.

The rainy season, from late March to late June, offers up a less crowded Serengeti, as the herds move into the western part of the park. The mass of animals moving across the plains is captivating, but what you are really on the lookout for is a hunt. And the open plains give you prime viewing.

Moving away from the herds and following a pride of lions has its own bittersweet rewards. The predators face struggles of their own out on the plains: defending their territories, protecting their cubs, and nursing the battle wounds from a particularly hard hunt.

Just because it is the rainy season doesn’t mean it will rain. And if it does, it might not be a continual downpour. Again, the whims of the wild.
As a bonus, catching the lodge off-season means less pricey accommodation.

Avoiding tourists is more of a challenge in the Mara, the reserve is smaller and as soon as the herds arrive, so do the crowds. The trick here is to stay in one of the private conservancies bordering the reserve. They are close enough to make day trips to see the herds doable, and it means fewer crowds back at camp. These private conservancies can offer activities not permitted in the parks, such as night drives and bush walks.

Top tips for witnessing the Migration:

If you think about it, the wildebeest is a rather understated animal, zoomed past on most safaris to get to something ‘more exciting’. It’s nice that there is a show that puts them on the centre stage. And, with a bit of planning ahead, the front row seats are yours.

TRAVEL WITH AFRICA GEOGRAPHIC
Check out our preferred camps & lodges for the best prices, browse our famous packages for experience-based safaris and search for our current special offers.

ABOUT THE AUTHOR, NOELLE OOSTHUIZEN

Growing up watching Beverly and Dereck Joubert’s documentaries and idolising Jane Goodall, Noelle Oosthuizen has always dreamed of living in the bush. For now, she writes about her bush adventures from her home in Cape Town, South Africa. She has a particular soft spot for chacma baboons, and she advocates for these charming primates every chance she gets. By far her favourite adventure has been being a foster mom to an orphan baby baboon.