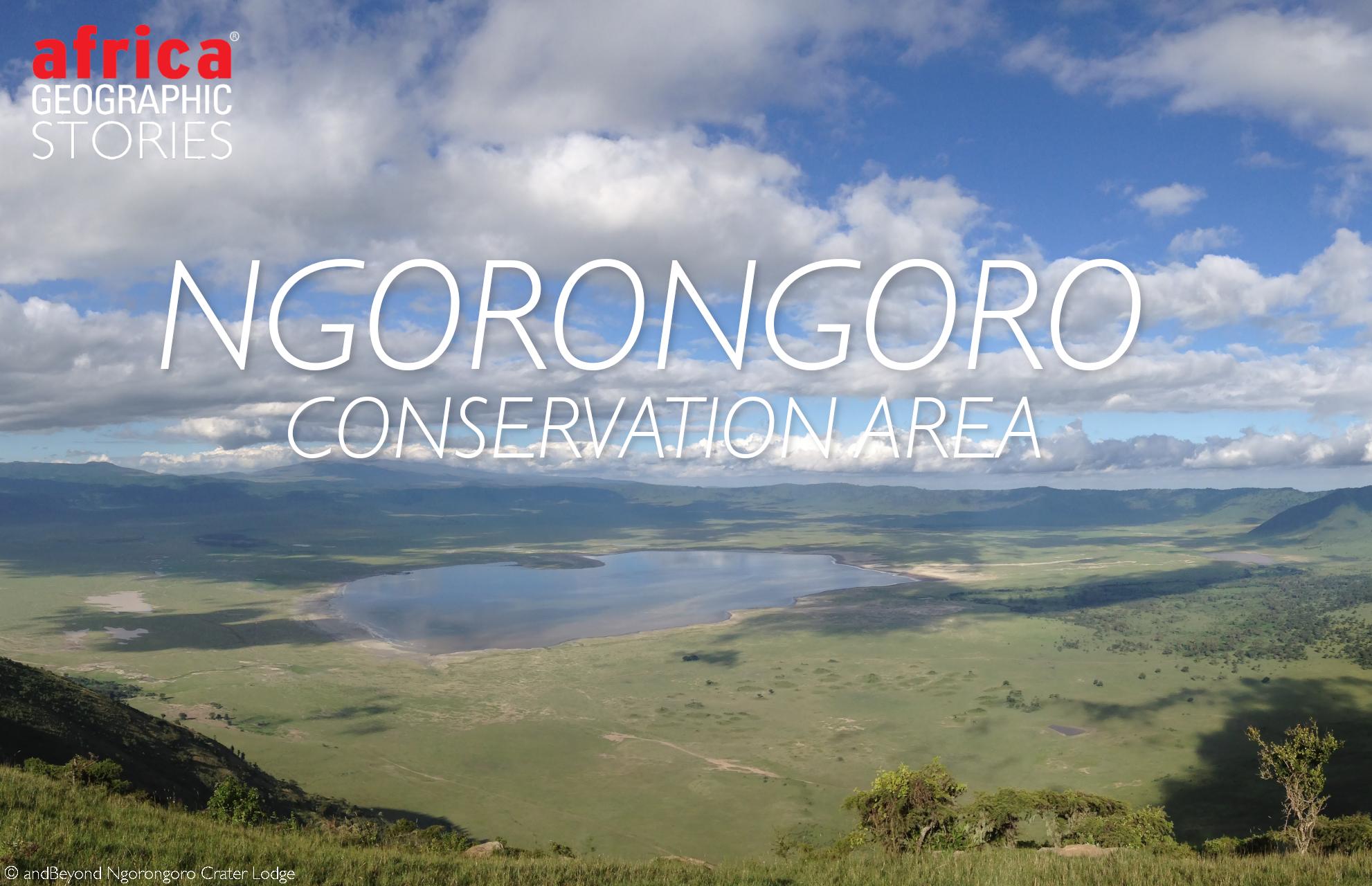 Africa's Eden - a land before time

Some two million years ago, a volcano roughly the size of Mount Kilimanjaro exploded dramatically and collapsed in on itself. Millenia later, its caldera’s ancient walls in what is now the Ngorongoro Conservation Area (NCA) are still intact, encircling and cradling one of the most biodiverse and precious wild spaces in Africa. The effect is almost cinematic, creating an impression of motionless time, sheltered and protected from the unrelenting advance of human development.

People and wildlife share the swamps, grasslands, forests, and savannas of the NCA in Tanzania; a spectacular wilderness that offers wild marvels, breath-taking scenery and complex insight into human history at every turn. 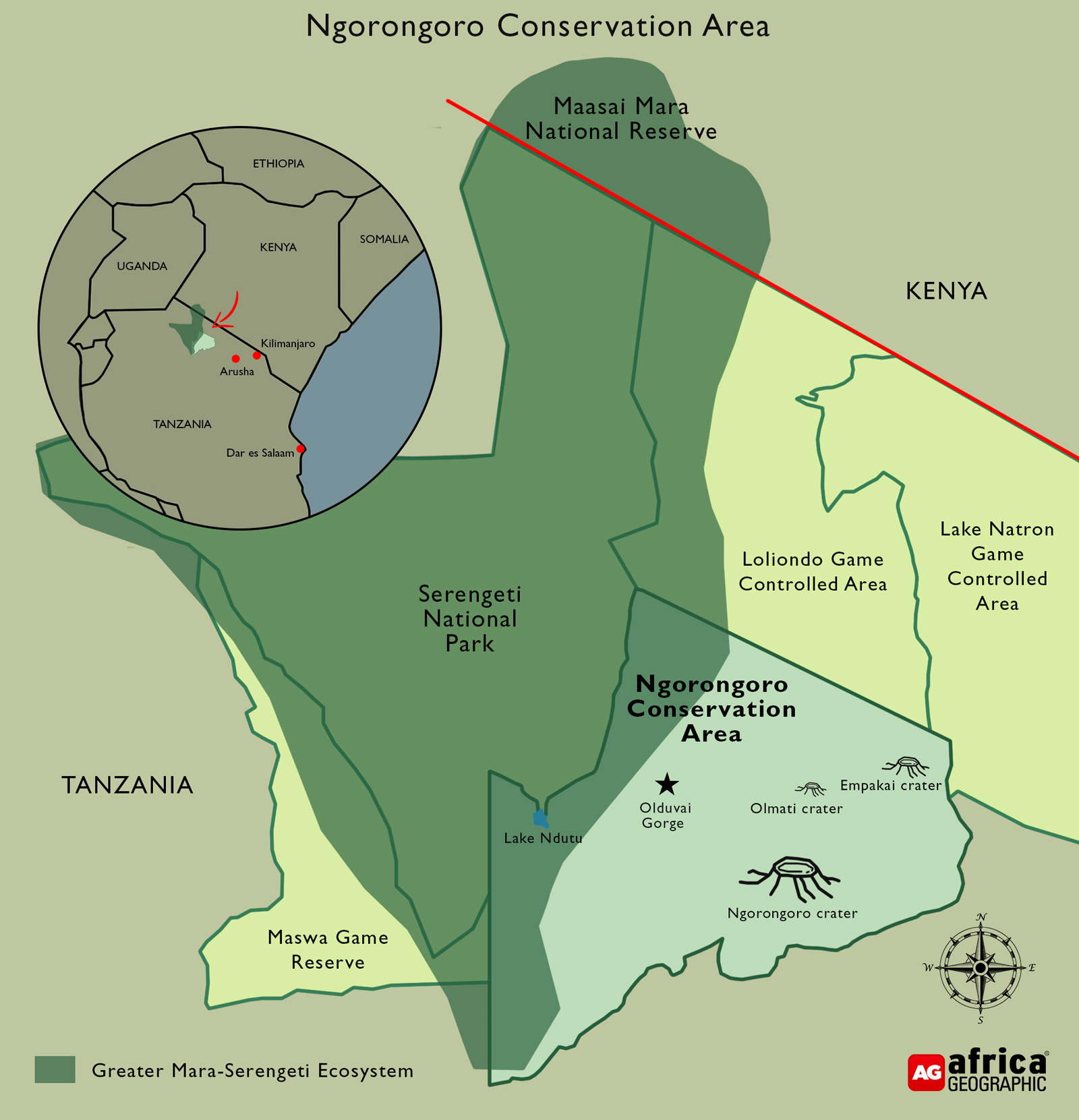 The NCA covers a massive area of 8,292 km² (829,200 hectares) in northern Tanzania. It is situated on the Serengeti National Park’s south-eastern boundary and is also contiguous with Maswa Game Reserve to the west, the Loliondo Game Controlled Area to the north and the Lake Natron Game Controlled Area to the north-east. It is part of the much larger Serengeti-Mara ecosystem and, while the Great Migration essentially follows a circular route, the northwest of the NCA is considered its starting point.

The Crater is the area’s flagship tourism feature, but the NCA also encompasses several smaller craters, forests, gorges, mountains, lakes, and wetlands in a smorgasbord of ecological variety. Wildlife aside, the secrets of humanity’s ancient histories are enfolded within Ngorongoro’s unique landscapes, and to many, this is the ‘cradle of humankind’. Some of the most famous paleoanthropological sites in the world are found in Olduvai Gorge, while Laetoli is home to literal footprints of hominid history.

Somewhat unsurprisingly, given the exceptional biodiversity and historical value, the NCA is a designated World Heritage Site. However, under Tanzania’s national law, it is neither a national park nor a game reserve. It is managed independently by the Ngorongoro Conservation Area Authority as a parastatal organisation.

In the mid-20th century, Ngorongoro was proclaimed part of the Serengeti National Park, but this was met with considerable backlash from local Maasai pastoralists, who had already been excluded from vast swathes of their homelands to make way for protected areas. Ngorongoro was born of a compromise between conserving history and biodiversity while recognising the value of the land to the Maasai people and neighbouring tribes. This unique multiple-land use area was the first of its kind in Africa, and the experiment has proved largely successful. However, burgeoning human populations have necessitated certain policy changes.

These Tanzanian conservation areas are recognised for their ecological importance, historical significance, cultural value and utility for traditional land uses.

At 264km2 (26,400 hectares), Ngorongoro Crater is the largest intact caldera in the world, surrounded by a heavily forested rim that rises some 2,300m above the grasslands below. The crater’s centre is dominated by the seasonal Lake Magadi (also spelt Makati), fed by the Ngoitokitok spring and the Munge River. Courtesy of a complex geological history, the alkaline lake is mineral-rich, and every year, lesser flamingos are attracted to its salty, shallow waters during the breeding season between October and December.

Given the extraordinary biodiversity, it is only to be expected that the wildlife on offer is equally varied and exciting. Almost all of Africa’s most iconic animals, including the Big 5 and beyond, shelter in this geological cradle. Visitors to the crater have the highest chances of seeing one of the region’s fabled black rhinos, which are otherwise notoriously difficult to spot. The crater’s black rhino spend their evenings hidden in the yellow-green fever-trees of the Lerai Forest but descend to the open plains during the day. Though hit hard by poaching in the last century, the numbers have been bolstered by translocated black rhino from South Africa, and each rhino is now individually monitored and protected.

The crater is also rumoured to be home to the highest lion density in Africa, possibly by creative marketing teams. Regardless of this speculation’s veracity, it is highly unusual to visit the crater without encountering Africa’s largest cat. Their fiercest competition, spotted hyenas, are also present in large numbers and are the subjects of a decades-long research project. Keep an eye out for these misrepresented predators lurking along the banks of Lake Magadi, waiting for the opportunity to charge through the shallow waters and snatch up an unsuspecting flamingo.

Olduvai (or Oldupai) Gorge is a steep-sided ravine, named for the Maasai word “oldupai”, which means the “place of the wild sisal” in reference to the plants which dominate. The archaeological research in Olduvai Gorge, nearby Lake Ndutu and surrounding sites, has yielded a timeline of our evolution as a species. It traces the progression from scavenging/hunting to stone tools and the eventual progression to iron. The scattered fossils, tools and bone fragments reveal the gradual development of communal societies and social complexities that would eventually define our successes (and failures) as a species.

Just 45km south of Olduvai, the discovery of several sets of footprints preserved for close to 4 million years settled the archaeological debate about whether bipedalism or large brain size evolved first. Famed archaeologist Mary Leakey and her team excavated the Laetoli footprints, which are tentatively believed to have belonged to Australopithecus afarensis. This discovery has been interpreted as proof that early hominids were bipedal long before the evolution of the human brain. Somewhat whimsically, the footprints were discovered by Andrew Hill, who was visiting Dr Leakey at the time. He dodged an elephant dung missile lobbed by a colleague, fell over and found himself staring at history preserved in solidified volcanic ash.

The footprints have since been covered over to prevent damage by erosion, and none of the active archaeological sites is open to tourist visitors. However, as one of the largest onsite museums in Africa, the Olduvai Gorge Museum offers curious tourists the opportunity to view the footprints’ casts and read about their interpretation. Founded by Mary Leakey in the 1970s, the museum sits on the gorge’s edge and showcases many of the paleoanthropological artefacts from the area.

While the geography and history of Ngorongoro are deeply fascinating, the main attraction for most is the spectacular wildlife – even beyond the crater.

From December to February, over a million wildebeest halt their almost ceaseless migration on the short grass plains of Serengeti and the Ndutu region of Ngorongoro to calve over a two week period. The resultant spectacle is a once-in-a-lifetime experience for dazzled tourists. Predators and scavengers of every description throw themselves into the wildebeest melee, dodging the sharp horns of defensive mothers to take advantage of the vulnerable calves. For Ngorongoro’s carnivores, this yearly glut increases their own offspring’s chances of survival while providing ample opportunity for inexperienced youngsters to practice their hunting skills. Fortunately, with over 8,000 calves born every day, it is not all death for the calves, and visitors can also soak up the joy of watching the wobbly, fawn-coloured calves find their feet and learn to run.

Quite aside from the adrenaline-inducing battles for survival, Ngorongoro is a paradise for keen birders. From the highland forests draped in orchids and lichen on the crater rim to the marshes and lakes below, the varied habitats of Ngorongoro make it a bird Eden for more than 500 species.

So many are the exciting opportunities for Ngorongoro visitors that an article covering the basics reads like a checklist. If there is a drawback to a safari in the Maasai Mara or Serengeti, each day is focussed on exploring the largely open scenery in search of the more conventional sightings, which can translate into a kind of safari overload. In contrast, a safari through Ngorongoro can be interspersed with the many diversions and learning experiences.

For example, the Ngoitokitok spring is a popular picnic spot with visitors. Lunch can be enjoyed to the serenading of grunting hippopotamus bobbing about in the pool below the spring. Alternatively, the two smaller craters, Olmoti and Empakaai, can be explored on foot with an experienced guide and official NCA ranger. Not far from Olduvai Gorge, the gneiss inselberg of Naseru Rock protrudes sharply from the plains, and a trip to the neighbouring Lake Natron Game Controlled Area will allow visitors to see Ol Doinyo Lengai (“The Mountain of God”), an active volcano whose recent rumblings suggest that eruption is imminent. And while the craters are often bursting with eager tourists, the geologically fascinating Gol Mountains are more remote and less crowded for the adventurous traveller.

There are high-end lodges dotted about the Crater’s rim and surrounding areas, sporting spectacular views and luxurious facilities for the discerning (well-healed) tourist. July to October and December through until January are the area’s busiest tourist seasons. Still, the entire region is spectacular at any time of the year, and budget-strapped visitors can take advantage of the less expensive camping options during the quieter seasons.

Some 3.5 million years ago, a trio of our hominin ancestors took a stroll through some soft volcanic ash towards the local waterhole. They left behind a powerful reminder of our ancient, varied human roots. One can but wonder at the lives experienced by the people who left their footprints in the ash.

In many ways, this legacy has continued in the NCA. The multiple-land use policy recognises the intimate connection human residents have to land and its creatures. For tourists, the NCA presents an opportunity to dive back and reconnect with history, wild spaces and animals against the primordial backdrop of breath-taking Ngorongoro.