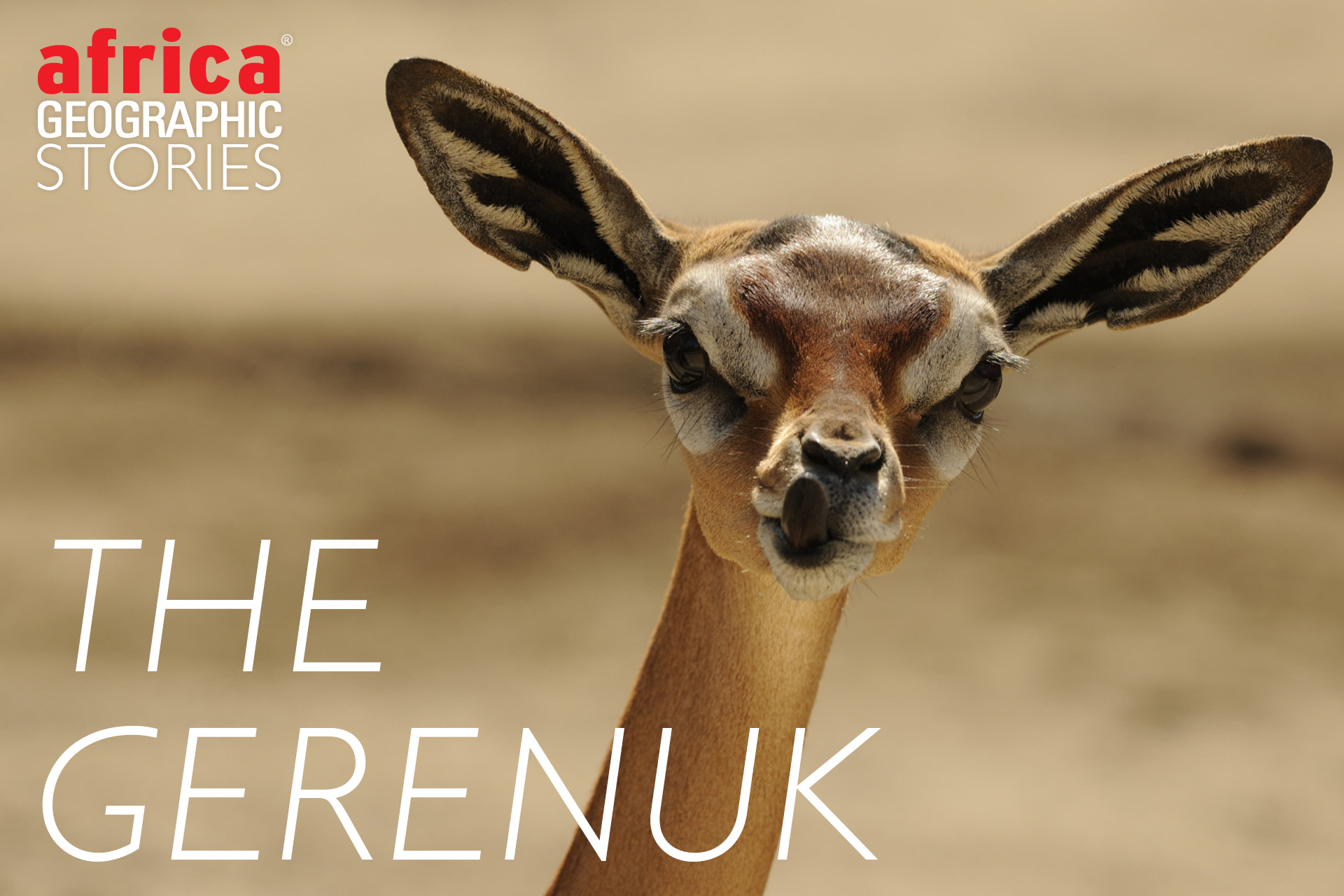 Africa boasts an impressive collection of over 70 antelope species. Some, like sable and gemsbok, are stately and proud. Others, like impala and springbok, are elegant and graceful. Bongo, kudu and nyala are drop-dead gorgeous, and the little duikers are indisputably cute. And then there is the gerenuk… 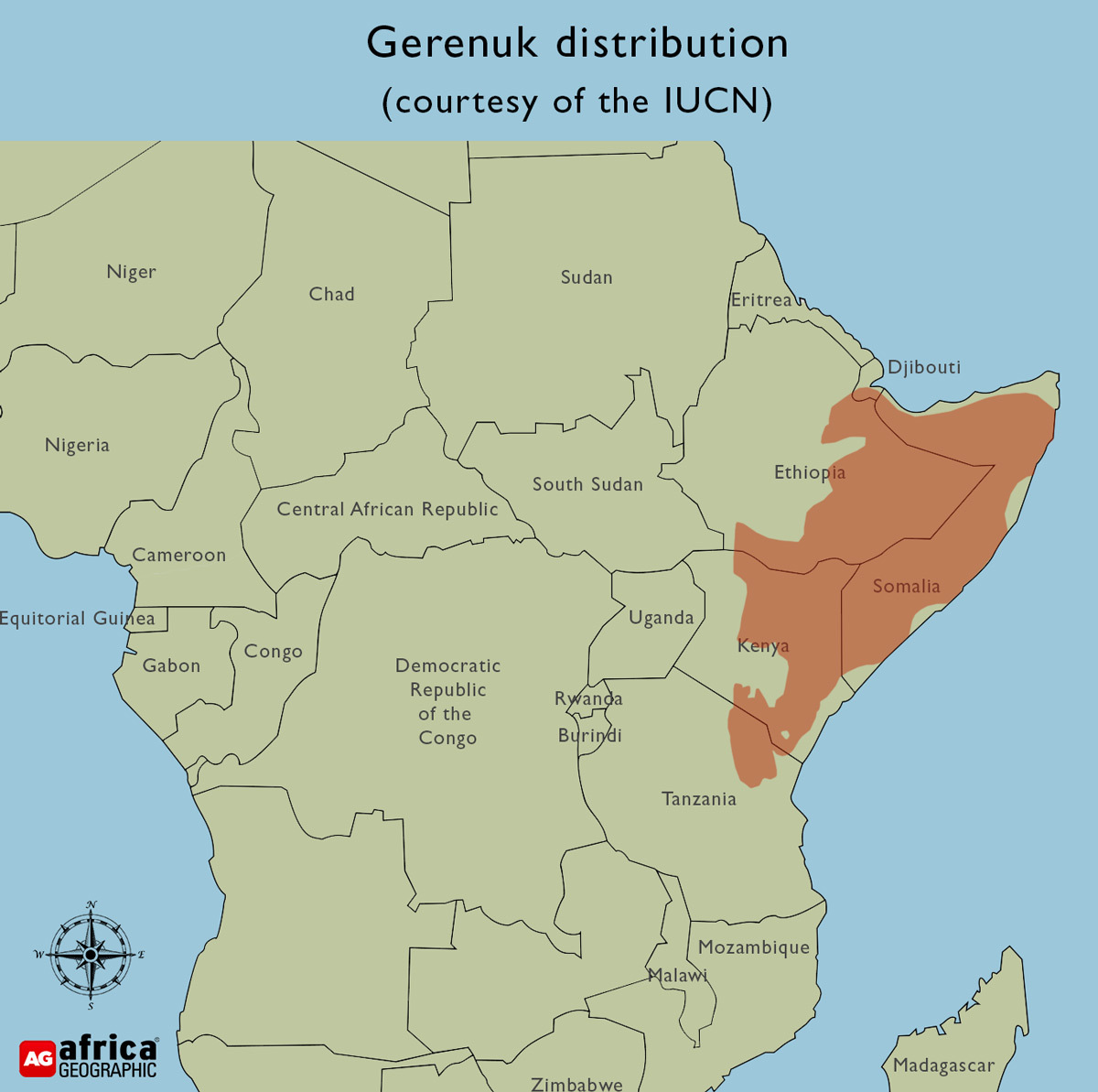 It’s probably somewhat unfair to label the gerenuk (Litocranius walleri) strange or weird-looking. After all, we are perfectly happy to accept a five-ton animal with a prehensile nose or one that stands over four metres tall and has a purple tongue. Perhaps it is simply a matter of exposure – gerenuk very seldom have a starring role in nature documentaries, nor do they feature heavily in artistic photographs of Africa’s wildlife in all its glory. Yet, there is something captivating about the gerenuk that draws the eye and makes it difficult to look away. They are, for want of a better word, goofy.

Gerenuk seem, for all the world, as though some cosmic power took hold of an impala and stretched it vertically without adding any proportional width. Their necks are absurdly long, and this, combined with the unique ability to balance on slender hind legs unsupported, allows them to feed at heights of over two meters. To complete this bizarre image, they have disproportionately small heads, which only serve to make their eyes look enormous.

The name gerenuk comes from the Somali name for the animal: gáránúug.

Unravelling the exact genetic relationships between antelopes is devilishly complex and very much a work in progress. With the advent of improved genetic sequencing techniques, genetic evidence regularly contradicts what appears to be obvious morphological similarities. We know that despite the similarity in looks and colour, gerenuk are not closely related to impala at all.

Instead, gerenuk belong to the Antelopini tribe, which includes the true gazelles (like the Thomson’s gazelle). They are also the only member of the genus Litocranius. Bizarrely, within the Antelopini tribe, the gerenuk is related to the springbok, though the two do not overlap in range at all. While springbok are confined to the drier parts of Southern Africa, the gerenuk is spread across the semi-arid areas of northern Tanzania, Kenya, Djibouti, Ethiopia and Somalia. Across parts of this range in Somalia, the gerenuk is sympatric with another antelope called the dibatag or Clarke’s gazelle (Amoodorcas clarkei), which may be their closest relative. This has yet to be genetically confirmed, and, while the two are placed in separate genera, they are almost identical but for their horns and facial markings.

How the gerenuk got its neck

It is a great shame that Rudyard Kipling, in the bedtime tales he told his daughter, did not alight upon the gerenuk as a possible protagonist because it is perfectly suited for a fanciful tale about how it came to look the way it does. Indeed, such a tale might provide a useful starting point because, in truth, we still don’t fully understand the process. Long necks have evolved independently in several extant (and many extinct) species, from dinosaurs to their living relatives (like ostriches) and from giraffe to the gerenuk, inspiring many a theory on their origins.

The apparent answer offered to most of us in school biology lessons on the giraffe is that long necks allow for access to juicy leaves above the reach of other competitive browsers. Unfortunately, life (and, by extension, evolution) is seldom this simple. Scientists have offered up several competing theories that have turned the giraffe’s cervical region into an icon of evolutionary biology. As it turns out, long necks have several useful functions, including fighting, watching for predators, and thermoregulation. And of course, the long neck may have evolved for one reason but conferred several advantages later on.

As for gerenuk, their curious bipedal predilection suggests that in their case, a mouthful of fresh leaves was evolution’s ultimate goal. Not only are their top two cervical vertebrae modified to prevent sub-luxation (in other words, a serious crick in the neck), but their lumbar vertebrae are also designed to aid their balance, as are their wedge-shaped hind hooves. Though most people are simply taken aback by the sight of an upright antelope, a closer look also reveals a supportive set of gluteal and thigh muscles that would make even the most avid cyclist jealous.

Peering at the neighbours

Adult male gerenuk are territorial and solitary, generally only associating with the females that wander into their range. These territories are habitually marked by a viscous black secretion from the preorbital glands. The females are somewhat more social but generally only form small herds of fewer than six individuals. Their associations are temporary, and solitary females are a common sight.

Interestingly, despite their preference for dry habitats, the females do not seem to have a seasonal oestrus period, and they can breed throughout the year. As with all antelope, the fawns are born precocial and can stand on wobbly legs as early as 15 minutes after birth. Adorably, records from hand-reared and captive fawns show that they will start trying to balance on their hind legs from as early as two weeks old. Wild gerenuk mothers typically hide their fawns in dense vegetation for up to four months, returning every morning and evening to suckle them.

By a year old, the young are fully independent of their mothers. At this point, male offspring will occasionally form bachelor groups with other sub-adults for another two years until fully grown and capable of fighting for and defending a territory.

Unlike their Thomson’s gazelle cousins, gerenuk are reluctant runners, relying on their keen senses and surprising ability to melt into the background. When facing a predator, they will trot away or adopt a “stotting” behaviour, a high-kneed, stiff trot. A full gallop is generally reserved for emergencies, and even then, the gerenuk only reaches top speeds around half of that of a springbok or Thomson’s gazelle. This sedentary lifestyle also helps them to conserve water.

Where to find them in the wild?

Gerenuk prefer thornbush, avoid dense thickets or open grasslands and their densities increase in dry regions where competition with other browsers is reduced. They are perfectly adapted to survive in even the driest areas and can go for months, if not years, without drinking. The moisture that they require is drawn from selective browsing. Like most arid-dwelling animals, their kidneys are well designed to reduce water loss by concentrating their urine, and specially designed nasal passages minimise evaporative loss.

Current estimates suggest that there are fewer than 100,000 gerenuk left in the wild, and their numbers are decreasing, prompting the IUCN to change their conservation status to “Near Threatened” on the Red List in 2008. This is expected to change to “Vulnerable” in the not-too-distant future, particularly as density information from Somali is scant but unlikely to be positive. Habitat degradation and unsustainable hunting are responsible for at least a 25% decline in numbers over the past two decades.

Fortunately, their numbers remain stable in most protected spaces across their range. A visit to Kenya’s Samburu and Meru regions will guarantee sightings of these dainty antelope, and they are also found in scattered numbers in Amboseli, Lewa and the parts of Tsavo. In Tanzania, they are reasonably common around Lake Natron.

Consider this special Kenya safari offer to see gerenuk and other dryland specialists: Maasai Mara and Samburu – 7 days for US$3,640 per person sharing

Check out our collection of camps and lodges where you could find gerenuk (search by the likely areas listed above): private travel & conservation club. If you are not yet a member, see how to JOIN below this story.

These tiny “giraffe gazelle” are decidedly endearing and, yes, even comic. But once you get used to the somewhat alien appearance of the unique gerenuk, you start appreciating that they are genuinely one of Africa’s most wondrous creations.