In northern Tanzania lies a world-renowned wilderness so expansive that the original inhabitants, the Maasai people, named it as a “place where the land runs forever”.  A land synonymous with the very essence of an African safari, where the magnificence of the scenery and the expansive atmosphere is matched only by the quality of wildlife viewing. This is the Serengeti, named for the Maa word siringet – the perfect combination of sweeping grass plains, rocky outcrops, leafy woodlands and fertile, volcanic soils for the region’s populous herbivores and well-fed predators.

In the Serengeti ecosystem, the land really does seem to run forever – at roughly 31,667km² (almost 3,2 million hectares) of protected area, it covers a large portion of Tanzania’s north-western corner. It is so vast that it dwarfs the contiguous ecosystem of the Maasai Mara by a factor of ten.

The northern-most stretches of the Serengeti National Park merge across the international border of Kenya into the Maasai Mara, creating a vital East African ecosystem (more on that later). To the west lie the Grumeti and Ikorongo Game Reserves, south is Maswa Game Reserve and east is the Loliondo Game Control Area. Nestled to the southeast is the ancient caldera of Ngorongoro Crater and the surrounding Conservation Area. To the east of Loliondo looms Ol Doinyo Lengai, literally translated as “the Mountain of God”, one of Africa’s few active volcanoes; and one of many that have played a role in shaping one of the most abundant wildlife ecosystems in Africa. 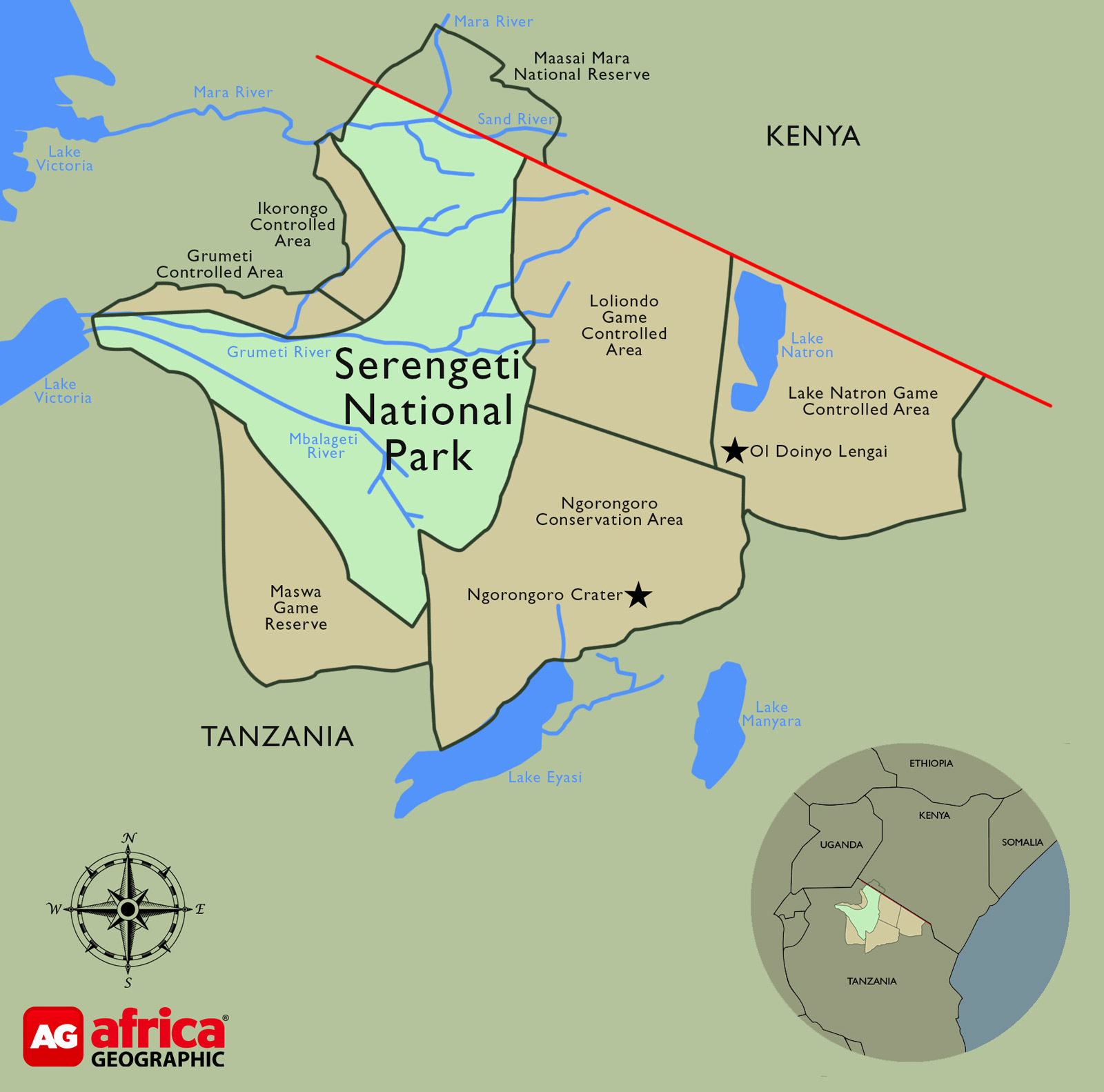 Under Tanzanian laws and policies, there is a historically complex distinction between National Parks, Game Reserves, Game Control Areas and Conservation Areas.

National Parks are afforded the highest levels of legal control over human activity and habitation within the park and are managed by the Tanzanian National Parks Authority, TANAPA. Game Reserves are similarly protected but are managed by the Tanzania Department of Wildlife with regions set aside for hunting. Game Control Areas allow for the use of land and resources other than for conservation and tourism reasons – including human residence, cultivation and the keeping of livestock.

Conservation Areas are areas of land recognized not only for their ecological importance but their historical value as well. Managed by its own specific Authority, the Ngorongoro Conservation Area is a designated World Heritage Site and is, quite literally, home to some of the footprints of human/hominid history. The archaeological research in Olduvai gorge and Lake Ndutu has yielded a timeline of our evolution as a species and traces our transitions right through to the use of stone tools and the eventual progression to iron.

The combination of National Parks and Game Reserves, together with the less restricted forms of land use accounts for the protection of around 80% of the entire Serengeti ecosystem. 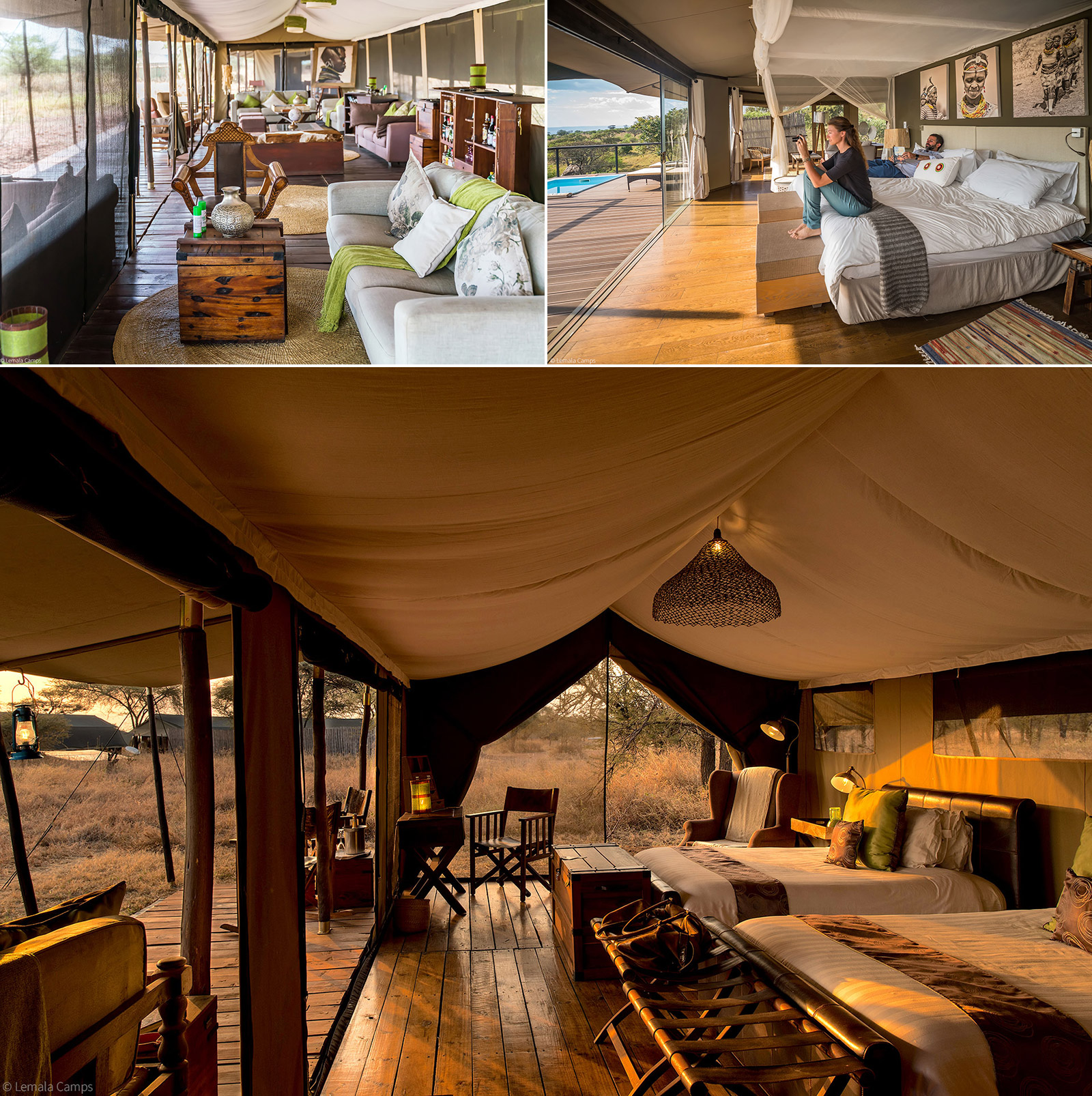 The Serengeti-Mara ecosystem is home to the Great Migration – the largest overland migration on earth, and for the majority of the year, the herds are moving through the Serengeti itself. In February, the short grass plains in the southern section of the Serengeti National Reserve provide the perfect birthplace for hundreds of thousands of white-bearded wildebeest calves. Those that survive the attentions of the many predators will begin their life-long, roughly circular journey spanning the two countries with over a million other wildebeest. As the calves grow, they can cover more ground, and the herds flow north through the Grumeti Game Reserve and surrounding areas, eventually crossing into the Maasai Mara around July, before looping back into Tanzania around October.

Nothing can truly convey the experience of sitting in the middle of the migration, surrounded by animals as far as the eye can see. The wildebeest are constantly vocal, with grunting contact calls interspersed with what can only be described as the desperate sound of the males trying to further their genetic future. The background cacophony is a permanent soundtrack to the spectacle of the Great Migration.

While the migration is known for multitudinous hunts and dramatic river crossings, there is also a strangely comic aspect for those that have the patience to sit and watch the more “ordinary” wildebeest sightings. Few would describe the white-bearded wildebeest as great thinkers of the animal kingdom, but the calves are always playful, despite the seemingly precarious nature of their very existence, and the mating season is hilarious. A male will gallop off in pursuit of a potential opponent, and after a (usually) brief clash of horns will return to where he left his females only to find that they’ve wandered off, at which point he looks dejected for a short time before galloping off to start again. The smell completes the sensory extravaganza that is the migration – a combination of leather, grass and cow with a hint of something sharp that might, metaphorically, be described as the scent of panic.

Quite aside from the huge herds of wildebeest, zebra and various antelope species that find themselves caught up in the migration, the Serengeti thrums with life throughout the year. Big cat sightings are a certainty: lions pose majestically on picturesque kopjes, leopards seclude themselves in the boughs of huge sausage trees and cheetah stretch out to their full stride through the golden grass. The sheer openness of the plains dwarfs elephant families, and large herds of buffalo stare down their noses at passing safari vehicles. A fortunate visitor might even spot one of the black rhinos that were brought in from South Africa to boost the population in the Serengeti.

The rainfall patterns are very similar to those of the Maasai Mara, with seasonal rainfall peaks in November/December and April/May. As in the Maasai Mara, the volcanic history of the area means that when it rains, the soils in certain areas become boggy, but the relevance of the timing of the rains extends beyond weighing up the chances of getting stuck. Tsetse flies are present in the Serengeti all year round, but their numbers increase significantly during the summer months and rainy season. The guides know how to avoid the pockets of tsetse flies, but wearing neutral clothing will help to avoid attracting attention.

Endless plains and beyond

It is no exaggeration to say that a visit to the Serengeti ecosystem is essential for avid safari-goers. The vast space and relatively low lodge density mean that for the most part, you can experience the spectacular scenery and wildlife in relative peace. Naturally, the river crossings in the north and birthing in the south attract large numbers of visitors and sightings can be quite busy at times. And yet the vastness of the Serengeti translates into plenty of opportunity for privacy and wilderness, even during the busy tourism months.

Shaped by volcanic forces and fed by numerous river systems, there is something primordial about the boundless plains of the Serengeti and the ceaseless movements of over a million animals driven by the search for sustenance. History, both ancient and recent, has created one of the most spectacular wilderness ecosystems on the African continent.