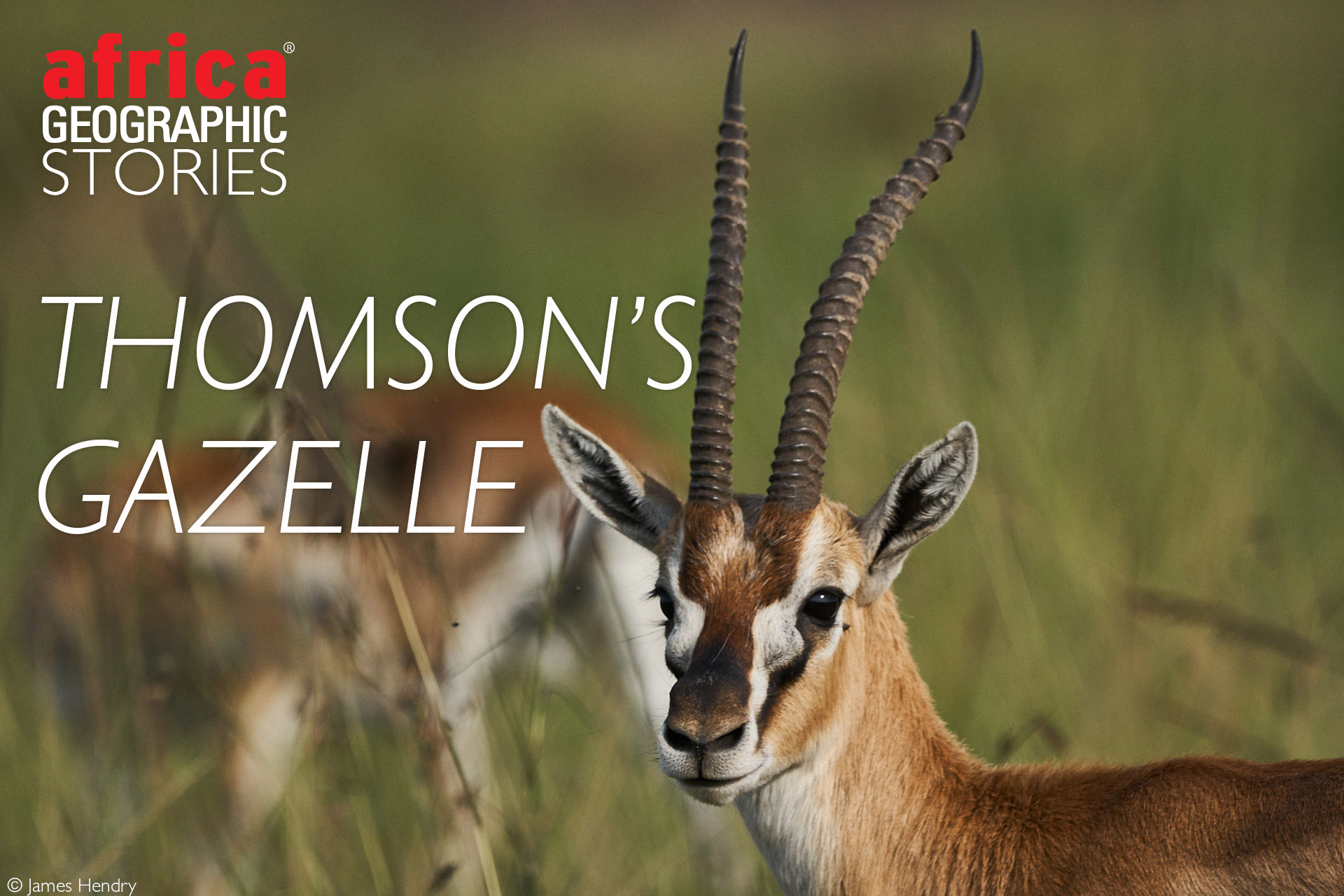 Somewhere on the plains of the Serengeti, a cheetah sprints after her terrified prey. It is a magnificent sight as muscles bunch and release, propelling her at speeds around 100km/hour. Yet there is a largely overlooked element to this evolutionary equation: the terrified Thomson’s gazelle staying just ahead at every turn, jinking and dodging until its pursuer runs out of steam. The sheer magic of the little gazelle’s athleticism is often overlooked in the excitement of a big cat sighting.

Across the Mara-Serengeti ecosystem, tourists flock to admire the hordes of wildebeest and zebra and the predators that plague them. The Thomson’s gazelles that dot the grasslands do not attract the same enthusiasm. Even the term “gazelle” is widely misunderstood and misused. Indeed, lots of people still consider the name to be a blanket term for antelope. In actual fact, while all gazelles are antelopes, not all antelopes are gazelles, but we will address that later. 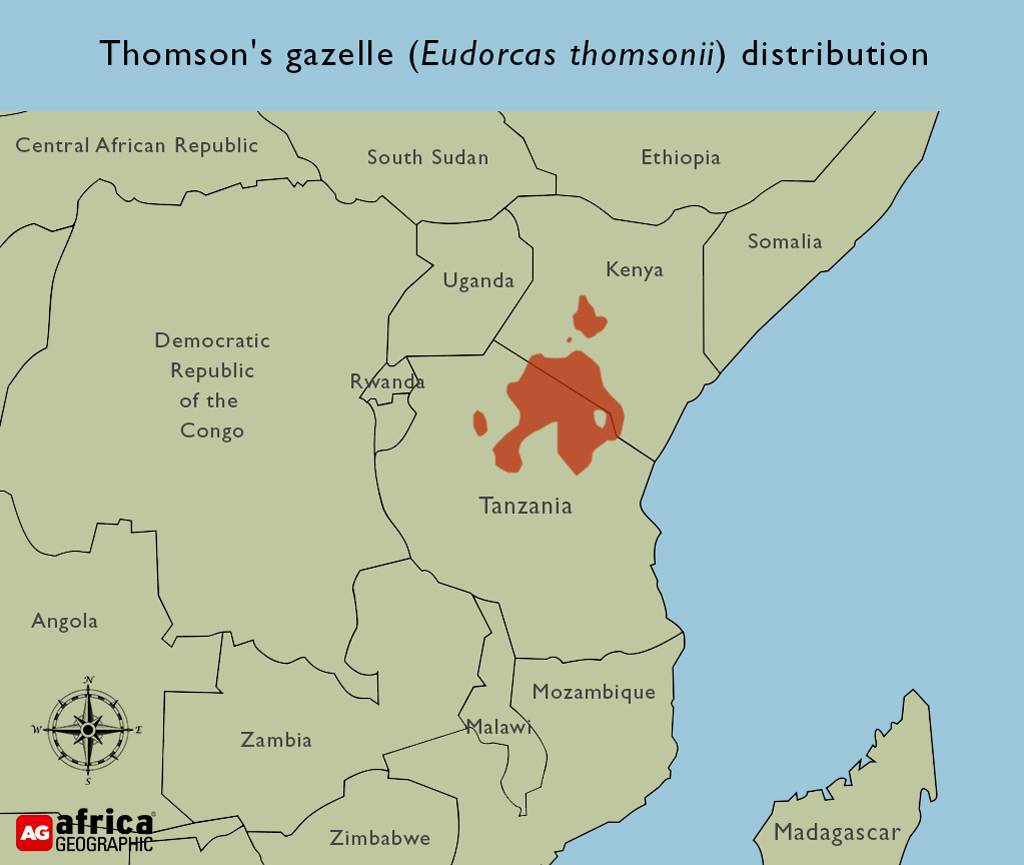 The Thomson’s gazelle (Eudorcas thomsonii) is probably the most well-known of all gazelle species and is named after Joseph Thomson, a 19th-century geologist and explorer. They are often referred to as “tommies” and are spread throughout the Serengeti-Mara ecosystem of Tanzania and Kenya.

Thomson’s gazelles are relatively small, standing under a metre at the shoulder, but they are phenomenally fast. Anecdotal evidence suggests that they may reach speeds of up to 94km/hour, though most researchers suggest a more conservative 80km/hour. Either way, they are among the fastest terrestrial land mammals. What’s more, they can sustain these speeds for much longer than most predators. Their small size confers exceptional agility, and their sharp hooves allow for sufficient traction to perform hairpin turns at top speed.

Their coats are fawn-coloured and decorated by a mixture of black and white markings on the face, flank, and tail regions. The rams and ewes have horns, but those of the females are almost ludicrous. They are spindly and short and often grow in bizarre directions or curl to grow close to the skull.

Some have theorised that the reason behind the gender horn difference is that the Thomson’s is an example of evolution in action. That is, the females are gradually losing their ability to grow horns at all. This, in turn, ties into the theories on why some female antelope grow horns while those of other species do not.

There are several explanations offered for this phenomenon. The first is a strong positive correlation between females growing horns and a preference for open habitats with minimal cover. Thus, the antelope is more conspicuous, and horns will serve the female well to defend both herself and any offspring. The same idea applies to large-bodied antelope that would struggle to hide. On the other hand, horns in a dense habitat are cumbersome and detract from the individual’s ability to hide. There is no survival advantage in expending energy to grow horns. A further explanation is that in species where the female has horns, it is harder for mature males to identify and chase young males away from the group, thus increasing the chances of survival for young males.

There is no consensus on exactly why the horns of female Thomson’s gazelles are so dramatically reduced, but it does fit neatly with the theories. Though they prefer mostly open habitats and are known to fight valiantly against predators, their main defence is speed.

Fortunately, the tiny Thomson’s gazelle fawns are not entirely reliant on their mother’s horns for survival. They are highly camouflaged and genetically programmed to remain still in the absence of their mothers. So powerful is this instinct that fawns have been observed to remain frozen even while being pawed by predators – often to the intense confusion of the attacker. It is incumbent on guides to be extremely cautious when driving off-road, particularly when birthing peaks.

The behaviour of a mother returning to feed her fawn is easily spotted. She will creep cautiously towards the hiding place and circle around it, stopping to scan for predators every few minutes. She may even pretend to feed at intervals. An astute and patient observer will be rewarded by the sight of their reunion and nursing.

If their secretive approach fails, the minute fawns are highly vulnerable and are preyed upon by everything from eagles to lions. Despite the aspersions cast about their horns, the mothers are courageously defensive and have been known to chase baboons and jackals away from their fawns successfully.

Another underappreciated fact about the Thomson’s gazelle is that it is part of the Great Migration. While the zebras and wildebeest generally take centre stage, smaller numbers of tommies also migrate, occasionally bearing the bemused expression of a small animal caught up in an irresistible tide. The journey is believed to be primarily motivated by access to water, and their migration pathway does not extend as far as that of the wildebeest or zebra. In some parts of the Serengeti, Thomson’s gazelles may form up to 90% of a cheetah’s diet. The research shows that the movements of the gazelles also affect those of the female cheetahs and non-territorial males.

Unfortunately, the nitty-gritty of unravelling which antelopes are gazelles is quite complicated. So, what is a gazelle, and why is the term not specific to any one genus or species? Let’s start with the basics: family, subfamily, tribe, and clade are all tools devised by scientists to convey the complex relationships between the various antelope genera.  With over 90 species and a great deal of convergent evolution, this is not a simple process and involves tracing lineages backwards through time towards a common ancestor. Sometimes corrections have to be made as genetic evidence contradicts morphological similarities. If the following explanation gets a bit befuddling, feel free to skip to the final two sentences of this section.

Gazelles are part of the Antelopini tribe, which also includes the bizarre-looking gerenuk and the springbok. Geneticists have only unravelled the specific phylogenetic relationships within the tribe in the last decade. A full explanation of the genetic analysis and classification is beyond the scope of this article (and the range of most peoples’ interest). However, such research has resulted in the splitting of the Gazella genus into three: the Gazella, Eudorcas (including the Thomson’s gazelle) and Nager (for example, Grant’s gazelle). To make matters more complicated, three Asian species of the Procapra genus bear the common name “gazelle” but are not true gazelles.

For the sake of simplicity: if it belongs to either the Gazella, Eudorcas or Nager genus, it is a true gazelle. If not, but it looks vaguely gazelle-shaped, it is probably closely related. For now, anyway.

Other African species of gazelle include:

The body shape and thick black flank stripe account for the fact that tommies are quite regularly mistaken for springbok (Antidorcas marsupialis) and vice versa – even though springbok are not true gazelles. The two antelope are strikingly similar at first glance in terms of both looks and behaviour but can be readily distinguished by their distributions, which do not overlap in the wild. Springbok are isolated to the more arid areas of Southern Africa, while Thomson’s gazelles prefer the short grasslands of East Africa. Springboks are taller and heavier than tommies and display a very characteristic pronking behaviour not seen in other antelope.

As we admire the flashy speed of a cheetah, it is easy to forget that the cat’s fleet-footedness is the result of a continuing evolutionary race to be the fastest and, on this racetrack, the Thomson’s gazelle is the stiffest competition.