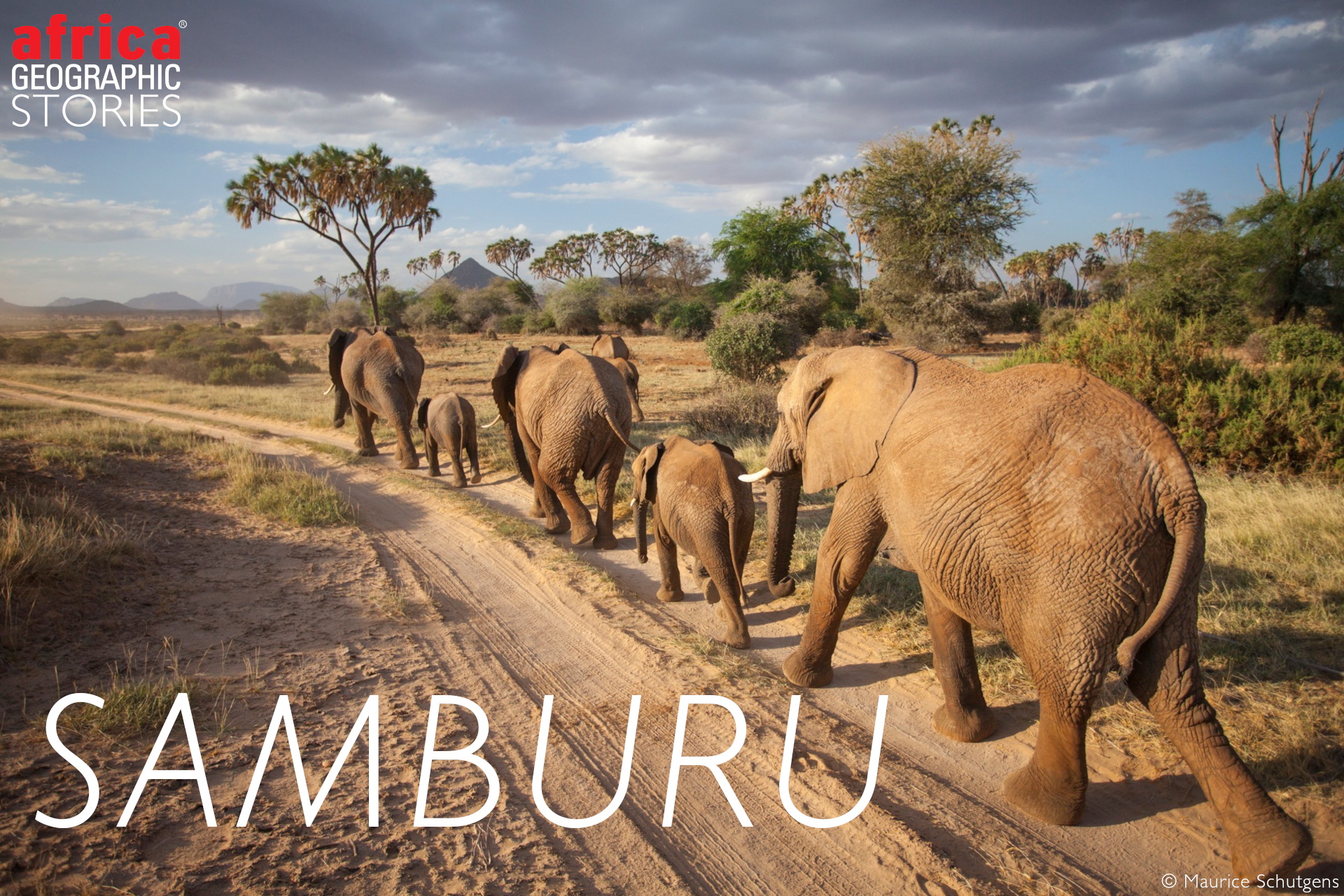 home of the Samburu special 5

This is Kenya’s Samburu County – an arid land steeped in culture and traditions, where people, livestock, and wildlife walk side by side, sharing precious resources. Like the relationship between the Samburu and elephants, a visit to the county is as much about the colourful, resilient people as the weird and wonderful wildlife and fascinating scenery.

A Samburu legend tells of a young girl leaving home for the first time with her new husband. Though her father commanded her not to look back, the girl’s heart was aching with sadness, and she turned to glance at her family manyatta (home). Angered by her defiance, the god N’gai punished her. That night she began to swell before eventually bursting out of the hut as the first elephant and running off into the night. Thus, the Samburu people say that elephants are related to them by blood. Elephants are revered, and, to this day, every time a Samburu elder encounters an elephant skull, they will place green grass and saliva on it (representing water and good growth) as a sign of respect. 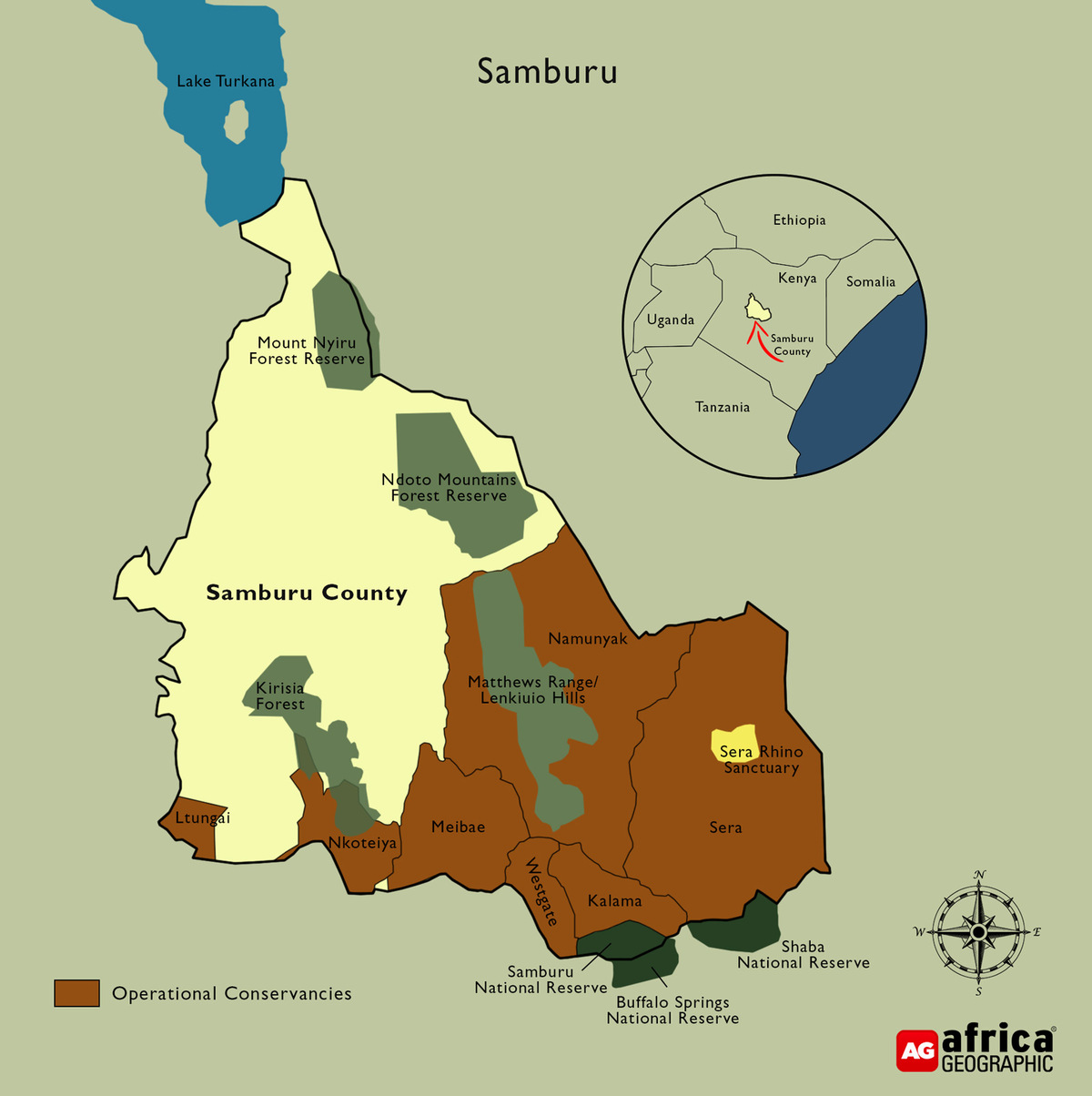 Samburu County in north-central Kenya stretches from Laikipia and Isilio counties in the south all the way to the southern shores of Lake Turkana in the north. It marks the dramatic transition from the lush savannas of south Kenya and the vast deserts that extend through the Horn of Africa. Situated at a much lower altitude than the neighbouring Laikipia Plateau, the weather is usually hot, and rainfall levels low. The resultant scenery is beautiful in a way unique to arid areas – rugged and austere, overlooked by magnificent outcrops and rolling hills.

The exception to this can be found on the banks of the Ewaso Ng’iro River, situated on Samburu’s southern boundary, and surrounded by the Samburu National Reserve. The Ewaso Ng’iro arises from the streams flowing off the slopes of Mount Kenya, fed year-round by the mountain’s glaciers. It flows all the way to Somalia and, in otherwise dry surroundings, has been key to the survival of wildlife and people. Water always equates to life, and, in Samburu, the transition to the verdant green oasis is startling. Even during the driest times of the year, when the river slows to just a trickle or dries out completely, the underground water sustains the groves of doum palms and dense riverine forests along its banks, attracting a plethora of wildlife.

The entire Samburu National Reserve is surrounded by a mosaic of operational conservancies that expand the habitat available to wildlife (and the experiences available to tourists). These conservancies are not exclusionary wilderness areas – the local communities reside here and raise their livestock alongside the wildlife while simultaneously offering tourism pursuits. This model has been vital to the conservation of vast swathes of land. Given that 65% of Kenya’s wildlife is found outside formal national parks and reserves, conservancies are vital to the conservation of the country’s wildlife.

The major protected areas within Samburu County are:

Under the direction of the Northern Rangelands Trust, many of the above conservancies offer their own intimate safari experiences and, where contiguous, are managed as one ecological entity. The conservancies have faced tremendous challenges, and the majority are shining examples of how community involvement can change the face of conservation through inclusivity and tourism.

Catchy phrases like “the Big 5”, “the Secret 7”, and “the Ugly 5” in reference to certain wildlife species are tremendously effective marketing tools that sell everything from t-shirts and curios to safaris. In the case of Samburu, the “Samburu Special 5” is a fitting moniker for a more exclusive wildlife checklist in this arid section of Africa. Included in the Special 5 are the gerenuk, the reticulated giraffe, the Grevy’s zebra, the Somali ostrich and the common beisa oryx.

Nothing can really prepare a person for their first sight of a gerenuk in the wild. Looking for all the world like a stretched-out impala, these peculiar antelope are one of Africa’s genuine oddities – designed to stand on their hindlimbs and use bizarrely elongated necks to nibble on hard-to-reach leaves. They are in equal parts graceful and hilarious.

The endangered Grevy’s zebra is the largest of the three zebra species and quite possibly the most attractive. They can be easily distinguished from their plains zebra cousins by their large round ears, neat and close-set stripes, white bellies, and fawn-coloured muzzles. The majority of the remaining wild Grevy’s zebras are found in northern Kenya, with some small and isolated populations in Ethiopia. Equally geometrically easy on the eye are the reticulated giraffe, the rarest of the giraffe species after the Northern giraffe.

The Somali ostrich was only recently identified as a separate species, rather than a subspecies of the common ostrich found throughout most of Africa. They are native to the Horn of Africa and are also sometimes referred to as the blue-necked ostrich – during courtship the necks and legs of the males turn blue instead of flushing pink! And finally, the common beisa oryx is one of two subspecies of the East African oryx found in Kenya.

…and their equally special compatriots

While Samburu is not necessarily at the top of the list for many first-time safari-goers, it offers an astonishing abundance of wildlife, including the more iconic creatures. Thanks to concerted conservation efforts, elephants abound, and the population increases significantly during the two rainy seasons when they migrate north from Laikipia. Samburu is home to the headquarters of Save the Elephants, established by Iain Douglas-Hamilton, meaning that the elephants here are some of the most extensively studied in the world. Buffalo are common in the wetter areas and riverbanks. Apart from the aforementioned gerenuk and oryx, other dry-country antelope include the lesser kudu and the adorable (and ubiquitous) Kirk’s and Günther’s dik-diks.

Samburu is also a predator haven for the three big cats, African painted wolves and even the rare and elusive striped hyena. There is always a constant element of surprise to wildlife viewing in Samburu, with the added advantage that it is far less crowded than the more popular southern Kenyan safari areas.

Though rhinos are almost entirely extinct in Samburu, visitors to the Sera Community Conservancy can spend time tracking newly introduced black rhinos on foot in a massive 540 km2 (54,000 hectares) sanctuary. Given the notoriously cheeky nature of these remarkable animals, this is guaranteed to be a thrilling experience within the safe parameters laid out by expert Samburu guides.

As it occupies such a unique position between desert and savanna, it is only to be expected that the birding on offer in Samburu would be sublime. There are several coveted endemic and arid specialists to be found across its heterogeneous landscapes. Some bird species to watch for include the charismatic vulturine guineafowl, Somali bee-eater, golden pipit, white-headed mousebird, D’Arnaud’s barbet, and rosy-patched bush-shrike. Have a look at AG director Christian Boix’s Samburu National Park’s top 10 birds list, as well as our CEO Simon Espley’s account of his birding adventures in Samburu.

From the reserves to conservancies and from budget accommodation to the ultra-luxurious lodges of Samburu, everything is almost exclusively operated, managed and staffed by local Samburu people. The Samburu people refer to themselves as the Lokop/Loikop people and were traditionally semi-nomadic pastoralists, following the rain to provide food for their livestock. Their nomadic lifestyle has been largely phased out, but cows, sheep, goats, donkeys, and camels (a more recent addition) are of tremendous cultural importance. The Samburu language is a dialect of Maa, the language of the Maasai people, with whom the Samburu share many lifestyle similarities.

The Samburu people are known in particular for their beautiful and intricate beadwork (which is always on sale for entranced tourists) and vivid traditional outfits. However, their wisdom and deep connection to their homeland add to the depth and wonder of the Samburu experience. Expert Samburu guides will freely share their knowledge and traditions with fascinated tourists, and visitors to the Namunyak Conservancy can visit the local “Singing Wells”. Here the warriors gather in the dry riverbeds to dig wells to satiate their livestock, singing haunting traditional melodies as they work.

Wild and remote, Samburu is the perfect combination of stark, untamed wilderness and luxury safari destination. Here visitors can choose to view the wildlife on a guided walk, horseback or even on the back of a camel. There are several public campsites within Samburu National Reserve, as well as budget chalets and fixed tent accommodation, mostly situated near the Ewaso Ng’iro River. Like the Laikipia approach, the surrounding conservancies offer a high-quality, low-density approach to tourism. Many are home to extremely luxurious lodges and greater freedom for novel experiences.

There are two rainy seasons – one between April and May and the second between October and November. However, due to its relatively low rainfall averages, Samburu is largely accessible throughout the year unless unexpected floods occur. Wildlife viewing is at its best during the dry seasons, but it tends to get quite dusty and hazy, which can obscure the spectacular scenery somewhat.

For a spectacular look at Samburu see Samburu Sensations

Samburu is spectacular for birding

Learn about the language of the Samburu people

For a look at the colourful Samburu people see here