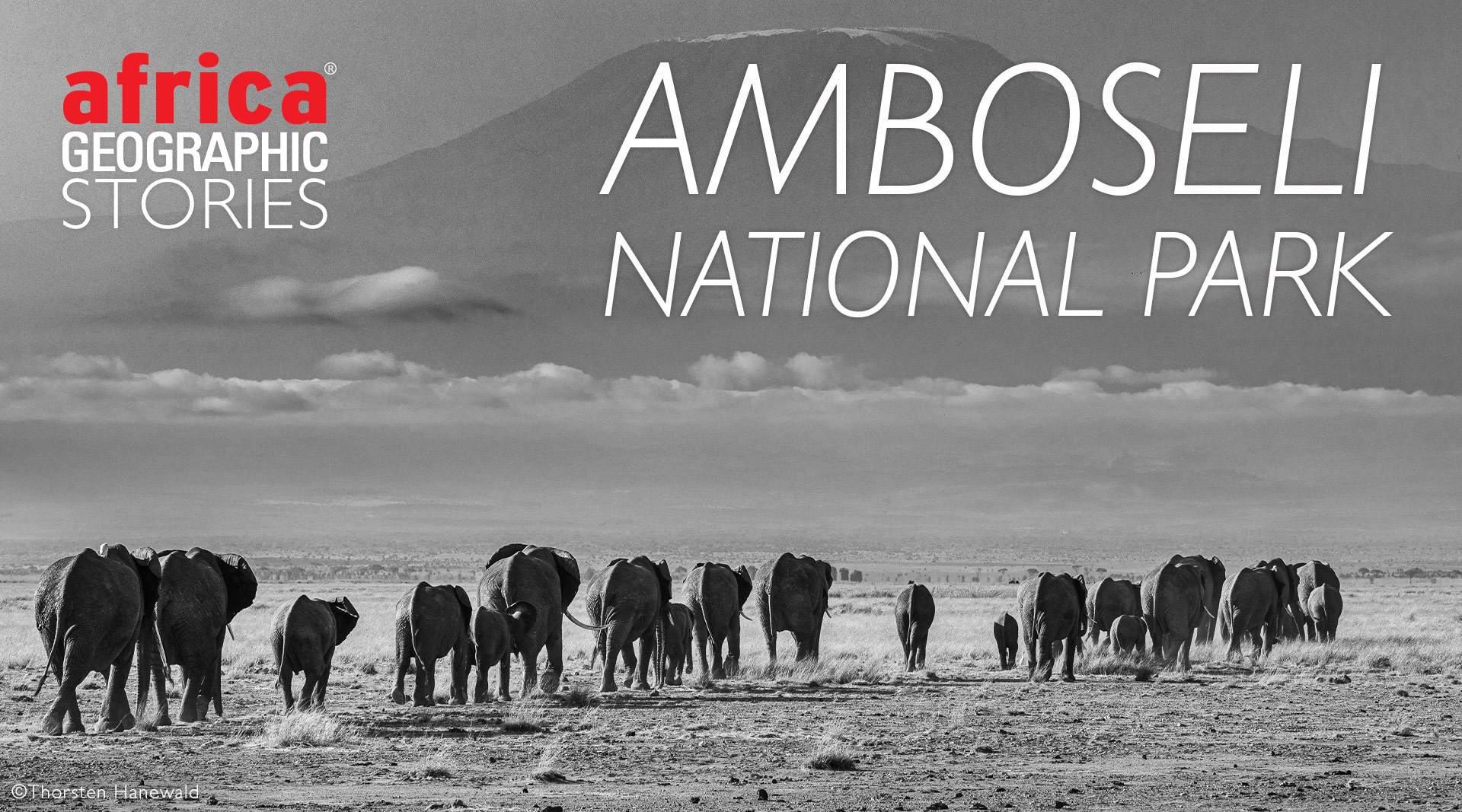 In the shadow of Mount Kilimanjaro

There is ineffable magic about spending time in the company of elephants. Nothing else in the world compares to the ethereal emotions felt in their presence – a complex awareness of ancient wisdom and profound intelligence. Of all creatures, elephants perhaps best epitomise a wild sense of the divine. Nevermore is this the case than in Amboseli National Park, where these imposing animals stand against the backdrop of ice-capped Mount Kilimanjaro – one of the most iconic images of Africa.

The Park and the broader ecosystem

Apart from its contribution to the scenery, Mount Kilimanjaro has shaped Amboseli’s habitat and wildlife in more fundamental ways.  The constant supply of melting water from the mountain’s glaciers flows off the slopes and sinks below ground before rising through the porous soils in Amboseli to create freshwater springs. The result is that while Amboseli itself is relatively arid with low rainfall averages, some of the park is dominated by species-rich marshes, with Enkongo Narok, Ol Tukai, and Olokeya the three largest. 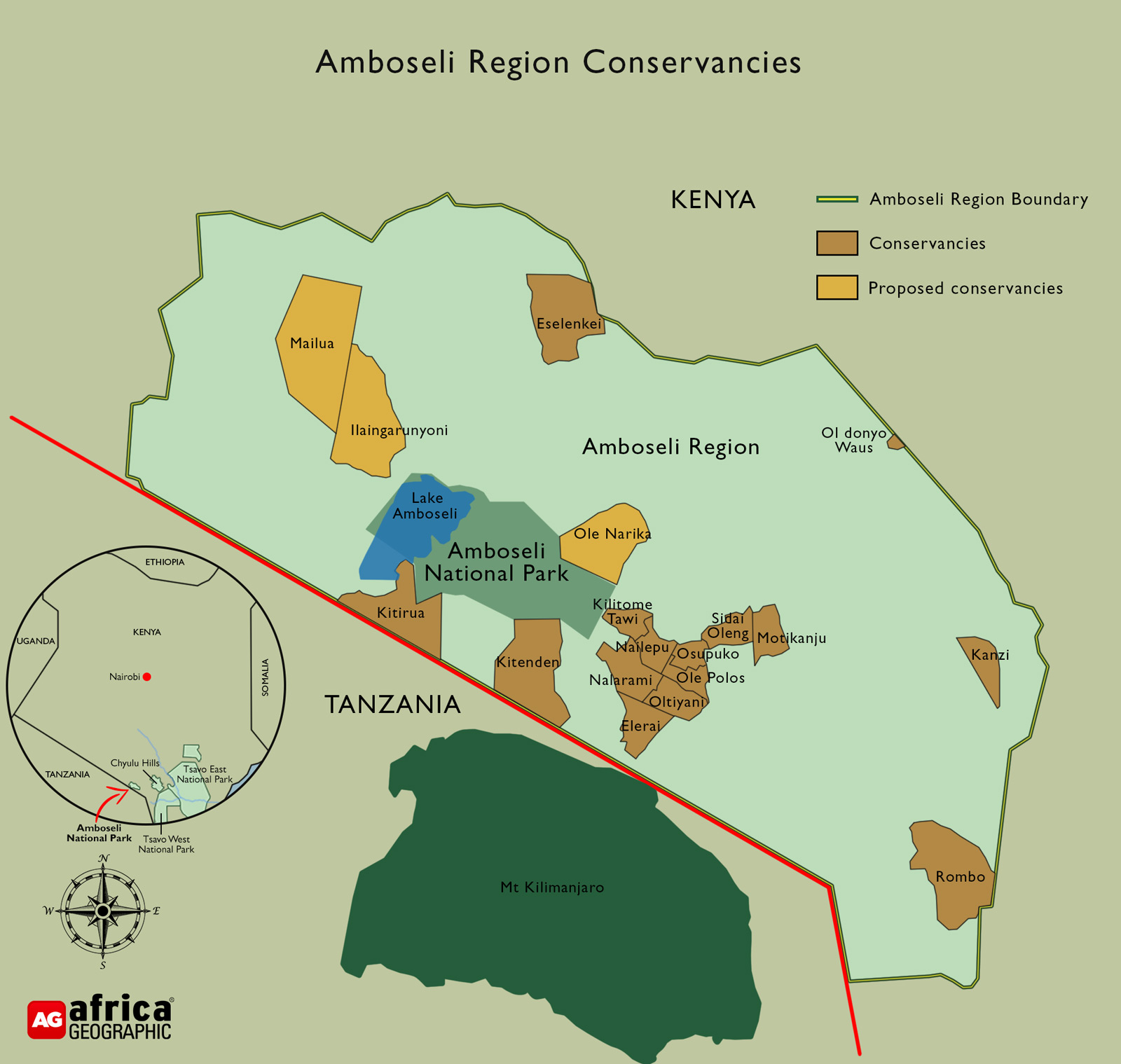 The western section of the park also encompasses part of a dry, Pleistocene lake basin. Within this basin, Lake Amboseli is typically dry except during heavy rainy seasons, when it fills with shallow, alkaline water accompanied by a pink flush of opportunistic flamingos. Away from the lakes and marshes, the park is characterised by sparse vegetation and dusty volcanic soils. The name Amboseli is a corruption of the Maa word ‘Empusel’, which translates roughly as “salty, dusty place”.

On the outskirts of Amboseli, there are several conservancies dedicated to conservation and tourism. These increase the available protected land considerably while offering the discerning traveller a more exclusive experience. The conservancies are supported by the Amboseli Ecosystem Trust, which was established to maintain the larger ecosystem and reduce human-wildlife conflict as wild animals move along ancient migratory paths between the various formally protected parks.

Thanks to the combination of sparse, arid vegetation and the readily available water in the swamps, Amboseli offers spectacular wildlife viewing despite its relatively small size. However, the park’s most celebrated residents are the elephants, present in high densities and sporting some of the largest body and tusk sizes in Africa. Elephants are everywhere in Amboseli, revelling in the waters of the marshes, treading dusty pathways led by a trusted matriarch or, occasionally, posing against the backdrop of Kilimanjaro for awe-struck, camera-wielding tourists.

This alone is sufficient to send visitors home elated, having garnered a new appreciation for Africa’s largest land animal, but the elephants of Amboseli have a further claim to fame. Many of these herds and bulls have been the subjects of the longest-running study of elephant behaviour in the wild. The Amboseli Elephant Research Project, initiated by Cynthia Moss and Harvey Croze and operated by the Amboseli Trust for Elephants, has centred around researching and monitoring the elephants of Amboseli for five decades. The life histories of individual herds have been painstakingly documented across generations, contributing immeasurably to our understanding of elephant behaviour and the bonds within and between herds.

The story of Echo, the matriarch who led her family for over forty years before her death in 2008, captivated people worldwide and changed perceptions around elephants’ complex emotional lives. Her family are still the subjects of ongoing research and remain permanent fixtures around the park’s centre. Tim, a bull elephant who died last year of natural causes, had a penchant for trouble. He also gained considerable fame as a ‘super tusker’ – as has Craig, another gentle giant.  Amboseli and Tsavo’s elephant populations are some of the last genetic repositories of Africa’s great tuskers.

While elephants may well be the main event, the park’s other creatures never fail to provide a stirring, supporting performance. Lumbering hippos wallow in the shallows of the marshes and lakes during the day, emerging to mow their way through the park as the heat dissipates. Herds of zebras and wildebeest dominate the plains, while shy gerenuks nibble their way around the legs of towering giraffes.

In the past, Amboseli’s predator populations, particularly lions, have born the brunt of human-wildlife conflict and resentment born of the park’s complex history. Fortunately, comprehensive conservation programmes and work with local communities are showing results. While throughout Africa, lion populations have plummeted, the lion numbers in Amboseli have grown consistently over the past decade. Visitors are now regularly treated to sightings of Africa’s largest cat.

Amboseli’s unique blend of semi-arid savanna and marshlands attracts various birds, and over 420 different species (including, miraculously, once, a shoebill) have been recorded in the region. Time spent around the marshes could well reward a keen-eyed birder with the pale flash of the endangered Malagasy pond heron in between the leggy egrets, herons, and grey-crowned cranes.  Away from the water, the grasslands obscure the vocal Pangani longclaws, and the vachellia woodlands hide dry country species like the steel-blue whydahs and Von der Decken’s hornbills.

Given the extraordinary wildlife sightings on offer and the best views of Kilimanjaro in Kenya, it is unsurprising that Amboseli is Kenya’s most popular safari destination after the Maasai Mara. The high tourist time coincides with the dry season and arguably the best wildlife viewing as the animals congregate around available water. However, this does mean contending with higher costs and visitor densities. The two rainy seasons – the short rains from November to December and the long rains from March to May – can make traversing the park and spotting wildlife tricky. That said, the scenery is arguably at its most spectacular with the dampening of the dust.

Weather-wise, Amboseli is typically hot and dry, and the park’s proximity to the Equator ensures relatively consistent temperatures. Naturally, sun protection is a must, as are malaria preventative measures.

As a national park, Amboseli is subject to certain restrictions necessary to safeguard its ecological integrity. Normatior (also known as Observation Hill) is one of the few places where tourists can exit their vehicles and soak in the park’s atmosphere. Rough-hewn stairs lead to the top of Amboseli’s highest point, which offers astonishing views of the surrounding marshes and lakes, and, on clear days, Kilimanjaro. However, for more intrepid travellers, neighbouring conservancies are not subject to the same constraints (due largely to their more exclusive nature). Here visitors can explore through guided night drives, on foot or even on horseback. Naturally, this comes at a cost. A stay in one of the private conservancies is typically more expensive (and luxurious) than the national park’s more budget options.

For Amboseli accommodation options at the best prices visit our collection of camps and lodges: private travel & conservation club. If you are not yet a member, see how to JOIN below this story.