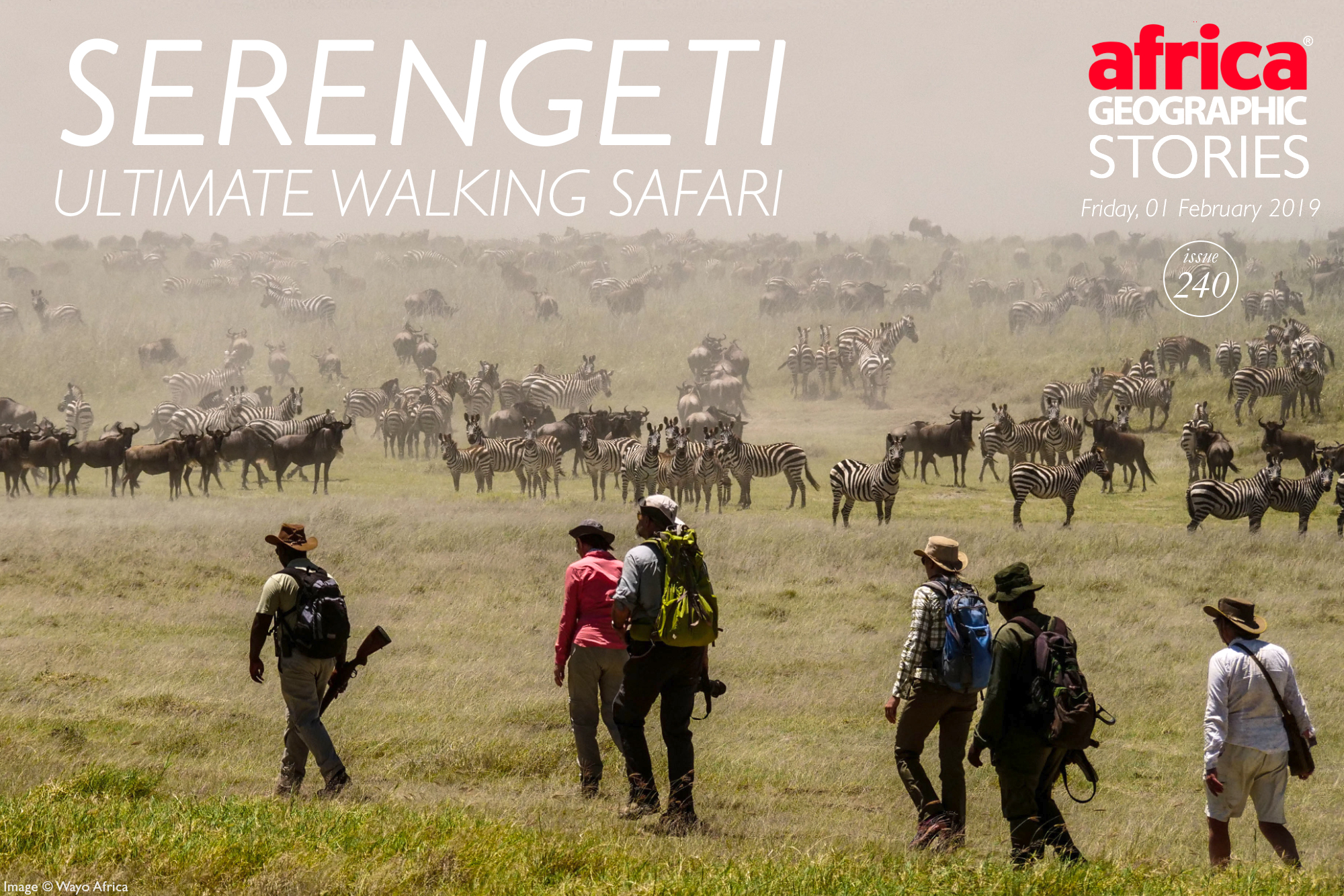 Walking through a wild paradise 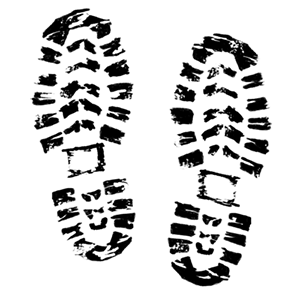 “Listen”, says Jean, cupping his ears and staring at the distant horizon. I listened. Nothing, except for that constant muuuuuh muuuuh? muuuuh coming from the wildebeest herds dotted around us, and the constant buzz of birds and insects. Still I listened. Nothing. I looked at him and raised a quizzical eyebrow.

You see, the Serengeti can be pretty busy during the Great Wildebeest Migration season, and yet we had been on safari for days without hearing a vehicle, or seeing another soul. This was no private concession; we were in Serengeti National Park. On one occasion, we had watched a pride of lions hunting a herd of cranky old male buffaloes (more about this later) – no other tourists present, despite this being prime tourism season. Huh?

It turns out that the Serengeti is VAST, and there are massive swathes of wilderness that are far away from the roads, and therefore see no tourism traffic. I have seen this during several flights over the Serengeti over the years – miles and miles of open savannah dotted with rocky kopjes and woodland, and rivers snaking through – but no roads or tourists in sight.

I was on a walking and fly-camping safari in these Serengeti wilderness areas. Heaven on Earth.
When I say ‘fly-camping’, I don’t mean dig your own pit latrine, divine water and find food. I mean comfortable, rustic tented camps that are either seasonal (timed according to the migration movements) or they are set up specifically for your walking safari. And there is a team behind the scenes to cater to your needs while you make the most of being in paradise.

One late morning, after walking since sunrise, the rising heat and aching feet drove us to a huge fig tree clawing out a living on a rocky kopje with views across the simmering savannah. We clambered up the rocks, to find chicken wraps, chocolate brownies, cool drinks and mattresses set out in the cool shade. Say no more.

Four hours of feasting and snoozing later, we walked the last hour to our camp for the night. It was just us on that rock, with regular visits from white-headed barbets and Fischer’s lovebirds as they plundered the ripe figs overhead. Some in our party spent that time reading books or Kindles, some chatted quietly, and others like me simply hit the snooze button. Could life be better?

About those lions. So, we were walking across a slope overlooking a riverine drainage line below us, when we first heard their faint grunted contact calls. Then we saw a few svelte lionesses slinking through the dense riverine shrubs, totally focused on the hunt. We sat in the shade of a small tree a few hundred metres away and waited for the drama to unfold. The lionesses ignored us like we were wallpaper, though they did glance at us now and then, possibly to make sure we would not spoil the hunt. Sharp eyes amongst us picked up the dark shapes of several huge male buffaloes lurking amongst the shrubs, seemingly oblivious to the advancing threat. We held our collective breaths.

Suddenly the silence was broken as the buff boys picked up the scent of the lions and got the hell out of there, joined by several others that we had not realised were mud-wallowing a short distance away. The cantankerous buggers made their indignant departure (happily in the opposite direction to us) amidst snorts, farts and bellows. And the lions simply vanished. Gone.

An hour later, while walking up a small valley that would crest with a view over our next camp, we gaped in wonderment at the sheer number of animals just across the valley, a few hundred metres away – good numbers of elephant, giraffe, zebra, wildebeest, topi, hartebeest and warthog. In fact, I cannot remember one time during the 5-day walking safari that we could not see or hear large numbers of animals all around us. At times when walking across the flat grassy savanna, the herds of wildebeest and zebras seemed to part ahead of us and reform behind us, like a magnetic force field.

One morning I was enjoying a quiet moment alone on the fringes of the camp, mug of coffee in hand and watching a stunning red-cheeked cordon-bleu waxbill scratch around for grass seeds when a daring side-striped jackal appeared out of nowhere and dived into the grass 10 metres from me. He emerged with a tiny Thomson’s gazelle fawn in his mouth, and headed off, dragging the screaming young thing with him. In a flash, the fawn’s mom appeared and attacked the jackal with diminutive determination. After a few head-butts in the rear-end (those sharp little horns must have hurt), the jackal dropped his intended breakfast and ran for the hills. Mom quickly escorted her kid away, shaken but not stirred.

Life on a walking safari is made of these moments of magic, these packets of exhilaration and solitude. This is the “slow safari”, the true essence of journeying.

Who should do a Serengeti walking safari

These walking safaris are not the brief mid-morning stroll after your game drive, offered by many traditional safari lodges. Instead, the goal is to cover a good amount of ground and to explore the vastness beyond the usual tourist haunts. And so, you should be prepared to spend most of each morning walking, and possibly part of each afternoon. The pace is slow, and the terrain easy, but you should be walking fit.

This is not a route march, so every excuse to stop is taken – from bird-watching to wondering at a spider packing up her dew-drenched web after a night of hunting. And watching lions hunt buffaloes.

You will carry your water and personal items for that walk, but of course, your kit bag and heavier items are left in camp, to be transported to the next camp location. Blisters are the norm, and you will get hot and uncomfortable at times. And did I mention the tsetse flies?

There is a game-drive vehicle-based at camp, and so game drives are possible during walking safaris – but the true essence of walking safaris is to, well, walk.
Indeed, Serengeti walking safaris are for those who want more than the traditional lodge and game drive arrangement. That said, a combo of the two is just perfect. After this fantastic soul-food walking safari, I headed off to enjoy a more traditional lodge-based safari, also in the Serengeti. Which did I prefer?  That is like asking whether you prefer the main course or dessert. The question is what you want, versus what you need. The answer lies within you…

Serengeti National Park, in northern Tanzania, comprises of almost 15,000 km² of predominantly rolling grasslands, savannah, riverine forest and woodlands.
This vast landscape forms part of the unfenced Mara-Serengeti ecosystem that spans Kenya and Tanzania and plays host to the Great Wildebeest Migration and offers regular sightings of the Big Five (lion, leopard, elephant, buffalo and rhino) as well as zebras, crocodiles, hippos, giraffes, various antelope species and good populations of cheetahs and hyenas, as well as smaller species such as serval and bat-eared fox.

The name Serengeti is derived from the Maa word siringet, which refers to a “place where the land runs forever.”

Simon was a guest of Wayo Africa, who offer several activities across northern Tanzania, from canoeing to biking and walking. Using expert guides and unique access, they focus on remote areas within the iconic Serengeti, Ngorongoro, Lake Manyara and Arusha regions. With only 30% of the Serengeti currently accessed by tourists, they prefer to operate in the unexplored regions of the park, from their various permanent and mobile camps that are located seasonally to either follow the Great Wildebeest Migration or to cater to specific client requests. The camps are simple and very comfortable, evoking a feeling of adventure – from a bygone safari era. They are termed “green camps” because every effort is made to tread lightly – making use of solar power, gathered rainwater and compostable toilets.

Naabi Green Camp is located under a stand of large Acacia tortilis trees in a beautiful quiet area at the foot of the giant Nabi rocky kopje in the southern Serengeti short grass plains, south of the prime Seronera area and close to the Ngorongoro Conservation Area. The camp is open from December to March each year, to catch the Great Wildebeest Migration as it moves through this area, but also well-placed to be able to head further south, west or north to wherever the migration is moving.