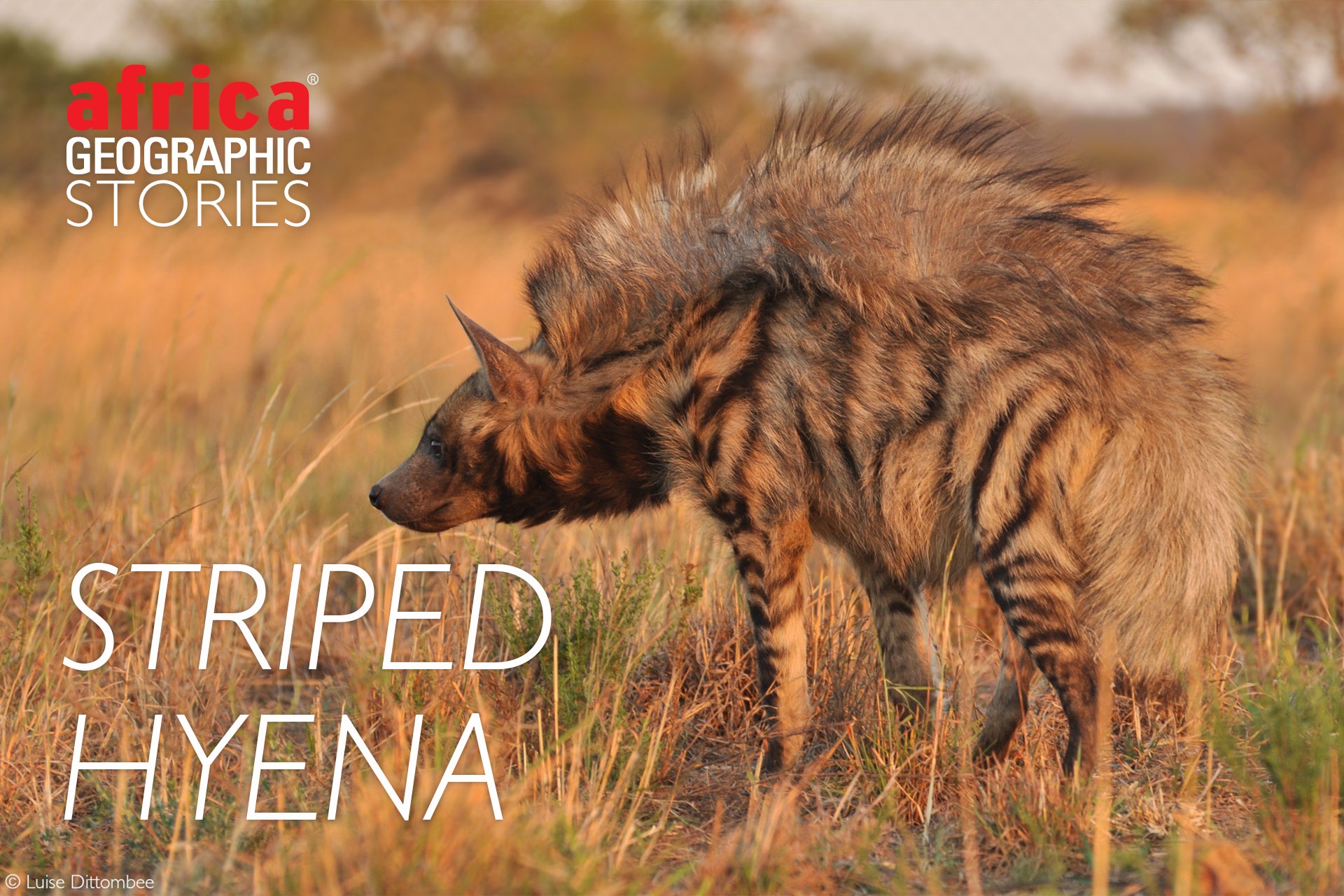 As the sun dips to the horizon, burnishing the plains of East Africa in shades of gold and orange, spotted hyena whoops and cackles fill the air. Burning with fierce intelligence, they band together in groups to hunt and patrol territories or set out on solitary foraging missions. As darkness descends over the rocky outcrops bordering the plains, another hyena watches – a silent and mysterious cousin. Seldom seen and poorly understood, the striped hyena lurks in the shadows, shy and elusive. 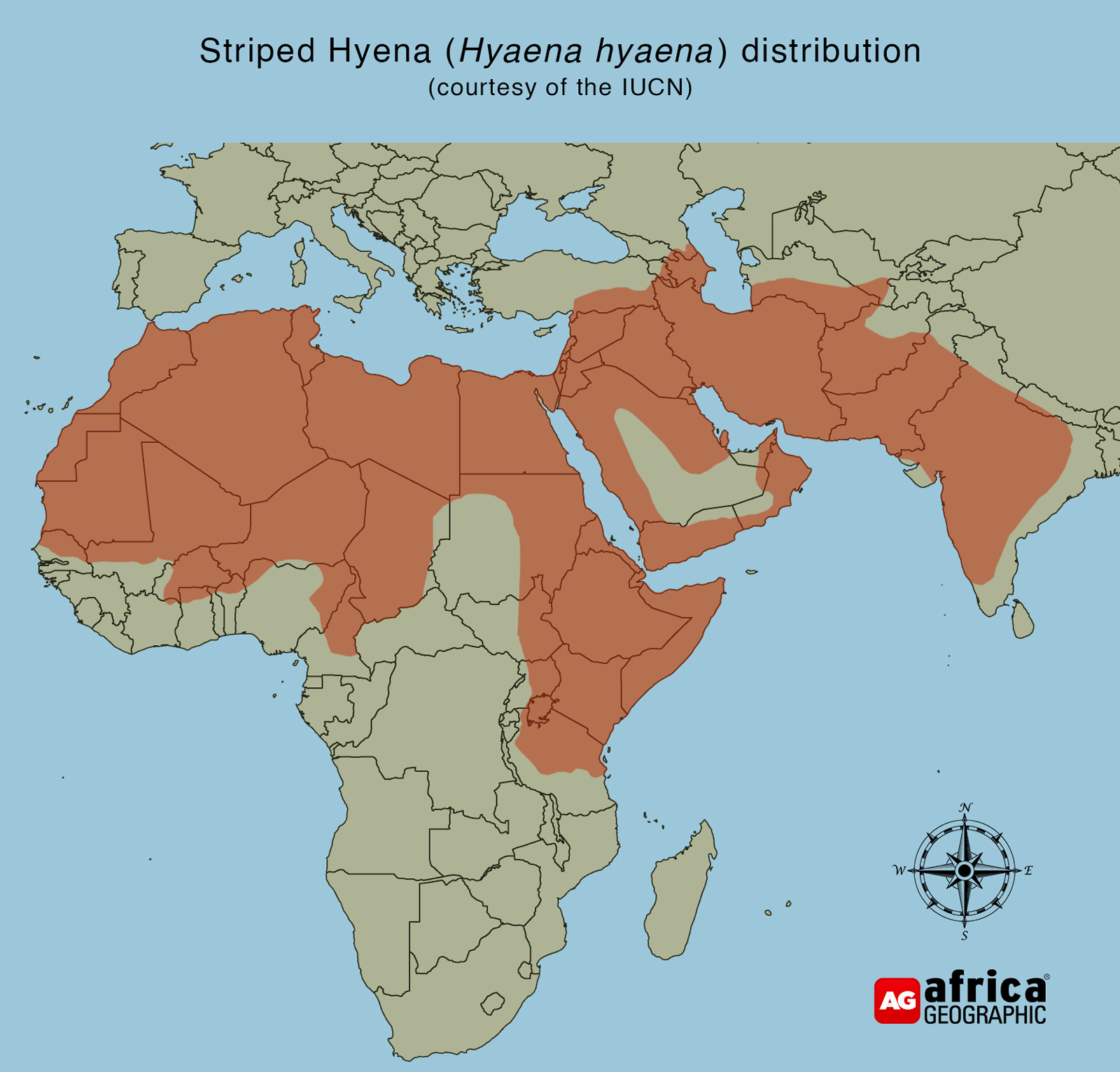 In Africa, the timid and retiring striped hyena is eclipsed almost entirely by its bolder and more conspicuous spotted and brown cousins. So much so that few people even realise that this hyena species occurs on the African continent . Even the aardwolf is more readily recognised. Unusual for a large carnivore, the exceptionally secretive habits of striped hyenas have resulted in piecemeal research, particularly in Africa. However, this air of mystery makes them decidedly intriguing, simply because we know so little about a species in one of the major carnivore families.

The little we know about striped hyena ethology stems largely from the populations found throughout Asia (the striped hyena is the only hyena species found outside of Africa). There are only a handful of published papers on the behavioural ecology of striped hyenas in Africa. Much of what is inferred comes from a handful of observations or second-hand anecdotal evidence.

Despite this dearth of information, the striped hyena is widely (but patchily) distributed across most of North and East Africa, the Horn of Africa, and sections of West Africa, albeit at low densities. They have a preference for semi-arid regions and avoid deserts or thick forests. In places where striped hyenas overlap with spotted hyenas, they are outnumbered and largely outcompeted. Unlike their spotted counterparts, striped hyenas are almost exclusively scavengers, though they occasionally hunt small and manageable prey.

There are four extant species of hyena: the spotted hyena (Crocuta crocuta), the brown hyena (Parahyaena brunnea), the striped hyena (Hyaena hyaena) and the aardwolf (Proteles cristatus). Despite their dog-like appearance, all members of the hyena family (Hyaenidae) are more closely related to the genet (Viverridae) and mongoose (Herpestidae) families, as part of the Feliformia (cat-like) sub-order of Carnivora.

Though the striped fur and thick mane of the striped hyena most closely resemble the aardwolf, careful observation reveals a closer similarity with the brown hyena. Indeed, take away the fur, and one can see that the two share an almost identical body shape, though the brown’s skull is more robust. Unlike the rounded ears of the spotted, both the brown and striped sport more dog-like and expressive ears. Both are mainly scavengers with bone-crushing jaw strength and massive carnassial molars but lack the spotted’s head and neck power. Their short torsos and reduced hindlimbs emphasise the sloping posture so characteristic of the hyena family.

The physical similarities are reflected in the phylogenetic relationships within the Hyaenidae. The aardwolf (a specialised termite-eater) is only distantly related to the other three species; the spotted diverged over 10 million years ago, and the brown and striped evolved from a common Hyena ancestor. Like spotted hyenas, striped likely evolved in Africa before spreading north and east into Europe and Asia. However, unlike the spotted, which disappeared from these regions due to reduced habitat and competition with wolves and humans, the smaller striped hyena survived. The answer to why and how goes to the heart of survival strategies and, most likely, differences in social structure.

The evolution of social versus solitary approaches to survival is just as important as the anatomical features of a successful species. Though many factors determine the development of sociality, it is influenced by resource and spatial use, and competition with other predators. One of the aspects of the Hyaenidae that is a source of endless fascination for researchers is the diversity of social structures within the relatively small family.  As a highly social apex predator, the spotted hyena is well known for its complex hierarchies and cooperative hunting. The (mostly) monogamous aardwolf lives in pairs but forages alone, while the brown hyena lives in small groups but usually hunts/forages alone (behaviourally solitary).

The striped hyena was long believed to be entirely solitary, apart from mothers and young offspring. However, in the last two decades, detailed fieldwork and camera traps have revealed that striped hyenas are somewhat more complicated than initially thought and probably have a social structure not dissimilar to that of brown hyenas. We know that groups of up to seven individuals have been observed resting, feeding, and travelling together. Individual reports exist of sub-adult youngsters helping their mothers raise the next litter of cubs, and males (on occasion, more than one) have been observed attending cubs in rocky cave dens. One striped hyena in Israel even appeared to join a wolf pack, indicating the possibility of a strong social drive.

The study of the behavioural habits of any animal is a never-ending process, and we are still very much in the early stages of understanding the nuances of the striped hyena. This is not just an academic process – it has a considerable impact on their conservation because the more social an animal, the higher we should expect their densities to be. This, in turn, means viewing population assessments through a different lens.

Female spotted hyenas have gained considerable notoriety for their unique genitals. They are equipped with an extended clitoris that functions as a pseudo-penis with a fused vaginal and urethral opening. This design comes at a considerable cost: the death rate for whelping females is exceptionally high, and first-time mothers regularly lose their first litters during birth. A universally accepted theory behind why this is the case has continued to elude researchers.

Striped hyenas add to the mysteries of hyena sex in a slightly different way. In young striped hyenas between one and 18 months of age, the genitalia of both sexes converge in appearance. In other words, they display traits that mimic the characteristics of the opposite sex. The females develop swellings resembling a scrotum (the only other example of transient masculinisation in mammals is the fossa). In contrast, young males develop swellings similar to labial folds. This is temporary, and adults develop typical mammalian genitalia upon reaching sexual maturity.

What this tells us about the evolution of the Hyaenidae is open to interpretation, but indicates that theories surrounding the functions of genital anomalies have to be broadened beyond Crocuta to include the Hyena genus. Anatomical evolution can only be understood in combination with an intimate understanding of the social structure and selection pressures of every species in the family – including the striped hyenas.

Throughout history and across cultures, human beings have assigned an astonishing variety of superstitions and beliefs to animal parts in the hope that they will increase reproductive prowess. In today’s troubled times, rhino horns (and tiger bones and pangolin scales and so on) have fabricated powers. In Ancient Greek and Rome, the unfortunate striped hyena attracted this attention. It became a symbol of fertility, with any number of uses for striped hyena parts, including an amulet that would make a man irresistible to the person of his dreams.

Either way, it would not make much of a difference to the striped hyena, but this positive association with hyenas was a rarity. Most cultures across Africa and Asia assign negative mythology to the hyena. They represent everything from evil spirits to witches’ mounts. The striped hyena has found itself persecuted at every turn – a problem compounded by their tendency towards grave robbing.

Nowadays, the striped hyena is classified as “Near Threatened” on the IUCN Red List, and their numbers (known to be decreasing) are estimated at less than 10,000 mature individuals. The truth remains that this estimate is openly based on scientific guesswork drawn from outdated assessments. The striped hyena, with its preference for rugged habitats and secrecy, is exceedingly challenging to count. The task of blindly conserving them is even more difficult because they are not yet divided into recognised subspecies – despite the significant size differences between Asian and African specimens. Striped hyenas occurring in the Middle East, Asia Minor, Central Asia and the Indian subcontinent are larger than those found in East Africa and the Arabian peninsula.

Few people ever have the chance to glimpse the elusive, forgotten, fourth hyena of Africa. The striped hyena remains shrouded in secrecy yet could quite possibly hold the key to unanswered questions on hyena evolution that have vexed experts for decades.

For those intent on seeing an African striped hyena in the wild, the best place to start is one of the private concessions in Kenya or northern Tanzania that offers night drives. For accommodation options at the best prices visit our collection of camps and lodges: private travel & conservation club. If you are not yet a member, see how to JOIN below this story.