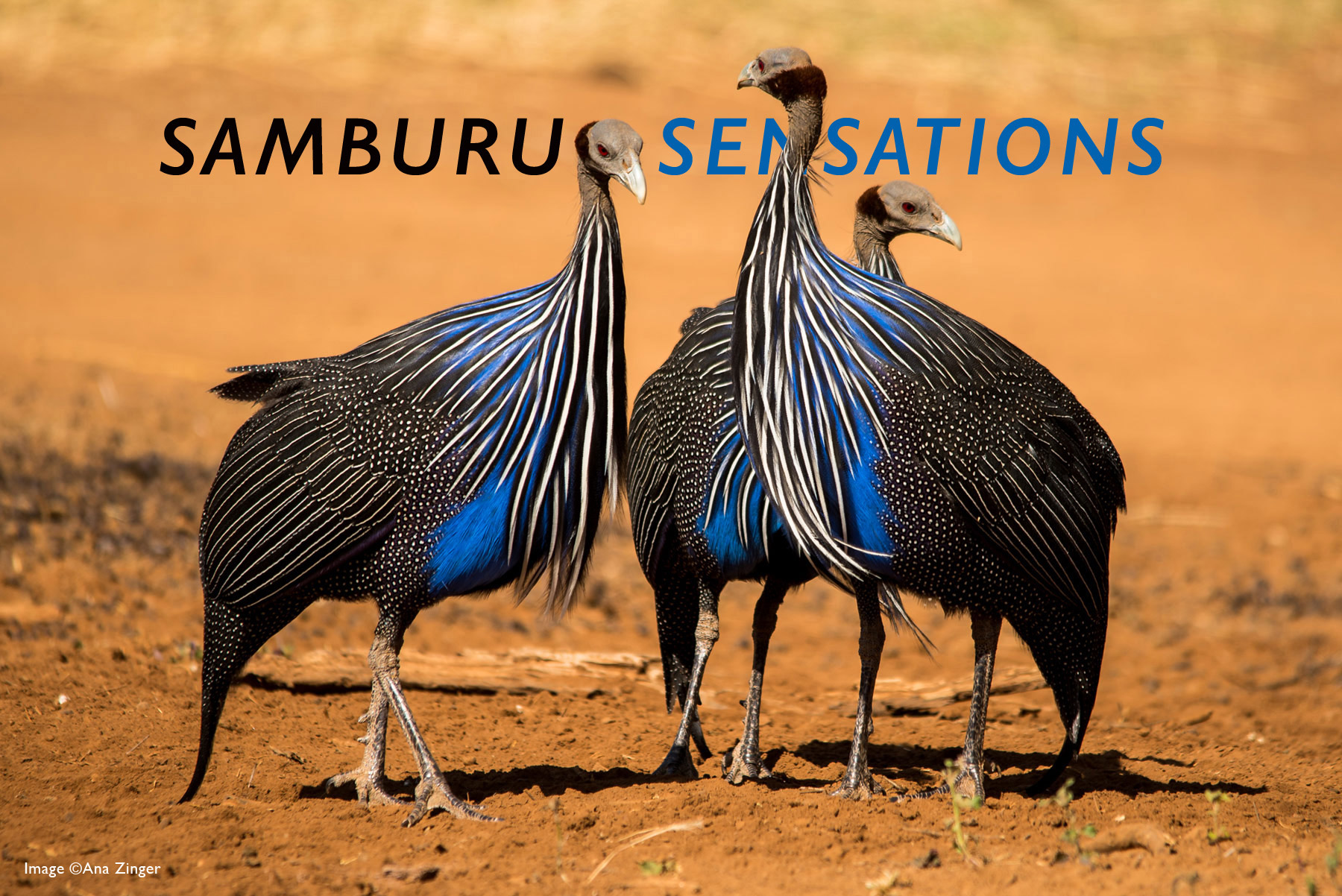 The problem with looking for our little feathered friends in Kenya’s Samburu National Reserve is that the big stuff gets in the way. This arid thorn tree region hosts such abundant wildlife that focussing purely on birding is impossible. For his first visit to the region, we challenged Africa Geographic director, Simon Espley, to tick off a carefully compiled list of avian eye candy: 15 species in 3 days. It proved tricky, but he’s not such a twitcher that he ignored the other wonders of this incredible region.

I was enthusiastic about my team’s bid to get me twitching in Samburu National Reserve because they weren’t so mischievous as to give me a rare bird challenge. The list was compiled to demonstrate the diversity and splendour of the region’s birds and there was the added prospect of seeing many lifers. I began preparing by searching for a birding guide – the team didn’t specify that I couldn’t get help from a true pro, and to add a modern flavour to the quest, the guide I chose was a man I met on Facebook. I had noticed Sammy’s frequent posts on our Facebook page, and how keen he was to share his knowledge with our community. His passion is infectious and he seemed very clued up on Kenya’s birds. So, when I began planning my Samburu bird quest, I naturally thought of him. Later on, during a memorable few hours in a bird hide overlooking a Samburu waterhole, Sammy explained his strategy for the Africa Geographic Facebook community. His aim is to share his photos as widely as possible, give out free advice and make as many friends as possible. Then, when those friends decide to visit Kenya, he might be top of mind as a guide. It’s a simple and clever plan that embraces the way people gather information and make travel decisions in the tech age, and it’s working. It’s also refreshingly different to the stodgy marketing we see from so many other travel industry brands.

Sammy learned his trade as a young man guarding his family livestock and making meticulous notes about the habits of the birds he saw. He is literally a walking encyclopaedia of Kenya’s birds: along with Lorenzo Barelli and Jaques Pitteloud, he recently co-authored the largest publication on birds in Kenya titled ‘Wings of Kenya’. Sammy is also a wonderful travelling companion and his assistance in planning my quest and organisational skills during the safari were of great comfort, freeing me up to absorb as much as I could.

I was completely unprepared for the sight that greeted me

I picked Sammy up in Nanyuki and we arrived at our first lodgings in total darkness, so I was completely unprepared for the sight that greeted me the next morning. Saruni Samburu Lodge is perched atop one of many rocky kopjes in the area with breathtaking views across the dry Samburu countryside. My chalet (some might say, palace) seemed to hang in mid-air, and the hilltop pool enhanced this sensation, perched, as it was, at the highest point of the kopje.

But there was no time for incredible vistas or a full appreciation of the scrumptious breakfast, I had birds to tick off, so I spent my first morning exploring the hilltop I was to call home for two nights. The sound of lions, hyenas and Nubian nightjars calling all night had whet my appetite and, being a newbie in this part of Kenya, I was soon scribbling down stunners like fan-tailed raven, Abyssinian scimitarbill, d’Arnaud’s barbets and Somali bee-eater – to name a few.
Sammy and I had the pleasure of walking with Saruni Samburu guide, Sumaro Lechakaole. Sumaro is an excellent birder, so I was in good hands and could relax, taking in the area’s rugged beauty while my guides worked the flocks. In the heat of late morning we had an amusing encounter with a distracted warthog that came trotting along the game trail towards us. With its mind on the fresh water ahead, it noticed us just 10 metres out, levitated in fright, then galloped off in undignified retreat, his stiff tail showing full cell reception.

A late afternoon drive deep into the Reserve offered a harvest of delights including Gambaga flycatcher, Somali golden-breasted bunting and purple grenadier.
After two wonderful nights at Saruni Samburu, we headed into the lowlands and our home for the next two nights – Elephant Bedroom Lodge. This relaxed tented camp is so named because elephants often loiter in camp, spread out as it is along the banks of the Ewaso Nyiro River. As you can imagine, this part of our birding quest was frequently interrupted by sightings of tuskers, but we were also treated to lion and leopard, giraffe-necked gerenuk and well as Grevy’s zebra, a long time bucket list tick for me.
Our driver and guide was Elephant Bedroom’s Antony Sawiana, who knows the area like the back of his hand. By the time we reached the riverine area, we had ticked off many of the birds on our quest, so the focus switched to the pursuit of specific species. We came across a horde of beauties including African golden oriole, Nubian woodpecker, Lichtenstein’s sandgrouse and steel-blue whydah. And on a few occasions, we bumped into our feline friends while scouring the thick riverside tangles for birds.

At one point, the red and yellow barbet we were ogling disappeared into a shady thicket and magically re-appeared as a young female leopard. She kept us mesmerised for quite some time as she sidled around our car before sashaying off on her own mission. During the last few hours of our anxious bird search, we rounded a corner to find a resting lioness, with rotund belly and attendant swarm of flies. Do we work the last few minutes of daylight to find the birds or spend time with the lioness? The lioness won.
My time in this dusty paradise was up all too soon and, thanks to a full day of strong winds that whipped up great flurries of dust, my birding days were cut short. Despite that, we ticked off 12 of the 15 species on the quest, plus hordes of others and 41 personal lifers. Rather than list every bird we saw, I thought I would pay homage to those that sparked my imagination by handing out a few awards. Have a look at the winners below.

The “Eye-Candy Award” goes to the elegant golden-breasted starlings with their bright yellow bellies, iridescent blue backs and long tail feathers – they reminded me of miniature versions of the blue-and-gold macaws I have seen in Brazil. The orange-bellied parrots come in for a special mention – parrots are always a highlight for me – as they screech past at high speed like they have somewhere important to go.

The “Amusement award” goes to those crazy bush chickens, the vulturine guineafowl, which we frequently encountered in large chaotic flocks.

The “Busy award” (and the birds I find most interesting) goes to the massive mixed flocks of small birds working the dry grassland for scraps of sustenance. Sometimes the ground seemed alive with industrious little birds like chestnut sparrows, white-headed buffalo-weavers and Donaldson-Smith’s sparrow-weavers.

The “Looks like nothing until you see its trump card” award goes to the elegant Rosy-patched bush-shrike, which blends into the drab shrubbery until you catch a glimpse of that bright pink splash, like an open-heart surgery patient on the loose.

The “Neatest dresser” award, and my favourite sighting, was in fact a 30-strong flock of black-cheeked waxbills flitting through the thick bush near a village.

And lastly, the “Cheeky award” goes to a common but magnificent little fellow called the superb starling – this great character of East Africa was always on hand in the camps, negotiating for table scraps and performing tricks. We had wonderful sightings of magpie, Fischer’s and wattled starlings as well.

Samburu is a wonderful dryland birding area, with some impressive game viewing thrown in for good measure. There is no doubt I will be back – for those three that escaped. In fact, I think I’m ready for that rare bird list.

For Samburu accommodation options at the best prices, visit our collection of camps and lodges: private travel & conservation club. If you are not yet a member, see how to JOIN below this story.

SIMON ESPLEY is a proud African, of the digital tribe, and honoured to be CEO of Africa Geographic. His travels in Africa are in search of wilderness, real people with interesting stories and elusive birds. Simon lives in Hoedspruit, next to the Kruger National Park, with his wife Lizz and 2 Jack Russells. When not travelling or working he is usually found on his mountain bike somewhere out there. He qualified as a chartered accountant but found his calling sharing Africa’s incredibleness with you. Simon’s motto is “Live for now, have fun, be good, tread lightly and respect others. And embrace change”. 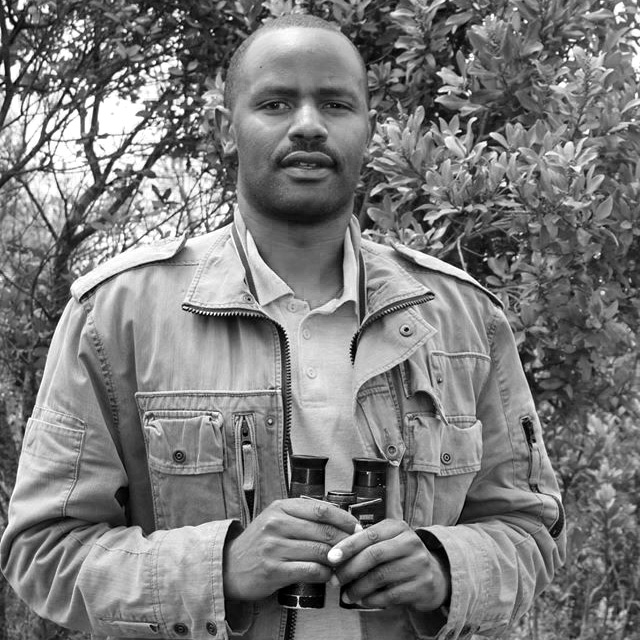 SAMMY MUGO was born in Central Kenya near the Aberdare Mountain ranges and spent his youth visiting the beautiful Aberdare Mountain Park. It was here, while watching guests birding, that his interest in birds was triggered. Sammy’s elder brother worked as a game ranger and he would visit him as often as he could. When his brother gave him a book on the birds of Africa, and a small pair of binoculars, he knew he wanted to see all the birds in his country. His real love of ornithology and photography of different bird species began. Sammy is co-author of Kenya’s largest publication on birds, ‘Wings of Kenya’, and he guided Africa Geographic director Simon Espley for his story SAMBURU SENSATIONS as well as contributed imagery of the stunning birds and mammals of the region.