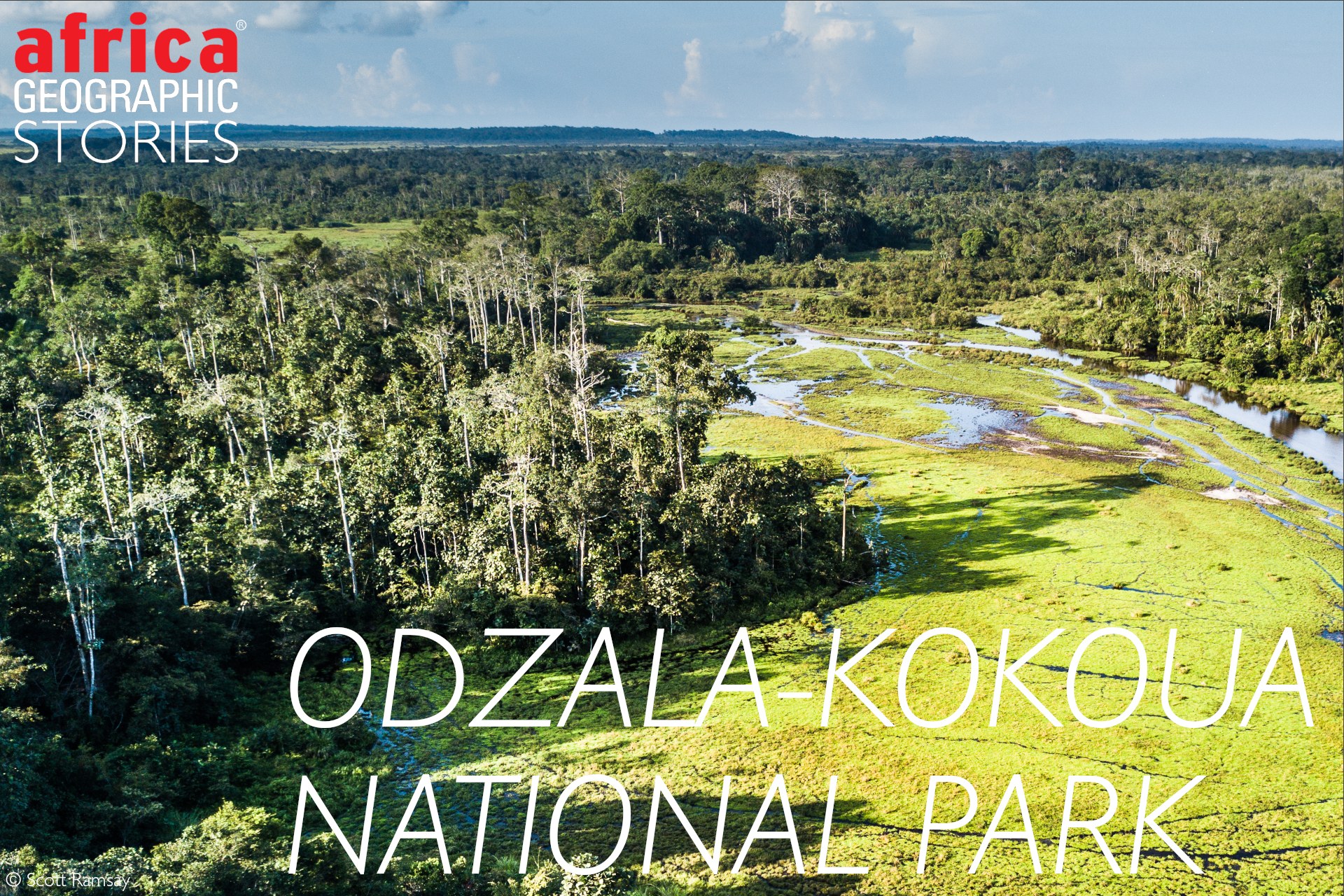 Along the Earth’s equator, vast, tropical rainforests spread across the continents like enormous green lungs, absorbing carbon dioxide from our atmosphere. These dark and often mysterious worlds are estimated to hold some 50% of the world’s terrestrial life forms – boasting higher biodiversity levels than any other habitat. They even play a role in controlling weather patterns. After the Amazon, Central Africa’s rainforest is the largest in the world. It includes the enormous section protected by Odzala-Kokoua National Park. 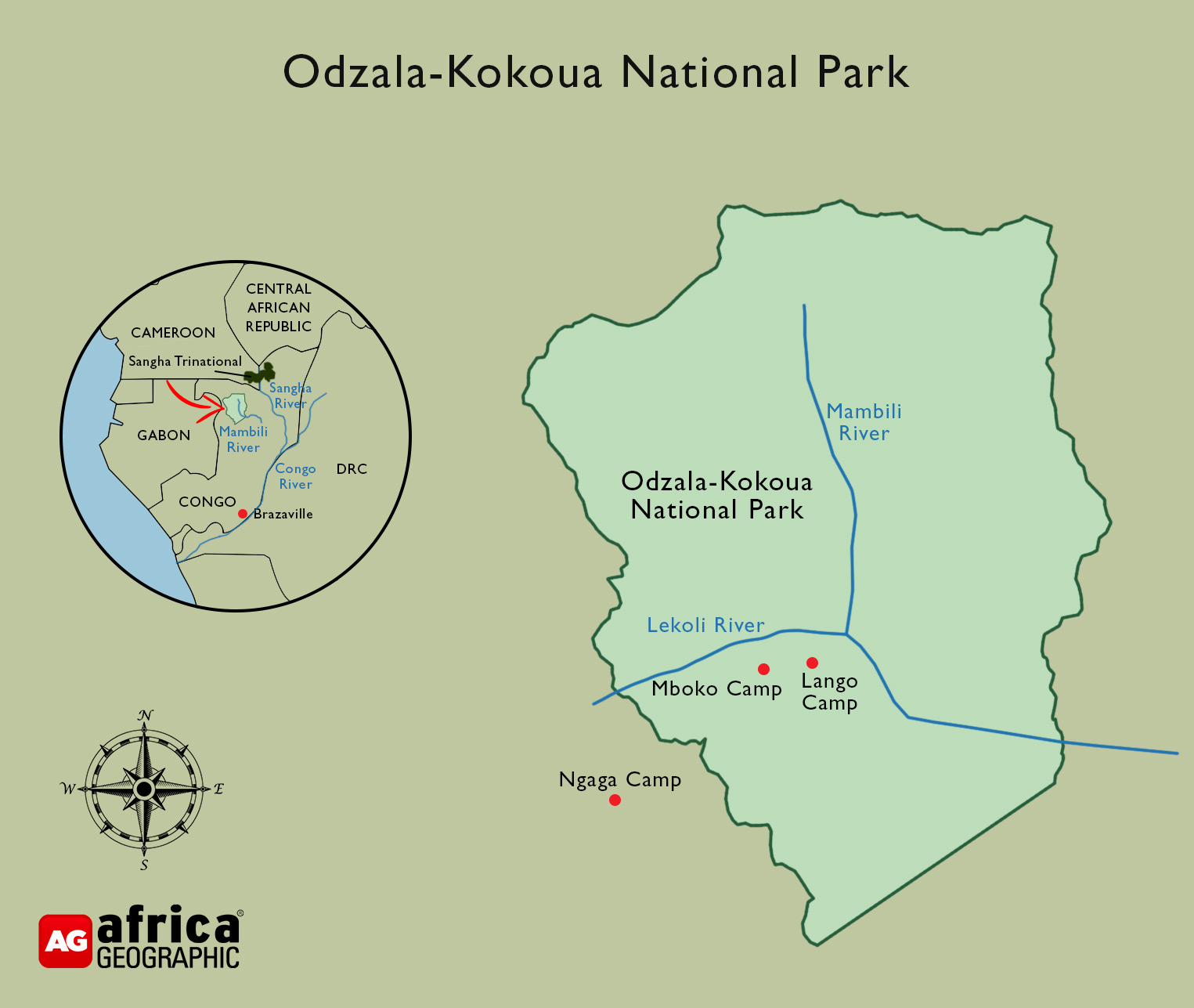 Odzala-Kokoua National Park or Parc National d’Odzala (Odzala from hereon) is one of Africa’s oldest national parks. The expansive 13,500km2 (1.35 million hectares) park is situated in the northern reaches of the Republic of the Congo (the ROC or Congo-Brazzaville – not to be confused with the Democratic Republic of the Congo to the east). As part of the much larger Congo Basin and an integral part of the TRIDOM Transfrontier forest, this magnificent reserve encompasses the famous forests, colourful swamps and vibrant swathes of savanna brimming with life.

The park has always been somewhat off the beaten track, but its fortunes turned when, in 2010, African Parks entered into a 25-year-long agreement with the ROC’s Ministry of Forest Economy, Sustainable Development and Environment. The park has been operating under African Parks management ever since. African Parks also runs the Sangha Trinational further north on the borders of the Central African Republic and Cameroon. Odzala Discovery Camps now manages the park’s three camps.

The complex and intricate community initiatives by African Parks recognise that the fortunes of the park and its people are inextricably linked. Their efforts even included an amnesty program, where poachers were allowed to surrender their weapons and train as park rangers. The result is a thriving ecosystem.

The park’s multitudinous habitats encompass everything from dense forests to open savannas, each with unique characteristics. The northwest’s dense forests open up into what is termed Marantaceae forest – defined by the flowering plants of the Marantaceae or arrowroot family that cover the forest floor. These give way to gallery forests lining the floodplains of the more extensive waterways such as the Mambili and Lekoli Rivers. The dry savannas are dotted with enormous termite mounds that create an other-worldly atmosphere.

However, the most distinctive characteristic of the Congo rainforest is the forest baïs – island clearings in the sea of trees. Here, marshy areas rich in minerals and salts attract a plethora of wildlife, from enormous flocks of green pigeons to critically-endangered forest elephants.

Of the region’s megafauna, the forest elephants and western lowland gorillas are probably the park’s two main drawcards. A wildlife census conducted by African Parks in 2012 revealed that the park is home to some 9,600 forest elephants, and those that inhabit the more popular parts of Odzala have gradually become more accustomed to people. There are very few places in Africa where you can kick back after a long day’s hike and watch a forest elephant browsing metres from the lodge deck.

Despite the devastating effects of the Ebola outbreak in the 2000s, Odzala is still a population stronghold of the western lowland gorilla and boasts the highest density on the continent. The gorilla numbers have gradually recovered, and there are now estimated to be around 25,000 gorillas in the park. The western lowland gorilla, a subspecies of the western gorilla (Gorilla gorilla), is the smallest of all subspecies. There are three habituated groups, one exclusively accessed by researchers and the other two by tourist groups led by expert guides.

Gorilla trekking has become increasingly popular, and spending time with these sentient apes is considered by many to be an almost spiritual experience. In Odzala, following the gorillas is particularly exciting because lowland gorillas are more arboreal than their mountain counterparts (such as those viewed in Rwanda or Uganda), and they are almost constantly on the move. The expert guides and trackers know the forest and the gorillas intimately. There are also wild chimpanzees in the forest, though none of the groups has been habituated yet.

Odzala is also one of the best places in Africa to see the bongo – a striking spiral-horned antelope. These shy animals are sometimes spotted on the forest baïs, along with sitatunga. The final two ‘Forest Five’ members – the forest buffalo and the giant forest hog are also drawn to the saline soils of the baïs.

Odzala-Kokoua is a naturalist’s paradise, bursting with almost incomprehensible biodiversity at every turn. Scientists estimate that the forest is home to some 4,500 species of plants, at least 100 mammal and 460 bird species. The open Marantaceae forest teems with insect life, and crocodiles, fishes, and frogs populate the swamps and rivers.

Expect to be fascinated by the variety of monkeys leaping through the canopy and intrigued by the possibility of spotting one of several small duiker species or even a serval or African golden cat. Though seldom seen, camera trap studies have revealed the presence of leopards, and spotted hyenas prowl the outskirts of the camps.

The antics of the red river hogs, with their hilariously tufted ears, are guaranteed to keep you entertained, while clouds of delicate butterflies add splashes of colour to the forest scene.

The birding in Odzala-Kokoua is excellent and the camps have access to a network of trails, decks and boardwalks specifically designed to aid eager birders. You might find African grey parrots or Hartlaub’s ducks drawn to the salty water of the baïs or bare-cheeked trogons and blue malkohas hiding in the trees.

With long-term stability in the Republic of Congo, tourism infrastructure has improved immeasurably. Odzala-Kokoua now offers tourists a safe way to experience one of Africa’s most breathtaking ecosystems. Even for the seasoned traveller, Odzala-Kokoua is a safari experience unlike any other.

A visit to Odzala-Kokoua is about adventure and discovery in one of Africa’s wildest spaces – it is not for the luxury-minded traveller looking for a laidback holiday. Most exploring is done on foot, often wading through the various small waterways or paddling along the Lekoli River in a kayak and admiring the russet-coloured forest buffalo feeding along the banks. The camps offer guided night walks to investigate the creatures that come out to play when the sun goes down for those entranced by the forest and eager to learn more.

Of course, it is always important to take a moment to soak in the atmosphere. So, a day spent scrambling along forest paths in pursuit of gorillas can be rewarded by sipping sundowners and soaking tired feet in a crystal-clear stream, serenaded by the strident cacophony of the rainforest. Or perhaps lounging on the lodge deck, admiring the plethora of animals drawn to the baïs at sunset.

There are only three accommodation options – two camps within the national park (Mboko and Lango) and a third (Ngaga) in a private concession on the park’s fringes. All are designed to blend seamlessly into the scenery by virtue of the fact that most bear an uncanny resemblance to a hamerkop nest (albeit an extremely luxurious one). It is important to bear in mind that each camp offers a different way to explore the park – gorilla trekking is only conducted from Ngaga, for example – so the ideal Odzala-Kokoua trip would encompass all three.

Apart from the extraordinary wildlife, the magic of Odzala-Kokoua lies in its remote, undiscovered status. It is not unusual for a tourist to be one of only a handful exploring over one million hectares of pristine, Central African habitat. The verdant greens of the park’s swamps and primary forests are spectacular all year round, though there are officially two rainy seasons: from March to May and September to October. It is a rainforest on the equator, so wet weather is inevitable, but with sufficient preparation and sensible packing, this will not put a damper on the activities. Two pairs of comfortable shoes are a must, as is waterproofing for all camera gear, books, and binoculars.

Malaria is present in the ROC, and guests are advised to take suitable precautions and chat with a medical professional before travelling. A yellow fever vaccine is compulsory. For those wishing to visit the gorillas, an additional form must be completed to confirm that the guest is free from measles, polio, and tuberculosis.

Odzala-Kokoua National Park is one of Africa’s hidden gems – a testament to the resilience of both the continent’s people and her ecosystems. It offers an unparalleled safari experience and a complete immersion in one of the most pristine wild spaces imaginable. Here visitors can draw in a lungful of the purest air filtered by ancient forest and step forward into a world of adventure and spectacular natural beauty.