The decision by the Botswana government to call for tenders for the development of eight lodges of 75 beds each on the Chobe Riverfront within Chobe National Park (CNP) has raised concerns amongst stakeholders and environmentalists.

This process seems to be going ahead, despite stipulations in the current gazetted CNP management plans that no new lodge developments should take place within the park. Antagonists are questioning the Botswana government’s commitment to wildlife conservation and raise concerns that this tender process is being fast-tracked via allegedly illegal and unconstitutional means.

The government also appears to have disregarded existing USAID-funded 2020 CNP Management Plan Review recommendations that no further lodges be developed within the national park. In this regard, the recently edited draft CNP Management Plan (which has not yet been gazetted) goes against advice by consultants as evidenced by the existing management plan. 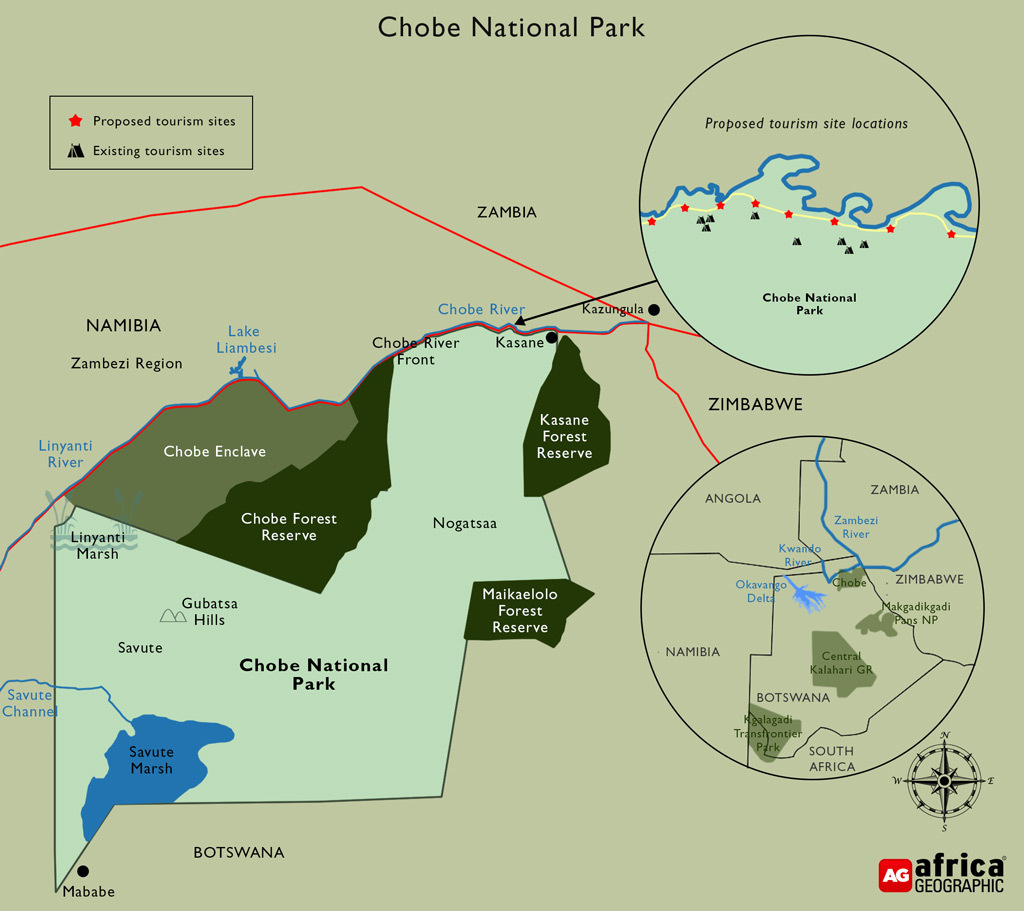 The country’s Ministry of Environment, Natural Resources Conservation and Tourism recently invited citizen-owned companies and consortiums to submit ‘expressions of interest’ to lease eight lodge sites within an area on the Chobe Riverfront , with little notice provided and reportedly without following due process – threatening the survival of Chobe National Park. The eight lodge sites measure three hectares each along the Chobe River and are spaced two kilometres apart. Tender processes for three additional lodge sites (totalling 11) proposed in the updated draft management plan – in the Madamboza and Ngwezumba Medium Intensity Use zones – have not yet been initiated.

The Ministry’s invitation sent earlier this year for Expressions of Interest (EOI) called for parties to submit ‘Management Plans’ related to the sites in question – for the development and operation of tourism sites lease periods of fifty years. Applicants were expected to attend a compulsory site visit to proposed sites on 3 March of this year, and EOI applications were due on 21 March. No affected entities or stakeholders were given the opportunity to consult and discuss the proposed development of lodges before the EOI invitation was published.

Various stakeholders, including public and private corporates, SMMEs, owner-operated establishments, NGOs and private citizens (under the name Concerned Stakeholders Chobe District) filed a formal opposition to these development plans in a Letter of Objection on 7 March. Various concerns were raised by the parties, stating that the “clandestine” manner in which government rushed the tender process raises suspicions of illegal and perhaps even unconstitutional conduct by the Ministry.

“The rushed time frame offered on that brief public notification to participate in the EOI was unrealistic and provides ample speculation to the legality and inclusiveness of the process,” states the Letter of Objection. “It begs the question, had select participants already been established/offered the chance to tender before the all-too-brief public notice was made?”

Botswana’s government appears to be fast-tracking the initial allocation of land in order to speed up the allocation of the sites and allocation of land to empower Batswana. This was related during a session of Parliament at the end of March by the Minister of Environment, Natural Resources Conservation and Tourism, Philda Kereng, who stated that the management plan had been updated with technical advice and in fact showed that up to 11 lodge developments could be established on the Chobe Riverfront. “The sites that could be built there are 11 [sic] but we are going for eight because we don’t want high traffic there,” she said. Furthermore, Kereng stated that bid winners would conduct EIAs and then incorporate these into their specific plans for the sites.

This is a complete about-turn by the government, which in recent years (under different administration) rejected proposals for development within the CNP Riverfront, including for the establishment of an elephant orphan sanctuary, the construction of a communications tower by Botswana’s telecommunications regulator and a lodge proposed by the Botswana Defence Force (BDF) Welfare Trust Fund. At the time, the Department of Environmental Affairs stated no further development of lodges within the CNP should be considered as the environmental and long-term economic impacts of such developments far outweigh any perceived short-term economic benefits. In the 2017 rejection of the BDF’s proposed lodge, the Department stated the increase in the carrying capacity of the area created by one new lodge on the Chobe Riverfront  would “significantly put pressure on the environment, the natural resources and the Chobe River front [sic] area.” Only five years later, the government is pushing for the development of eight lodges in this area.

In a further twist, consultants to the USAID-funded 2020 CNP Management Plan Review noted with concern that updated versions of the Management Plans in question appear to have been altered after they signed off on their approvals.

Consultant Lin Cassidy requested that the names of the USAID-funded team be removed from the latest approved plans, stating “we have learned that versions of [these] management plans…. that we submitted to the Department of Wildlife and National Parks (DWNP) and which were accepted and approved by DWNP, may have been changed since our submission and completion of our contract.”

The Hospitality and Tourism Association of Botswana (HATAB) has added its voice to those in opposition to the developments, stating these will have a “very significant impact” on the Chobe Riverfront by increasing congestion and environmental pollution, restricting animal movement and “placing increased pressure on already threatened species such as the Chobe bushbuck” – especially during the lodge construction process. Once lodges are up and running, the maximum 75 beds for each facility would potentially mean 600 more people in the park at peak times – in addition to support staff for each lodge.

While the stakeholders are not in opposition to economic upliftment and the creation of employment opportunities, there are major concerns that the proposed developments will threaten the environmental wellbeing of the national park, and that the tender process has been unconstitutional. The proposed developments could contribute to human-wildlife conflict, threatening animal populations that are already contending with encroaching agricultural developments and human settlements. The new lodges will result in the loss of 8km of wildlife corridors and up to 8km of wildlife-viewing roads within an already limited road network. “The impact of increasing an already high-traffic volume by an estimated minimum of 50 game viewing vehicles will be devastating to the quality of the tourist experience and will certainly change wildlife behaviour and distribution,” states the Letter of Objection. “The myriad environmental impacts seem not to have been considered at all.”

The letter raises concerns that expansion of these lodge sites, which are bounded by the main road to the south and annually flooded plains to the north, can only occur laterally east and west, consuming more river frontage and exacerbating the degradation of the ecosystem.

Further objections to the tender process have been raised by young tourism entrepreneurs, who say the specifications, which require companies to own existing tourism licences, favour established businesses and do not support the creation of opportunities for the youth of Botswana, reports Mmegi Online.

“Our interpretation is that only companies that are operational and own a tourism-related business are favoured,” reads a complaint by Eco Tours director, Othusitse Ranko. “It is our considered view that the above is discriminating to individuals and companies, especially the youth who haven’t had an opportunity before to own and operate tourism-related facilities and who by default won’t have the required tourism licence.”

Stakeholders opposing the developments are in agreement that the oversaturation of the market by businesses is unsustainable and could lead to all-round collapse – of both the delicate Chobe River ecosystem and of existing tourism operations within CNP. “The jewel of Botswana requires protection,” read the objection by HATAB, “and thus we encourage our government, developmental and environmental partners to protect our parks for the benefit of our posterity.”