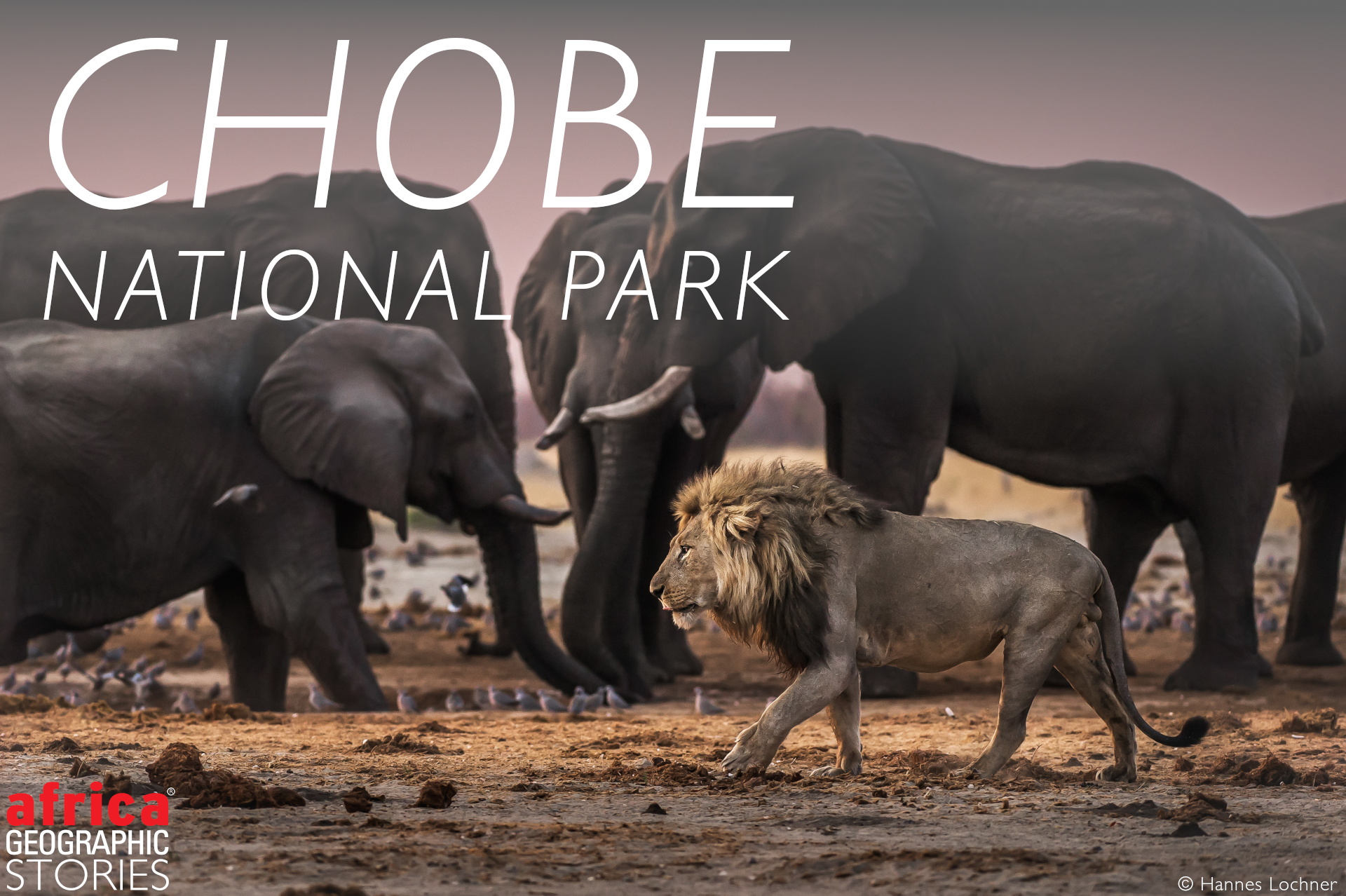 Many places offer excellent elephant viewing, but Chobe National Park of Botswana boasts the world’s highest density. From rich riverine habitats to vast dry savannas, names like Chobe, Savute, and Linyanti are imbued with the spirit of safari legend. Of the many safari wonders on offer in Africa, time spent in the company of elephants is always something to be treasured. With their complex intelligence and delightful social dynamics, every sighting of these grey giants is unique – whether it involves babies swinging their trunks around, a breeding herd cooling off in the mud or the calm towering presence of an old bull. 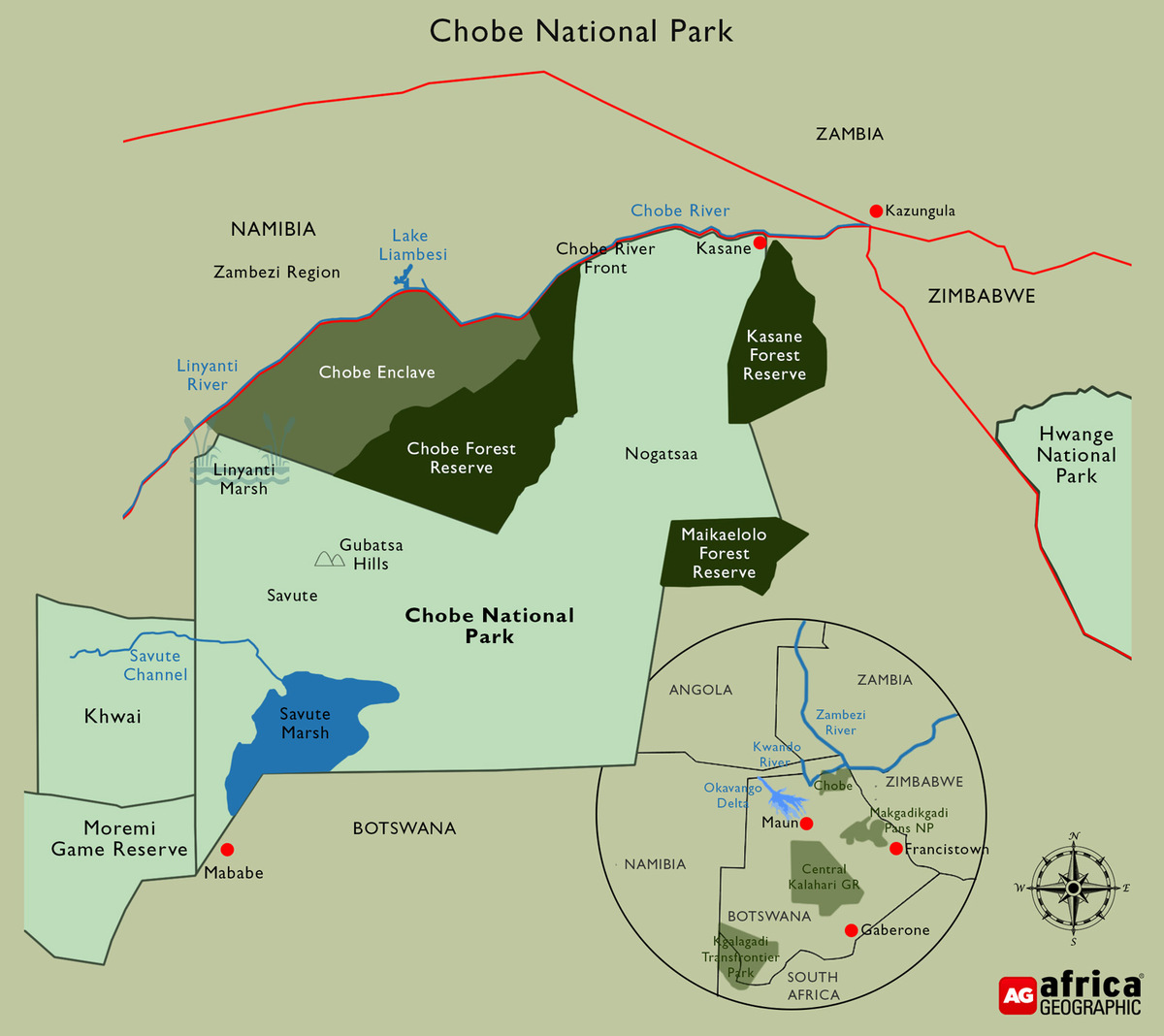 The Chobe region is dominated by Chobe National Park (NP), an 11,700km2 (117 000 hectares) park situated in the northeastern corner of Botswana. As Botswana’s third-largest national park, it is arguably its most biodiverse, divided as it is into four distinct habitat regions (more on that below). The park is also surrounded by private and state concessions and reserves. These protected areas act as buffer zones around the park and extend to and link with other reserves to create a massive open system for wildlife movement. This enormous Chobe-Linyanti Ecosystem is open to Namibia’s Zambezi Region to the north, the Okavango Delta region to the west and Hwange National Park and surrounds in Zimbabwe to the east.

The Chobe River marks the border between Namibia and Botswana. Its banks and flood plains are Chobe NP’s most popular destinations, attracting vast numbers of wildlife (and eager tourists) during the dry season. The river enters Botswana further west as the Kwando River, which historically would have linked with the Okavango River to feed the once enormous Lake Makgadikgadi. The same tectonic shifts that created the Okavango Delta and, ultimately, Victoria Falls redirected the paths of the rivers. The Kwando River divides into the Linyanti Swamps and continues east as the Linyanti River, cutting a jagged path across the country’s north. It feeds into the seasonal Lake Liambesi before finally emerging as the Chobe River. Its confluence with the Zambezi River marks “Africa’s Four Corners” – the meeting point of Namibia, Zambia, Botswana, and Zimbabwe. When the Zambezi is in flood, it pushes water back up through the confluence, making the Chobe flow in the opposite direction.

These vast waterways are the lifeblood of the Chobe region, and whether viewed by boat or safari vehicle, the scenery and wildlife on display are, quite simply, breathtaking.

Chobe National Park can be conceptually divided into four distinct areas, each with its own unique character, vegetation, and wildlife highlights. These are the Chobe Riverfront on the northeastern edge of the park, Linyanti to the north-west, Savute to the south and the Nogatsaa area/Ngwenzumba Pans.

Also sometimes referred to as the Serondela area, this is the most popular part of the park and is easily accessible from the nearby town of Kasane. Unsurprisingly, given the availability of water, this region has the highest wildlife concentrations and offers some of the best boat-based safaris in Africa. Naturally, many luxury lodges offer packages that include various activities, including game drives, guided walks, and boat trips. Self-drive visitors can opt to stay at the public Ihaha Campsite.

The lush floodplains attract enormous herds of elephants, buffalos and zebras. Away from the river, the deep sands are dominated by gorgeous forests with Zambezi teak (Baikiaea plurijuga) as the starring attraction. The Chobe Riverfront is also home to Botswana’s only puku population (a fawn-coloured relative of the waterbuck that is more commonly seen in Zambia).

The western stretch of the park is Savute (occasionally spelt Savuti), which borders Moremi Game Reserve to the southwest. Wild and remote, this region is popular with self-drive travellers who approach from Botswana’s safari capital, Maun, and aim for the Savute Campsite, the second of Chobe NP’s public campsites. Perhaps the most famous attraction (and the most geographically significant feature) is the enigmatic Savute channel, which empties into the Savute Marsh. This once-forgotten river was dry from the late 19th century until it flowed some 75 years later in 1958. Since then, it has followed an entirely unpredictable rhythm, drying up for decades at a time, seemingly unaffected by neighbouring floods (though possibly influenced by small tectonic movements), before flowing once again. The haunting silhouettes of dead trees lining the Savute Marsh bear a sun-bleached testament to the effects of the channel’s temperamental nature.

In an often-arid region, the presence (or absence) of water changes the landscape and forces the wildlife to adapt in new and innovative ways. Regardless of whether or not the channel is flowing, animals have to adjust their behaviour to the pattern of the seasons, from wet to dry and back again. The lions of Savute have become famous for their dry season elephant hunting techniques, often targeting adolescents on the fringes of breeding herds and using numbers and sheer determination to secure themselves the biggest meal possible. Leopards stalk the outskirts of the drying pools of the marshes, displaying no cat-like concern for cleanliness when diving into the mud to catch the flailing catfish.

The savannas are dotted with rocky outcrops where leopards seek refuge and survey the beautiful landscape. The hills were also the haunts of ancient humans who lived to the pulse of the seasons in Savute. The rocky outcrops of the Gubatsa Hills are decorated with their ochre drawings.

This delta-like and predator-rich section of the park lies in the north-western corner, bordered by the Linyanti River and Namibia to the north and linked to the Okavango by the Selinda Spillway. Though getting to Linyanti is something of a journey in itself (and occasionally impossible by road during the height of the wet season), the effort is well rewarded by one of the most spectacular and unspoilt wilderness areas in Southern Africa. Another watery wonderland, the Linyanti Marshes are divided by a series of lagoons and waterways just begging to be explored by motorboat or in a mokoro (a traditional canoe-like vessel). The marshy reedbeds hide unusual antelope such as sitatunga and red lechwe. The open habitats away from the riparian woodlands are perfect for viewing Linyanti’s famous packs of African painted wolves (wild dogs).

Though most of the accommodation options are at the higher end of the luxury spectrum, there is a third public campsite in Linyanti. Private concessions like Linyanti Game Reserve and Selinda Game Reserve expand the opportunities to explore the Linyanti ecosystem beyond the confines of Chobe NP. The surrounding private concessions also offer additional budget-friendly options.

The fourth and final region of Chobe, Nogatsaa, is known for a series of clay pans surrounded by mopane woodlands and grasslands. It is notoriously difficult to get to, with the roads alternating between wily thick sand and disagreeable black cotton soils. This tends to keep all but the most hardcore nature enthusiasts at bay, resulting in a pure and unspoilt wilderness experience for those who do brave the journey.

Chobe NP is a safari enthusiast’s playground – an unapologetic spectacle of Africa at her most wild. Quite aside from the more “traditional” wildlife, few people realise that Chobe is part of the longest mammal migration in Africa: the Chobe-Nxai Pan zebra migration. Every year around 20,000 zebras make a round trip of nearly 1,000km, spending the dry months around the Chobe River from June until early November, before massing and returning south to Nxai Pan. Chobe is also a fantastic place to view some of the more unusual antelope like sable, roan, tsessebe, puku, oribi and lechwe.

The waterways are filled with pods of hippos that emerge to mow the grasslands at night or during cool weather. They share their world with the Nile crocodiles, which prey on everything from incautious lions to the savage-looking African tigerfish. Undeterred by this array of teeth, elephants take to the water during the heat of the day, swimming with surprising grace for such massive animals and using their trunks as built-in snorkels. The enormous troops of baboons that spend their days foraging for fruit around the riverine forests are often overlooked but are hugely entertaining.

The birding is as remarkable as the mammal viewing, with over 450 species on offer. Of course, the water birds are of particular interest. Even the most disinterested birder could not fail to be charmed by the oversized feet of lily-trotting jacana chicks or the water-shading antics of the black heron. Every year, a noisy cloud of pink heralds the arrival of the southern carmine bee-eaters and birders can spend time at the Kasane rapids searching for rock pratincoles, African skimmers and Pel’s fishing owls hidden in the huge riverine forest trees.

Botswana’s Chobe National Park is the quintessential Southern African safari experience, bursting to the brim with extraordinary wildlife, spectacular scenery, and a constant sense of adventure. The remote areas offer the perfect opportunity to unplug and enjoy a digital detox while serenaded by Chobe’s birds, beasts, and frogs. The Chobe River can be enjoyed on a day’s river cruise or, for those wishing to take in the experience over several days, on one of the region’s houseboats.

The dry season from June until October is the busiest time in the park. For good reason – the dwindling drinking water concentrates the wildlife around the river and remaining water points, and the sightings are extraordinary. However, the green season offers its advantages, including the arrival of migratory bird species, a baby boom, and lower accommodation rates. During the height of the rainy season, many of the roads become waterlogged and difficult to navigate, so self-drive travellers would be well advised to plan their routes well and ensure some level of 4WD driving proficiency.

Chobe NP has three public campsites for those travelling on a budget: Ihaha, Savute and Linyanti. These are extremely popular during the dry season and need to be booked well in advance to avoid disappointment. The town of Kasane – which briefly rose to fame as one of Elizabeth Taylor’s wedding destinations (an honour shared by just seven other venues) – offers several budget accommodations outside of the park. Visitors looking for more exclusive alternatives can take their pick from any number of luxury lodges and, during the high season, mobile camps.