Posted on May 5, 2021 by Guest Contributor in the Opinion Editorial post series.
ShareTweetPinEmailShareShareLinkedIn

The Chobe River lions face an uncertain future with various barriers hampering recruitment, dispersal and immigration. To the north, hostile farmers in the Zambezi region of Namibia are intolerant of apex predators on their farms. In every other direction, fragmented protected areas and human settlements impede lion movement. 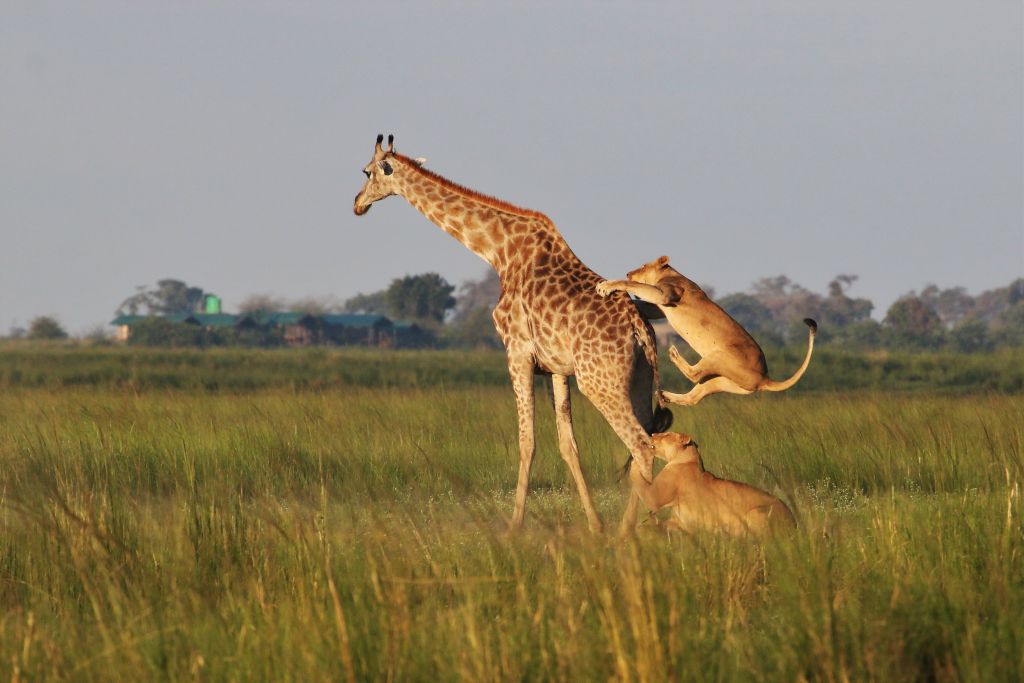 Background to the Chobe Riverfront

The Chobe River stretches from Lake Liambezi (Namibia) in the west to Kazangula in the east, where it flows into the Zambezi. The western section of the river is populated by cattle, goat and small-scale crop farmers. The Botswana-Namibia border, which is the Chobe River, cuts the floodplain, with the majority falling on the Namibian side (Zambezi Region).

The Chobe National Park protects the lions on the Botswana side where they tend to hunt along the river or on the floodplains. They seldom stray too far into the sandveld teak forests south of the river because of the limited prey. 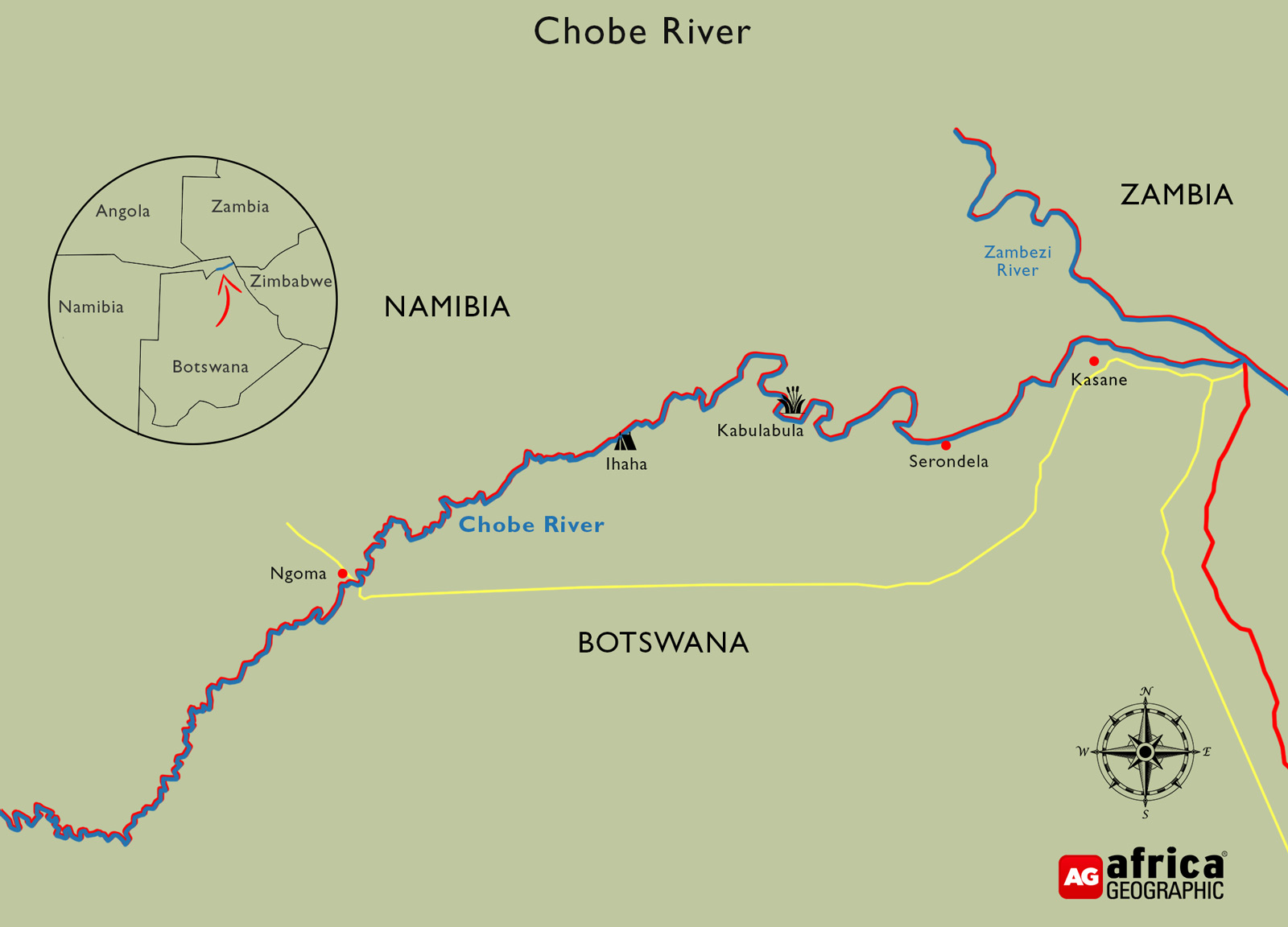 In 2017, there were approximately 20 lions on the riverfront: ten cubs, two old males (at least ten years old), a subadult female, and six adult lionesses. In early 2018, the pride swam across the Chobe River to the Namibian side. It was a fatal day. Five of the six lionesses were shot by Namibian farmers. A Chobe guide with his guests watched in horror as a Namibian farmer cut off the lions’ paws and waved them at the tourists. Over the next month, all the cubs died from starvation.

The subadults survived and the remaining adult lioness (called Broken Tail) settled in a small territory of her own around the Serondela picnic site. In October 2020, she birthed three cubs. The two subadults, possibly siblings, were gradually joined by four lionesses from the south. The young male disappeared and was not seen after July 2018. Possibly not coincidentally, about that time, two new males arrived – Caller and Tom-Tom. Scarface, one of the older males, had his leg broken in a skirmish with the new males and the Department of Wildlife and National Parks euthanised him when he took refuge at Chobe Game Lodge. The other old male died in the territory not long after.

Two of the lionesses soon fell pregnant. One, Snips, had five cubs in December 2019, and the other, Teddy Bear, had two cubs in February 2020. One cub, called Lost and Found, wandered into the village of Kasane and was rescued by some tourists, who put him at the edge of the park away from people and traffic. His mother found him eventually, and he was safely back with the pride as of November 2020. Another lioness, Small Girl, mated with one of the new males in early 2021.

The two males roam from west to east all along the river, seldom staying with the pride for long. They are very attached and every greeting after separation is marked with joyous, cub-like playing. They have enjoyed an unchallenged three-year run.

Broken Tail, the lioness which returned from Namibia after the massacre, remains alone and produced three cubs (most likely sired by Tom-Tom) in November 2020. She occupies a territory opposite Serondela Lodge on the Botswana side of the river. During the green season from late November to mid-April, the vegetation is very thick and she hunts smaller game. In the dry months, she targets buffalo calves when the herds come onto the floodplains.

The northern Chobe Lions are not troubled by hyenas, of which there are very few. Other predators such as wild dog are sporadically distributed but seem to avoid any area that the lions occupy.

The lack of new males indicates a dearth of immigration. Researchers have noted lions at Ngotsaa in Chobe National Park, about 50 km south of the Chobe River. This is the next pride to the south. There are lions in the Kachikau area, 76 km west as the crow flies, but this is a village region. It is apparently not a big pride and is likely struggling to survive given the farming activities and villages.

The Chobe west of Kabulabula sometimes dries up and lions can easily cross to Namibia. North of the border, the Namibian farmers allow their cattle to graze right up to the border and sometimes over it at Ngoma. It is an irresistible temptation to lions and they quickly learn what soft targets the cattle are. The discovery probably encourages hunting forays north over the border in search of cattle.

Once the lions are in Namibia, the laws become murky – Botswana cannot protect them. The Namibian farmers can legally kill lions if their livestock is threatened. The lions, therefore, depend on the goodwill of the farmers – difficult to muster if they have just lost cattle to border-hopping predators.

Chobe is part of the Kavango Zambezi Transfrontier Conservation Area (KAZA) which aims to secure the sustainable use of natural resources for both wildlife and local people in a cooperative effort by Botswana, Namibia, Zambia, Angola and Zimbabwe.

In Chobe and the Enclave (comprising the villages of Mabele, Kavimba and Kachicau), WildCRU (a conservation research unit) has been running several human-predator conflict mitigation programmes. Communities are encouraged to kraal their cattle at night in predator-resistant kraals. These kraals are funded and built mostly by WildCRU. Owners must make a small contribution to the total costs and help to erect the structures. WildCRU also employs community guardians from each village who investigate any reports of lion conflict. To date, WildCRU has built 26 predator-resistant kraals in the Enclave. They hope to build a further 20 during 2021.

WildCRU, through Dr Jess Isden, has also introduced a lion chasing programme. By using vuvuzelas and running towards lions, the lions disperse. Astounding and insane as this sounds, the vuvuzela has been used to mitigate lion conflict with some success in parts of Zimbabwe.

Some of the lodges in the area, such as Chobe Game Lodge and Serondela Lodge, have established a compensation scheme for farmers who have lost cattle to lions. Farmers are also rewarded if they can prove they have chased lions back into the park.

In the Zambezi Region of Namibia, east of Ihaha, where the pride spends most of its time, farmers don’t have the same tolerance. There seems to be an unsustainable number of cattle feeding on the floodplain, many of which do not belong to the herders but to owners who send their animals to the area for grazing. There are more than 300 000 cattle feeding on the floodplain between Sedudu and Ngoma. Game is naturally scarce due to human and livestock pressure. Recently, another NGO in Namibia, the Kwando Carnivore Project, has started conflict mitigation work in the area and this will hopefully help protect the lions and other predators.

Lions are a major attraction for tourists and their absence will drastically, negatively affect tourism along the Chobe River.

All the tourism enterprises on both the Namibian and the Botswana sides would like to see better protection for wildlife and cooperation between Namibia and Botswana. Tourism could have long-term benefits for the area. Not only does it create jobs, but it trains people who can form their own tourism-related businesses. Rural communities need to see the potential in tourism without necessarily giving up their farming practices.

Negotiations with various stakeholders in Namibia continue and seem to be bearing fruit. A lion group has been created with several Namibian officials and a few cross-border meetings have seen some commitment from both sides. There are already several lodges on the Namibian side, thanks to the vaunted community conservancy model. The future for the Chobe River lions is uncertain but hopeful.