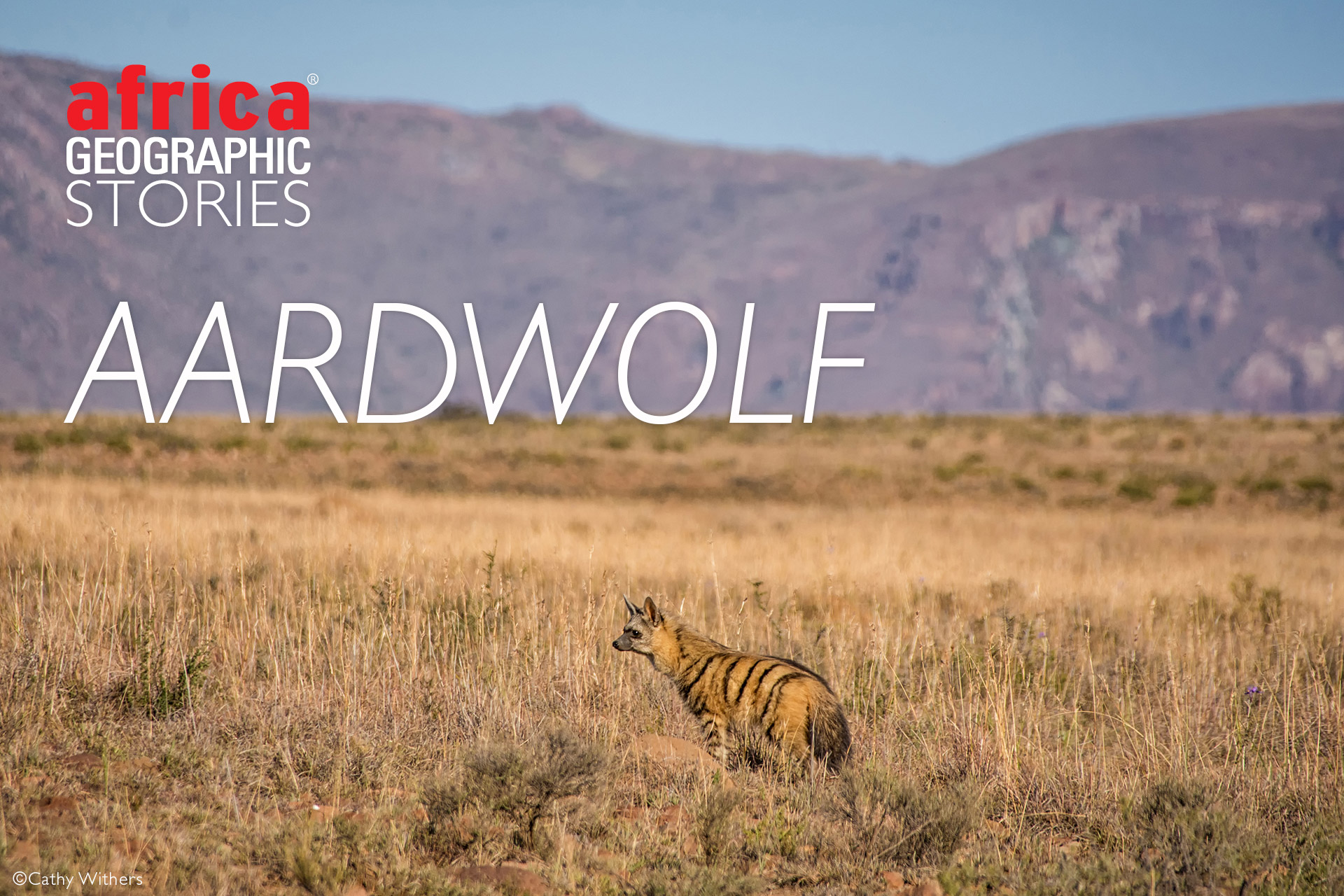 The “earth wolf” with a particular palate

The word carnivore in Africa instantly conjures images of long canines and sharp claws – powerful predators like lions or leopards, capable of rending flesh from bone or enthusiastic painted wolves coursing after their equally speedy prey or perhaps even the sinuous athleticism of Madagascar’s fossa. Yet one of the most highly specialized carnivores on the planet wanders the grasslands, deserts, and savannas of the African continent, largely unnoticed and unrecognized. This is the Aardwolf.

Africa’s aardwolf is one of the continent’s most underappreciated yet charming characters. Unlike their larger, spotted cousins, aardwolves are, for the most part, extremely shy and often elusive – few visitors are fortunate enough to spend any time with them and even fewer genuinely appreciate just how lucky they are to do so. For out of all the hyena species, the aardwolf is unique: the last of the dog-like hyenas to survive an evolutionary purge by virtue of its somewhat unusual diet. 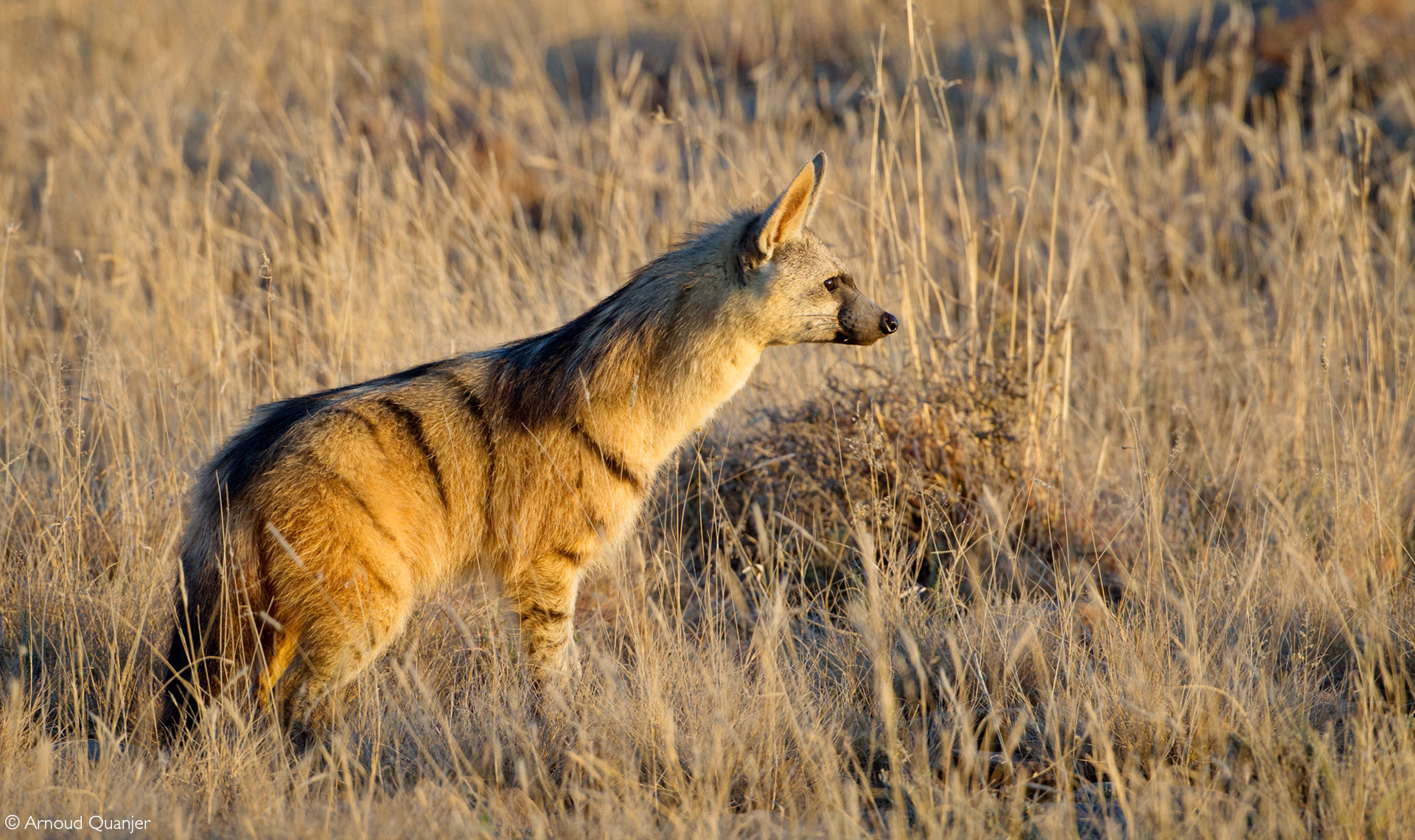 The black sheep of the family

The aardwolf (Proteles cristata) is a member of the Hyaenidae family, along with the spotted hyena (Crocuta Crocuta), the brown hyena (Parahyaena brunnea) and the striped hyena (Hyaena hyaena). Of all the hyena species, the aardwolf looks most like a striped hyena, though this is where the similarities end.

The ancestral origins of all four species can be traced back to a civet-like hyena species known as Plioviverrops that thrived throughout Eurasia around 20-22 million years ago. Devoid of canine competition at the time, the early hyenas provided a particularly neat example of convergent evolution – steadily developing longer legs and pointed jaws like those of the canid species in North America. From there, evolution began to follow two different specializations, producing a dog-like hyena lineage that chased down smaller prey and a bone-crushing lineage of hyenas capable of capitalizing on the kills of the large felid species. By 15 million years ago, 30 different species of hyenas roamed early Earth, most of which were dog-like hyenas not dissimilar to jackals.

Then, for the hyenas at least, catastrophe stuck sometime between the 5 to 7-million-year mark. Climate changes resulted in a gradual decline in dog-like hyenas and canid species began to cross the Bering land bridge (between present-day Russia and Alaska) into Eurasia. What followed, presumably, was an evolutionary war of competition, with the canids emerging victorious. One by one, the dog-like hyenas vanished, barring a scattered few: the ancestors of the aardwolf, now the sole survivor of an evolutionary dead-end.

Fussy eating is not always a bad thing

Most evolutionary biologists point to one particular trait responsible for the aardwolf’s survival – the ability to digest the toxic terpene excretions of termites. Myrmecophagy (eating termites or ants) is surprisingly rare in the mammal kingdom and it is a trait typically associated with more ‘primitive’ species such as the pangolin or aardvark. (For the sake of clarity, it is important to note that while many mammals feed on termites or ants on occasion, myrmecophagous mammals are entirely dependent upon them.) What makes the aardwolf so fascinating is that its origin is considered to be relatively recent, with the oldest member of its family tracing back to around between 10 and 20 million years ago (unlike pangolins or aardvarks, whose ancestors have been around for some 60 million years).

Speculative biologists suggest that perhaps it was the aardwolf’s ancestor’s exceptional capacity to digest decaying food that imparted at least a partial tolerance to the otherwise toxic excretions of the termites. This in turn allowed these ancestors to slide into an ecological niche with significantly reduced levels of competition by changing their dietary approach. Unlike the previously evolved termite specialists, aardwolves lack the powerful claws and digging equipment necessary to break open termite mounts to unearth their prey. As a result, aardwolves have come to rely on termite species that forage in large numbers on the soil surface. They feed mainly on nasute harvester termites of the Trinervitermes genus, though the specific species differs according to specific regions. During the cold winter months, they may shift to the more heavily pigmented (and therefore, more diurnally active) Hodotermes species.

Whatever the origins of this unusual dietary preference, the fate of the aardwolf’s success was irrevocably linked to the presence of these specific termites. As a result, in areas such as Zambia, Central and West Africa where these termite species are uncommon or do not congregate on the surface of the soil, the aardwolf is conspicuous by its absolute absence.

The price of reduced competition

This reliance on specific dietary requirements may have allowed the aardwolf to survive the extinction that awaited all other dog-like hyenas, but every adaptation comes with its own cost. Unlike their bone-crushing cousins whose bite-force is renowned, the slim-jawed aardwolf lacks this characteristic entirely and their molars are greatly reduced in size. Their tongues and palates have broadened, and massive salivary glands secrete a constant stream of sticky saliva that coats the tongue, which in turn is covered with hardened papillae, allowing the aardwolf to lap up over 200,000 termites every night. There are patchy records of aardwolves consuming small mammals and birds, but these instances are rare and likely highly opportunistic as the peg-like molars would struggle to process harder food sources.

Given the available numbers of termites, this specialization might seem ideal, but researchers have also shown that seasonal abundance has a profound impact on an aardwolf’s physical condition and survival chances. Termites are temperature sensitive and may be entirely inactive during the cold winter months. Research shows that during this time, the aardwolf’s termite intake reduces to just a fifth of the normal amount and body mass losses of up to 20% have been recorded. These winter months have also been shown to be the period of highest mortality for cubs.

This has interesting ethical implications for guides and visitors looking to view one of Africa’s more unusual offerings. The best chance of seeing an aardwolf is during the winter months when, similar to aardvarks, their behaviour becomes more diurnal to conserve heat. However, great care should be taken to avoid frightening or chasing them during this period, as this unnecessary burst of energy will just add a metabolic drain to their already stressed bodies.

They occupy burrow systems, and both the males and females accept responsibility for caring for their young, with the male guarding the den while the lactating female is foraging. As is the case with most monogamous pairings in nature, monogamy does not always equate to fidelity. Typically, this takes the form of male promiscuity but in aardwolves, both the males and females have been observed mating with neighbouring or intruding individuals. In many cases, a more dominant male neighbour will begin regular incursions onto a rival’s territory prior to the onset of the female’s oestrus, sometimes adding their own scent marks inside the territory itself. The female, if allowed the opportunity, will readily mate with the more dominant intruding male. This overt cuckoldry is rare in the animal kingdom and may result in the male deserting the female, a behaviour that has been observed in aardwolves. However, research suggests that this desertion is rare and that the male will usually continue to raise the cubs as his own. Fights between rival males, while unusual, can be ferocious, accompanied by an extraordinary range of vocalizations including a roar-like sound.

The cubs themselves are born with their eyes open, like other hyena species, but remain inside the den for at least six weeks. The litters usually consist of around two to three cubs (though up to five have been recorded) and they begin to venture out on brief foraging excursions at around three months old. Though they reach independence at a young age (between four and six months old), they usually remain with their parents until their mother comes back into oestrus.

Despite the fact that their retiring natures mean that they are seldom seen, aardwolf numbers appear to be relatively stable, at least for now, earning them a conservation status of “Least Concern” on the IUCN Red List. In the past, their association with the hyena family caused significant levels of persecution at the hands of farmers under the mistaken impression that they were preying on their livestock. Fortunately, this misconception has been rectified for the most part through educational campaigns and aardwolf populations have been observed to be flourishing in some agriculture areas.

As a specialized forager, conservation organizations recognize that future environmental changes such as global warming may have a significant impact on aardwolves as has already been demonstrated in aardvarks. However, the extent of this impact is still unclear. 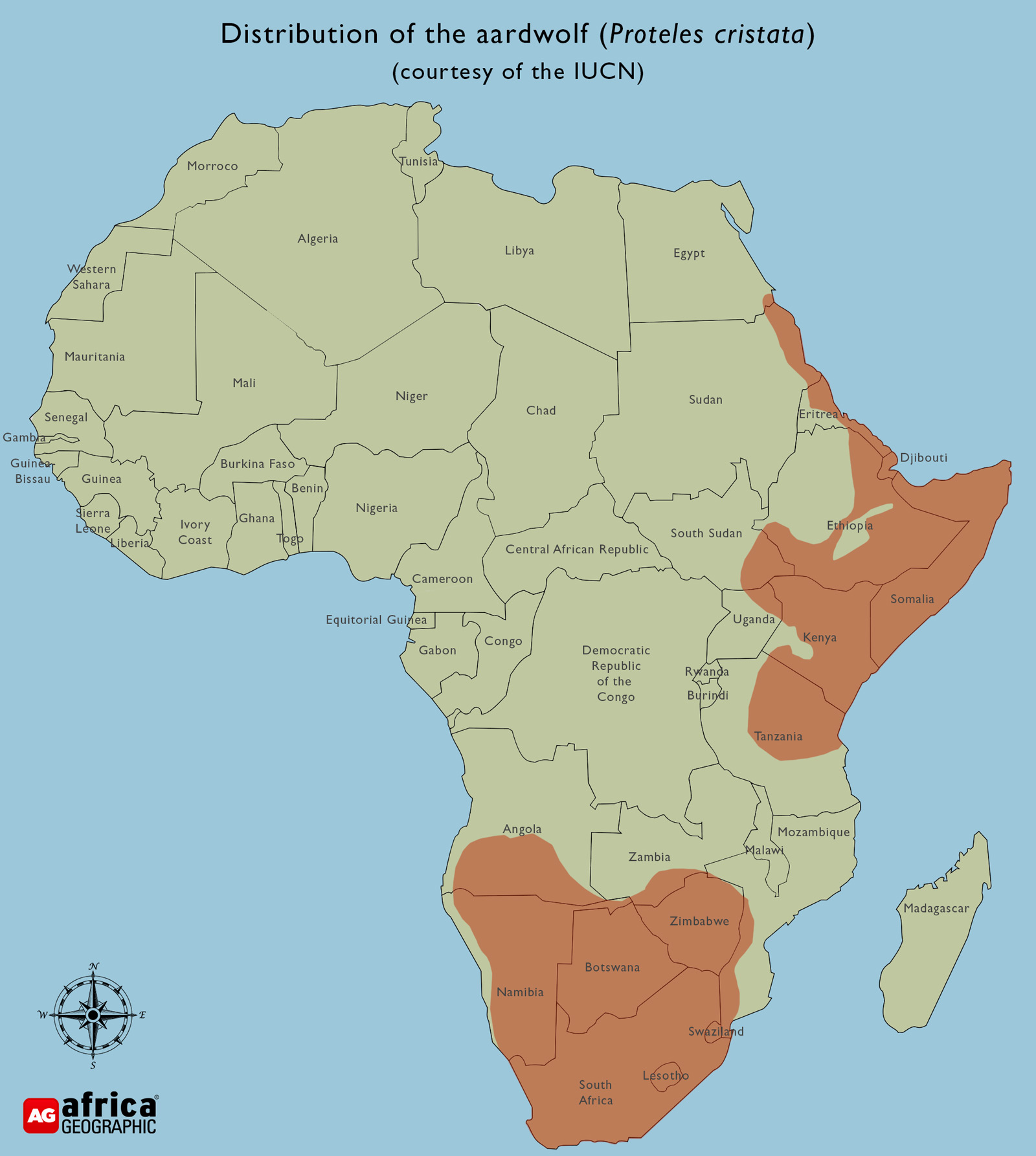 Expectations around safari experiences are changing and there is a growing realization that not everything revolves around spotting the ‘Big 5’, as wonderful and iconic as they may be. Many visitors to Africa are now equally enthralled by the prospect of viewing some of her more unusual offerings – from slinking servals to powerful-bodied aardvarks and endangered pangolins. Yet somehow the aardwolf seems to have remained cloaked in obscurity, despite their fascinating lives and intriguing evolutionary oddities. 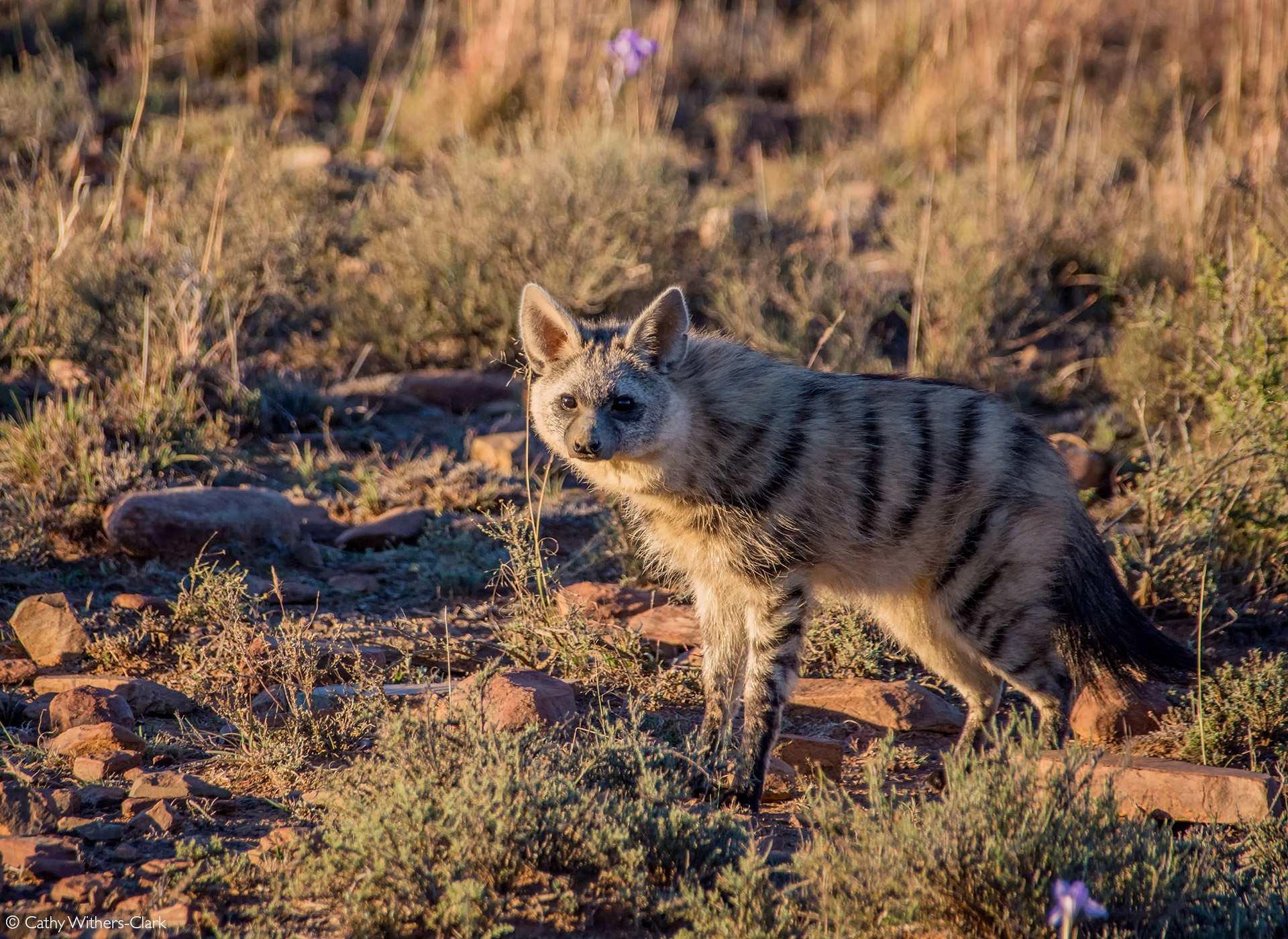