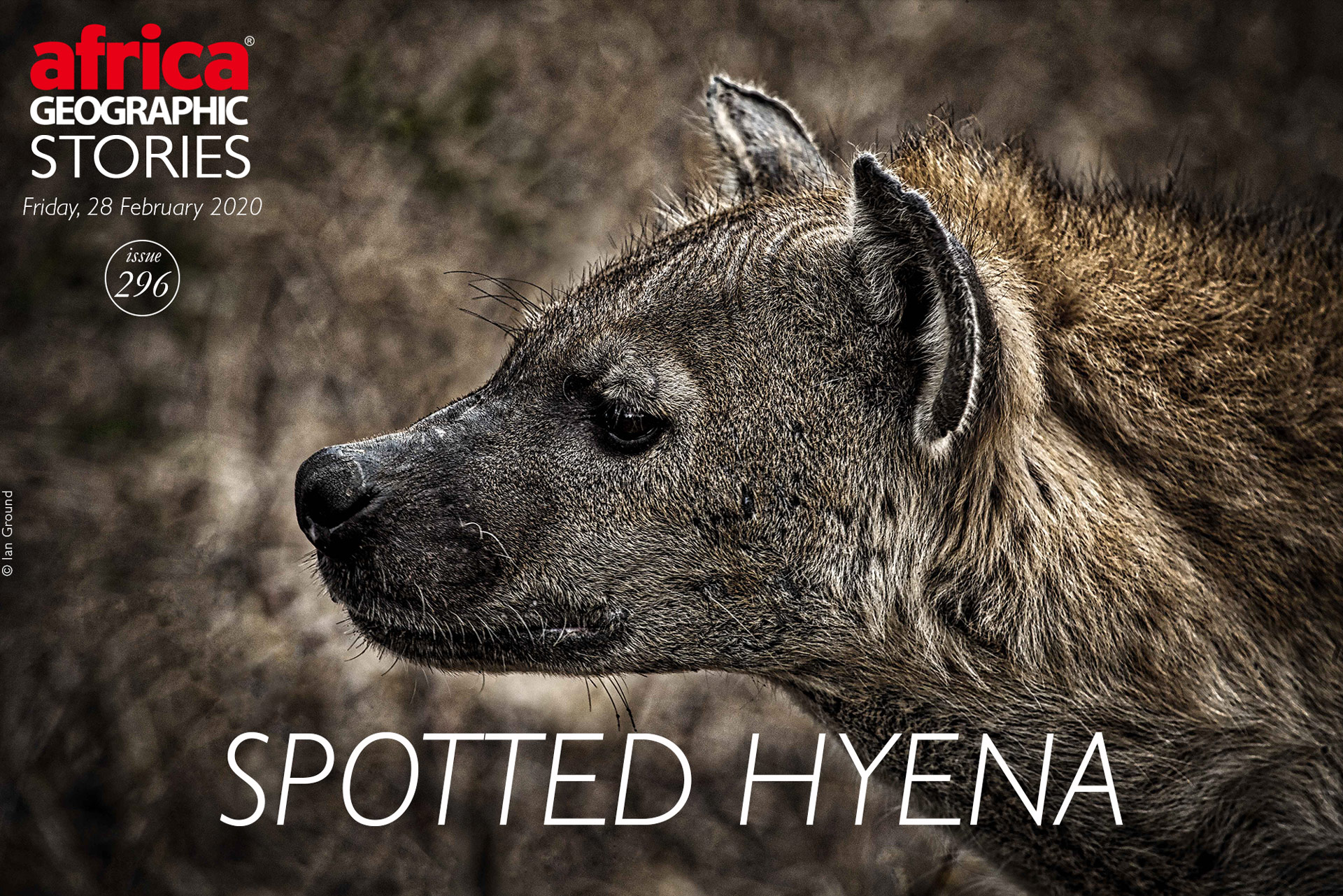 The spotted hyena (Crocuta crocuta) is one of the world’s most misunderstood animals. Public perception often tends towards scorn and even outright hate – they are reviled as cowardly, thieving, dirty, ugly, lazy…the list goes on. These impressions are embedded in human history and public consciousness then reinforced by mainstream media and films. Fortunately, though, more and more people are coming to appreciate hyenas for the fascinating creatures they are. Regardless, misconceptions about hyena abound. Spotted hyenas are extraordinarily complex: they defy most natural ‘rules’ and research that might apply to hyena in one part of Africa might not be born out in their behaviour elsewhere. They are so highly adaptable and varied that generalizations are inappropriate, especially given that certain aspects of their lives are still being researched and are are not fully understood.
Quick facts:
– Social structure: a clan of anywhere from under 20 to over 100 individuals
– Mass: between 50 – 85 kg (East African spotted hyenas tend to be smaller than those in southern Africa.)
– Shoulder height: between 70-90cm (as above)
– Gestation period: 110 days
– Litter size: 1 or 2 cubs (3 rarely)
– Average life expectancy: debated, probably area-dependent but around 12 years in the wild, 20 in captivity

There are four extant species of hyena: the spotted hyena (Crocuta crocuta), the brown hyena (Parahyaena brunnea), the striped hyena (Hyaena hyaena) and the aardwolf (Proteles cristatus). Despite their dog-like appearance, all members of the hyena family (Hyaenidae) are more closely related to the genet (Viverridae) and mongoose (Herpestidae) families, as part of the Feliformia (cat-like) sub-order of Carnivora. 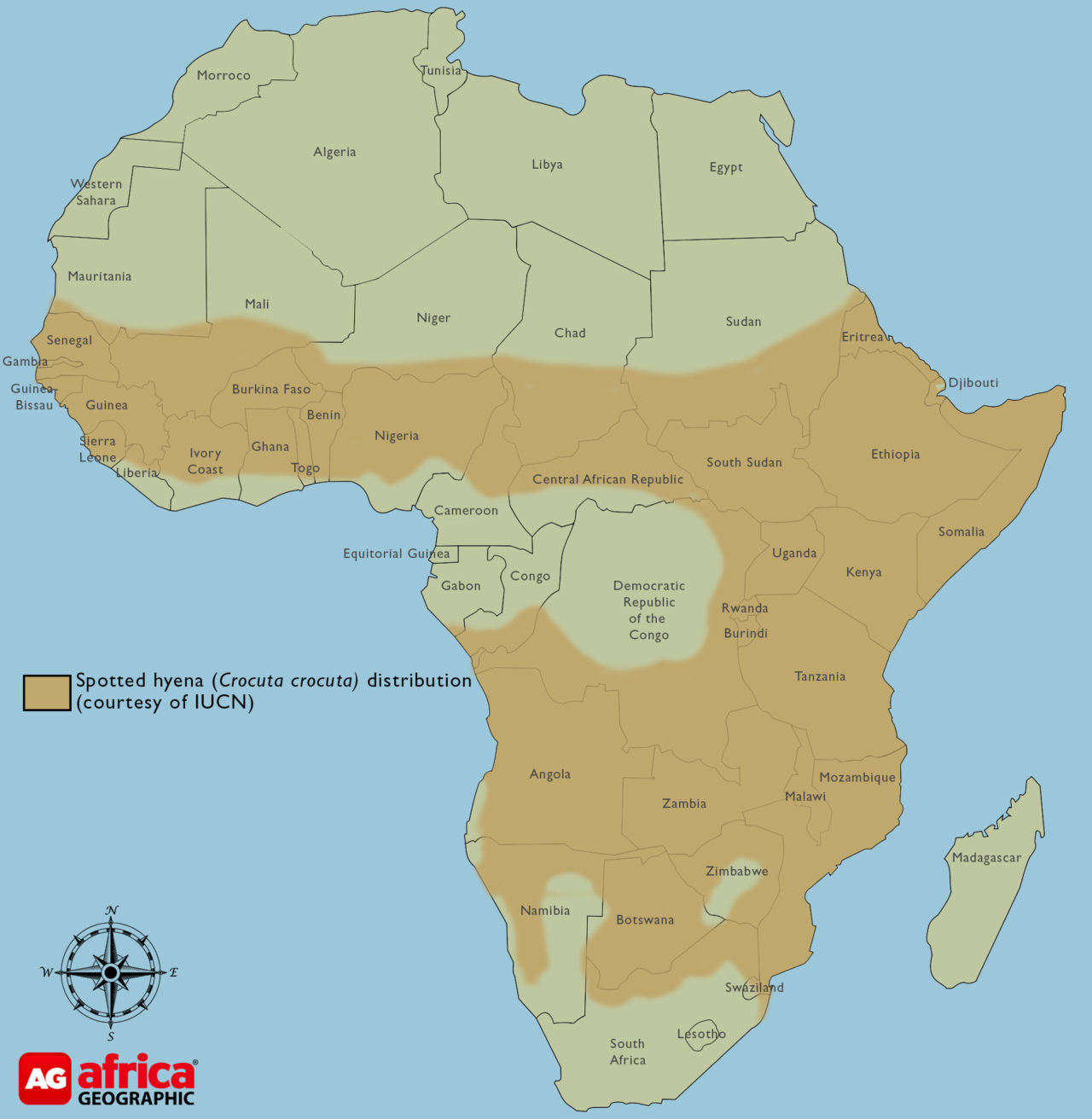 Spotted hyenas are the most abundant large predator in Africa, and though populations are fragmented, they are found in savannah and forest habitats throughout most of sub-Saharan Africa. They live in social units called clans of anything from a handful of individuals to over a hundred – consisting of several unrelated females and their offspring (matrilineal lines), as well as immigrant males from outside clans.

Despite their reputation as scavengers, they are able and efficient predators in their own right and in some parts of their range, they hunt over 90% of the food that they consume. Their large hearts relative to their body size allow spotted hyena the extra stamina necessary to exhaust their prey during a relentless chase. They adapt their strategy depending on the prey and use mud, rain, rocks or water to their advantage, either individually or in groups, which allows them to hunt and catch larger prey species. Spotted hyenas are also opportunists and will scavenge or steal from other predators. They are not alone in this – all predators steal from other predators if conditions suit them; lions often more so due to their sheer bulk.

The unusual genital structure of the spotted hyena is perhaps its most famous trait. Females have what is known as a pseudopenis – fused urinary and vaginal tracts and an extended clitoris. The outer labia are also enlarged, taking on the appearance of testicles. There are several theories as to the reasons behind this curious evolution, but no conclusive agreement.
The pseudopenis has to be retracted to mate – a process that can make the courtship lengthy and the act itself an exercise in dexterity, particularly for the male, whose aim has to be impeccable. Due to the anatomical restrictions, the male is forced to undergo an elaborate courtship to win the affections of the female. These courtships can be highly entertaining to observe as the male bows and scrapes the ground, tucking one front foot under the other – the picture of servile submission. This becomes even more amusing when the female disdainfully walks away, or worse, ignores him completely. The males have to be forward-thinking and often ingratiate themselves with females by playing with their cubs in the hope that their efforts might be remembered when it comes time to mate, months or years later.

If the mating process is tricky, the birthing process is difficult and often dangerous. The narrowed opening of the clitoris has to split to make space for the 1.5 kg cub(s), and it is common for at least one, if not both cubs, to die during a female’s first labour. The cubs are born with their eyes open and their milk teeth erupted and immediately engage in a savage battle for those critical early days as siblings look to establish which is dominant. The widespread belief that siblicide in hyena cubs is common is inaccurate – it is rare and generally only occurs when access to milk is restricted.

The first few weeks in a cub’s life are critical – they must learn from their mothers where their position lies in a complex hierarchy. Within a clan, whether it is large or small, each hyena occupies a level in the clan hierarchy. At the head of the clan sits the matriarch. Not all males in the clan are the lowest-ranked individuals because each cub inherits his or her mother’s status in the clan, slotting in directly beneath her position and above their older siblings. If a high-ranked female has a young son, he is automatically a high-ranked member of the clan unless and until he chooses to disperse. Not all males disperse from their natal clans, but if they do approach a different clan, they will enter at the bottom of the hierarchy. The females generally stay with the clan throughout their lives.
Naturally, higher-ranked positions within the clan are coveted because they mean better access to food and resources for both the females and their offspring. While hierarchies are strictly enforced regularly, lower-ranked individuals can rise up against those above them in something very close to what we would understand as a coup.

Behavioural ecologists who have studied spotted hyena believe that they rank among some of the most intelligent animal species on earth and that there is strong evidence of convergent evolution with primate intelligence – they learn quickly and are natural problem solvers, outperforming chimpanzees in certain aspects of cognitive tests. Like primates, each hyena recognizes every other clan member, and they show kin nepotism, even in situations where kin are generationally removed. Their notorious (and often feared) laugh-like vocalization is just one of the many sophisticated ways in which spotted hyena communicate. Studies of spotted hyena behaviour aim to reveal not only their secrets but to reflect some of our own as well, as they are the only apex predator on this planet with anything close to the complexities of our own social history.
So strong is the bias against hyena that even Jane Goodall, upon her arrival in Tanzania, did not expect to have any affection for them. However, like all those who spend time in the company of these peculiar mammals, they won her over. “Hyenas are second only to chimpanzees in fascination,” she wrote, “they are born clowns, highly individualistic.” In a rush to view the more beloved wildlife, tourists so often overlook Africa’s smartest predator.
The information included here was mainly sourced from the two long-standing hyena research programs: the Michigan State University’s Mara Hyena Project, and the Leibniz Institute for Zoo and Wildlife Research’s Ngorongoro Crater Hyena Project. Anything further comes from the IUCN Red List and personal observations of the writer – Africa Geographic scientific editor Jamie Paterson.