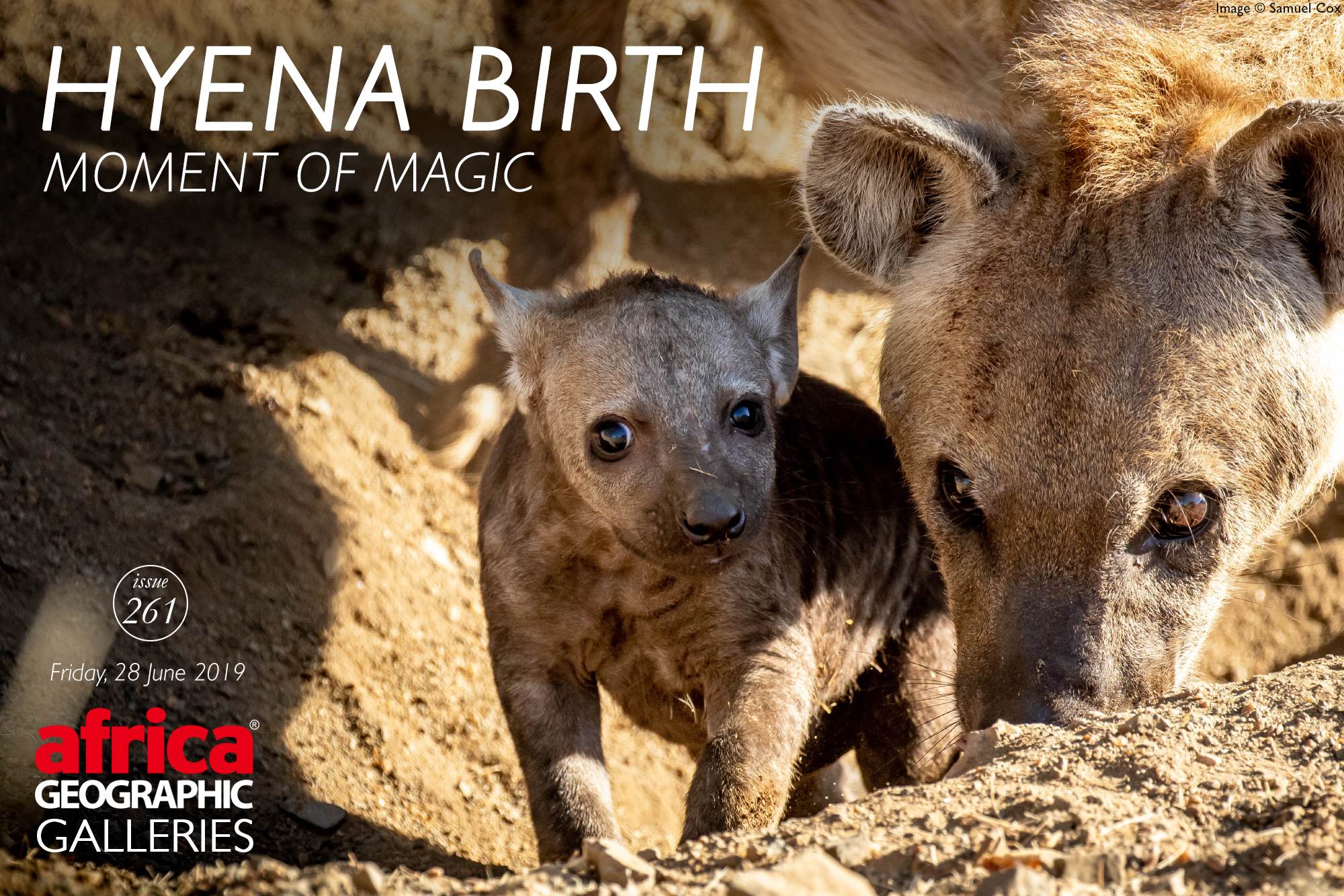 Capturing the incredible moment of a hyena giving birth

There have been many viewpoints written about the spotted hyena (Crocuta crocuta), from both sides of the story. They have been painted with broad brushstrokes as the evil, thieving scavengers of the African bush on the one hand and the other, highly intelligent, cohesive and beautiful animals. Yet, in a world of pure survival, where the weak falls and the strong flourish, there are none better suited than that of the hyena.

They’re animals with such unique traits, and it would be easy to wax lyrical about all they are capable of due to their morphological characteristics, unified social structure and charismatic behaviours. Yet, they often get pushed aside in favour of nearly every other predator despite being iconic of African wildlife.

As humans, we like to categorise things, put them into boxes. So, when the spotted hyena was inducted into the hall of fame as one of the ‘Ugly 5’, this may have been a time to pause and question whether or not this has been beneficial to the hyena, or detrimental?

Not everybody who visits Africa would think to question this statement, and so the legend pervades far and wide. As conservationists, we understand more than we ever have, yet how do we get this information out to the general masses and change those perceptions? Often we are told that science and emotion do not belong together, surely this has to be wrong? If we have no connection to what we are trying to conserve how do we maintain interest, not only for ourselves but to share it with others?

If we have that emotional connection, moments such as we were fortunate to witness recently in the Kruger National Park will speak louder and further for the animals that don’t always have a positive voice.

Working in Africa together for the volunteering and conservation organisation, African Impact, we’ve spent years teaching and guiding students the finer and wondrous details of wildlife and photography. However, there is nothing like “switching off”, and for us, this often means packing the car and heading into the Kruger National Park for a few days. No pressure, just endless roads full of the unexpected, yet with no expectations from our side.

Everything was going grand with sightings of lions, leopards and elephants, but one of the recurring highlights was the sheer abundance of hyena cubs.
Now, we’ve had our fair share of exceptional hyena sightings over the years, but we were beside ourselves when we located multiple den sites, each with a litter of cubs no more than four months old.

These youngsters were highly inquisitive and often found playing outside, napping and sniffing the cars that pulled up alongside. They’re fascinating creatures to photograph and even just to watch from a behavioural standpoint as they’re equally brave as they are cute.
However, these sightings would pale in comparison to what awaited us on our last morning…

We were casually heading towards a rest camp when we came across the familiar sight of cars parked up alongside something just off the road. We guessed it would be another hyena and we weren’t wrong as we slowed down to see a huge female sitting next to a small den. A couple of tiny heads poked out with a curious glance and we sat there in amazement. We couldn’t believe our luck as we were losing count of how many cubs we had seen in such a short time frame!

The female appeared agitated and uncomfortable, continually changing positions – what we didn’t initially realise was that she was having contractions and had started to give birth! There was no time to comprehend the situation as it happened so fast, so we sat, photographed and watched the whole ordeal in a near state of shock. After just a few minutes of our arrival, she proceeded to push out her newborn on the sandy roadside about two metres from us.

Animals usually try to give birth in privacy, often hiding away in thickets or burrows; people never see these kinds of events, let alone photograph them. An unusual feature of the hyena is that the females have a pseudo-penis. It is used for copulation, urination and, shockingly, giving birth – meaning it has to stretch out to allow the foetus to pass through.

This wasn’t a pleasant or magical affair, instead, it was quite stressful and grim to watch. The baby fell to the ground, and within moments mum was lapping up the placenta and then chewing through the umbilical cord while a tiny, rather pathetic, gory bundle of matted black fur and dirt lay on the sand.

Its tiny paws flailed in the air as mum attempted to clean it, before hiding it away in the den out of sight. She then flopped down near the den entrance, proud and exhausted, now and then dipping her head inside and cleaning her newborn.

The juveniles joyfully pranced all over the place – often clambering over the newborn baby and mother.

It was over within ten minutes, and anyone who wasn’t there for that brief period had no idea what had just occurred. It was interesting to see other cars slow down, but then drive away when they saw a single hyena. Had they shown more interest, they would have been treated to such an unusual sighting.
We eventually left the sighting, wanting to give the newly extended family a bit more privacy, and were brimming with happiness and excitement over what we had just witnessed. We never go into Kruger hoping for epic sightings, but one had just fallen into our laps, and in one of the most unexpected ways we could never have imagined.

This sighting reinforces and redefines our love and dedication to commit our lives to work with such fascinating species. Hyenas may be under-appreciated, but they’ve never failed to deliver exceptional experiences and photographic opportunities, and we’ll never stop appreciating them and singing their praises to anybody who will listen. 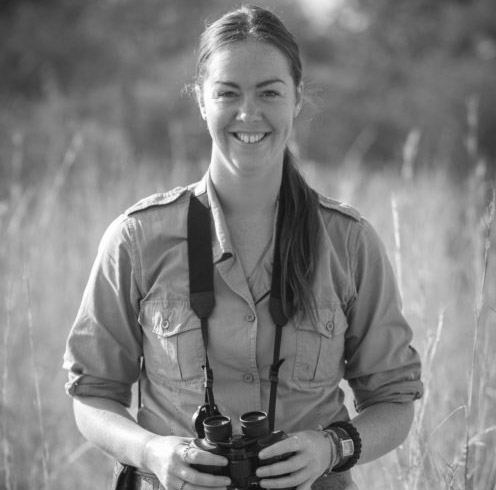 Katie Adams
Katie Adams gained a BSc (Hons) in Wildlife Conservation and Ecology in the UK before obtaining her FGASA qualifications in the Lowveld. Having travelled to southern Africa extensively, she has dedicated her life to the study and conservation of wildlife. Working with a wide variety of people from scientists, artists, volunteers and photographers she is committed to bridging the gaps between these different ways of thinking, believing in the power of education, passion, emotional connection and the sharing of knowledge. 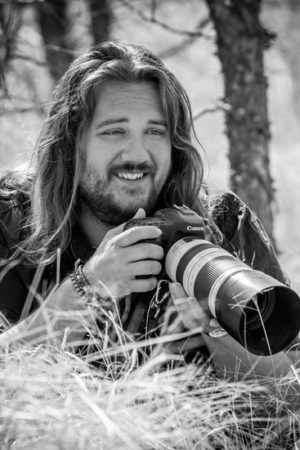 Samuel Cox
Having been travelling to Africa since 1999, Sam’s passion for wildlife quickly drew him to focus on photographing the diverse wildlife the continent has to offer. He’s now based in the Greater Kruger of South Africa, working as Photography Manager for African Impact where he’s working with international photographers and introducing to them the beauty that had him fall in love with the country twenty years ago.
His overall aim is to teach photographers the importance and impact their images can have in aiding and assisting important conservation initiatives worldwide. His photographs and writing have been published online with Africa Geographic, National Geographic, Wild Card Magazine and Tracks 4 Africa, with printed publications in BBC Wildlife magazine, Travel Africa magazine and the Klaserie Chronicle.