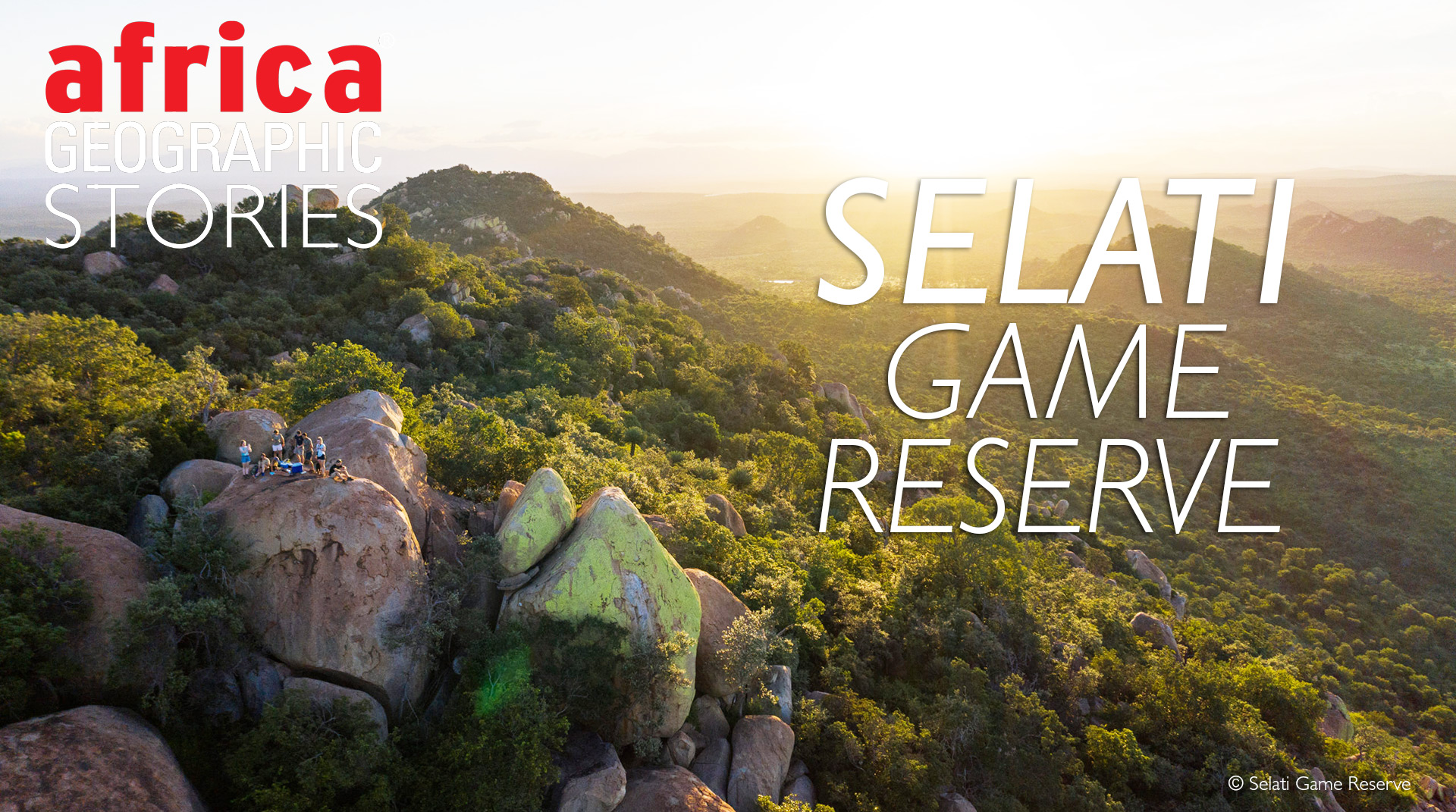 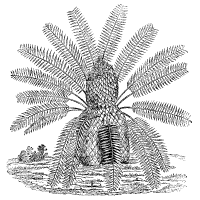 It’s a humid afternoon in the Lowveld of South Africa, and I’m straining my ears, willing the sound of a vehicle to emerge. Along with a dozen nature enthusiasts, I’m waiting for the conservation team to load up a darted cheetah due for a tracking-collar change. Not too far from where we’re standing, in the centre of Selati Game Reserve, we will soon have the opportunity to witness a vet and team of ecologists monitor the cheetah as they undertake the collaring process. As far as wildlife experiences go, this one-on-one encounter with a big cat tops the list.

But the conservation experiences offered to guests of Selati Game Reserve are not the only attraction putting this reserve on the map. With 360-degree vistas dotted with granite koppies, the opportunity to experience the Big Five and special species such as sable antelope and black rhino, and unique access to a population of Lillie cycads (which grow nowhere else on the planet), this reserve has much to offer. 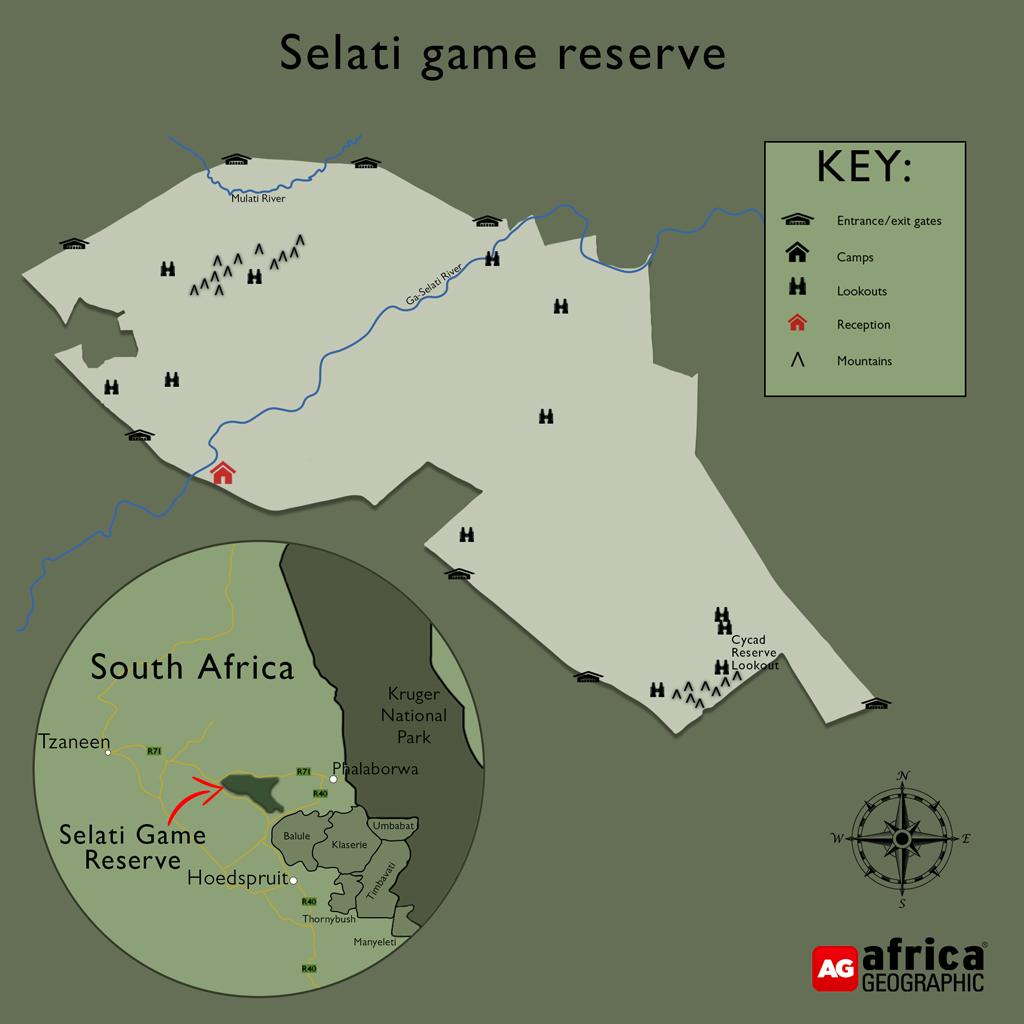 Selati Game Reserve may be the South African Lowveld’s best-kept secret. While visitors seeking Big Five safaris to the Limpopo province are inclined towards choosing the Kruger National Park and Greater Kruger reserves as destinations, adventure enthusiasts in search of seclusion and rarities off the beaten track will find great contentment spending a few days in this reserve.
Selati operates with a low-development philosophy, and limited vehicles are allowed in the reserve. The resulting wilds offer an unparalleled experience of raw wilderness and rewarding solitude in the heart of the bushveld.

A river runs through it

Selati Game Reserve garners its name from the perennial Ga-Selati River (or Selati River), which springs from the Wolkberg Mountains, heading east to cut through the reserve before meeting the Olifants River near Phalaborwa. Balule Nature Reserve, part of Greater Kruger, lies just 6km southeast of the reserve. The area is characterised by immense granite outcrops offering incredible views from all corners of the reserve, and pockets of chartreuse indigenous vegetation.

The reserve was officially proclaimed in 1993 when several landowners in zones formerly dedicated to cattle farming recognised the value of preserving the area’s natural heritage. The reserve managers quickly set about repopulating the reserve with species endemic to the area, reintroducing white rhino and other species acquired from surrounding farms and the Kruger National Park. A focus on sable breeding for the years following the establishment of the reserve allowed for a robust income, facilitating the restoration of a true wilderness area. As the years went by, a few more neighbouring farms were incorporated, and the reserve grew to include the Lillie mountain range and 26km of the Ga-Selati River. Over the years, elephants were reintroduced to the area, as were a pride of lions (where before free-ranging lions had often frequented the reserve), black rhino (and accompanying sophisticated anti-poaching operations) and disease-free buffalo. An elephant immunocontraception program is implemented on the reserve to limit the population growth of these animals.

While Selati is a Big Five destination, other fascinating wildlife also populates the reserve. Over 50 mammal species are present. What at times appears to be impenetrable bushveld gives way to pleasant paths unveiling elephants and giraffes at every corner. Cheetah, black and white rhino, spotted hyena, hippo, Nile crocodile and a large population of free-roaming sable antelope can be found in the reserve. Eland roam the expansive bushveld as leopard prowl the plains. Delightful rare species include Sharpe’s grysbok, mountain reedbuck, brown hyena, pangolin and Cape clawless otter.

An established pack of nine wild dogs (painted wolves) were also recently introduced. Over the years, introductions and management of animal populations have been conservative to complement efforts to restore the veld along the perennially dry Ga-Selati River. Similarly, artificial water points are strategically placed to prevent overexploitation of the veld and enhance wildlife viewing opportunities.

Over 315 bird species have been identified here, including Arnot’s chat, thick-billed cuckoo and Verreaux’s eagle (you can find a nesting pair in the rocky outcrops). There is also an established vulture restaurant which feeds vultures regularly, contributing to their conservation.

Lay of the land

Climbing the steep rocky path to one of the highest boulders atop the Lillie Mountains, I hear a paradise flycatcher flittering overhead, breaking an otherwise eery silence. After about 10 minutes of vigorous climbing, as the canopies grow dense, the boulders grow tall, and I start to lose my breath, we reach a temporary summit. “Here it is!” declares our guide Jenni. There before me, in an unassuming cove of boulders and shrubbery, is a 3.5m tall Lillie cycad (Encephalartos dyerianos). Within a few more metres, the cycads are jutting out of rocky crevices and groves of undergrowth at every corner. Here in the south of the reserve, the Lillie mountain range provides ideal habitat for the rare cycads.

Plant lovers will delight in the intimate encounters of the critically endangered woody plant, found nowhere else on earth but on this lone granite hill at 700m above sea level. Thankfully, the population here is guarded by anti-poaching teams which prevent the theft of these precious specimens. The cycads line the deep groves amidst the boulders en route to a steep hill offering views from horizon to horizon. Scattered across this hill are dozens upon dozens of these beauties, some only ankle high, others with stems stretching 4m into the sky. Selati may be a haven for seekers of diverse wildlife, but for dendrophiles, this reserve is the Rosetta Stone.

The climate in this area is dry, with a mean rainfall of 530mm and average annual temperatures exceeding 18°C. The reserve’s rich and diverse geological substructures include the Murchison Greenstone belt in the northwest of the reserve and are some of the oldest rock formations on the planet. Three more granite and pegmatite formations are present, including the Willie, Lekkersmaak, and Mashishimale gneisses.

Selati plays home to six different plant communities; the most fascinating of these is the vast range of woody plant populations (including Lillie’s cycad). Mixed Combretum veld dominates the tops of mountains and hills, while Terminalia sericea trees flourish on the poor soils associated with the natural seepage lines. Mopane woodland dots the soils along the drainages and lower lying areas, while bushwillow and Vachellia species engulf the wide-open spaces.

A sundowner is the highlight of any safari, and Selati offers a platter of sumptuous sunset-viewing spots. Joubert’s lookout provides a 180-degree view over Galon Ridge. Junior’s Platform makes for an epic viewpoint to watch the sunrise, and groups can book the Outlook for elegant sundowners atop a hill. Trips to the Lillie Mountains in the afternoon allow views from one of the reserve’s best viewpoints. Thrill seekers can scramble over steep boulders and jump stomach-churning gaps, while the more mild-hearted can gently meander over flatter rocks while examining wooded trails and the cycads dotted through these surroundings. But a mild clamber up to the highest point is well worth the adrenalin rush, as the view from here, 730m above sea level, is breathtaking.

There was a time in the Lowveld when our predecessors unwillingly met wildlife face to face, mostly choosing to avoid these encounters at all costs. But thrill-seekers craving a primitive taste of the ancient continent need only let the mind wander slightly to envision walking in the ancient footsteps of explorers. Walking excursions in Selati provide an uninterrupted experience of the surroundings, allowing walkers to rekindle the roots of the past by traversing a wilderness trail in the reserve and exploring myriad paths through tall grasses and clumped Vachallia species. Experienced guides lead hikers through the untouched bushveld, carefully allowing visitors intimate experiences with wildlife. Guests can choose between sleeping out under the stars or spending the night at one of Selati’s lodges.

Customised mountain-biking trails are also available, stopping over at either one of Selati’s lodges or safari camps over three days. With various projects linked to the World Wildlife Fund and the Endangered Wildlife Trust taking place here, such as the Black Rhino Range Expansion Project and Cheetah Metapopulation Project, guests are also offered the opportunity to take part in conservation experiences. Whether being present to witness the collaring of a cheetah, the feeding of predators in the boma awaiting release into the reserve, or even the dehorning or notching of rhinos, these activities will present a once-in-a-lifetime experience for many visitors. Witnessing a cheetah collaring up close is probably one of the most thrilling experiences of my lifetime. The collaring was a success and the data stemming from the monitoring of this cheetah is invaluable to the Cheetah Metapopulation Project.

While private landowners make up the majority of the reserve, there are three properties open to tourists, which feature comfortable lodges. Dunn’s Camp, neighbouring the sublime Ga-Selati River; Klipspringer, a whimsical retreat for families overlooking a waterhole; and luxurious Lillie Lodge, perched atop a granite outcrop in the south of the reserve, all offer intimate experiences of the surrounds.

As a low-development reserve, limited vehicles are permitted to use the roads and self-driving is not allowed (aside from travelling to your lodge destination). Tourists visiting lodges in the area have access to the road networks throughout the reserve via guided game drives on open game vehicles. The unobtrusive road network traverses wide corners of the vast reserve and consists of dirt roads – many of which require 4×4 vehicles.

For those seeking a unique bushveld experience, combined with spotting the Big Five, close encounters with wildlife, rare endemics, intimate accommodation and rugged wilderness in a quiet reserve on the road less travelled, Selati is the answer.