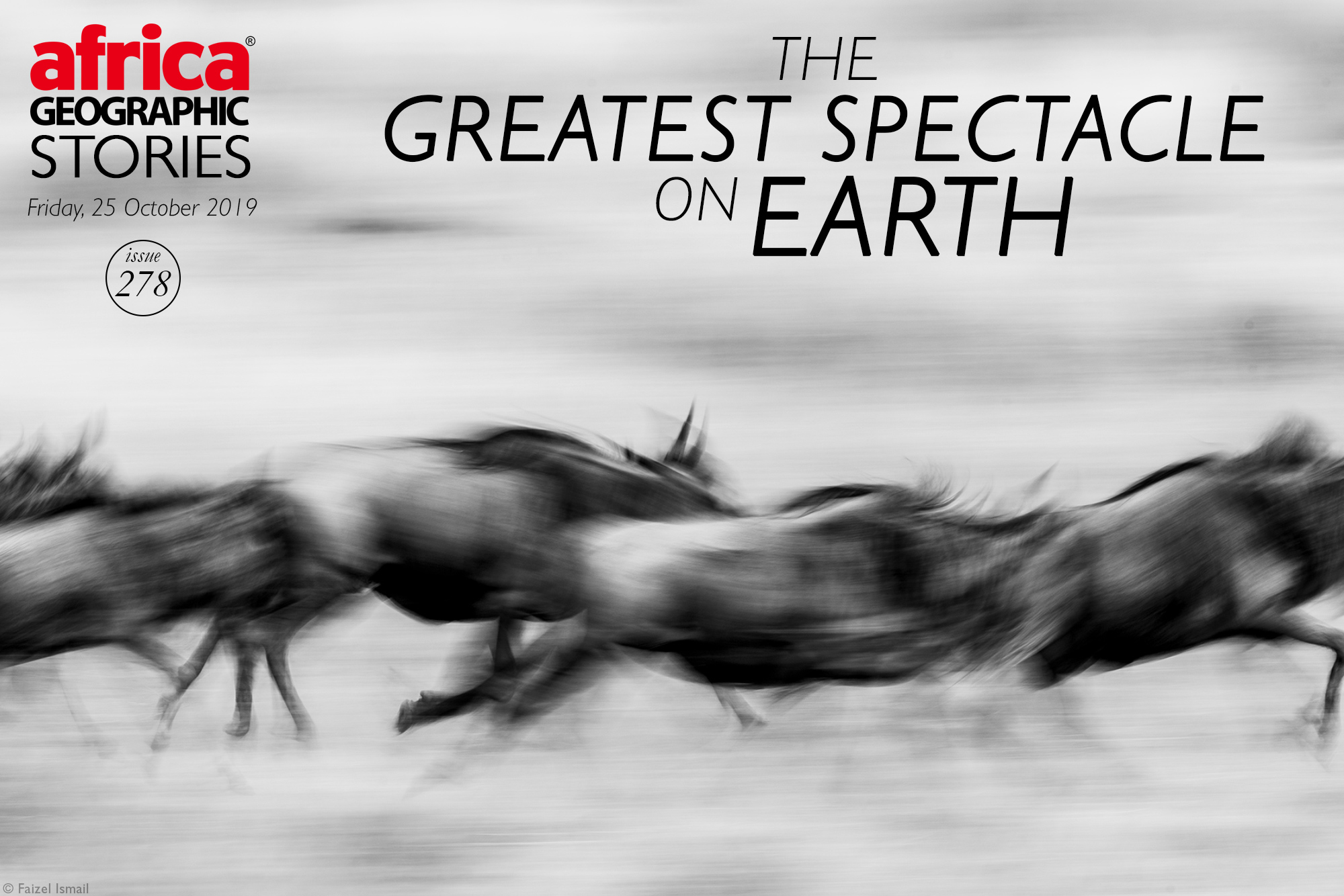 The Mara River...
The ultimate
leap of faith

The energy in the air is feverish, filled with anticipation and burgeoning adrenaline. The chorus of thousands of voices echos through the dust as the herds make their way towards the banks of this legendary river, signalling what’s to come. If the conditions are favourable, what follows will be the breathtaking pinnacle of nature’s greatest spectacle, the greatest hurdle in the Great Migration: The crossing of the Mara River.

The Great Migration is not a singular event with a particular start and end, but rather the constant movement by millions of wildebeest and tens of thousands of other plains herbivores, driven by the quest for nutritious grass, which is in turn dictated by the rains. As the wildebeest follow the age-old instinct rooted deep within each of them, they travel hundreds of miles, following the rains, in a route that takes them from Tanzania’s Serengeti to Kenya’s Maasai Mara. Even though the migration itself is in constant movement, without a start or end, it is the river crossings that define this incredible spectacle.
These crossings vary as much in intensity and danger as they do in their spectacular nature. There are shallow crossings with little fuss, and then there are the deepwater crossings – crocodile-infested crossing points which result in dust-choked panicked chaos.

The great herds that traverse the many miles in search of more fertile grazing lands often break into “smaller” satellite herds, comprising tens of thousands of animals. These herds navigate their way by following their internal compass, which is driven by a swarm-like mentality rather than following a designated leader to the various crossing points in this continuous movement of life.

It is now August, and with each passing day, more herds emerge from beyond the horizon. They move in unison, in a kind of symphony that can only be likened to a large flock of starlings that mould to the air currents they ride. They have left the plains of the Serengeti and made their way to the Maasai Mara. It is here that they will be faced with the ultimate leap of faith – crossing the Mara River. The energy at the crossings is erratic, nervous, hesitant and often chaotic. The herds have made it to this point after an arduous journey, and they are now faced with this perilous hurdle, a crocodile-infested river that they do not want to venture into, but instinct tells them they must.

Left: Wildebeest disappear in plumes of dust as they descend the steep riverbank; Right: After surviving the river crossing the wildebeest are visibly more relaxed once on dry land. Both images © Faizel Ismail

Even though the instinct to cross is innate in each one of them, on arrival at the river they mill around, with several false starts – the internal struggle is apparent. Ultimately one wildebeest, in a moment of sheer courage or madness, will take the plunge. And following that pioneer, there is an explosion of the pent-up energy as the once nervous herd now rapidly morphs into a frantic mass of individuals all desperate to cross.
Once the crossing begins, very few things will bring it to a stop. Even as the large crocodiles who were lying in wait approach the crossing masses, more and more wildebeest continue to file down the steep, dusty banks into the water below. Depending on the size of the herd, a crossing can last from a few minutes to a few hours.

For some, witnessing the Great Migration and the river crossings is a bucket-list experience to be ticked off before moving on to the next item. But for me, it felt so much more than that. As a wildlife photographer fascinated by nature since childhood, finding myself on the banks of the Mara River and the cusp of nature’s greatest spectacle, was fulfilling my ultimate dream.

I was at one particular section of the Mara River when a crossing occurred. It came without any warning or inclination of impending mayhem. First one wildebeest stepped into the water, then two, three… and then, pandemonium! The scene unfolding before me left me spellbound. This was by far the most spectacular event I had ever witnessed; a moment greater than I had ever dreamed it to be. This was life playing out the way nature intended: unbridled, visceral, unconquerable and triumphant. 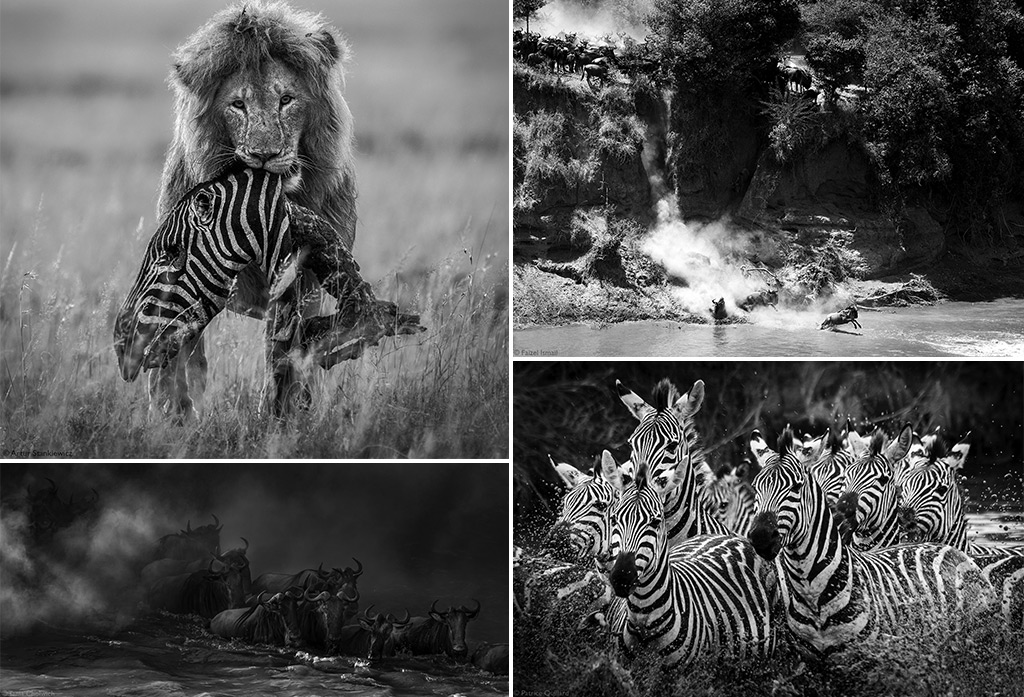 Clockwise from top left: 1) A lion holds the head of a zebra © Artur Stankiewicz; 2) Wildebeest take a mighty leap from the top of the riverbank to get down to the river © Faizel Ismail; 3) Alert zebra make haste while crossing the river © Patrice Quillard; 4) Wildebeest cross the river while keeping an eye out for predators © Tania Cholwich
It was a sight to behold, a joy to witness, and a life-changing moment. There are so many things in this world that are described as legendary, and yet the reality often falls short. The Great Migration is certainly not one of these, and the reality of witnessing a river crossing during the Great Migration exceeds mere words and folklore.

I have always talked about the magic of Africa and made mention that there must be something magical about the dust that covers this incredible continent. Little did I know that the dust kicked up by the march of a million wildebeest takes my passion and awe to the next level.
The Great Migration, simply the greatest spectacle. 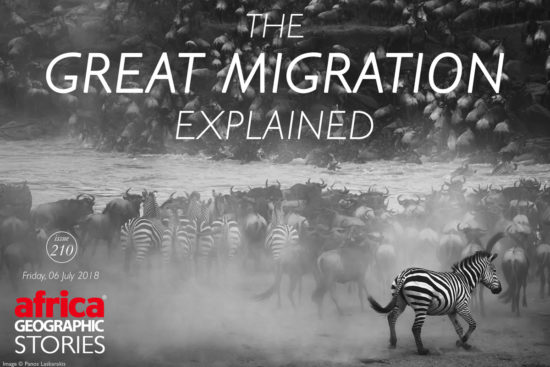 The Serengeti and Maasai Mara ecosystems see huge herds of wildebeest and zebras migrating in a continuous search for the best food and water. Although this journey follows a similar annual route, exact timing varies based on rainfall. When the rains beckon, the wildebeest go. In spite of the big cats in waiting, or the rivers thick with crocodiles, they diligently follow their inner compass in a never-ending circular journey. For a detailed, month-by-month description of the Great Migration, read our story The Great Migration Explained.

ABOUT THE AUTHOR, FAIZEL ISMAIL 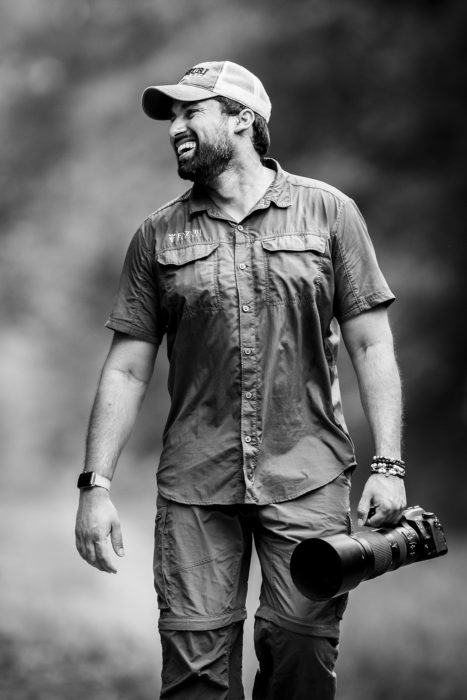 Faizel is a modern-day explorer, wildlife photographer and conservationist. He was born and raised in the town of Rustenburg, in the heart of beautiful South Africa, but his travels have taken him far and wide, and he currently resides in the United States.
Faizel has always had a connection to the natural world, through photography, conservation activities and by simply spending time in wild spaces. The natural world is intricately essential to who he is, and his passion has never waned. In many regards, he is still that little South African boy who explored the dusty bushveld with limitless energy and a zest for adventure, except that now he can share this love with the world through his photography, blog and the private safari company that he runs with his wife, Jessica.
“I want my images to ignite the part of the soul that spurs adventure, and to be a catalyst to reconnect people with our planet. This connection will create a sense of stewardship for our planet at a time when this is most needed.” You can see more of his photographs on his website and Instagram page.