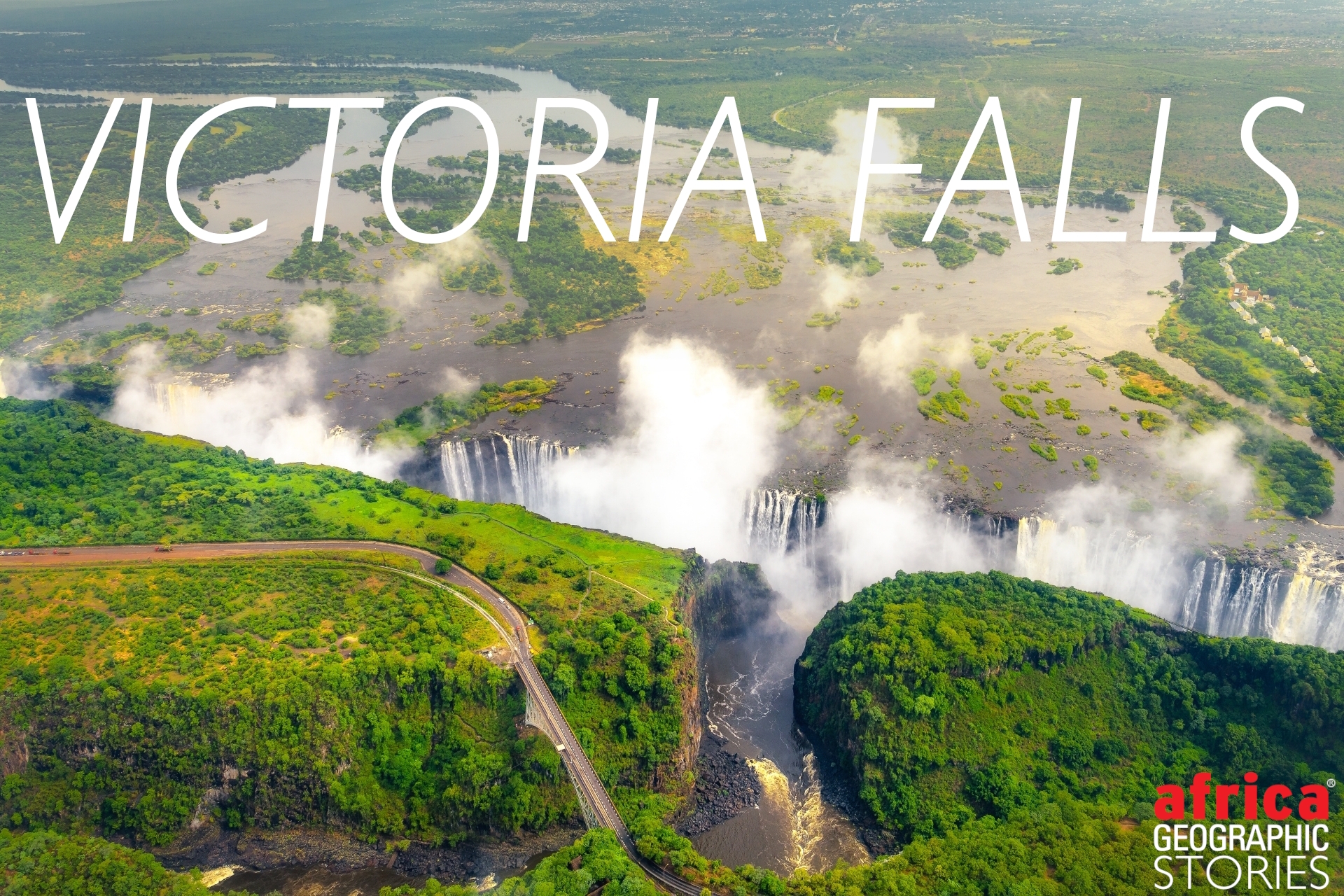 The smoke that thunders

The rivers of Africa are her lifeblood. Streams trickle down the mountains and gradually unite to form some of the most spectacular and biodiverse waterways carving gorges across the continent. Nothing, not even geography, can hold them back as they tumble off cliffs and through dramatic ravines. As the largest waterfall in the world, Victoria Falls needs little introduction.

Even to the uninitiated, the name conjures images of breath-taking vistas, verdant vegetation, thrill-seeking and, of course, water thundering down into gorges releasing spray that can often be seen kilometres away. The falls are also officially known as Mosi-oa-Tunya or “The Smoke That Thunders” in the Lozi language of the area – a name that perfectly captures the almost mystical atmosphere of this World Heritage Site. Victoria Falls is a place of myth, magic, and romance. 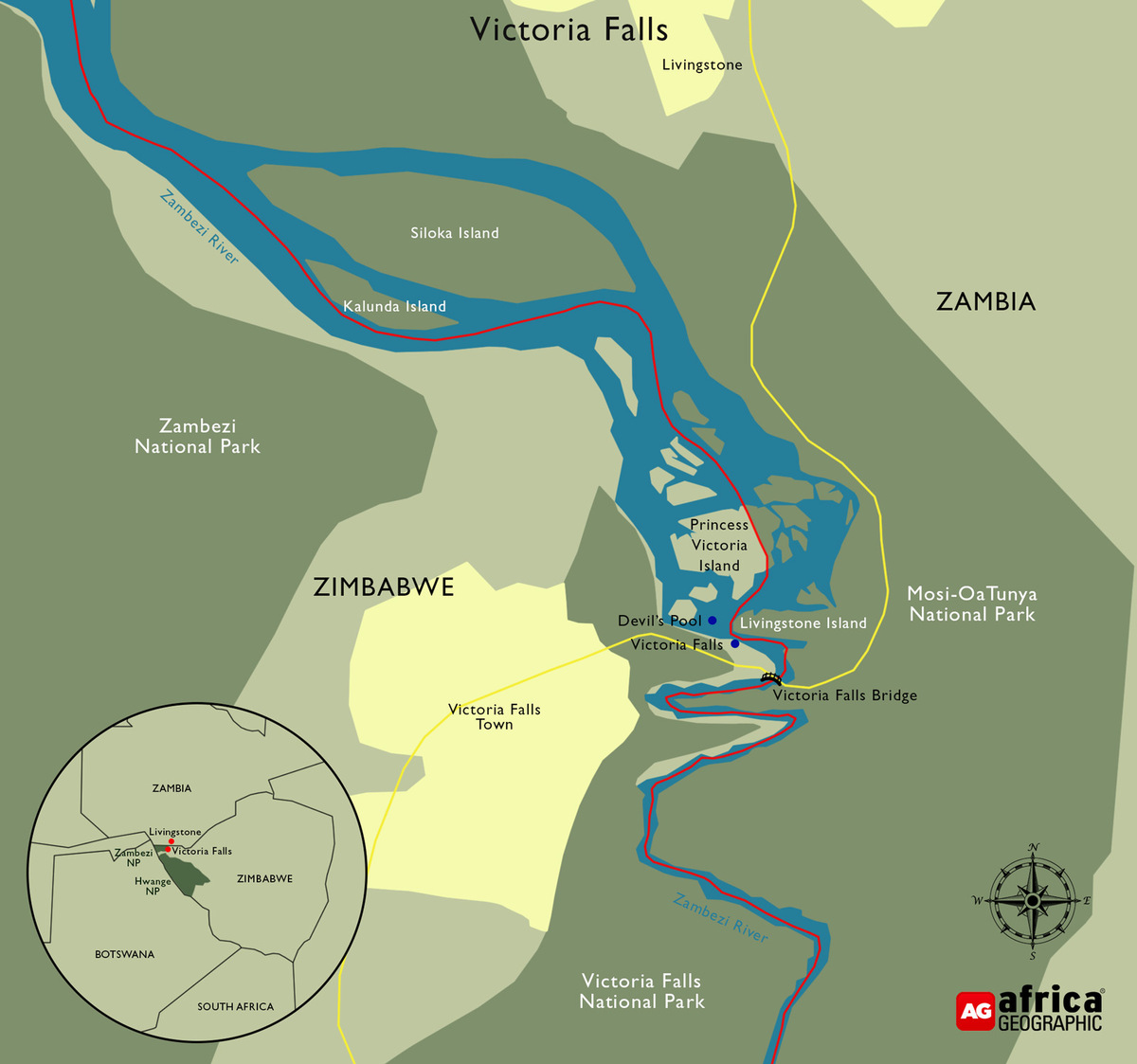 Victoria Falls and the Zambezi River

The world-famous Victoria Falls mark the border between Zambia and Zimbabwe, where the mighty Zambezi River gathers its strength and tumbles off a fractured basalt plateau into a series of dramatic gorges 100 metres below. Though not the tallest waterfall (on land, this title is held by Angel Falls in Venezuela), at an impressive width of 1,708 meters, the Victoria Falls creates the single largest continuous falling curtain of water in the world. At the height of the rainy season, five hundred million cubic meters of water hurtle over the edge every minute, sending up clouds of rainbow spray. From there, the river is forced through a narrow and twisting path between walls of steep rock – a churning tumble of Grade V rapids ideal for thrill-seekers looking to test their nerve.

Zambia lies on the northern and eastern side of the falls (which is topographically slightly higher), while Zimbabwe is situated to the south and west. The neighbouring cities of Victoria Falls on the Zimbabwean side and Livingstone on the Zambian side are thriving tourism hubs easily accessed by road, rail or air. Upstream of the falls, the Zambezi River flows across an almost flat basalt plateau in a shallow valley teeming with wildlife and dotted with sedate luxury lodges away from the bustle of the central tourism regions. The two countries are connected by the Victoria Falls Bridge – a 1905 marvel of engineering that spans the Second Gorge, designed as part of Cecil Rhodes’ Cape to Cairo Railway vision.

For those new to Victoria Falls, the first question is usually where to stay – the Zimbabwean or the Zambian side? Fortunately, crossing over to either side is a relatively painless process that requires the simple purchase of a visa and can be easily accomplished on foot. While both sides offer spectacular views of the falls and most activities, there are subtle differences between the two towns and certain attractions that can only be accessed from one or other side.

Victoria Falls is the smaller of the two towns and is almost entirely tourism-based, with a plethora of backpackers, cafes, lively bars, and colourful local markets. The falls are just two kilometres away. Livingstone is slightly larger and offers a more city-like feel and a better representation of authentic local life. It is situated somewhat further from the falls, but the Zambian side is known for its stunning accommodation options along the riverside.

Around two-thirds of Victoria Falls is situated on the Zimbabwean side, which means more viewpoints are accessible from this side. It is also slightly lower than the Zambian side, and during the dry season (see below), water still flows even if the Zambian side has dried up completely.

However, the lower water levels at the start of the dry season open up the seasonal chance to visit Livingstone Island and Devil’s Pool, which are only accessible from the Zambian side. Livingstone Island is often touted as the point at which David Livingstone first set eyes upon Victoria Falls. However, given that the island sits right on the edge of the largest waterfall in the world, one has to imagine that he had an inkling before then. Whatever the case, the island is still a historical landmark and marks the site where Livingstone reeled out a length of calico weighted with a bullet to measure the height of the falls. From there, courageous visitors can swim out to either Angel’s Armchair (June-August) or the more famous Devil’s Pool (late August-December). Here thousands of years of erosion have excavated a deep pool, with a thick rock wall right at the edge of the falls that allows tourists to take daredevil photographs without being carried over the edge by the current. It is vital to accompany experienced tour guides to these attractions, as rigorous safety measures and an intimate knowledge of the river are essential.

Adrenaline Capital of the World

Devil’s Pool is just one of the many adventures on offer in Victoria Falls that have marked it as the “adrenaline capital of Africa”. The rapids below the falls are classified as Grade V and present some of the best white water rafting in the world. Adrift on inflatable rafts, armed with just a plastic oar and a lifejacket, visitors throw themselves on the mercy of the river, safe in the knowledge that expert guides are on hand in kayaks to be of assistance as necessary. There is nothing quite as humbling as experiencing the sheer power of a churning river (especially while underneath it), but the calm stretches also allow for peaceful moments of quiet appreciation of the exquisite gorge views. White water rafting is only possible at certain times of the year, and this will also vary depending on the rainfall. It is guaranteed in August and September, but the season may extend between June and September.

Suppose rafting alone is not sufficient to fill one’s adrenaline quota. In that case, there are several other anxiety-inducing options, including bungee jumping or swinging off the Victoria Falls Bridge, cable gliding/ziplining, abseiling and skydiving. After all that excitement, it is essential to decompress with a more sedate activity like a sunset cruise, a train trip with canapes and cocktails or even the time-honoured tradition of a High Tea in a historical setting.

Naturally, the main attraction is the falls, surrounded by lush forests nourished by spray emanating from the crashing water. The river is usually at its most dramatic from February until May where the greatest volume of water tumbles over the falls. The flip side of this is that there is a chance the falls may not be clearly visible, obscured by the spray. After months of dry weather, the falls reduce and reach their lowest levels towards the end of the year. At certain times of the day, the mist from the waterfall catches the light at just the right angle, creating arched rainbows. Viewed from the forest amidst clouds of butterflies and accompanied by the cries of trumpeter hornbills, the effect is like something out of a fairy tale. Possibly even more magical are the lunar rainbows, visible for three nights a month.

There are two small national parks protecting the falls and their surroundings, the Mosi-oa-Tunya National Park on the Zambian side and its twin, the Victoria Falls National Park, on the opposite side of the river. Though neither are ‘Big 5’ reserves, they are teeming with wildlife. Elephants are everywhere in Victoria Falls (and should be treated with the requisite respect and caution). Visitors can spend time tracking rhino on foot in the Mosi-oa-Tunya National Park. Those searching for a more traditional safari experience (and large predators) can visit the nearby Zambezi National Park in Zimbabwe or travel further afield to Hwange National Park or Chobe National Park in Botswana. Upstream, canoe safaris navigate between hippos and crocodiles while admiring elephants feeding on the banks and searching for the 460 bird species found in the Victoria Falls region.

The magic of Victoria Falls

A Victoria Falls trip offers the perfect escape for almost every traveller, from the solo adventurer and budget-strapped student to families with children and romantic couples. There is a vast range of hospitality options, from shared accommodation in backpacking establishments to ultra-luxurious lodges on the Zambezi banks. The lively towns are filled with historical and cultural experiences.

The changes in seasonal rainfall inevitably impact the tourism experience, and different times of the year will treat visitors to diverse Victoria Falls experiences. The amount of water is seasonally dependent on the amount of rain in the catchment upstream. Typically, the rainy season begins around November/December and continues until April, when the rest of the year remains comparatively dry. As a general rule, the later in the year, the lower the water levels.

Comfortable shoes with sufficient traction are always a good idea, especially for the slippery paths around viewpoints or descending into the gorge. Waterproofing for all equipment is essential, especially when water levels are high. Victoria Falls is a known malaria area, and with quite a high human population density so it is important to take precautions as advised by your doctor.

Things to do in Victoria Falls – this this list

For more on the wonders of Livingstone see here

For more on the adventure offerings around Victoria Falls see here

For more on the geopgraphy of the falls see here