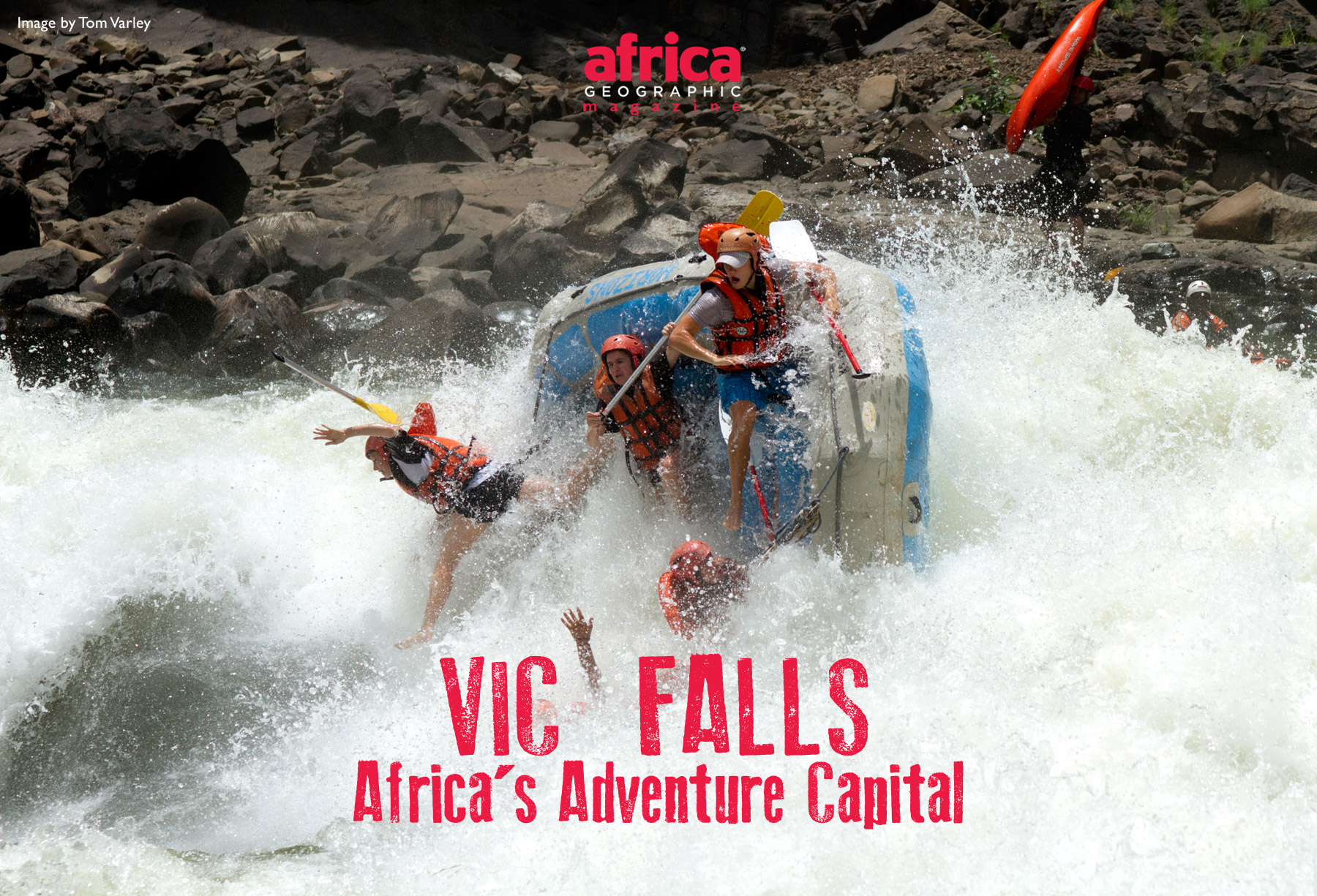 As we lined up for the canopy tour, one of my fellow flyers asked our guide, ‘On a scale of one to white water rafting, how scary is this?’ I laughed because I didn’t understand her question. Yet.
Not far away, another group lined up for the gorge swing. Hysterical screams echoed across the Batoka Gorge as a woman (or perhaps it was a man) jumped off the cliff to swing over the wild waters of the Zambezi River. I had booked my white water rafting adventure with Wild Horizons for a few days later – New Year’s Day at 7am to be exact. Maybe not the best timing, but trust me, I was wide awake and decidedly sober by the end of the first rapid. In fact I may as well have fastened my lifejacket, put on my helmet, grabbed my paddle and jumped headfirst into the raging waters beneath Victoria Falls because I tumbled out before we even reached the first rapid.

People leapt from cliffs to swing like pendulums over our heads

So there I was heading towards what is known as The Wall – a rock face that turns the cascadng water up into a perpetually exploding white froth, holding on to my paddle for dear life with a finger that was broken in three places (in a sailing incident a few days before). But I made it, and I made it down nineteen more raging rapids, passing under the Victoria Falls Bridge where bungy jumpers put their faith in elastic cords, between the cliffs of the Batoka Gorge where people leapt to swing like pendulums over our heads, and past the smallest crocodile in the world, watched over by its much, much larger mother.
As we floated between rapids with names like The Washing Machine, The Devil’s Toilet Bowl and The Three Ugly Sisters and Their Mother, I marvelled at a place that can only fully be experienced in this way. Sheer cliffs covered in emerald foilage towered on either side of the dark green water, baboons watched from the branches laughing at our white-knuckle antics, and a fish eagle sat in a tree, picking at the catch of the day. Apart from the daredevils in the boats, not another soul could be seen. This was bliss. Not the same bliss we had experienced on the Zambezi pleasure cruise along the calmer waters above the falls, replete with G&Ts and bathing hippos. Not the colonial, high-tea that the brochures advertised. This was the Vic Falls adventure we had come for.

We had arrived in Zimbabwe a few days before, eschewing the fancy hotels and percale sheets for a little tent at the Vic Falls Rest Camp – one of the best campsites I have ever stayed at. Despite loving adventure, I find the actual putting-up-of-tents part of camping particularly challenging, but thankfully Gypsy Outpost had set up and kitted out our tent for us, leaving us to focus on our primary goal – enjoying ourselves and seeing in the New Year with adventure and fun. We were all ready, sporting our Jameson Vic Falls Carnival armbands.

Some chose the extreme adventure experience of bargaining for curios

On the first evening we boarded a train to Zim-knows-where, and stopped way out in the bush to view the setting sun, and rock out to some of Southern Africa’s top DJs. The next day, and a little worse for wear, we harnassed up and ziplined over the Batoka Gorge on the Canopy Tour. It is not at the pointy end of the one-to-white-water-rafting scale, but it was an adventure nontheless with spectacular views through what should be renamed “The Gorge of Adventure” towards the iconic Victoria Falls Bridge. Others in our group opted for more sedate, yet still wild, adventures with game drives, canoeing and all manner of wildlife activities, while some chose the most extreme of all adventure experiences – bargaining for curios at the local market.

The high flyers among us took to the skies in microlights or helicopters for a fish eagle’s view of what we had all come to see: Victoria Falls itself. Words cannot describe it, so I will not try. Perhaps the fact that it is one of the seven natural wonders of the world says it all. Or maybe the local name Mosi-oa-Tunya, which means The Smoke that Thunders. It simply left me awestruck.
Standing at the edge of the falls with my mouth agape, I looked across the misty chasm, to neighbouring Zambia where more adrenaline junkies sat or swam in Devil’s Pool – a calm, protected pool on the very edge of the falls, just inches from where the Zambezi plunges into the abyss.

After soaking up the romance of the falls, we turned our attention back to our New Year adventure and the Vic Falls Carnival. We danced ourselves psychedelic at Zimbabwe’s first colour festival before welcoming in the New Year to the opening track of the Lion King thundering through the speakers: Nants ingonyama bagithi Baba! (Here comes a lion, father!). A torrential thunderstorm soon accompanied the music, but headline act Goldfish took it in their stride, playing “Oo, when we come together, no matter the weather” to an adoring crowd. The thunder rolled through the clouds and the rain cascaded down, but that wasn’t stopping the revelers. We had all come for adventure, and the storm was just another part of it. 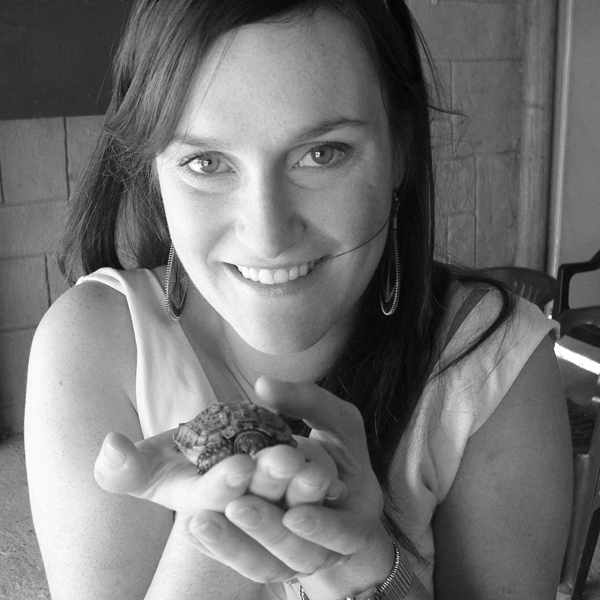 JANINE MARÉ is the first to confess that she has been bitten by the travel bug… badly. She is a lover of all things travel from basic tenting with creepy crawlies to lazing in luxury lodges; she will give it all a go. Janine is passionate about wildlife and conservation and comes from a long line of biologists, researchers and botanists. Janine is a former marketing manager at Africa Geographic, and is now a freelance content marketing specialist. 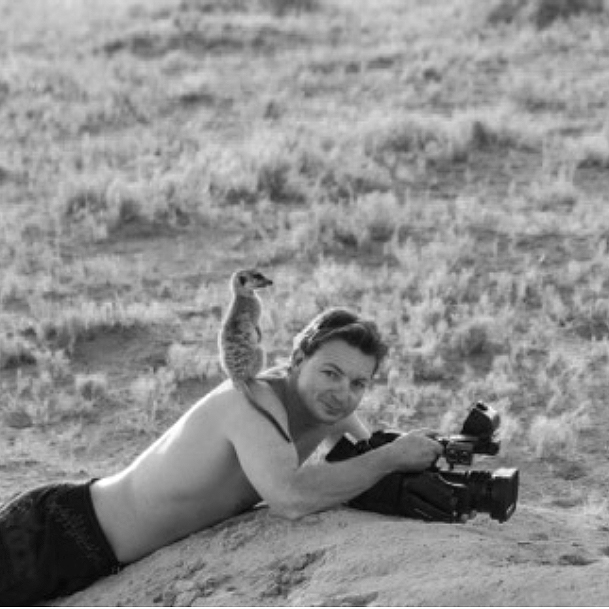 TOM VARLEY was raised in the Zimbabwean bush. At the age of 10 he moved to Victoria Falls where he graduated from being a safety kayaker to a raft guide and then videographer. After earning his Learner Guide’s License at sixteen, Tom joined the British Army where he served in The Royal Green Jackets Recee Platoon for three years. During his service in Bosnia Tom was responsible for aerial reconnaissance photography for Nato. In 2002 Tom came back to Victoria Falls to pursue his passion for kayaking. After producing rafting videos and photographs he progressed to filming and photographing wildlife and scenery in Zimbabwe, Southern Africa and Israel. Tom now has a well established production company, Victoria Falls Productions, and has worked with several international TV channels including BBC and National Geographic. He published a coffee table book ‘The Magnificent Victoria Falls’ in 2010.