As the largest waterfall in the world, Victoria Falls needs very little in the way of introduction. Even to the uninitiated, the name conjures images of breath-taking vistas, lush and verdant vegetation, thrill-seeking and, of course, water thundering down into gorges releasing spray that can on occasion be seen kilometres away. The falls are also officially known as Mosi-ao-Tunya or “The Smoke That Thunders” in the Lozi language of the area – a name that perfectly captures the almost mystical atmosphere of this World Heritage Site.

Upstream of the falls, the Zambezi River flows across an almost flat basalt plateau in a shallow valley before reaching the fracture in the plateau with a vertical drop into First Gorge, around 100 metres below. At this point, the Zambezi is 1,708m in width, creating the largest continuous falling curtain of water in the world. From there, the river narrows through a series of awe-inspiring gorges. Geographically, Zambia lies on the northern and eastern side of the falls which is topographically higher, with Zimbabwe to the south and west. Naturally, the amount of water flowing over the falls is seasonally dependent on the amount of rain that falls into the catchment upstream – typically, the rainy season begins around November/December and continues through until April when the rest of the year remains comparatively dry.

The changes in seasonal rainfall inevitably impact the tourism experience and different times of the year will treat visitors to diverse ways to experience the falls. The river is usually at its most dramatic from February through until May where the highest amount of water tumbles over the falls. The flip side of this is that there is a chance that the falls may not be clearly visible, obscured as they are by the rainbow-lit spray. After months of dry weather, the falls begin to reduce in size and reach their lowest levels towards the end of the year. This too presents different opportunities for visitors, allowing them unobscured views of the falls and the opportunity to go rafting.

Over the past few years, there has been a degree of social media speculation and even panic as the dry season reaches its peak and the river levels drop, particularly because the topographically higher Zambian side often slows to a minimum and occasionally stops flowing in places. However, at the end of 2019, this story was seized upon by international news media that ran with alarmist headlines suggesting that the Falls was completely dry – pictures that were taken from the drier parts of the Zambian side were used to emphasize the seeming urgency of the situation. The Zimbabwe side of the falls, still flowing and still spectacular, was largely ignored and most media outlets initially neglected to mention the seasonal fluctuations of the river.

The narrative that the falls were in danger of drying up completely and were at their lowest-ever levels was far from being supported by facts. The Zambian River Authority monitors the water levels each day and has records that go back decades. While the water levels did come close to the low levels seen in 1995/96, the improvement was already being seen as the story gained international traction-a fact that was largely ignored. At the time of writing, the water levels have been steadily increasing and are now higher than they were at the same time last year. Records going back further showed that some of the lowest-ever recorded levels were seen in the early 20th century – yet no reference was made to this fact. Nor was there mention of the water that is diverted away from the eastern cataract to supply the power station below the falls.

Scientists have not ignored the anthropogenic impact on the flow of the Zambezi – in a 2012 report published by International Rivers, Dr. Richard Beilfuss examines the numerous factors affecting the flow of this river system, including hydroelectric power, seasonal weather changes and the potential impact of climate change. While the cause for concern is clear, he also notes that “[t]he Zambezi River Basin has one of the most variable climates of any major river basin in the world, with an extreme range of conditions across the catchment and through time.” The graph below taken from his report shows the average yearly discharge at the falls. Note that there have been at least three other examples of extreme lows: 1914, 1948 and 1995, often followed by years of high flow rates. 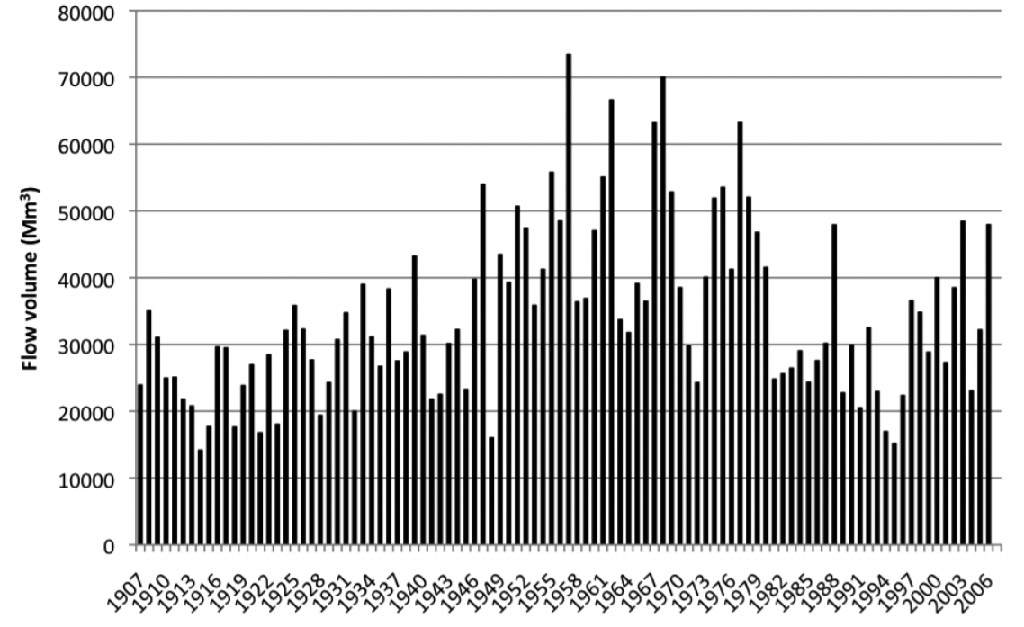 In an area where tourism is not just a vital part of daily life but essential to the survival of the surrounding communities, it does not take a massive leap of intuition to imagine the potential effect of the fearmongering of international news media. Several tourism operators reported cancellations (our own travel team had to council safari clients that were concerned about the reports) and, while the ultimate effect on tourist statistics remains to be seen, the furious response of Victoria Falls locals is easy to understand. Many took to social media to showcase their photographs or videos taken in front of the flowing falls and the hashtag #VictoriaFallsIsNotDry became a vent for their growing frustration. In a furious response to one particular news outlet, a well-known member of the tourism community in Livingstone, Peter Jones, wrote “[f]or those of us living at the Victoria Falls, both in Zambia and Zimbabwe, we are picking up the pieces after your whirlwind visit to incorrectly inform the world the mighty Victoria Falls was in danger of drying up…We have all lost bookings and business in some way as a result of your misinformation [and] some people’s lives have taken a very definite turn for the worse.”

The impact of such reporting is deeply regrettable, not only in terms of the impact it will inevitably have on tourism revenue, but in the effect it has in polarising already divergent views. In ignoring or glossing over the facts, the message loses all credibility and fails its conservation agenda. Most importantly, the very real threat facing the people of certain parts of Zambia and Zimbabwe struggling to sustain themselves after an extended regional drought has been lost in the social media hysteria and subsequent backlash. The impact of dams and irrigation on some of Africa’s main river systems, as well as the socio-economic demand for electric power, has been ignored in favour of the more attention-grabbing “climate change” headings.

In an official statement in response to the reports on the state of Victoria Falls, the African Travel and Tourism Authority noted that “[w]hilst we are cognisant that Climate Change [sic] is a growing concern on a global level, and that it is potentially having an impact on countries throughout the world, what has been lacking in the media reports is an insight into the historic seasonal patterns and the resultant changes in water flow which are vital pieces of information to ensure a clear perspective is maintained”.