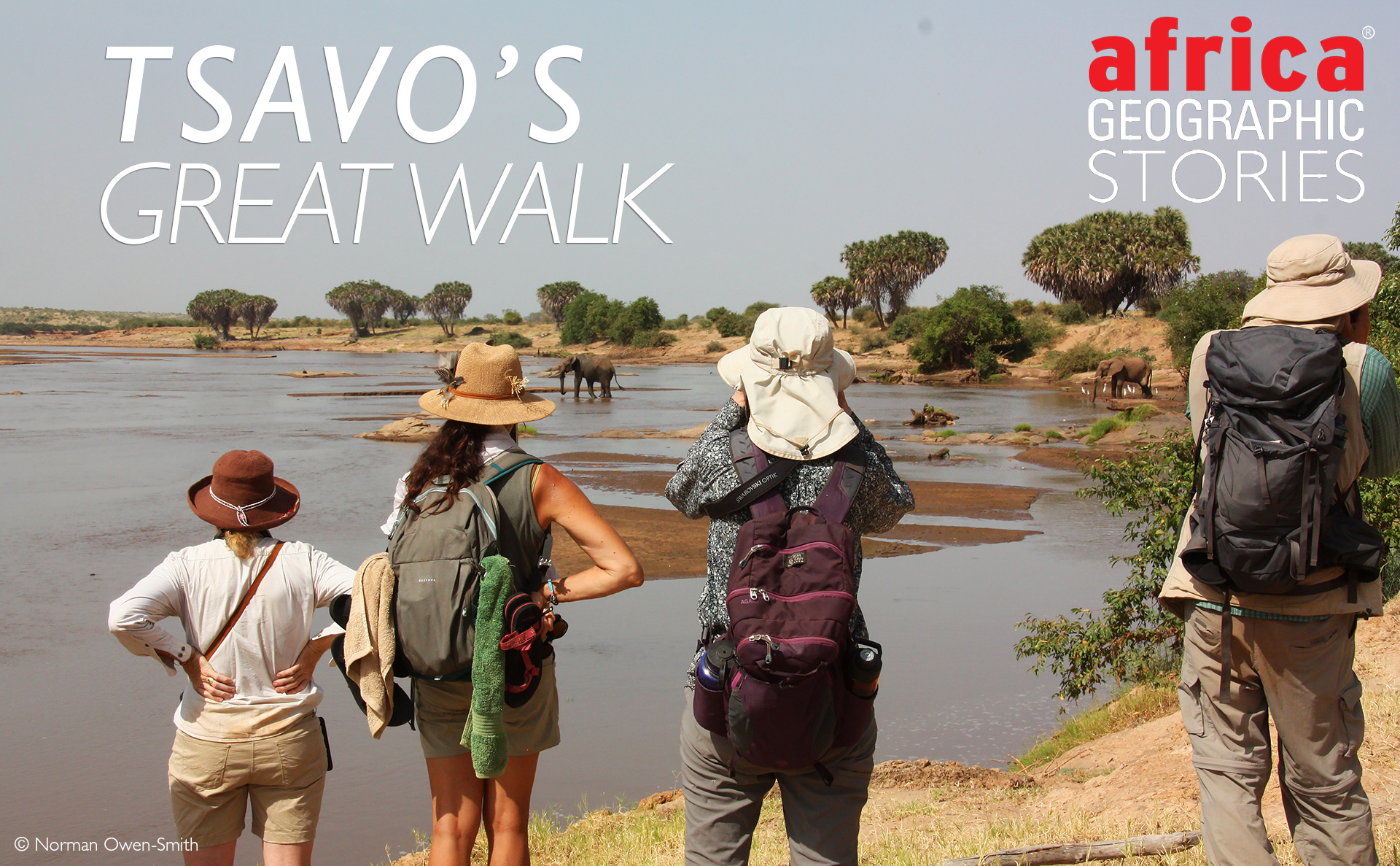 Traversing the kingdom of elephants on foot 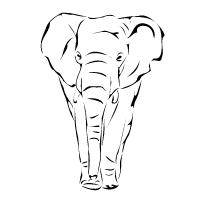 I recently had the privilege to realise my lifelong dream of travelling across Tsavo National Park in Kenya on foot on the ‘Great Walk’ with Africa Geographic. I was confident that, even at 80 years of age, I could handle the target of accomplishing 160 km (100 miles) over ten days of walking.

Moreover, I desperately needed to break out of the confines imposed by the pandemic, which had scuttled several planned trips. This expedition to the kingdom of elephants offered an opportunity to remain almost entirely in the open air in a remote area, minimising the risk of infection.

Tsavo National Park has a rich, and at times tumultuous, history. In 1898, two maneless lions terrorised workers constructing the railway from Mombasa to Nairobi, where it crossed the Tsavo River, devouring at least 28 people before they were shot (providing the subject for the film The Ghost and the Darkness). After the park was proclaimed in 1946, elephant population levels increased so much that scientists called for culling. The population later stabilised when at least 6,000 elephants later died in the park during a severe drought in the early 1970s. The death toll was mostly made up of mother elephants and calves confined to the vicinity of the Galana River, where food had run out. This was followed by rampant poaching, which reduced the elephant population in the park from around 25,000 to not much more than 5,000 animals. By 1989, black rhinos were almost eliminated by poaching. Since then, the vegetation has been recovering, while the elephant population has increased to around ~12,000 animals. By 1995, when I first visited the park, signs of the past damage by elephants were not very apparent, apart from the absence of baobab trees. But it was challenging to make a fair assessment back then from the confines of a motor vehicle.

The Great Walk of Tsavo

Fast forward to our Great Walk this year. Our walking route followed the Tsavo River from where it enters Tsavo in the west to its junction with the Athi River and continued along the Galana River to exit the park in the east. This Great Walk is a single segment of a much longer expedition travelling from the summit of Kilimanjaro to the ocean north of Mombasa, a distance of 480km+. Our walk through elephant country was lavishly supported in terms of camp facilities and food by a team who shifted tents and fresh supplies from one camping area to the next while we traversed the wild, roadless areas on the opposite side of the two rivers. We had to wade across rivers to connect our walking route with camping facilities. Although the water was no more than thigh deep, there was no guarantee that a crocodile wouldn’t appear, adding to the thrill of the journey. However, we were well protected by skilled armed guides stationed at the front and back of our walking party.

A reasonable degree of fitness is needed to cope with the daily distance targets of 15 km or more, primarily through the midday heat. Our guide, Iain Allan, conveyed much of his 40-year knowledge of the region and its history, of films old and new and of his travels as an accomplished mountaineer. He has never tired of leading another walking expedition through Tsavo because each provides unique experiences.

Our group consisted of eight people, including my wife and me, plus two couples from the USA who had been on many expeditions before and two women from Australia. Our daily walk began each morning at 7:00 and ran until 13:00. Afterwards, we would enjoy a cooked lunch with fresh salads and fruit. After lunch, we spent afternoons resting until it was time for a game drive. This was followed by sundowners overlooking the river alongside our camp. These sundowners gathering us around varying river views at dusk were especially delightful.

Camping arrangements provided the luxury of comfortable beds, each tent with its own little pit toilet and bucket shower, plus expertly cooked meals.

This trip provided several memorable encounters. We walked through dense shrubbery along hippo paths, trusting that the hippos would be immersed in their aquatic refuges during the day while still facing the prospect of close encounters with elephants and buffalos. Thankfully, all the hippos we saw while walking were in the river, but we were aware of incidents on previous walks when walkers had to be protected from charging hippos. Charging elephants have also, on occasion, been deflected by warning shots. Crocodiles have not caused any injuries, but every precaution was taken to cross rivers in shallow water where elephants cross. The group was kept tightly bunched until we reached the safety of land. The vegetation near the Galana River is much more open and grassy, which allowed us to see animals at a distance, and vice versa – apart from the dense salt-bush shrubbery that we had to traverse frequently to get to or from the river.

Elephants revved us twice. Once, just as we entered a tricky section of thick vegetation between the Tsavo River and a steep rocky slope, there was a loud trumpet, and our guide urged us to head back hastily and ascend the hill as high up as we could. Our passage had been blocked by a giant bull elephant evidently in musth. Fortunately, he deviated up the slope, and we were able to traipse cautiously past.

The second incident involved two female elephants in a family group. They headed towards us with a loud trumpet but veered off when we retreated hastily. We passed by many other elephants, but most remained oblivious to our presence.

We had another fright when a buffalo bull galloped out of a salt-bush clump just behind us, heading off as fast as he could.

Even more thrilling were the three encounters we had with lions. In two instances, the lions were sleeping, and we crept on without disturbing them. On the third occasion, two lions ran off across the river when we appeared close by. Fortunately, the lions of Tsavo have not retained any tradition of hunting humans, preferring buffalos.

We enjoyed sightings of giraffe, zebra, fringe-eared oryx, waterbuck, Peter’s gazelle (a subspecies of Grant’s gazelle), impala, hartebeest, dik-dik, a single lesser kudu, two gerenuk and even a brief glimpse of a honey badger – with most sightings taking place in the open dry country north of the Galana River. Unfortunately, once abundant in the region, black rhinos are now rarely seen in the area. I wondered how we would have coped with these cantankerous animals puffing towards us out of the thickets.

We saw many birds; most notably huge swarms of queleas and an aggregation of Somali bee-eaters at a Delonyx tree that was flowering and attracting bees. Among the reptiles, we saw just one snake – a cobra – and a large monitor lizard. Among insects, it was fascinating to see large numbers of white Belanois butterflies around Boscia bushes, fluttering westwards. Were they connected with the similar butterflies that we see flying in the Highveld in mid-summer going east, perhaps in some great spiral? Surprisingly, we did not experience mosquitos or tsetse flies.

The experience of being completely immersed in the wild Africa that shaped the evolution of our species for two whole weeks is unique to this Great Walk. Tsavo National Park is fascinatingly different from other East African parks in its landscapes, vegetation and fauna.

Want to head out on the Great Walk for your next safari adventure? Have a look at the itinerary here and get in touch with our travel team to start the discussion.

Want to head out on the Great Walk? Join AG on this amazing safari to experience Tsavo on foot.

Guests of Africa Geographic went on an 80km walking trail to follow giants in Tsavo – read more about their experience here.

For more by the author, check out Norman Owen-Smith’s book, Only in Africa: The Ecology of Human Evolution

Norman Owen-Smith was a former professor of African Ecology at Wits University until his semi-retirement and remains involved in research. His studies have focused on large herbivores and their interactions with savannah vegetation – particularly white rhinos, kudus and sable antelope. His most recent book ‘Only in Africa’ addresses the evolutionary ecology of human origins in Africa. He has backpacked widely in remote areas in Africa, North America and Nepal.