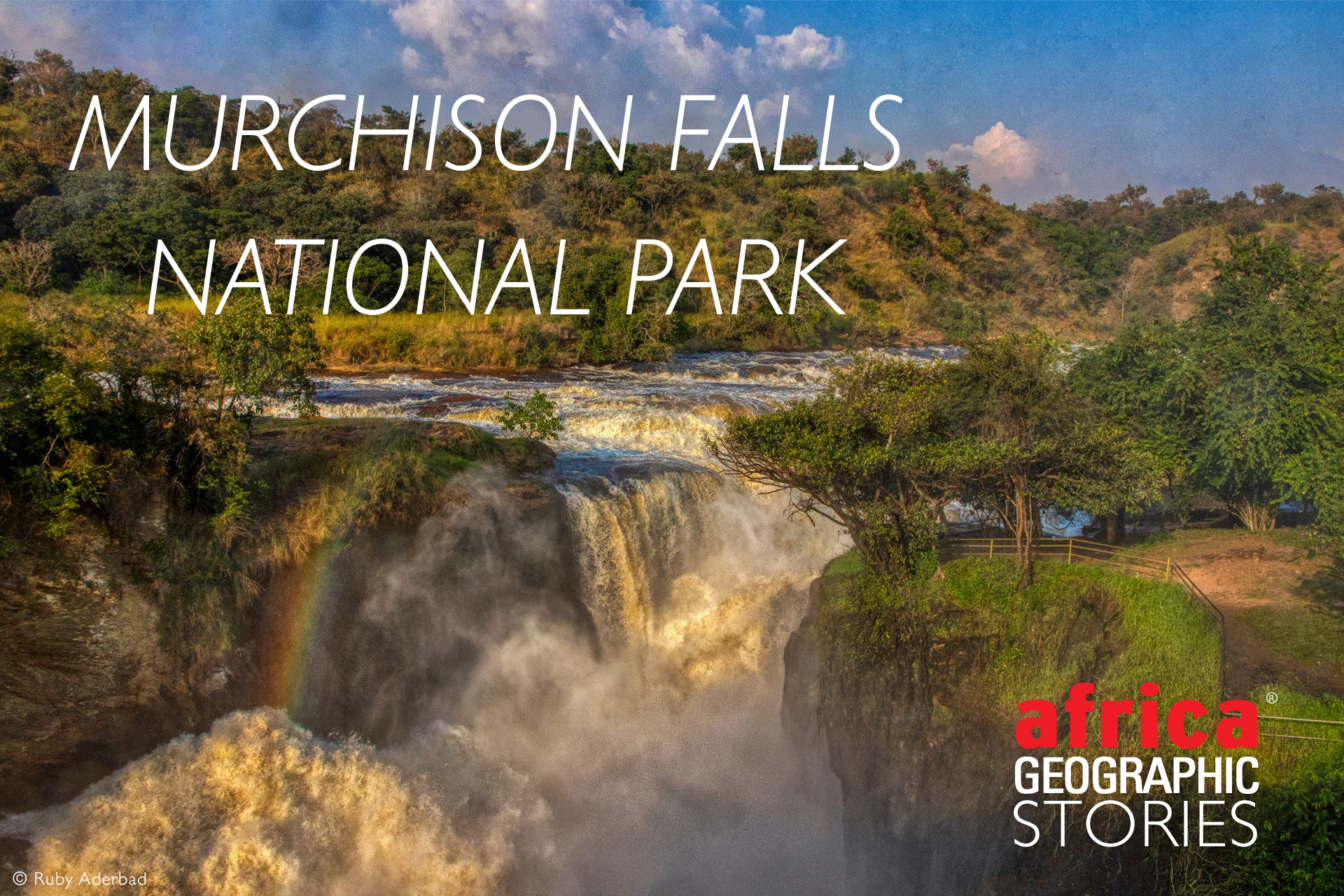 In the heart of Murchison Falls National Park, the stone edifice of an enormous, historic lodge looms out of the tangled, overgrown vegetation. The shell of the old Pakuba Lodge, complete with an algae-tinted, blue-tiled swimming pool, is all that is left of the once grandiose establishment overlooking Lake Albert. Through the empty rooms and deserted grounds, whispers of sinister history wind their way through the ruins. Pakuba was once the favourite hideaway of former Ugandan dictator Idi Amin – he gathered here with his inner circle to plot and plan their dominance over the region’s people.

Today, over four decades later, the wild has reclaimed old Pakuba Lodge (watch). Lions and spotted hyenas slink through the rubble, and leopards stash their kills in surrounding trees. Warthogs and porcupines have excavated tunnels below the foundations, baboons and monkeys leap from pillar to wall, and elephants feed peacefully on the savannah below. It is undeniably allegorical – a testament to the resilience of Africa’s wild, the astonishing recovery of Murchison Falls National Park and the gradual healing of Uganda. 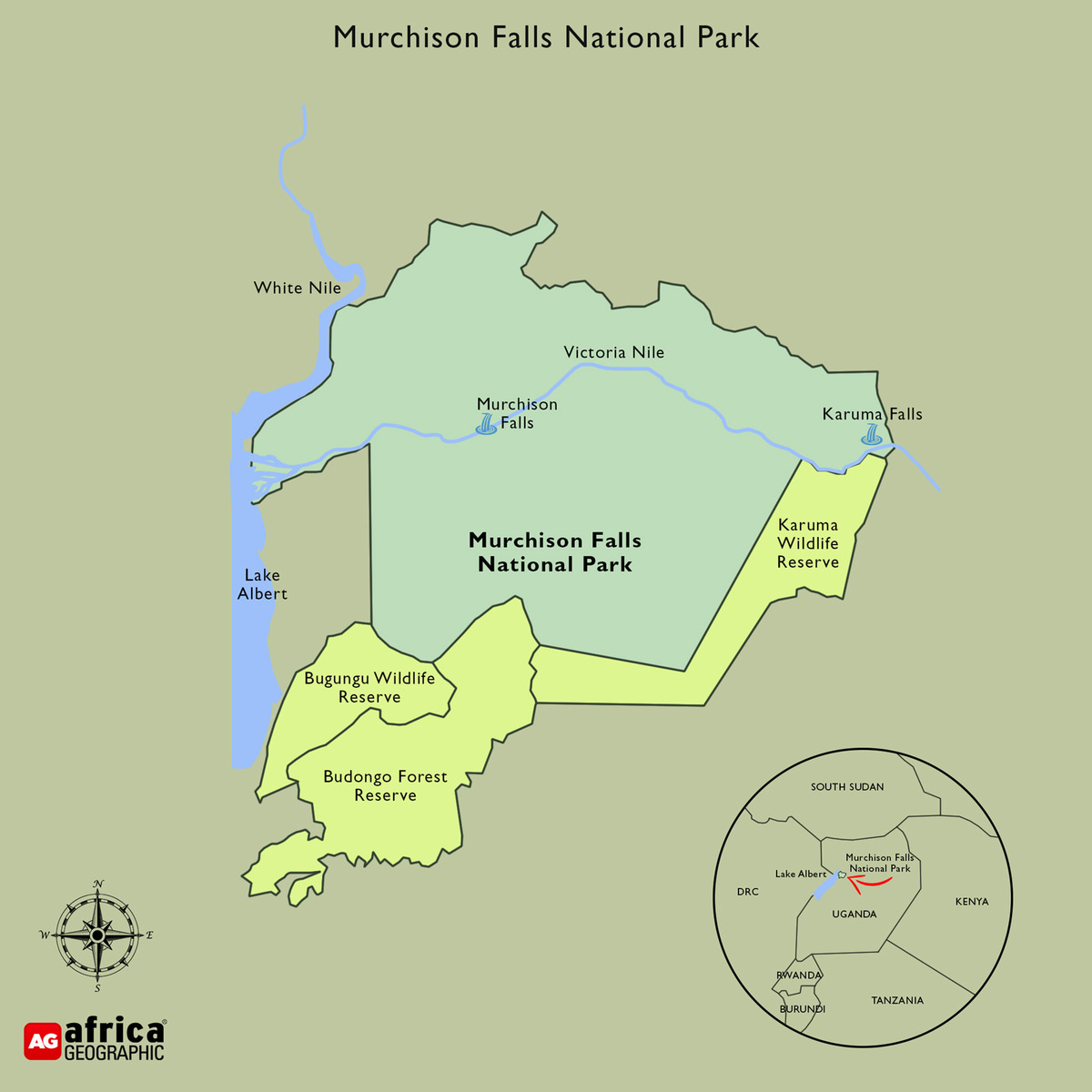 Murchison Falls National Park is situated on the western edge of Uganda and covers some 3,840km2 (384,000 hectares) of wilderness on both sides of the Nile River, east of Lake Albert and west of Karuma Falls. It is one of Uganda’s oldest and largest protected areas and was once Africa’s most visited park. Today, the national park is part of the greater Murchison Falls Conservation Area. To the south, west and east, it is contiguous with Bugungu Wildlife Reserve (782km2 – 78,200 hectares), Budongo Forest Reserve (825km2 – 82,500 hectares) and Karuma Falls Wildlife Reserve (720km2 – 72,000 hectares). These reserves, while diverse ecosystems in their own right, serve a vital function as buffer zones between the national park and the rural villages of western Uganda.

The landscape is dominated by savannah-woodland habitat dotted with Borassus palms and encompasses vast tracts of tropical forests, swathes of grassland and wetland habitats. The park is divided by a stretch of Nile River known as the Victoria Nile, which creates a tapestry of riverine habitat and flows into the park’s eponymous waterfall – its most distinctive feature. Murchison Falls, named after famous British geologist Sir Roderick Murchison (who, incidentally, believed Africa to be a geologically boring continent), marks the river’s entry to the East African Rift. Here some 300 cubic metres of water per second is forced through a narrow gorge just seven metres wide before plunging 43 meters in a cloud of mist and churning water. These dramatic falls, lined by verdant plant life, can be viewed from above after a short hike or at a more leisurely pace in a boat from below.

A brief history of recovery

During the first half of the 20th century, Murchison Falls and its surrounds were a hunting playground for the wealthy. In 1909, President Theodore Roosevelt famously paid a visit to the region as part of the most lavish hunting safari of all time. By the end of his year-long trip across East Africa, the Smithsonian-Roosevelt Africa Expedition had killed and collected 11,400 specimens for the Smithsonian Institution.

By the mid-century, hunting activities became more regulated and, as animal populations recovered, the then Bunyoro-Gulu Game Reserve became Murchison Falls National Park. In the 1960s, it was one of the premier safari destinations in Africa, boasting up to 60,000 visitors annually. However, with the rise of Idi Amin’s despotic reign and resultant genocide, the park’s (and Uganda’s) wildlife populations were decimated by uncontrolled (and state-encouraged) hunting and poaching. Murchison Falls National Park’s rhinos were killed off entirely, and the elephant population was reduced to fewer than 500 individuals. Carnivore and herbivore numbers suffered equally at the hands of soldiers and desperate civilians.

Though Amin was ousted in 1979, it was to be another two decades before the Uganda Wildlife Authority and the Uganda Conservation Foundation were able to stabilise the core tourism area of the park. Recovering tourist numbers supported the painstaking work of restoring the park to its former glory. Though poaching, particularly snares set for bushmeat, has remained a serious concern on the outer fringes, concerted efforts have been made to ensure there is investment in surrounding communities. In addition to everything from education initiatives to employment schemes, 20% of the gate fees are fed back to the community.

In short, the restoration of Murchison Falls National Park has built a solid foundation for the park’s long-term future.

An Assortment of Animals

The restoration efforts have proved exceedingly successful for much of the wildlife of Murchison Falls, and visitors today are likely to find themselves overwhelmed by the smorgasbord of life on display. Resident hippos cast a wary eye in the direction of the various boats, while enormous Nile crocodiles up to six metres long glide silently through the water or wait patiently for their unsuspecting prey. Against the backdrop of magnificent scenery, lions stalk herds of Ugandan kob or fill the night air with their sonorous roars, accompanied by the “whoops” of spotted hyenas. Though leopard sightings are not guaranteed, it is well worth scanning the crown of the enormous sausage trees in the hopes of a spotted cat draped across a bough.

Murchison Falls is also home to the largest population of the threatened Rothchild’s giraffe (now believed to be conspecific with the Nubian giraffe and a subspecies of the Northern giraffe). The park is also well-known for its huge herds of buffalo and elephant.  Rare, ground-dwelling patas monkeys pick their way through the grasslands. Rhinos have yet to be reintroduced to the park, but visitors can easily spend a day tracking them on foot in the neighbouring Ziwa Rhino Sanctuary.

Chimpanzee trekking is another major highlight for many visitors to Murchison Falls. The adjacent Budongo Forest is home to 600-700 chimpanzees. Some of the families have been researched and habituated for the past 30 years. Field Assistants from the Budongo Conservation Field Station can recognise individual chimpanzees on sight, which only adds to what is already a profound and humbling experience.

Under certain circumstances, visitors may also be allowed to participate in chimpanzee habituation – a rare opportunity in the world of large primate tourism. While typical chimp treks only allow for an hour spent with the animals, the habituation experience typically entails an entire day spent in the company of chimpanzees. For lucky tourists, this means accompanying our closest cousins from the time they rise until they make their nests for the evening. The experience is made even more memorable by the giant mahoganies, figs and ironwoods of the magical forest scenery.

The Birdlife of Murchison

Not to be upstaged by the mammal abundance, the birds of Murchison Falls present an equally spectacular profusion with over 450 recorded species. For birders and non-birders, the prehistoric Shoebill is high on the list of must-sees, and the swampy delta of the Nile and Lake Albert is one of the best places to spot one. Birders can cruise the river, scanning the reeds for a flash of slate-grey feathers and listening out for the characteristic call of the black-headed gonolek or checking closer to the waterfall for rock pratincoles.

The next step for avian enthusiasts is a trip along the Royal Mile in the Budongo Forest Reserve. White-thighed hornbills fill the air with their loud croaks while Nahan’s francolins, Cassin’s and Savine’s spinetails, blue-throated rollers, Ugandan woodland-warblers and tiny chocolate-backed kingfishers are all present along the mythical Royal Mile.

The exceptional variety on offer in Murchison Falls spills over into experiences and accommodation options. There are numerous basic yet pleasant camping sites and lodges for the more budget-restricted traveller, and the year-round warm climate makes camping a convenient and cheap possibility. (However, it is essential to remember that tsetse flies are present in the park, and precautions should be taken to keep them at bay). For those keen on an even more intimate natural immersion, arrangements can be made to camp in a private section of the park with an armed ranger. Self-drive through the park is permitted, though this should be done with some forethought and planning, including factoring in a ferry ride to cross the Nile from one side of the park to the other.

There are a handful of lodges that offer exclusive accommodation and facilities, including a vehicle and guide to make the most of the safari experience. For camps & lodges at the best prices and our famous ready-made safari packages, log into our app. If you do not yet have our app see the instructions below this story. 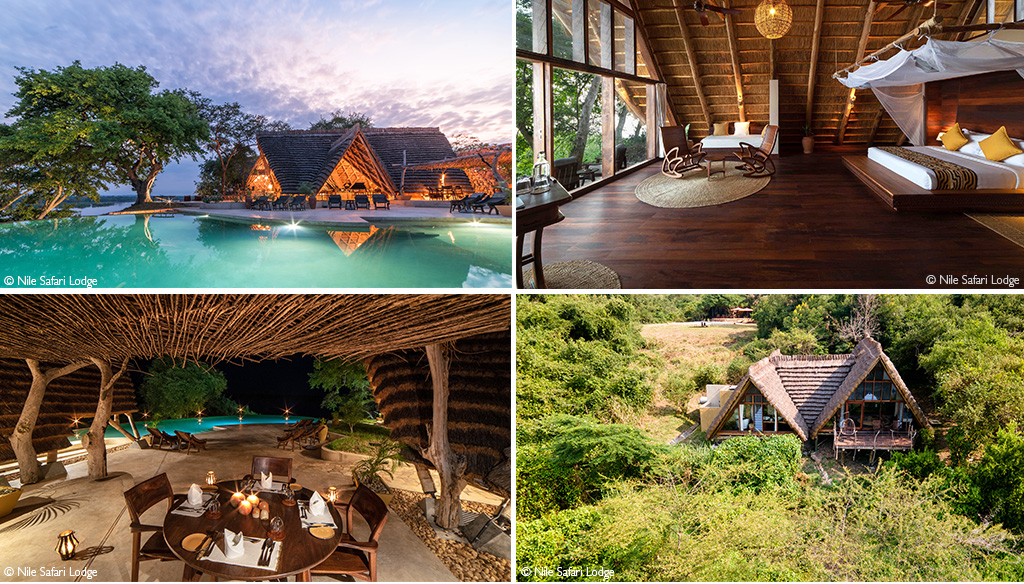 Weather-wise, Murchison Falls has something to offer all year round. The dry seasons from June to August and December to March offer the best wildlife viewing, and the entire park will be accessible. The Nile is also relatively low, making the dry season the best time to view the falls. This may sound counterintuitive, but spray due to high water levels can obscure the view entirely and force the sightseeing boats to stay further away. The rainy seasons are best enjoyed by the more relaxed traveller, content on enjoying lower rates, a quieter park, green surroundings and the best birding.

It is also possible to view the park from a hot air balloon. The experience of silently (mostly – the burner is loud when it is fired) gliding through the sky and watching the landscape racing below is exciting and evocative. Though perhaps a bit of a stretch, it is easy to imagine what a bird of prey might see as they glide through the air.

Murchison Falls – a park on the rise

Whatever its history, Murchison Falls National Park has its gaze fixed firmly on the future. Careful planning has created a positive feedback loop of increased tourism and improved conservation measures. Step by step, the park is well on its way to returning to its historical place as one of Africa’s most prized safari destinations.