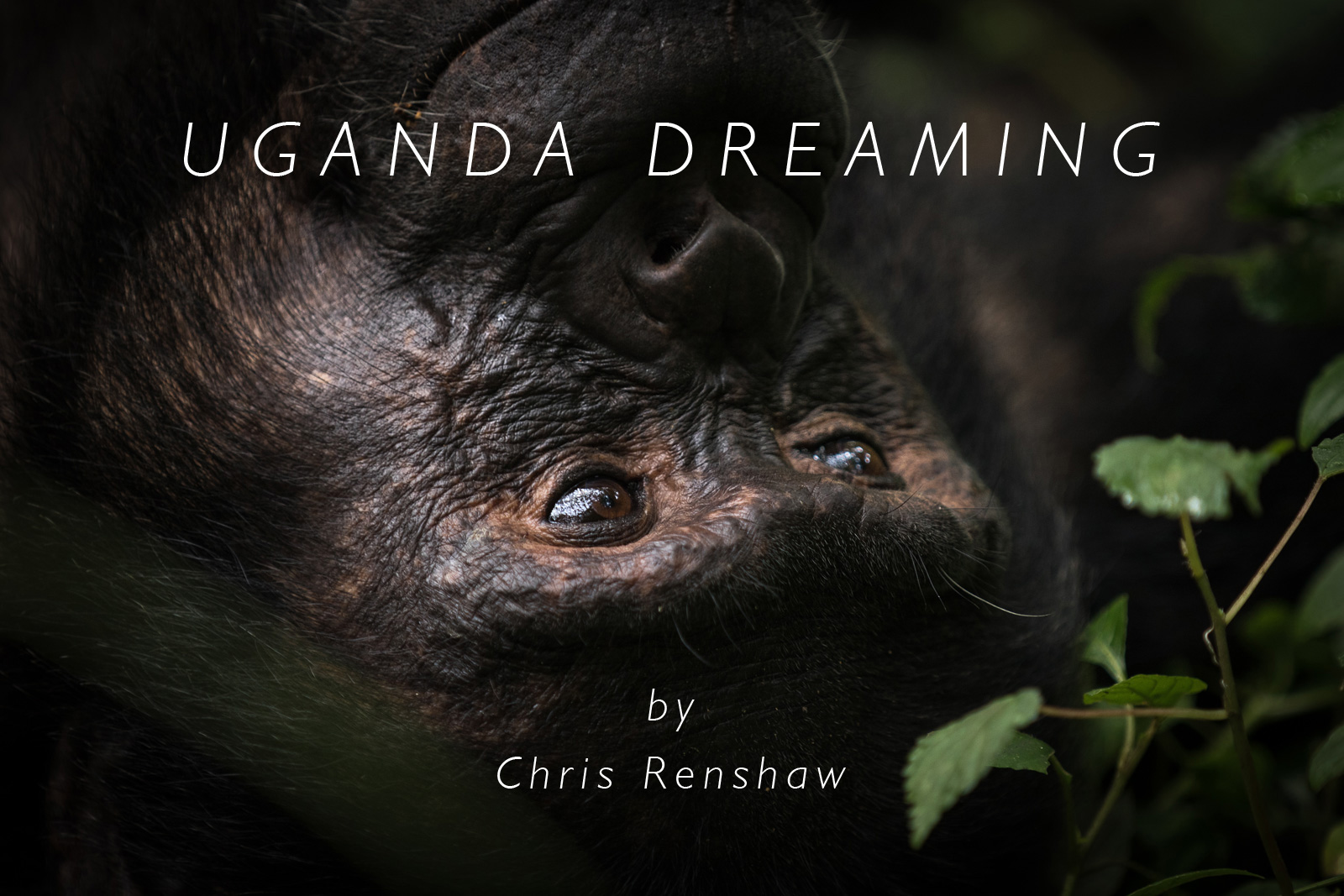 Chris Renshaw is our 2015 Photographer of the Year; his prize a dream safari in the wilds of Uganda’s Albertine Rift with renowned photographer Albie Venter.
The Albertine Rift is a 1,200 km long rift valley in central Africa that splits Uganda, the Democratic Republic of Congo, Rwanda, Burundi and Tanzania. The valley, which is flanked by some of the highest mountains on the continent and includes a series of notable lakes, is also prime territory for endemic birds and rare primates.
Chris took his dad along on the trip, and their itinerary included the scenic splendours and shoebill storks of Murchison Falls National Park, chimpanzee trekking in Kibale National Park, classic game viewing in Queen Elizabeth National Park and of course mountain gorilla trekking in Bwindi Impenetrable National Park. The journey was an extraordinary one, filled with new species, adventures and once in a lifetime experiences – one of the most memorable for Chris being the opportunity to take his father along so he could complete the epic journey he began in 1969.
Chris was kind enough to share some of his stunning Uganda images with us. 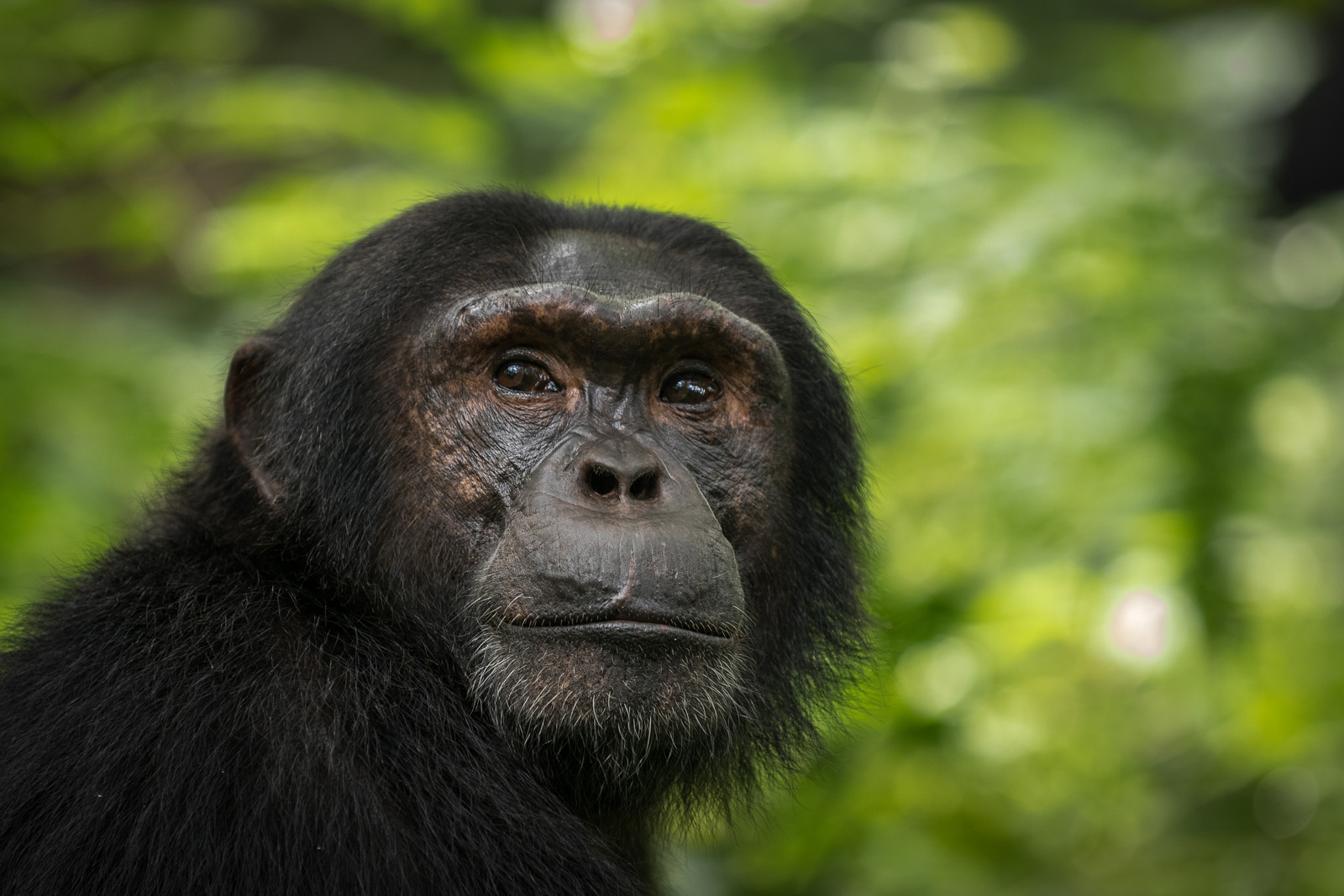 The intensity of a troop of chimpanzees is hard to explain. They appear and disappear magically, but the sounds and the palpable strength of the troop can be felt. This was one of the first adults that we saw. He looked back at me with a curious, but unfazed look in his eyes. 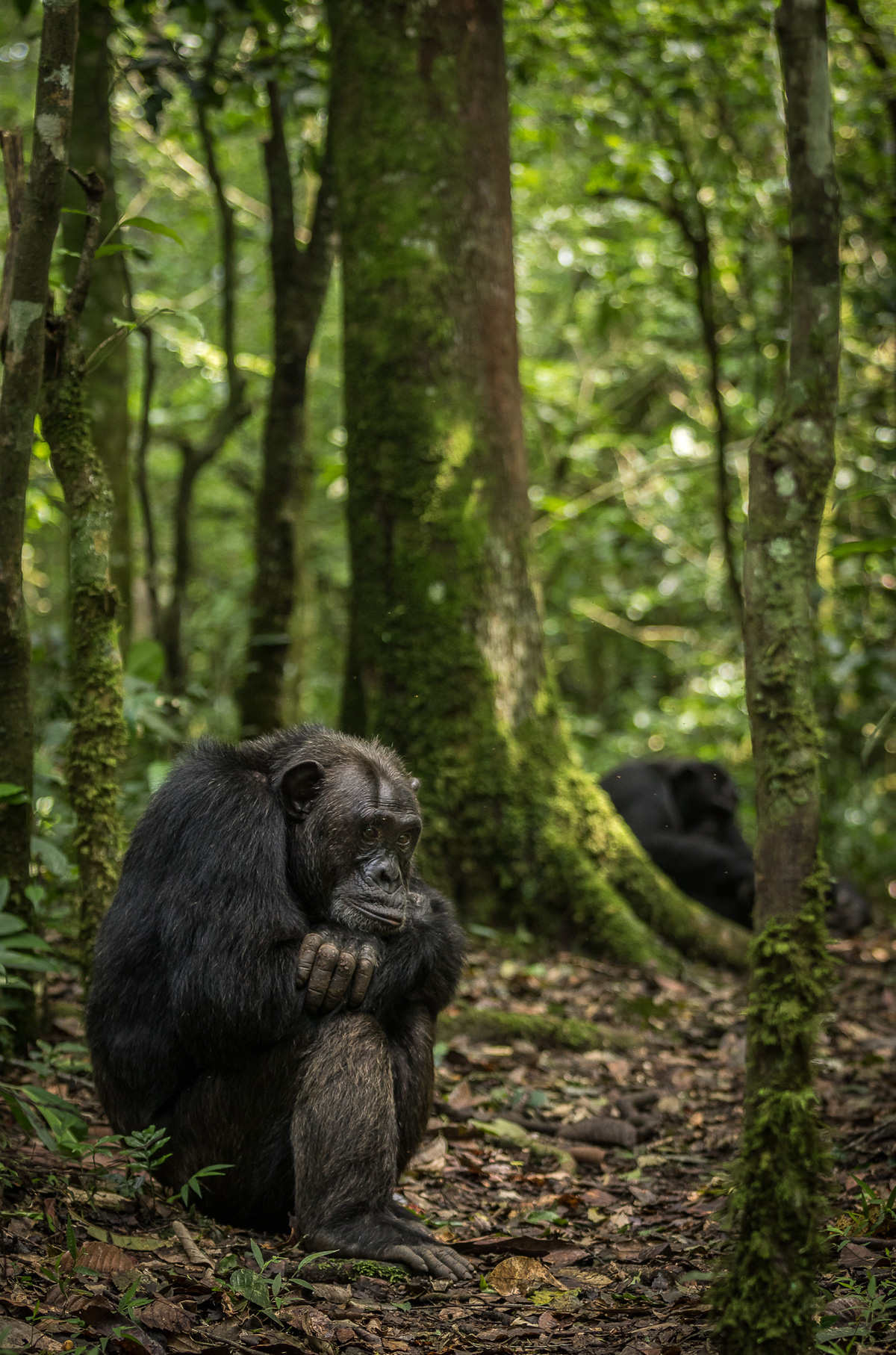 This chimpanzee has truly lived. He is over forty years old and is the leader of the family or “whoop” of chimpanzees that we spent time with. I love this image as you can see the weariness he feels at constantly being challenged to lead the troop. There is a very human expression on his face, one that we can relate to as we have similar feelings and challenges in our own lives. 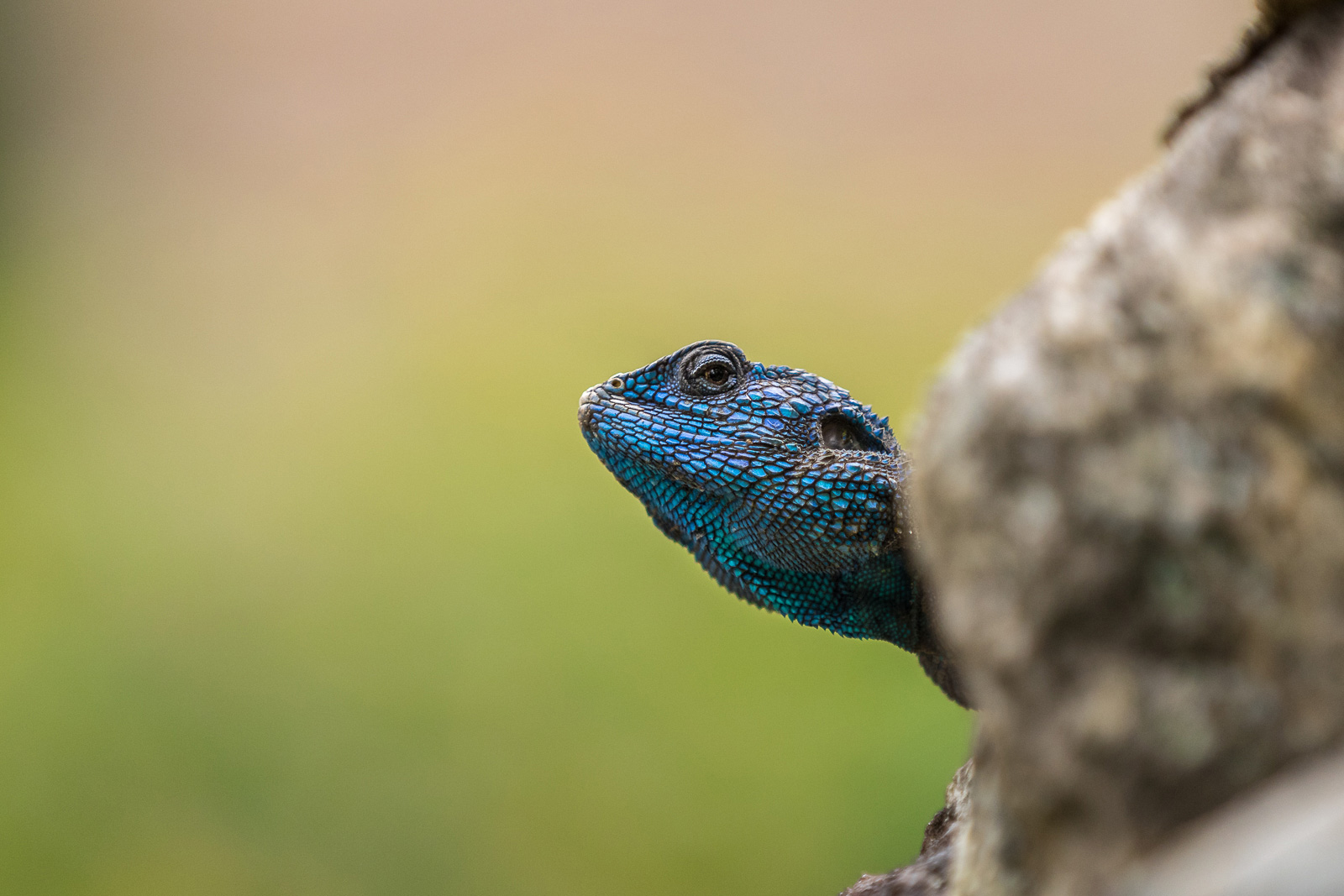 There is a huge array of creatures in the Kibale forest. This blue-headed tree agama popped his head out from a rock after while we were having lunch after an amazing day trekking chimpanzees. 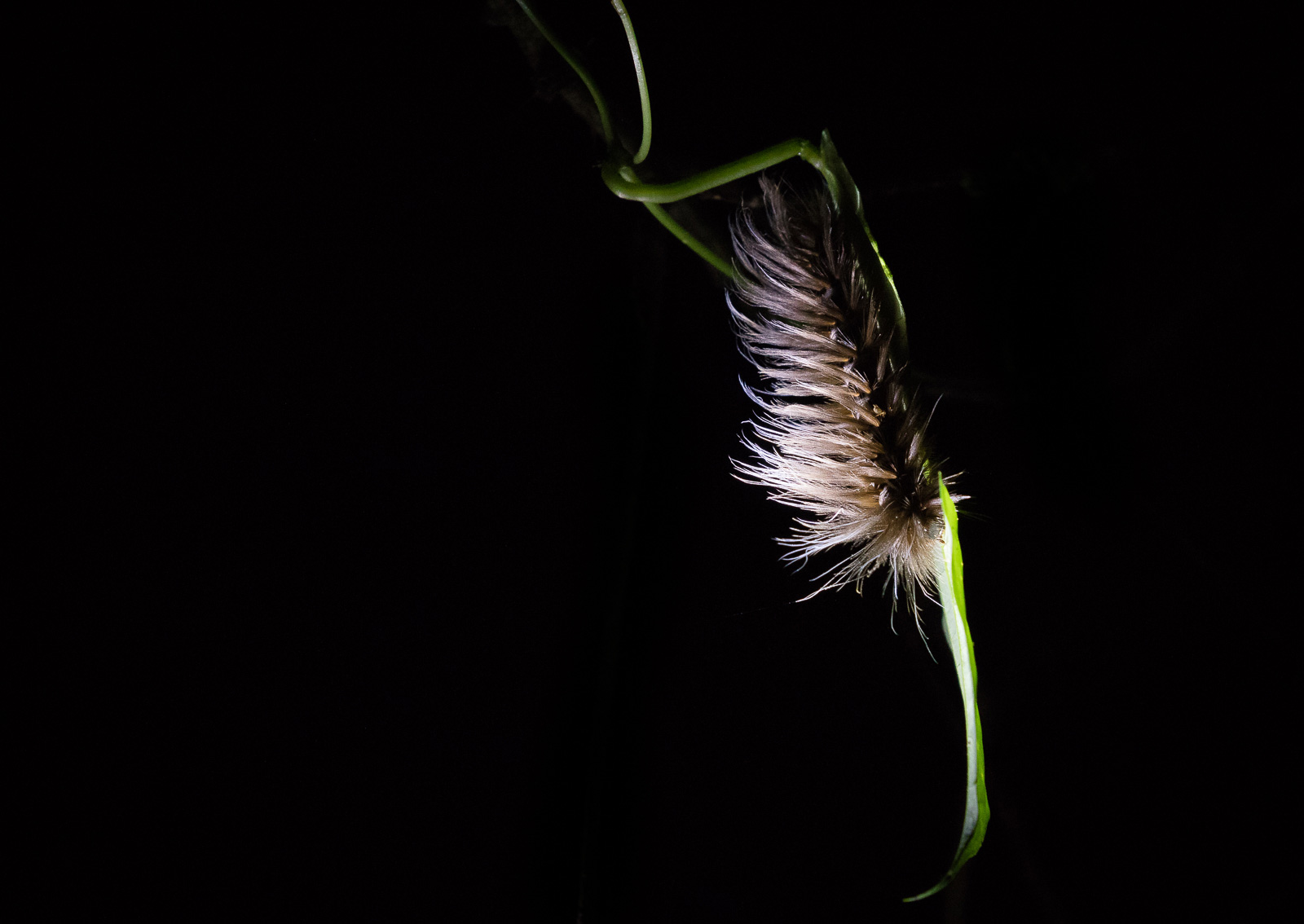 Kibale Forest comes alive at night. We did a guided night walk, looking for the creatures of the forest that emerge in the dark. This unknown caterpillar proved to be a great subject. I managed to capture this unique photograph with the help and advice of Albie Venter. 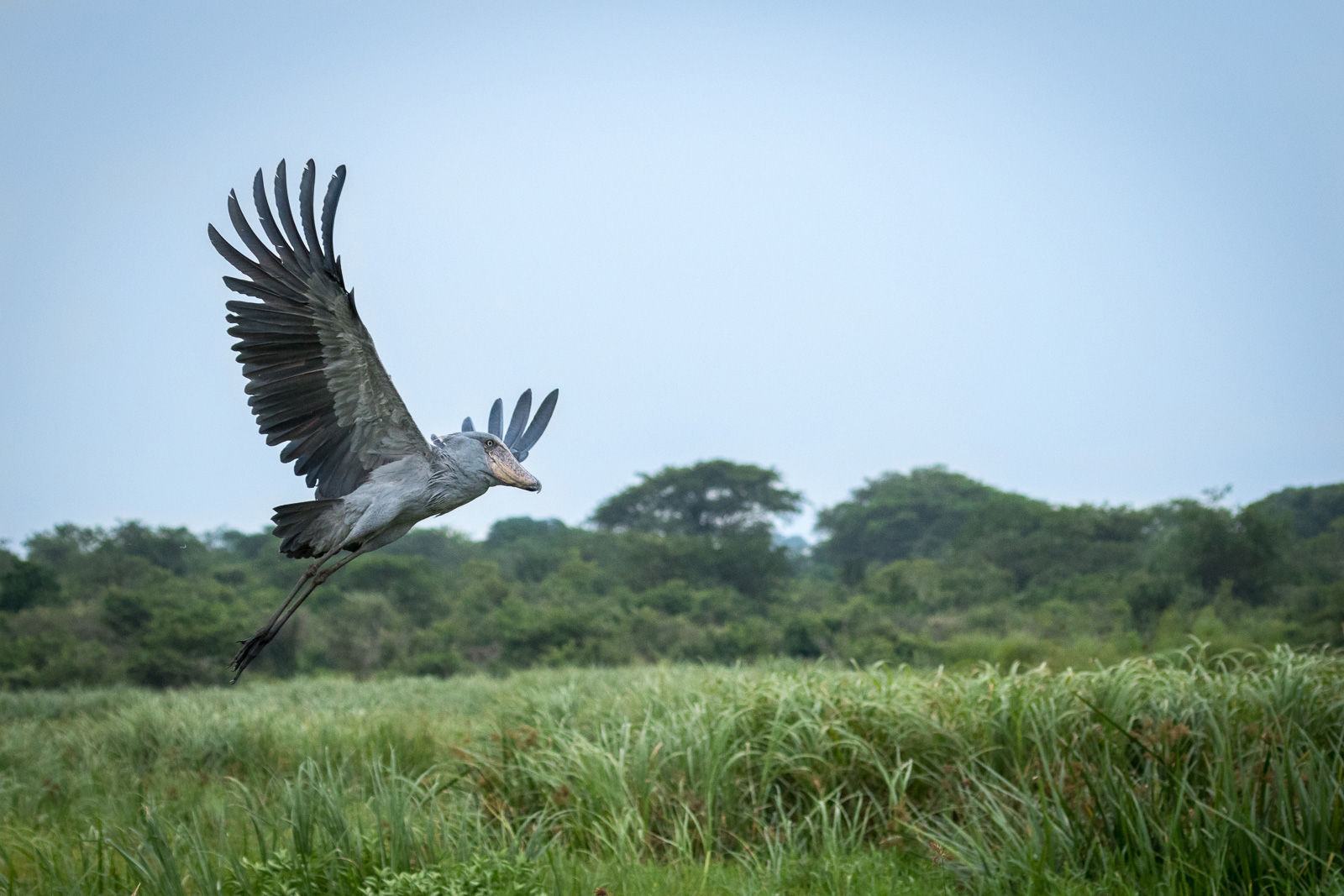 📷 An African shoebill takes off from Lake Albert. ©Chris Renshaw

A meandering and lush delta is formed where the Nile River enters Lake Albert. This is home to the enigmatic and extremely rare African shoebill. We spent many hours trying to find one that I could photograph, and after expert boat navigation from our captain, I captured a series of great photographs, ending with this image of the bird taking flight. 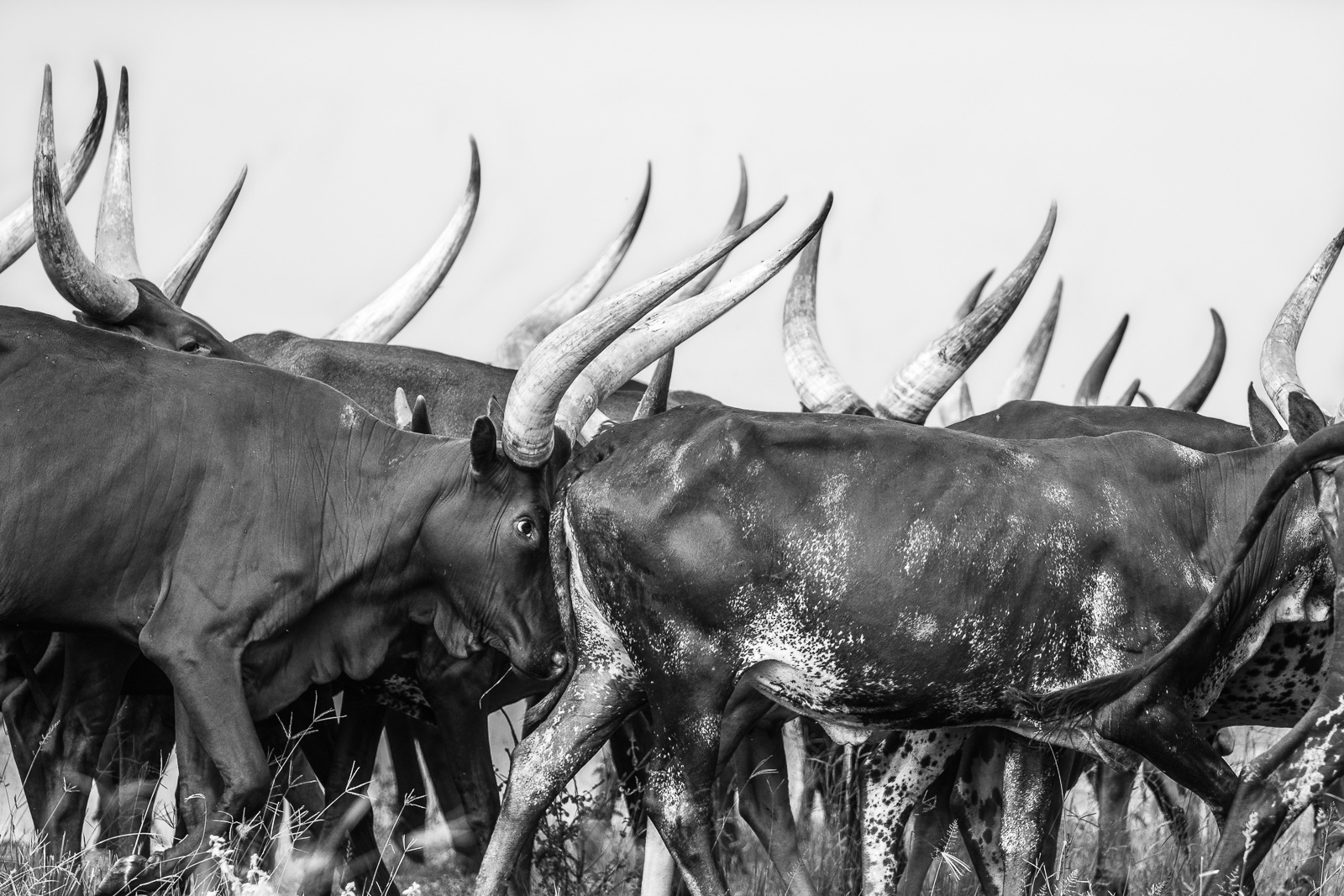 📷 Ankole-Watusi cattle are renowned for their incredible horns. ©Chris Renshaw

We were driving from Kibale to Bwindi on a deserted and random Ugandan road when I saw a small boy leading some giant beasts through a thicket. These were Ankole-Watusi cattle, otherwise known as Angolan long-horned cattle. I had to stop and capture the moment, as the opportunity to photograph these impressive animals does not come often. 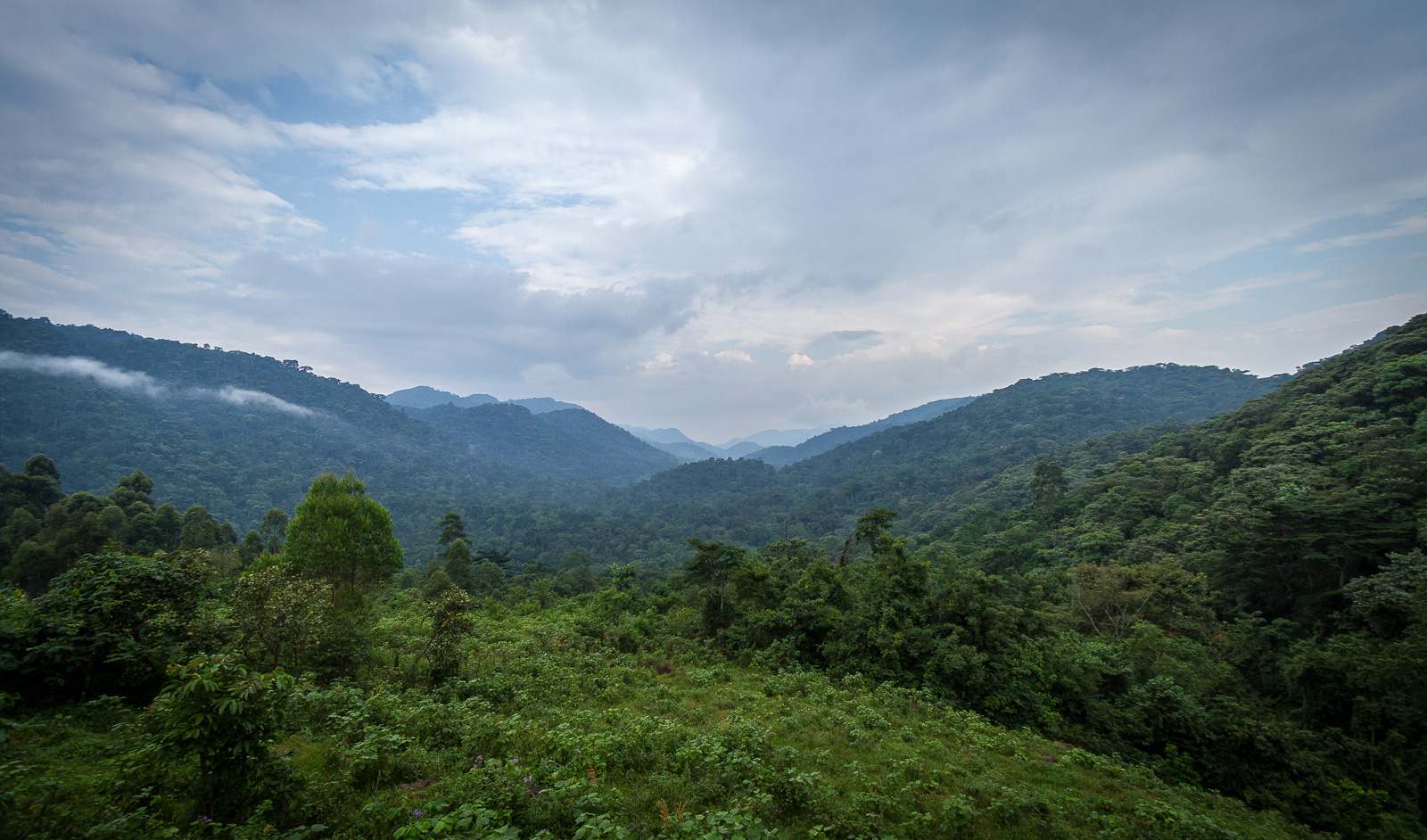 On arrival at Bwindi, we did a little exploring around the lodge that we were staying in. I found an open area looking down into the incredible maze of trees and growth covering the hills. My heart was bursting with excitement at the thought of hiking through it the next day to find mountain gorillas. 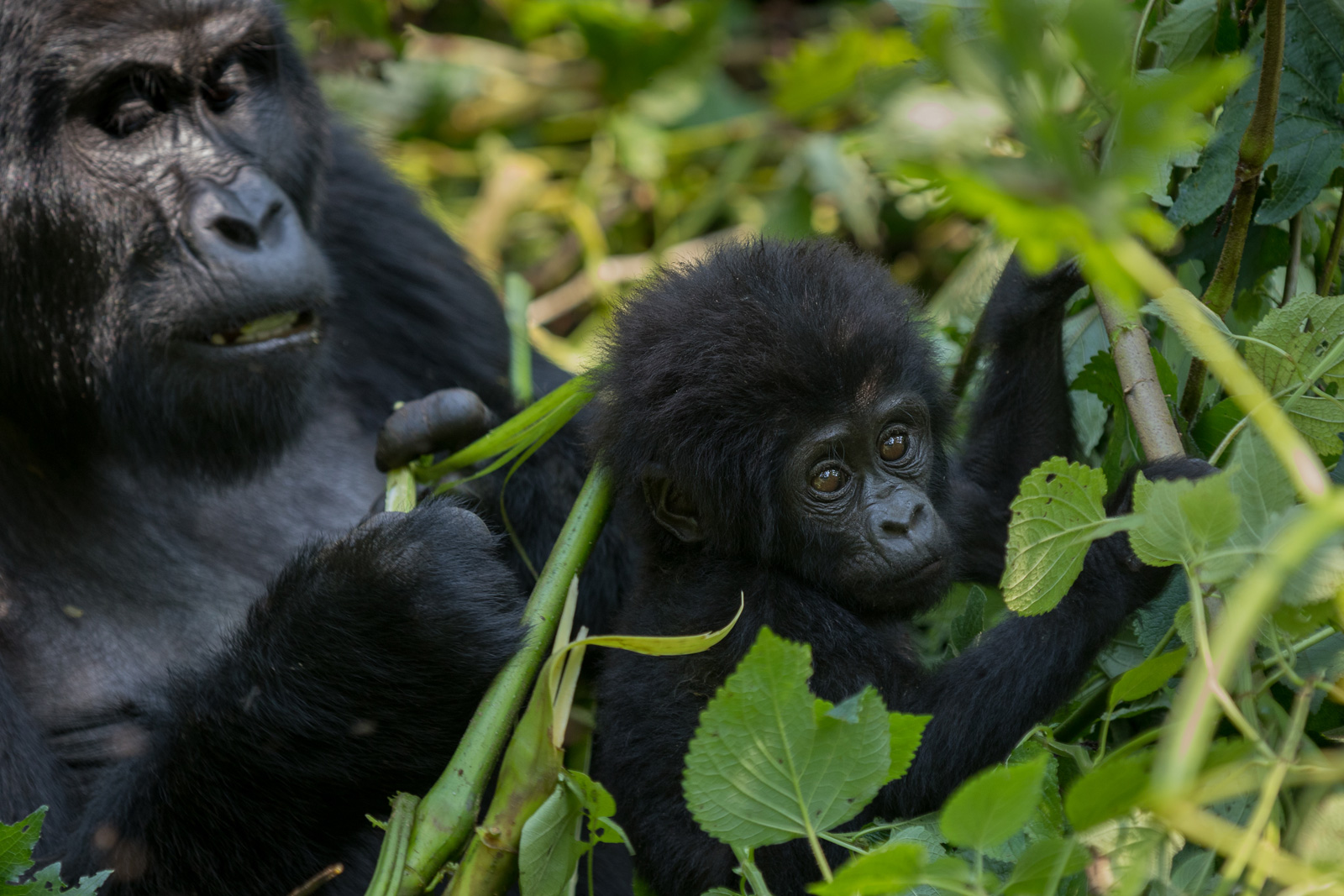 After hiking for two hours in the magical Bwindi forest, we were rewarded with a life-changing experience: a family of mountain gorillas going about their daily routine. Here, a mother grooms her young infant. We were extremely fortunate to spend time with a family group that had four different infants of various ages in it, as well as a massive silverback. 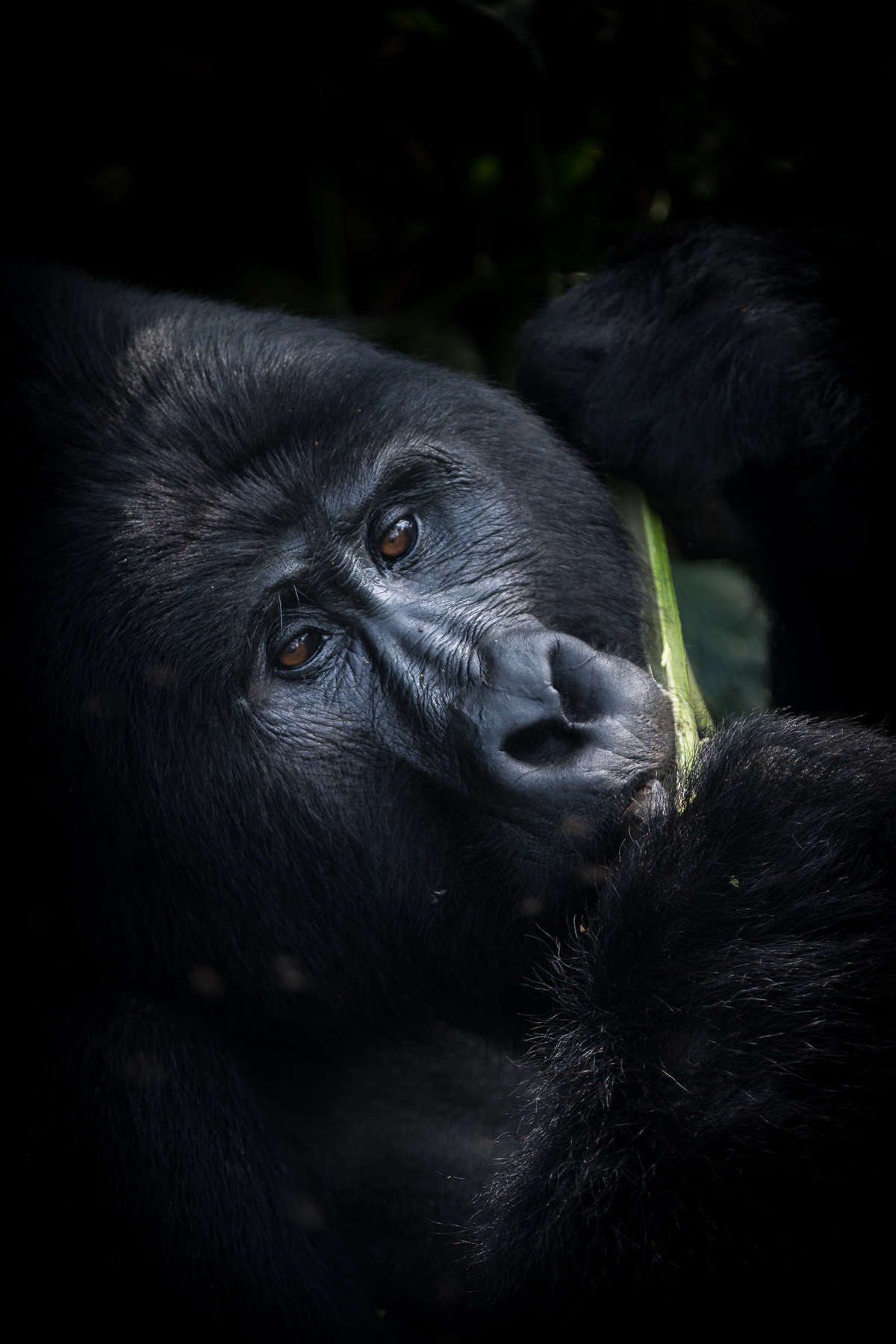 One cannot imagine the size, strength and formidable presence that a fully grown silverback mountain gorilla exudes. The last twenty minutes of our gorilla interaction was spent watching this dominant male. A truly memorable experience. 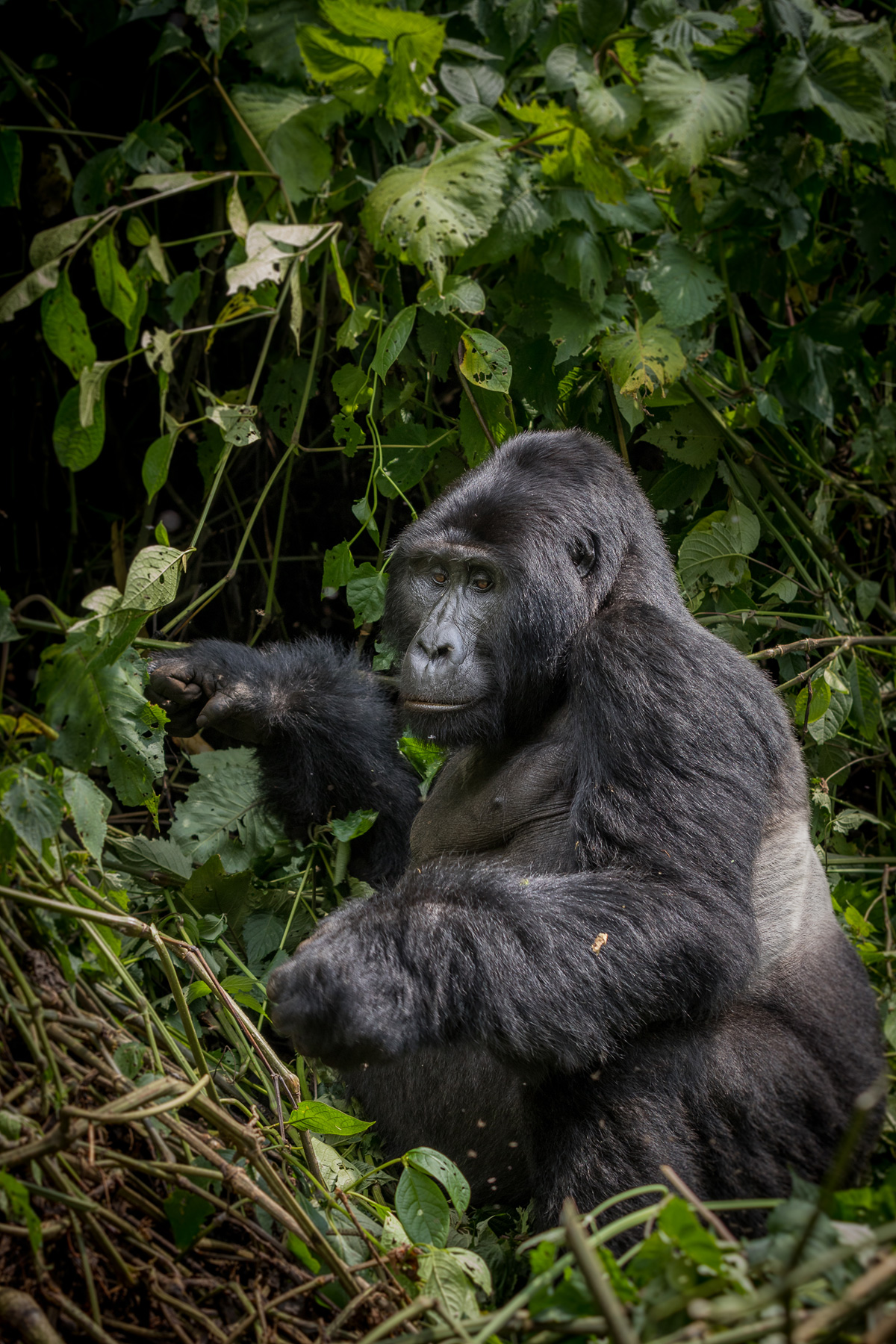 Realising that my hour with the gorilla group was coming to an end, I tried to position myself to get a full-frame image of the dominant silverback. I wanted to show the sheer size and strength of this leader of apes. 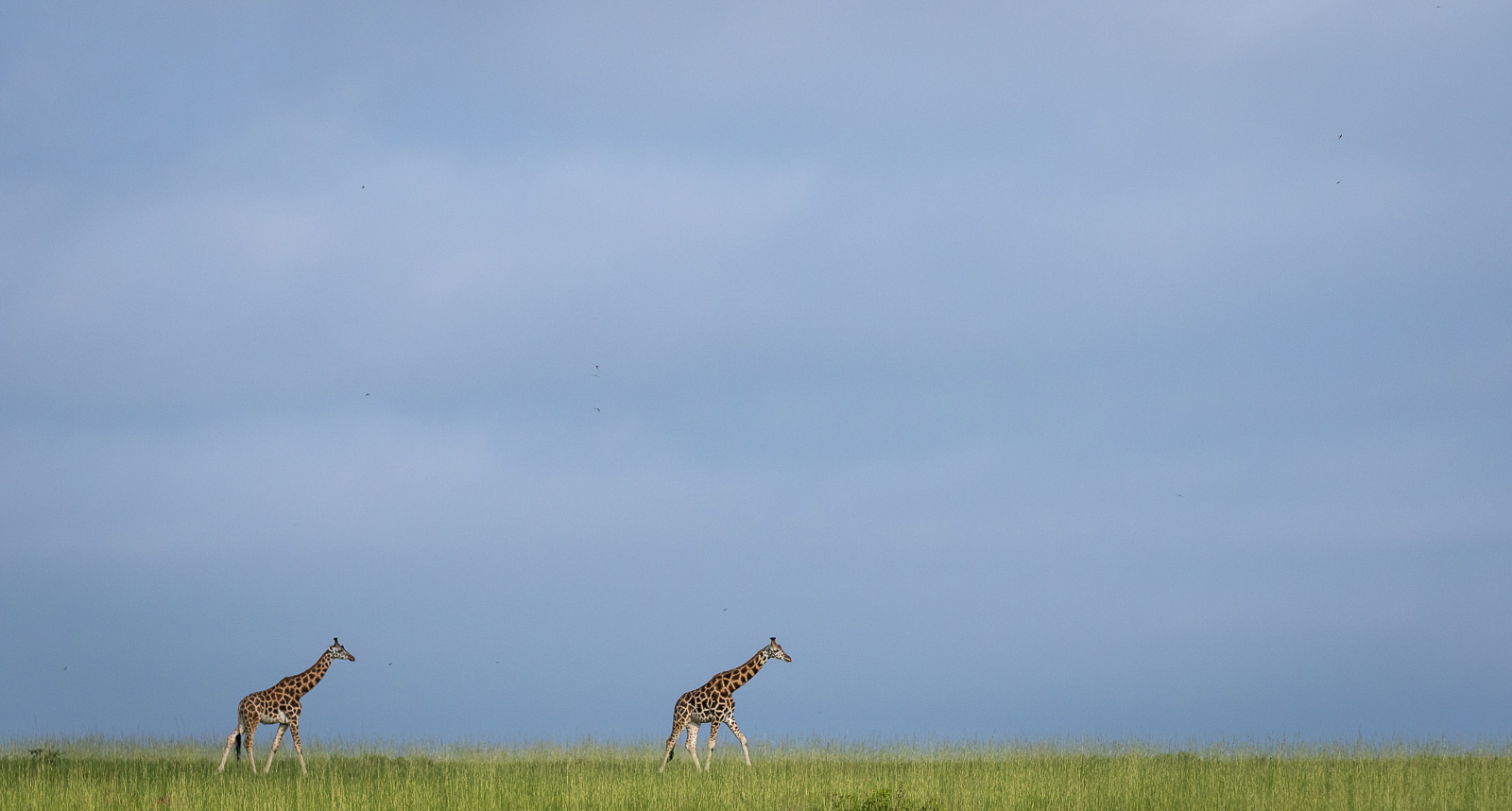 A tower of Rothchild’s giraffes walking serenely along a grassy ridgeline in Murchison Falls National Park. A unique sub-species, one that I have always dreamed of seeing. 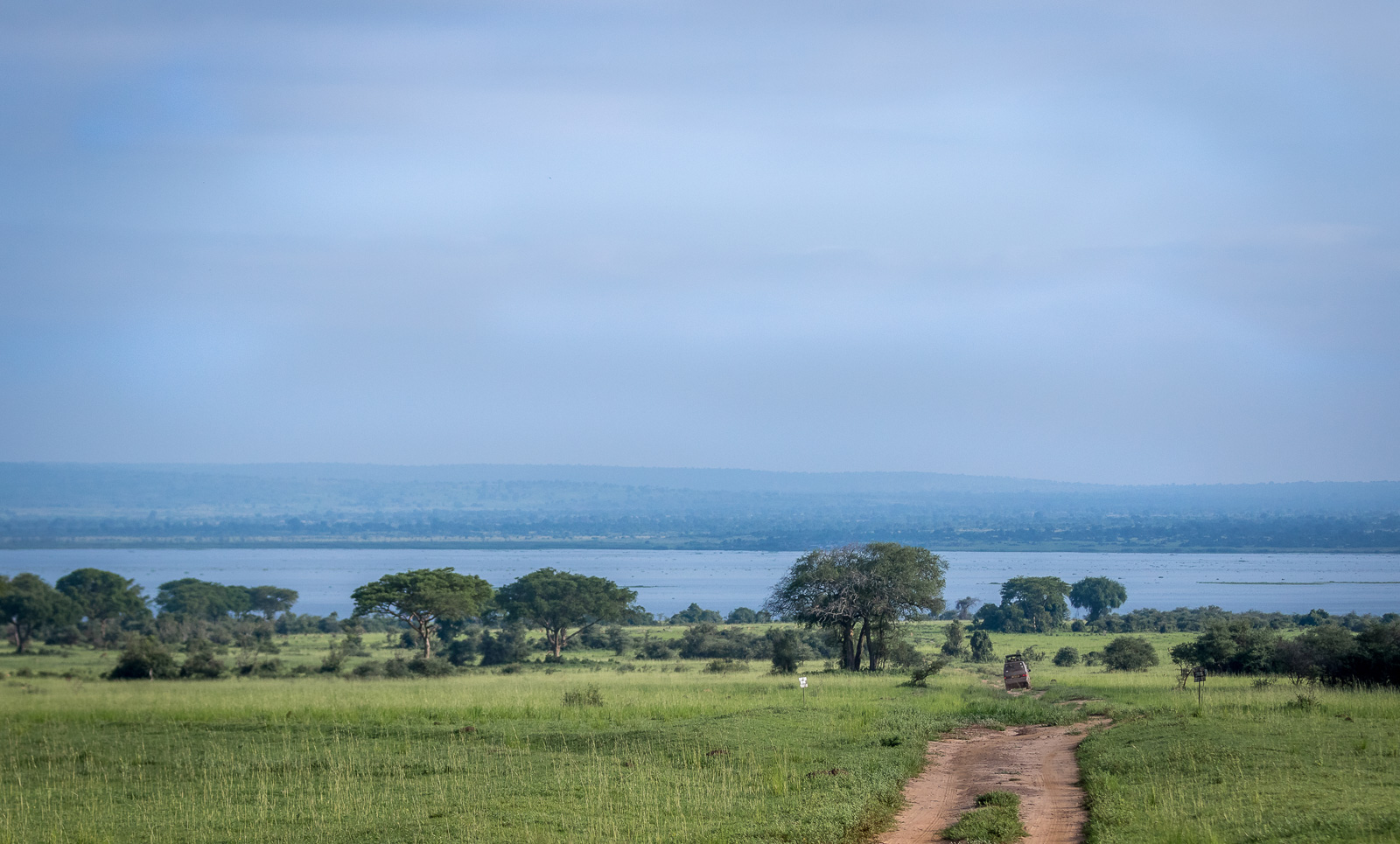 On a quest for a lion pride, we set off for the banks of Lake Albert. A pride had been seen there in the morning, and we were heading to their last position. A few other vehicles had the same idea, and as we trundled down a two-track, it lead us to this magnificent view of Lake Albert. We had to stop and drink in the scene that lay before us. 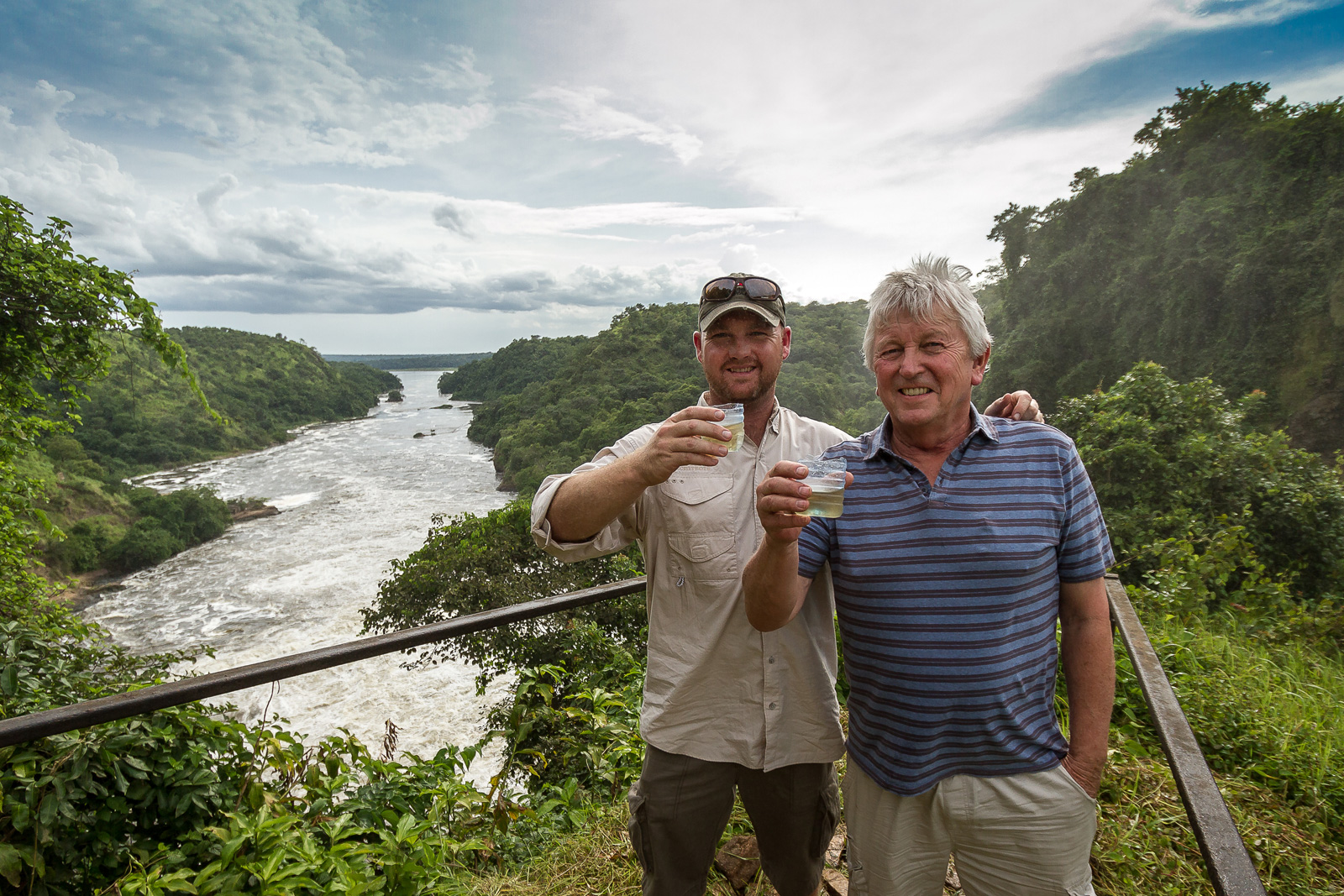 📷 The photographer and his father celebrate at Murchison Falls. ©Chris Renshaw

My father’s love affair with the Nile River began and ended at Murchison Falls. Having missed the opportunity to see the falls in 1969 on his epic hitchhiking journey through Africa due to illness, it was befitting that on his 69th birthday, we were able to toast to a journey completed. Read more about his 1969 journey here. 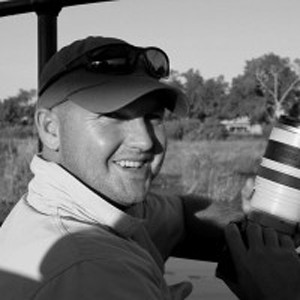 Chris Renshaw’s love for anything wild and adventurous came from a deep-rooted attachment to the African continent. It all started with a mother who was brought up in Kenya, and a father who hitchhiked from London to Johannesburg. Chris picked up where his parents left off, adding many adventures and forays into the African bushveld, ultimately leading to a Masters degree in Zoology and the fulfilment of his lifelong dream of becoming a wildlife guide.