Posted on February 9, 2021 by teamAG in the News Desk post series.
ShareTweetPinEmailShareShareLinkedIn 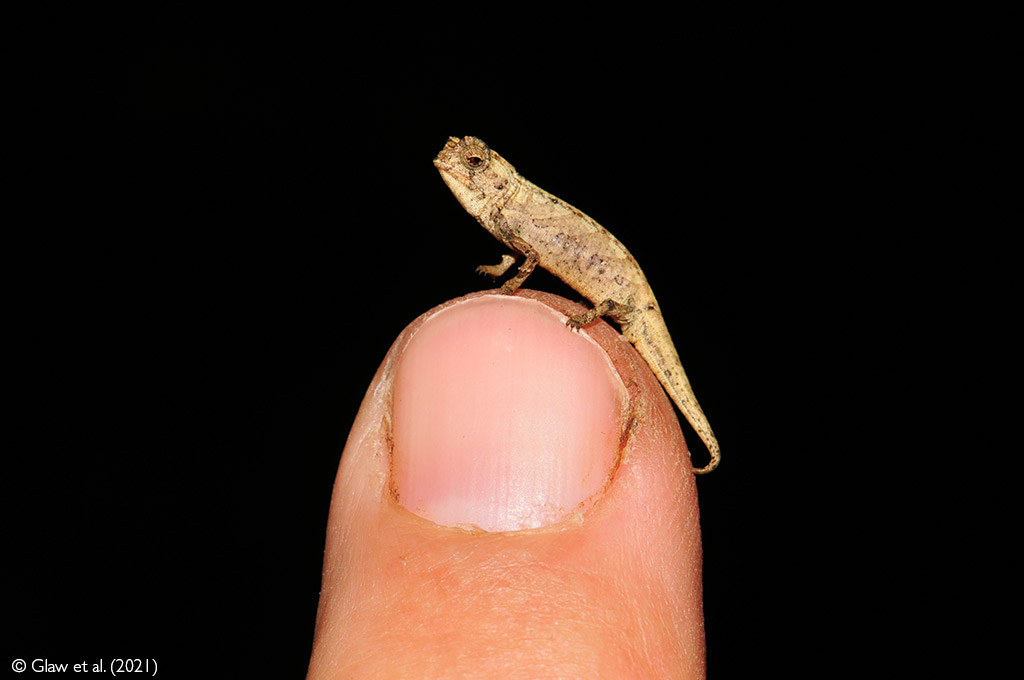 Scientists have discovered a new contender for the title of world’s smallest reptile: a minute Madagascan chameleon species that can balance comfortably on the tip of a finger. The newly described Brookesia nana male has a body length of just 13.5mm and overall length of 22mm (including the tail). It is the smallest known adult male reptile species. Astonishingly the male’s genitals make up 18.5% of its body length.

The tiny chameleon was discovered by a joint team of German and Malagasy scientists on an expedition to northern Madagascar in 2012. Extreme miniaturisation is relatively common in Madagascar, home to some of the smallest primates, frogs, and chameleons.

The B. nana specimens were collected in a degraded montane rainforest where they spend their days hunting for mites and springtails on the forest floor. At night, the chameleon hides on grass blades. Despite the scientists’ extensive efforts, the team could only find two specimens – a female and a male. The female is slightly larger, usually the case with smaller chameleon species.

One of the most critical tasks was to confirm whether the specimens were mature adults or juveniles. Micro-CT scans of the female revealed two developing eggs, confirming her maturity, but the process for the male was somewhat more complicated. As male chameleons mature, their reproductive structures, termed ‘hemipenes’, change, becoming more intricate. In this case, the male’s hemipenes were sufficiently well-developed for scientists to conclude that he had reached maturity.

The explanation behind the extraordinary size of male genitals most likely lies with the reversed sexual size dimorphism in smaller chameleons. The outsized hemipenes ensure a better mechanical fit during mating.

Of further interest to scientists is just how small complex vertebrates can get, as many of the tiny frog, gecko and chameleon species seem to converge around a similar size. The Brookesia genus (the Madagascan dwarf or leaf chameleons) all demonstrate similar reduction of particular body parts and a lack of head ornaments such as crests or cones. Though there are several theories, the reason the miniature chameleons of Brookesia are as small as they are remains a mystery.

Equally unknown at this point is just how many of the newly discovered B. nana chameleons exist in the wild and whether or not their populations are sustainable. Other members of the genus have a limited distribution, and all are threatened to some extent by habitat loss. While Madagascar is home to around half the world’s chameleon species, it is estimated that less than 10% of island’s forests remain. Of the Madagascan chameleons, 52% are threatened, and 70% are considered threatened or near-threatened. Fortunately, the tiny, new chameleons live in a newly proclaimed protected area ‘Resérve de Ressources Naturelles du Corridor Marojejy-Anjanaharibe Sud-Tsaratanàna partie Nord’, thankfully abbreviated to COMATSA Nord. However, the report recommends that B. nana be classified as ‘Critically Endangered’ on the IUCN Red List.

“Unfortunately, the habitat of the nano-chameleon is under heavy pressure from deforestation, but the area has recently been designated as a protected area, and hopefully that will enable this tiny new chameleon to survive,” says Oliver Hawlitschek from the Centrum für Naturkunde in Hamburg.