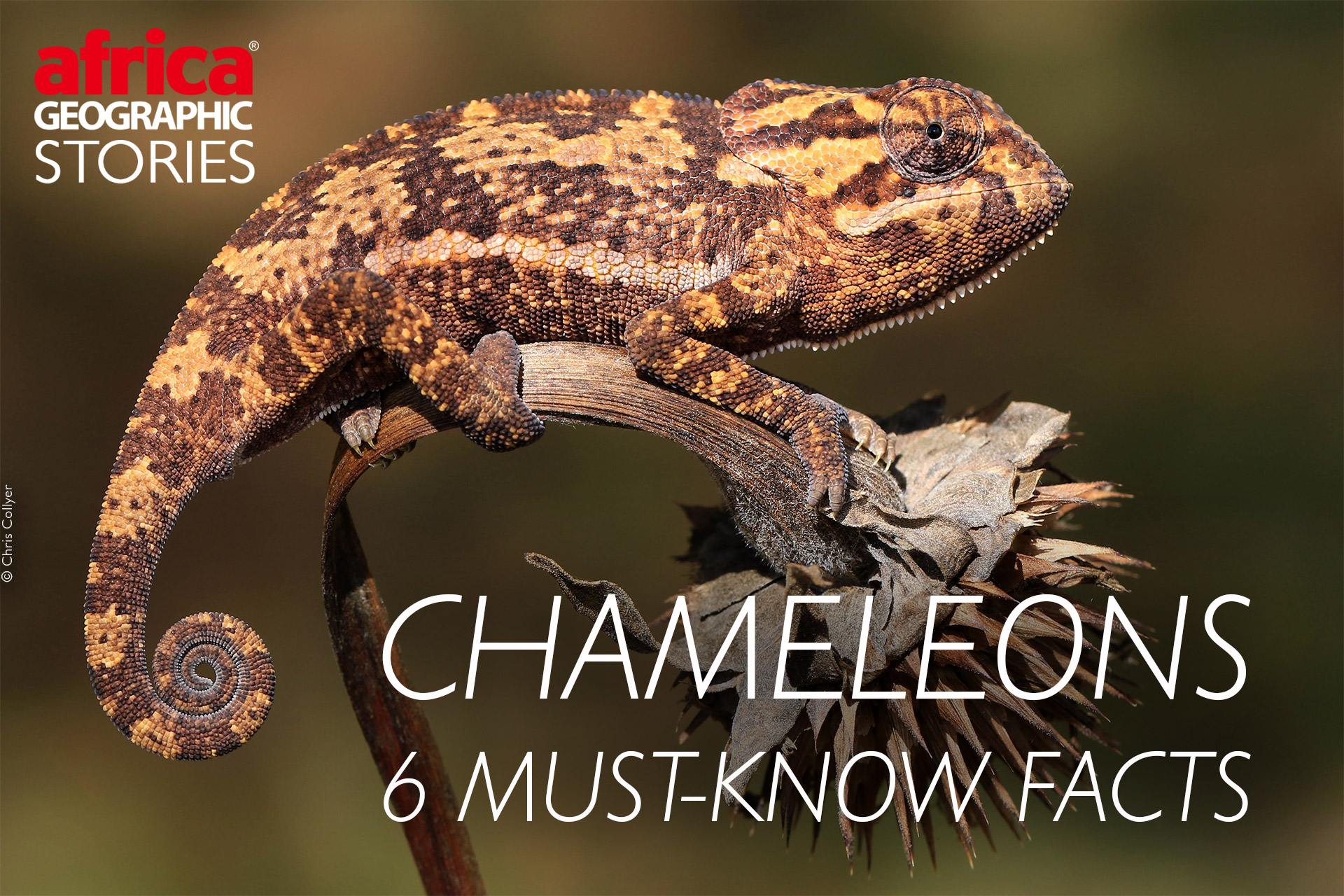 The chameleon, literally translated as “ground lion” from the ancient Greek, is one of the most unique reptiles on the planet. Throughout Africa and Asia, chameleons sport spiralled prehensile tails and odd, tong-like feet, as well as a wide decorative variety of horns and crests. The largest species, the Parson’s chameleon (Calumma pasonii) and Oustalet’s chameleon (Furcifer oustaleti) come close to the size and weight of a small house cat. In contrast, the smallest species, the dwarf leaf chameleon (Brookesia micra) can comfortably crouch on the head of a match.

Blending in and standing out

Their colour-changing ability is legendary, but the mechanism behind it is both intricate and fascinating and has only recently been fully explained. Unlike creatures such as octopi or squids that modify pigment dispersal within their skin cells, chameleons actively change the structure of their skin to modify which light waves are reflected. Underneath a top layer of pigment cells containing yellow and/or red pigments, specialized skin cells called iridophores contain crystals of a substance known as guanine (a nucleotide base). When the chameleon is relaxed, the crystals are tightly packed together, reflecting shorter light waves (blue light) that bounce back through the cells containing yellow pigments (xanthophores), making the chameleon appear (mostly) green. If a chameleon is stressed or excited, the cells containing the crystals “flex”, changing the layout of the crystals to reflect longer wavelengths, and creating the bright and expressive colour-changes. Below these layers of cells lie the melanophores which pump melanin pigments to the surface of the skin when a chameleon is submissive or frightened, making them appear brown or black.

Despite common misconception, this control over their skin cells doesn’t allow chameleons the ability to magically match the colour of their backgrounds. In fact, their being able to change skin colours has little to do with camouflage at all. Instead, it is a way for a chameleon to communicate with other chameleons and intimidate potential rivals or would-be predators. Changing their skin colour also has a vital thermoregulation function, especially for chameleons that inhabit extreme desert climates such as the Namaqua chameleon. A pale colour reflects heat, while a dark colour absorbs it.

Glow in the dark

As if chameleons weren’t other-worldly enough, there are some chameleons in Madagascar that have tubercles in their bones that fluoresce under ultraviolet light. When 31 species of Calumma chameleons were exposed to UV light, and in areas where bony protrusions around the face and crests lie close to the surface of the skin, the patterns of fluorescence were particularly striking. This fact was only recently discovered, and no one knows why it is that they do this. The most likely explanation is that it is an extension of their colour-changing abilities – a form of communication and a method of sexual selection, particularly since males have more tubercles than females.

Naturally, communicating through the fluorescence of UV light would be relatively useless if chameleons were not able to see ultraviolet light. Their vision is highly developed, and a chameleon is almost entirely visually-oriented – their eyes have an enormous independent range of motion, allowing them a panoramic view of the world around them. While their vision is monocular, research has shown that this is highly coordinated in itself, with a “tracking” eye that follows potential prey, and a “converging” eye that swings round to focus on it just before it launches an attack.

Unusually, chameleons have a negative (concave) lens, but their corneas are positive (convex), which allows them to focus their depth perception precisely. This also makes them the only vertebrate in the world that can focus monocularly, and they do not need both eyes to be looking at the same point to gauge depth.  So acute is their daylight vision that they have no rod cells at all, making them effectively blind at night.

Their vision has several different advantages, not least of which is that it allows the chameleon to fully assess the world around it with limited head movement. This helps them to avoid alerting prey, as well as avoiding the attentions of predators, as chameleons are popular snacks for snakes and birds alike.

The elastic recoil of a chameleon’s tongue propels them to accelerate the tongue to reach 100 km/hour in 1/100 of a second. This amounts to over 41 g, the highest acceleration of any reptile, bird, or mammal and over four times that of an F16 fighter jet. It can also extend to over double the length of the chameleon’s body. A modified hyoid bone has an extended entoglossal process, and the accelerator muscles are wrapped around this at rest. When these muscles contract, they squeeze structures known as intralingual sheets which shoot out like an unfolding telescope.

The tip of the tongue is covered in glands and acts like a suction-cup, with complex muscles contracting to fasten the edges around the prey. The power of this tongue allows the chameleons to catch prey up to a tenth of their body mass, which for the larger chameleon species can mean small birds.

Given that Madagascar is home to around half the world’s chameleon species, the natural assumption for a long time was that they had evolved there and then spread throughout the rest of Africa and into Asia. However, recent evidence suggests that chameleons came from mainland Africa. One of the oldest chameleon fossils ever recovered was found on Rusinga Island in Kenya. The fossil is believed to be from a species that lived 18 million years ago. Upon analysis, researchers confirmed that it belonged to the same genus as chameleons found only in Madagascar. Evidence shows that ocean currents at the time (between 50 to 15 million years ago) moved towards Madagascar, making it more likely that chameleon ancestors rafted from mainland Africa. Interestingly other endemic Malagasy animals such as the aye-aye are believed to have similar origins.

A crisis of conservation

The exact number of chameleon species in Africa is unknown, as new species are being discovered regularly, particularly in forested areas. There are, however, believed to be around over 210 species throughout the world and the SSC Chameleon Specialist Group have found that over a third of these species are threatened with extinction. Madagascar, in particular, is home to around half the world’s chameleon species, including typical chameleons (Chamaeleoninae) and dwarf chameleons (Brookesiinae). Of the Madagascar chameleons, 52% are threatened, and 70% are considered threatened or near-threatened. Nineteen of these species are endangered, and four are critically endangered: the Belalanda chameleon (Furcifer belalandaensis), the Namoroka leaf chameleon (Brookesia bonsi), the bizarre-nosed chameleon (Calumma hafahafa), Tarzan chameleon (Calumma tarzan) and the Ambre Forest stub-tailed chameleon (Brookesia desperata).

Throughout Africa, there are another six species of chameleon listed as critically endangered and the Chapman’s pygmy chameleon, endemic to its forest home in Malawi, has not been seen in over 25 years. Chameleons are slow-moving and range-restricted, meaning that they, like many other reptile species, face tremendous pressure through habitat loss. The precious and unique endemic species stand little chance against the tide of human expansion without urgent protection of their habitats.

In many African belief systems, the unfortunate chameleon is considered to be something of a bad omen. However, far from being a harbinger of disaster, chameleons are innocuous, inoffensive reptiles with many captivating features.

Further reading: Where have all the chameleons gone?