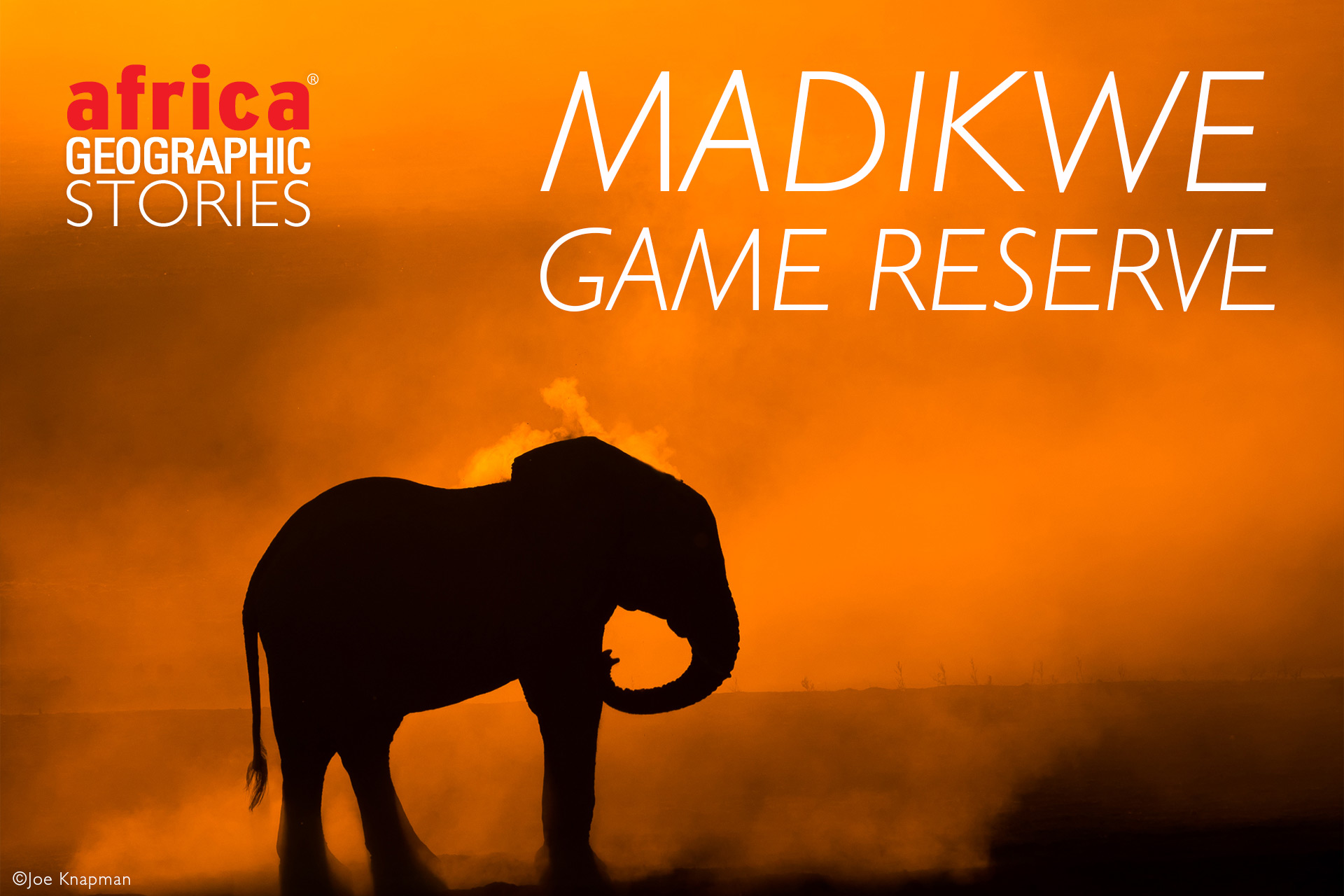 Just over three decades ago, a tract of land stretched across the corner of the North-West province of South Africa – a brown and dusty mosaic of degraded cattle farms devoid of almost all life. The transformation of this landscape to today’s thriving Madikwe Game Reserve, though not without its challenges, is one of South Africa’s conservation success stories.

The story of Madikwe Game Reserve is one that runs counter to that of most protected wild spaces in that its beauty and biodiversity potential were realised only after the fact. The decision to proclaim the reserve was made for socioeconomic reasons – a conscious conclusion that ecotourism would bring more value to the community than farming. And so, conservationists were faced with a vastly different task. Rather than protecting what was already there, they had to restore what once was.

The result is a thriving conservation model that has worked to benefit not only wildlife but the local communities as well while providing one of the premier safari destinations in South Africa. 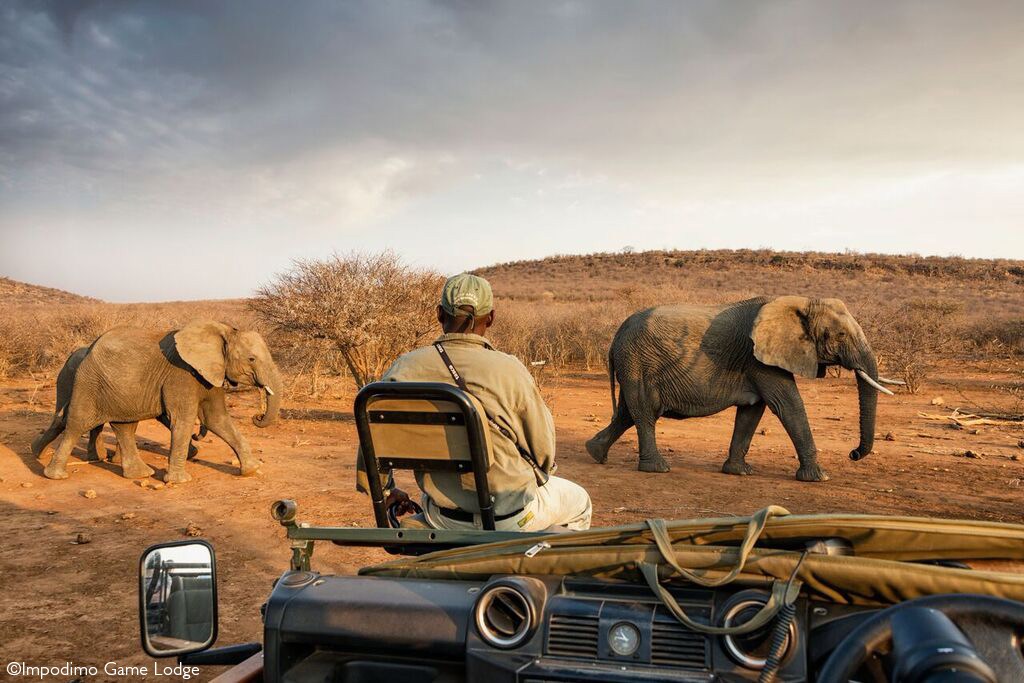 Madikwe Game Reserve lies just south of South Africa’s border with Botswana only 40km from Gaborone and extends across 750km2 (75,000 hectares) including recently incorporated private land, making it the fifth-largest game reserve in South Africa. The reserve occupies a transition zone between Kalahari thornveld and savanna bushveld and is topographically varied and fascinating. The region’s woodlands and plains are broken by volcanic inselbergs, while the Groot Marico River (which is also known as the Madikwe River) adds riverine habitat along the eastern portion of the reserve, and the Dwarsberg Mountains dominate the southern skyline. 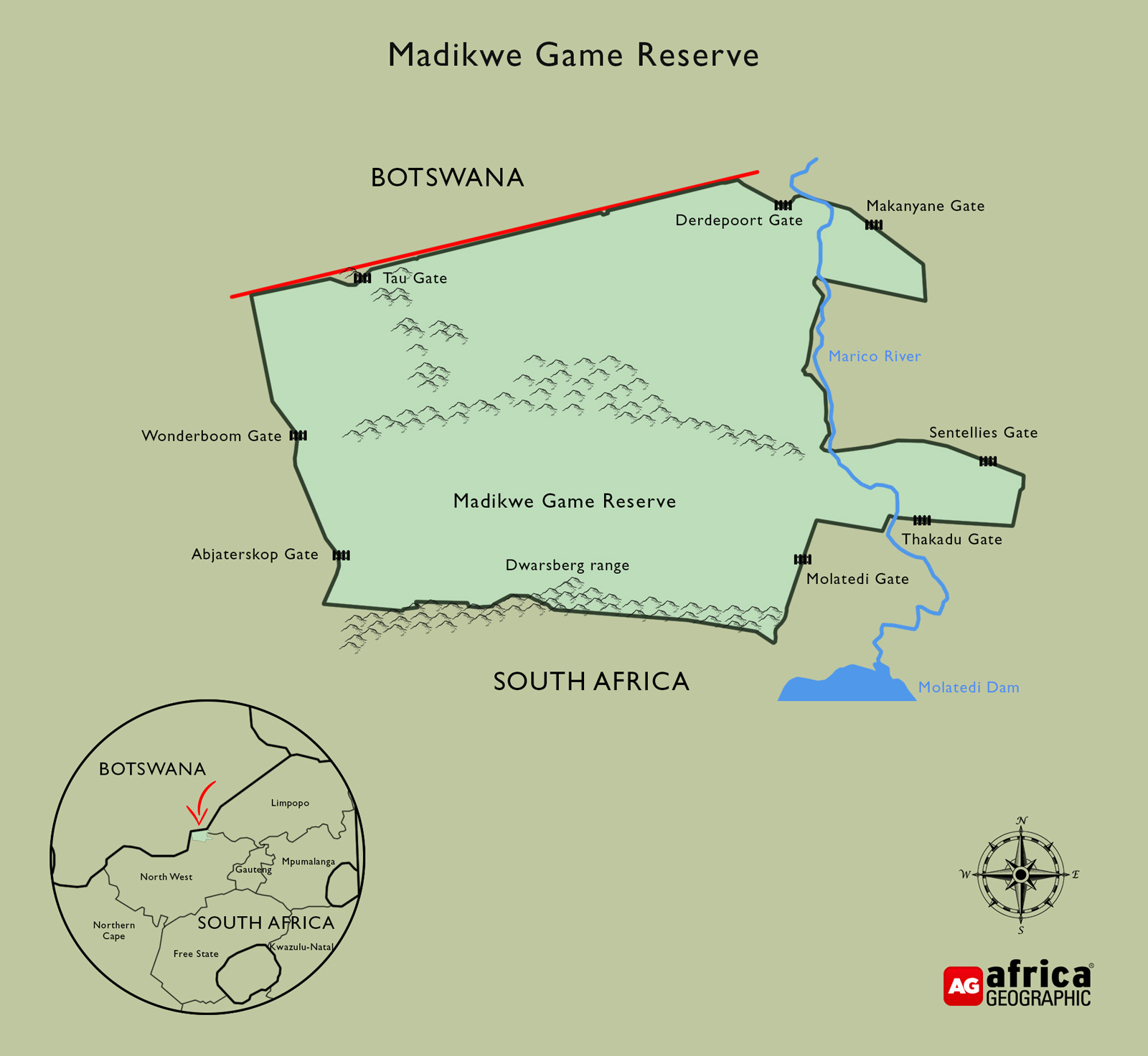 By the later part of the 20th century, it became clear that poor farming practices combined with an arid climate and degraded soils had made the area almost entirely unsuitable for either crop or livestock farming. Faced with decisions as to what to do with the land, the Settlement Planning Services of the Government of South Africa commissioned and conducted a comprehensive study into the most efficient form of land use and how it could be used to benefit the communities of the area. They concluded that wildlife-based ecotourism would be the most economically sound use of the land.

In many ways, this practical and financial conclusion came to underlie the fundamental tenant that has made the Madikwe model so unique (and successful): people first.

There is no doubt that the colonial “snatch-and-grab” approach has played a significant role in the history of many protected areas throughout Africa and, as a result, the needs and opinions of local communities surrounding them have been sorely neglected or ignored. In many cases, wildlife reserves and national parks have prospered without their immediate neighbours benefitting in any way. As a general rule, the mere existence of these people near or amongst wild animals has been viewed as working in opposition to the overall goals of conservation – to the extent that keeping local people and wildlife separated was seen as essential to ensuring the survival of biodiversity. A gradual shift in mindset has resulted in a growing awareness that the fortunes of both protected areas and their human populations are irrevocably linked. In the case of Madikwe, somewhat unusually, this value system was inculcated from the start.

Upon its inception, Madikwe Game Reserve was described as a partnership between three main stakeholders: North West Parks and Tourism Board (initially the Bophuthatswana Parks Board), the private sector, and local communities. The underlying strategy is that local communities should benefit through employment, business opportunities and a share of the game reserve profits that should be directed at community development projects.

While the foundations of Madikwe were built upon the people-first approach, the success of tourism-based land use depended on the successful transformation of barren farmland to a game reserve. This process began with the gradual restoration of soil and plant life but also required the reintroduction of almost every large mammal species currently seen in the reserve. The translocation of wildlife to the reserve began in 1991 in an undertaking known colloquially as ‘Operation Phoenix’. During the next seven years, nearly 10,000 animals ranging from antelope to predators and rhinos to elephants were relocated to Madikwe in what was, at the time, the largest ever wildlife relocation project of its kind.

Risen from the dust

The success of Operation Phoenix is seen in Madikwe’s thriving wildlife population: the reserve now supports the second largest elephant population in the country. The magic of Madikwe lies its variety of available ecosystems and its prime position between the Kalahari and Lowveld habitats. For visitors to the reserve, the safari is about more than merely seeing the Big 5 – painted wolves (African wild dogs), cheetahs, brown hyenas and sable and tsessebe antelopes are all significant drawcards that keep visitors returning year after year. Despite a series of natural challenges including a rabies outbreak, Madikwe’s painted wolf population has thrived since their introduction in 1994 and the region is renowned for spoiling excited tourists to spectacular sightings of these energetic and endangered predators. 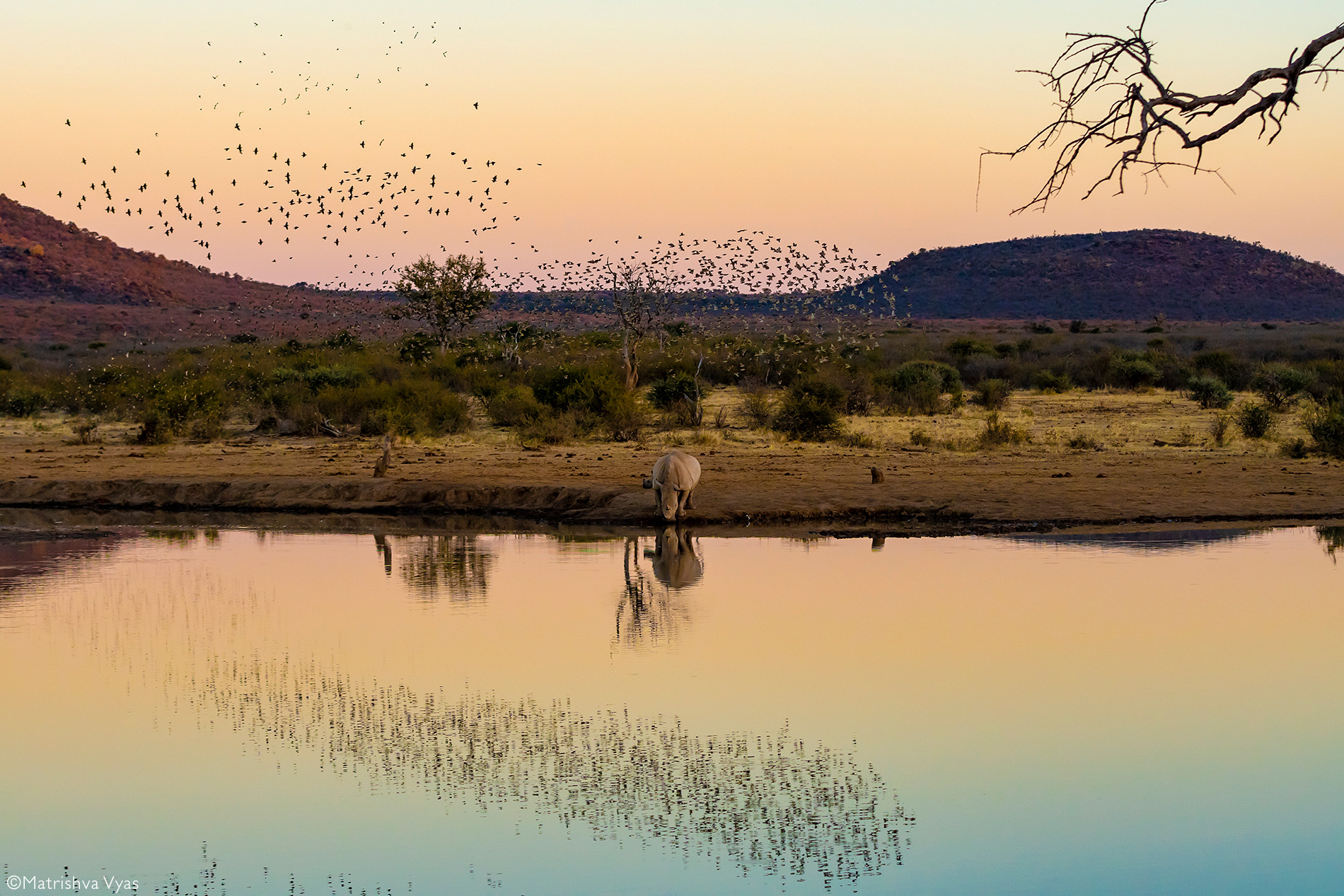 The inevitable consequence of the success of the elephant population growth is the question of what to do next. While historically the region may well have been home to just as many elephants, they would have been free to move and migrate according to the seasons, rainfall, and available vegetation. For many years, the state, management teams and conservationists have been working on creating a corridor system that would follow ancient migratory routes between Madikwe and Pilanesberg National Park – a distance of just 75km in a straight line. If this goal is ever realised, it would create an enormous, connected wilderness area of 3,000km2 (300,000 hectares) and form part of the proposed Segarona Heritage Experience. 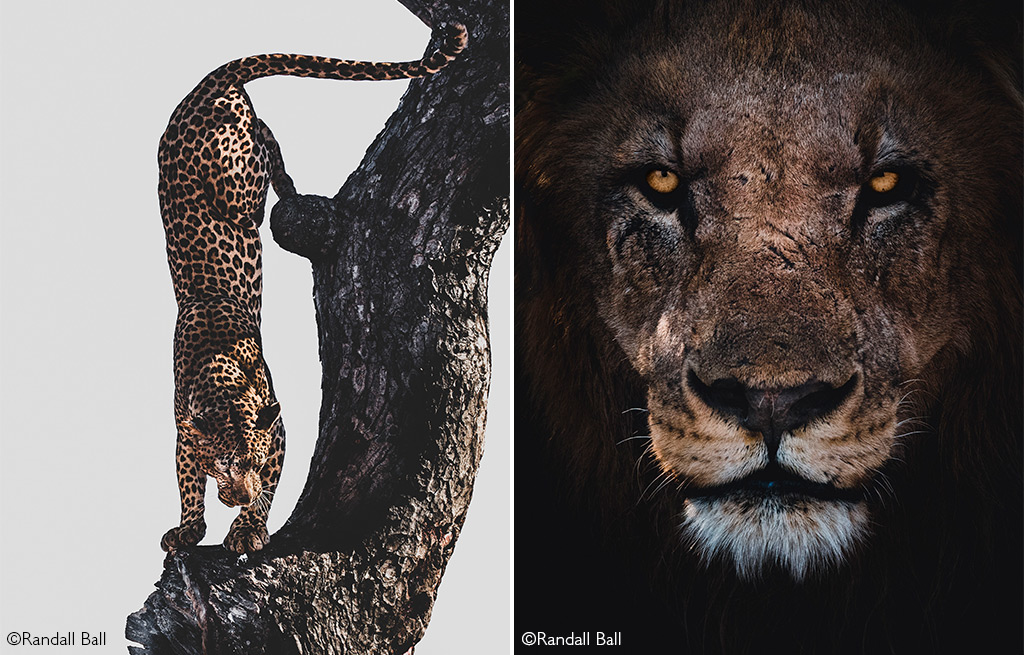 Want to plan your Madikwe safari? Scroll down to the end of this story to research and get in touch with our travel team to start the discussion.

The creation of this corridor is likely to be many years in the making, and for now, Madikwe remains a wilderness oasis offering some of the best safari experiences in the country. Unlike South Africa’s national parks, day-visitors are not allowed into Madikwe and access to the reserve will on be granted on booking accommodation in the reserve, making the entire experience a genuinely exclusive one. From the back of a vehicle to the back of a horse, this exclusivity translates to a far more personal safari experience. There is a range of camps and lodges to choose some, from high-end luxury to family or budget-friendly options, and, importantly, community-owned and run lodges that see profits going directly to community members.

Unlike many of the South African Big 5 safari options, Madikwe is malaria-free, making it a suitable alternative for families travelling with young children. It is also easily accessible from Johannesburg. The game viewing is at its best during the winter months – the dry season – as the animal life congregates around the available water (often at lodges). For birders looking to spot a few of Madikwe’s 350 recorded species, the reverse is true, and the summer months offer the best birding and exquisite verdant scenery to accompany the experience. It is worth remembering that the reserve lies on the fringes of the Kalahari and winter nights can be somewhat chilly.

A Boy in the Wild 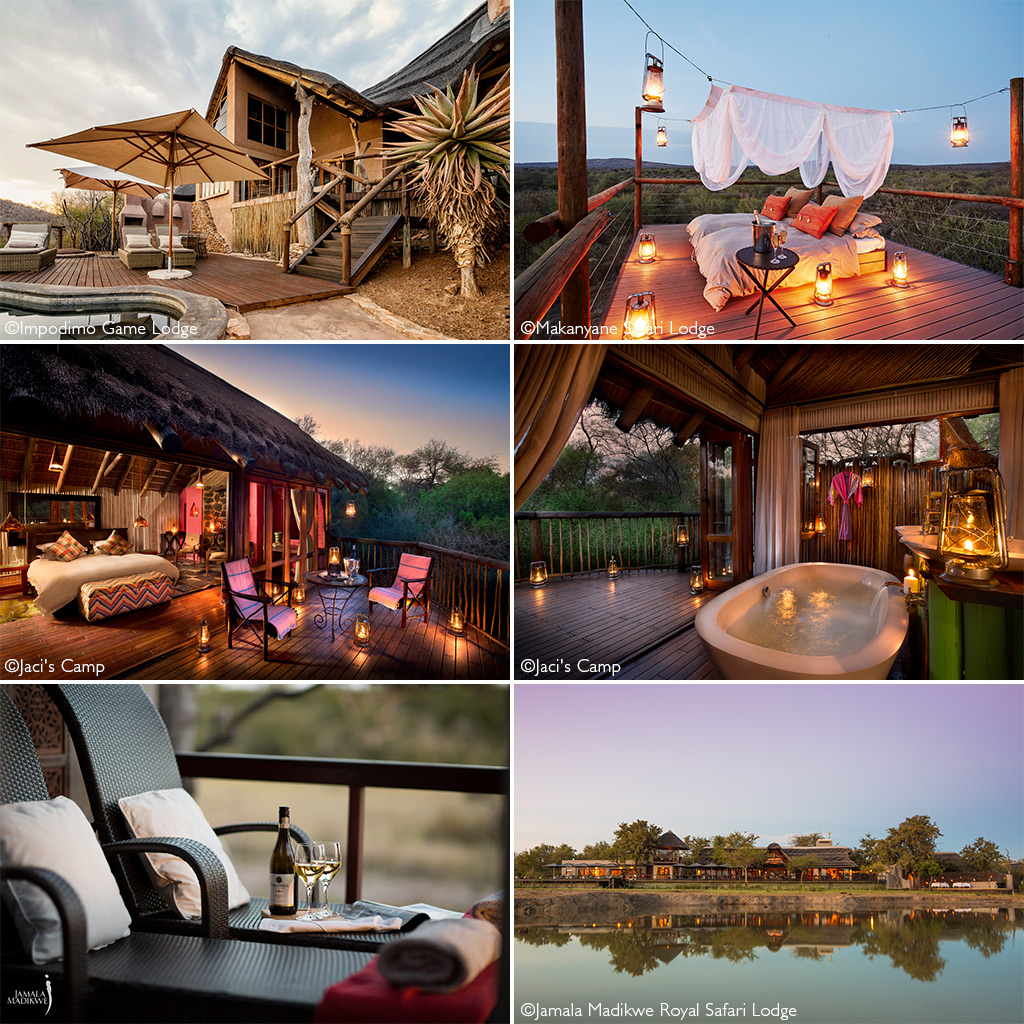