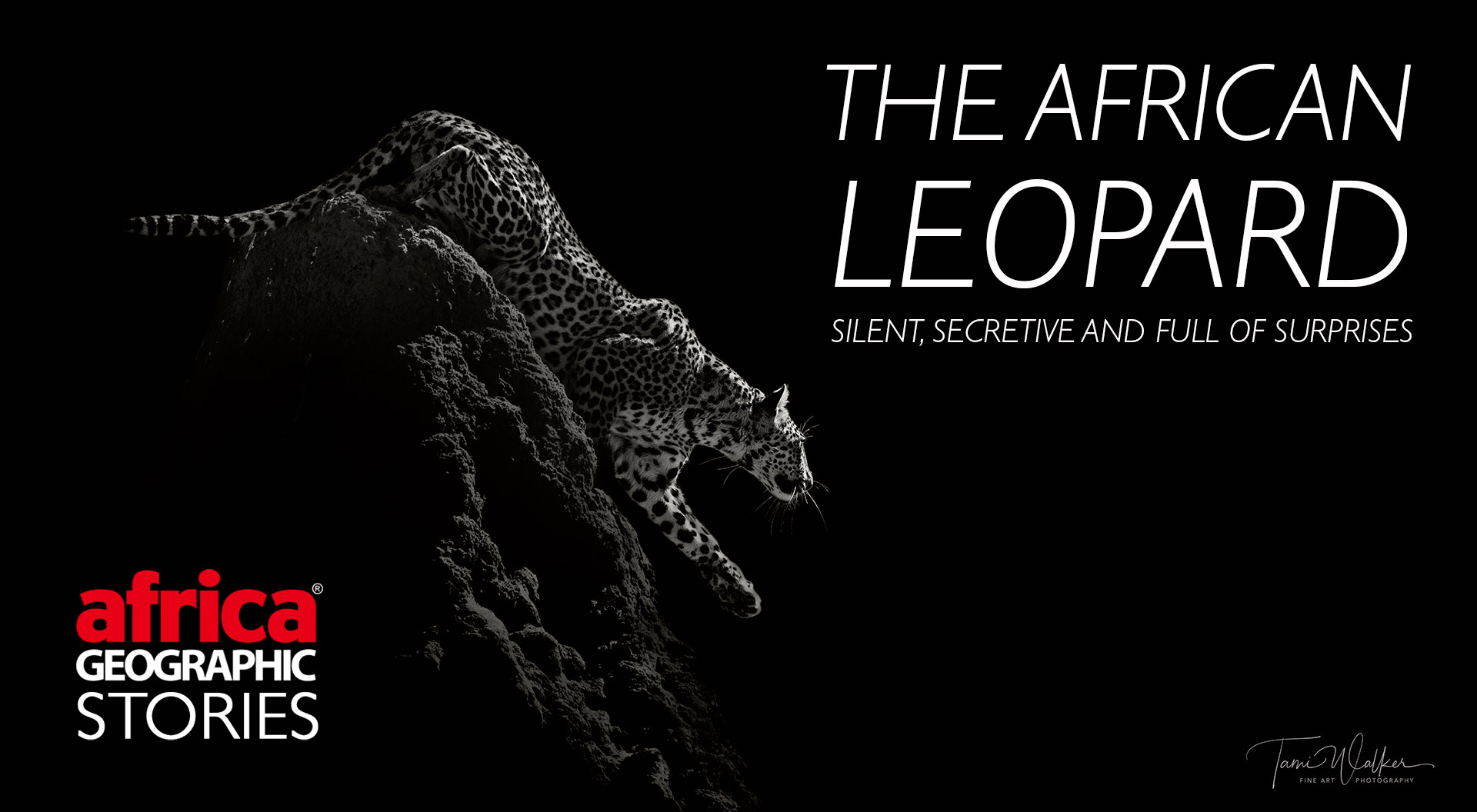 Of all Africa’s big cats, leopards are objectively the picture of perfection. Breathtakingly beautiful, charismatic, powerful, and mysterious, each leopard has its own pattern of rosettes and spots that are as individual and unique as their personalities. Their self-contained grace and nimble frames belie an extraordinary explosive strength and speed when needed and, like most cats, they have an innate ability to look entirely comfortable and at home wherever they happen to be at the time. This applies whether they are draped over the boughs of a marula tree or surveying the area from atop a termite mound, perhaps lounging in a sandy riverbed or, on the odd occasion, nestled in between the cushions of the couches on a lodge deck! Those who have spent time with leopards will tell you that every leopard sighting is unique – defined by the personality of the leopard itself.

The only truly predictable aspect of leopard behaviour is its unpredictability. 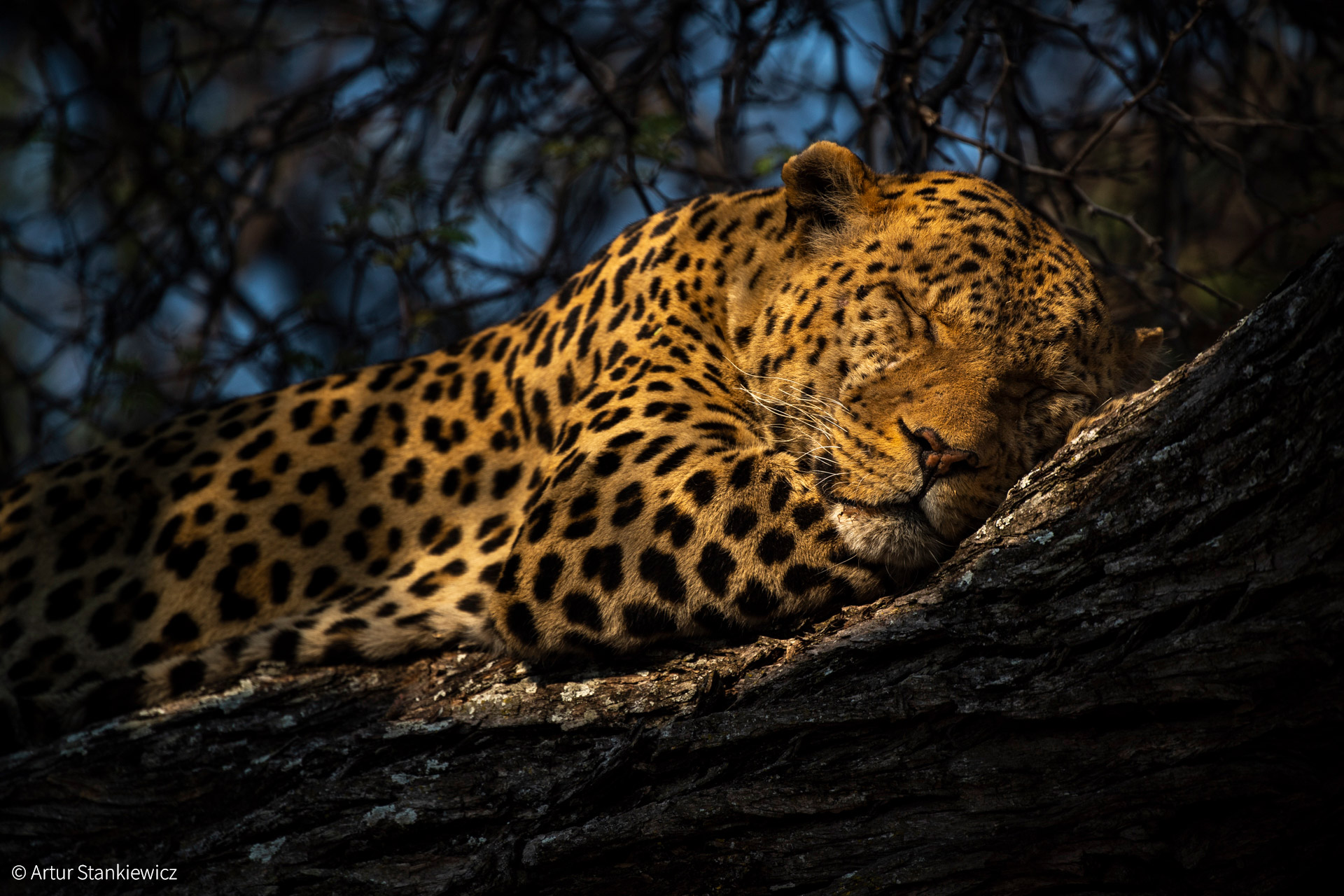 Leopards are by nature territorial and, in theory, solitary unless raising cubs, though it is not uncommon for young leopards to seek out the company of other leopards, driven by curiosity and youthful insouciance. Some territorial males even establish relatively tolerant relationships with the females in their immediate vicinity, though their meetings are usually based around an available meal! The territories of females tend to be smaller than those of the males and the males’ territories often encompass several female territories, allowing them to sire multiple litters of cubs. Female leopards are the genetic guardians of a region – once old enough, a female will most often establish a territory adjacent to that of her mother, with a minor degree of territorial shuffling as she reaches independence. Males, on the other hand, typically disperse at around 2.5-3 years of age in search of territory (and subsequent breeding rights) of their own and have been recorded moving hundreds of kilometres before establishing themselves. A male that moves into an area and takes over a territory will seek out and kill any existing offspring sired by the erstwhile territorial male; infanticide is one of the leading causes of cub mortality.

Most references to leopards describe them as nocturnal, and while it is undoubtedly true that they are often active at night, it is not uncommon to encounter a leopard moving or even hunting during the day, even in extreme temperatures. They are silent, efficient ambush predators and know exactly how to use their camouflage to best effect, often grabbing their prey before it registers what is happening. Their sheer strength allows them to catch and kill prey larger than themselves and they often stash these heavy carcasses in trees to avoid the attentions of other predators. 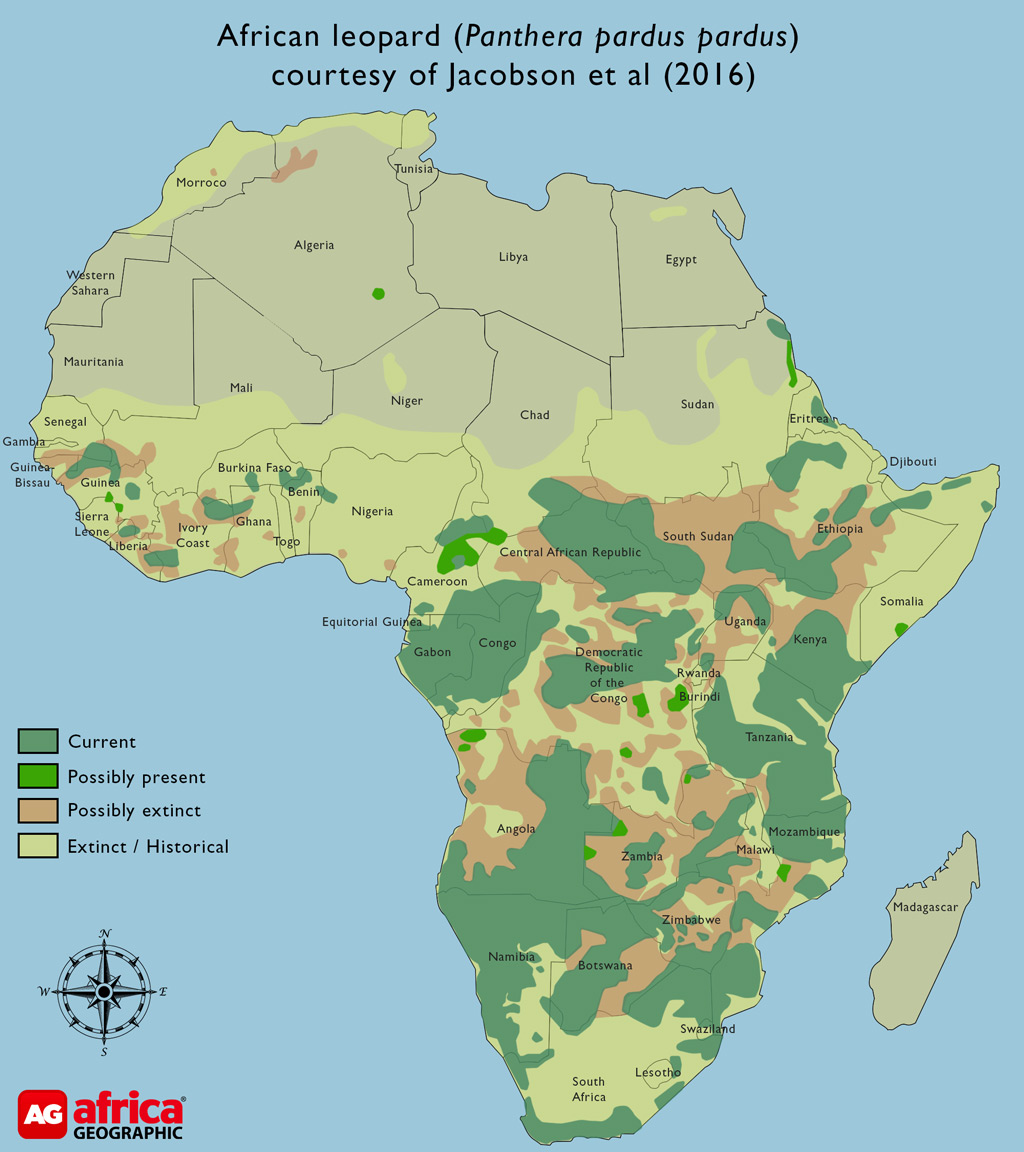 As consummate opportunists themselves, they will readily steal from other, smaller predators or munch on scavenged carcasses and there is little that a leopard will not eat. While statistically they target smaller to medium-sized ungulates (antelope such steenboks and duikers), this is highly area and individual dependent, and leopards have been recorded eating over 100 different species. These include termites, terrapins, beetles, catfish (watch), snakes, lizards, birds, porcupines, domestic pets, monkeys, warthogs, and hares. They have even been recorded raiding the nests of ground hornbills and martial eagles. As males can be double the size of the females, they tend to target larger prey on average and have been known to kill (and hoist) giraffe and buffalo calves. Considering that a giraffe calf can weigh more than a 100kg, this is no mean feat! Some leopards develop hunting techniques particularly suited to specific kinds of prey; specialist skills that can be passed on to future generations. Even a tsamma melon in an arid area is not offensive to the leopard palette.

Leopards are highly adaptable, aided by a relaxed approach to sustenance, a natural tendency towards secrecy and an unrivalled ability to disappear in plain sight. This is turn has resulted in leopards having the most extensive distribution range of any big cat on the planet. Even so, recent studies now suggest that leopards occur in only 25% of their historic range. 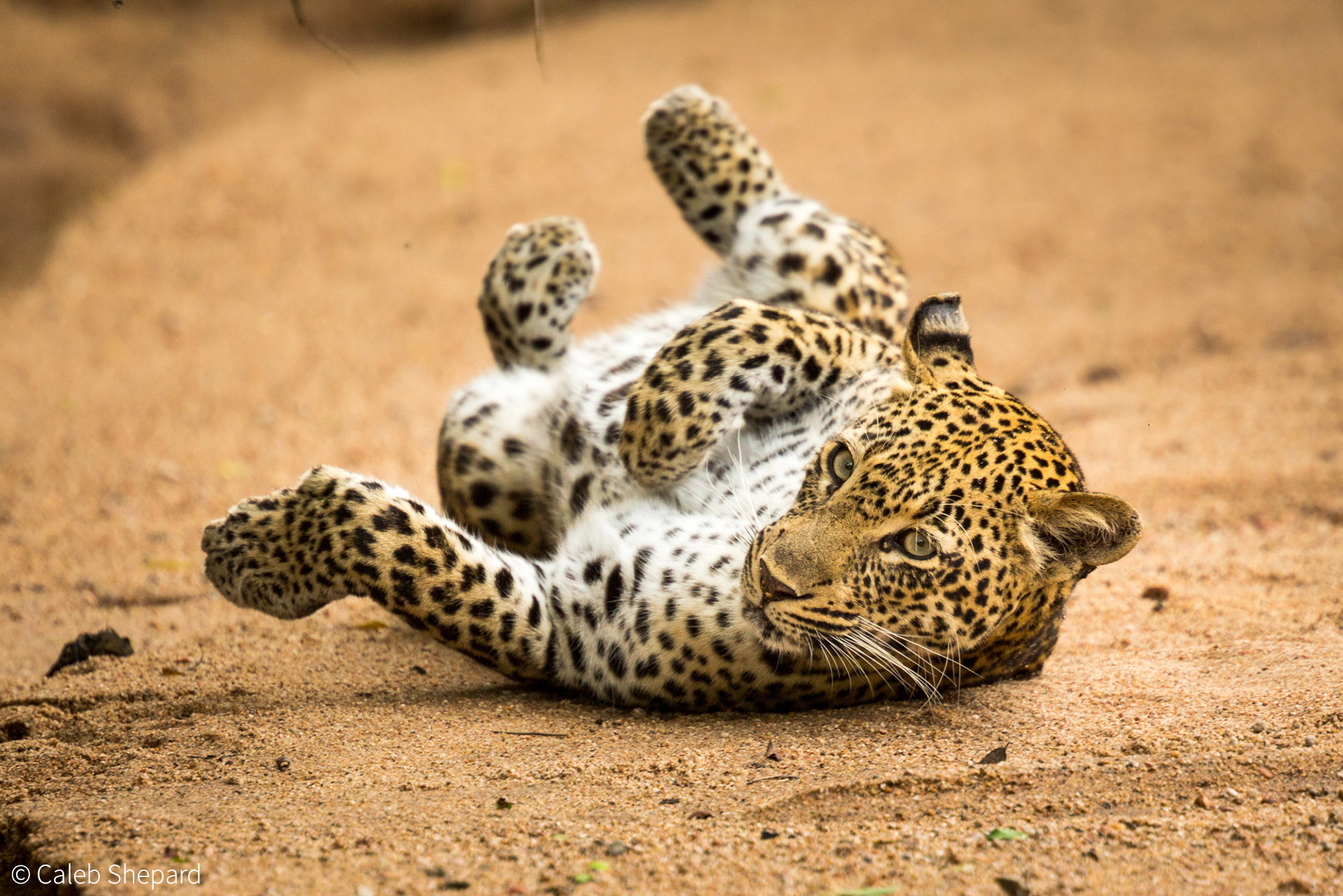 Number of offspring: between 1-3 cubs

The Cat Specialist Group of the IUCN currently recognises 8 subspecies of leopards (Panther pardus), of which only one is African:

Despite their considerably smaller physical size, Cape leopards are not considered to be a separate subspecies but, as with many species/subspecies classifications, the scientific discussion around leopard subspecies is ongoing. Studies involving complex genetic analysis continually contribute to the available information database. For example, research into mitochondrial DNA of African leopards shows that they exhibit greater genetic diversity that other recognised subspecies. For this article, all information refers to the African leopard.

It is important to note that “black” and “strawberry” leopards are not considered to be separate species or subspecies – instead, their unusual colouration is as a result of rare genetic traits. 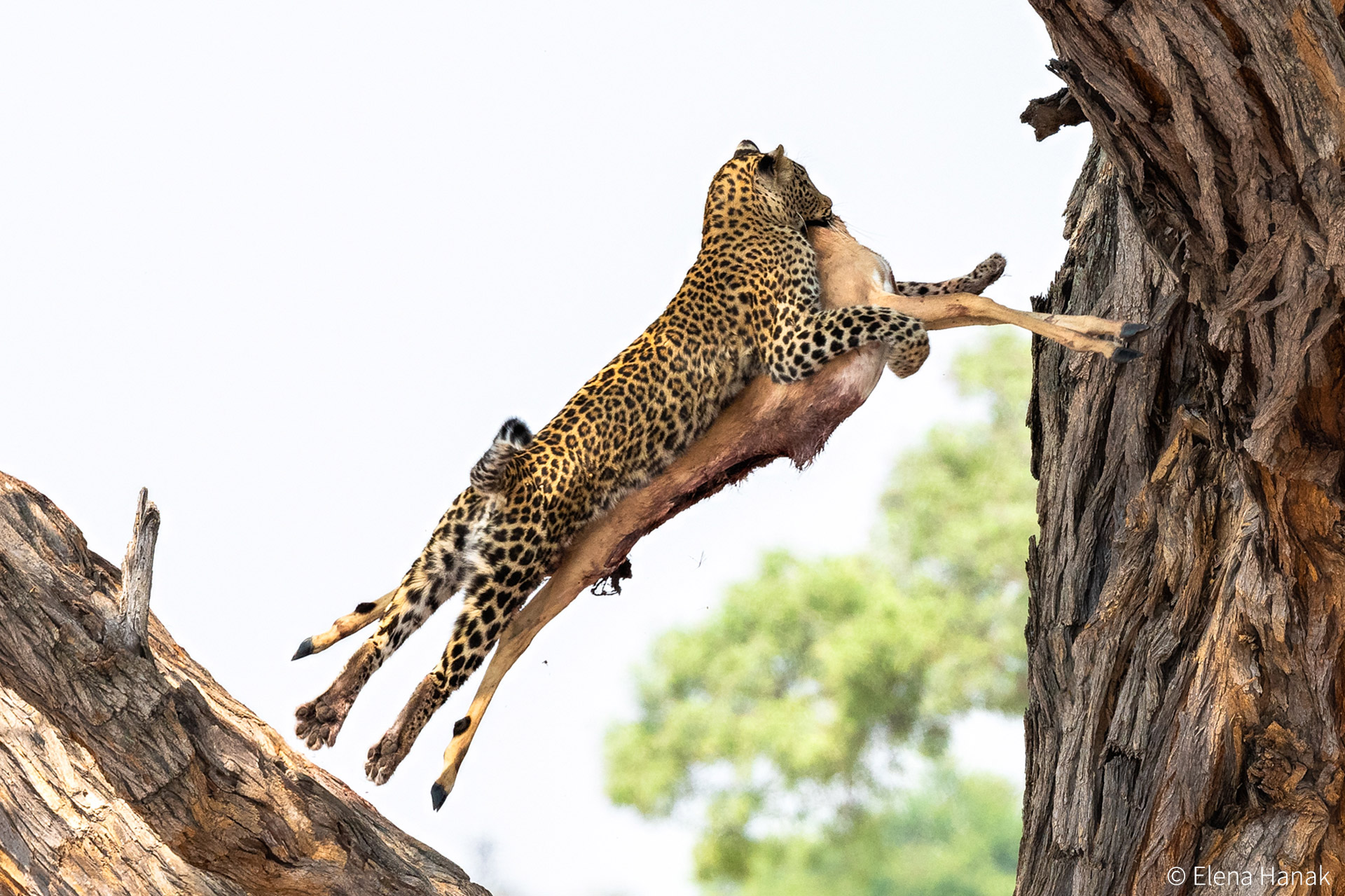 As mentioned above, one of the leading causes of cub mortality in leopards is male infanticide and to mitigate this, a female will mate with as many males as possible. She will, however, mainly target the dominant male in the area, and ‘target’ is a deliberately chosen word. A female leopard in oestrus is not subtle in communicating her intentions to a receptive male. She has little time for coquettish behaviour; instead, she launches into what can only be described as a full-blown seductive dance which culminates in an artless positioning of her hindquarters in a way that leaves little room for misinterpretation. These lurid displays can continue for up to a week, and at its peak, the pair can mate as regularly as once every two minutes, before eventually limping off in different directions in search of a substantial meal.

Female leopards give birth to their first litter cubs at around 2.5-3 years old, and these cubs are born with their eyes closed and entirely helpless. She will hide them in a suitable den site which can be anything from a hollow beneath tree roots to an abandoned aardvark burrow and, throughout her life, a female may reuse old den sites for subsequent litters. As the cubs grow, she leaves them for longer periods to hunt (and presumably have some space from their needle-sharp teeth and claws) and when the cubs are around two months old, she will start leading them to kills. Though leopard cubs are competent climbers from an early age, they are still very vulnerable, especially during the times they are left alone; cub mortality before independence can range between 50-90%. Other leopards, competitive predators such as lions and hyenas, baboons, snakes, and birds of prey are all potential threats to young leopards. At a later stage, their curious nature also has the potential to put them more at risk. 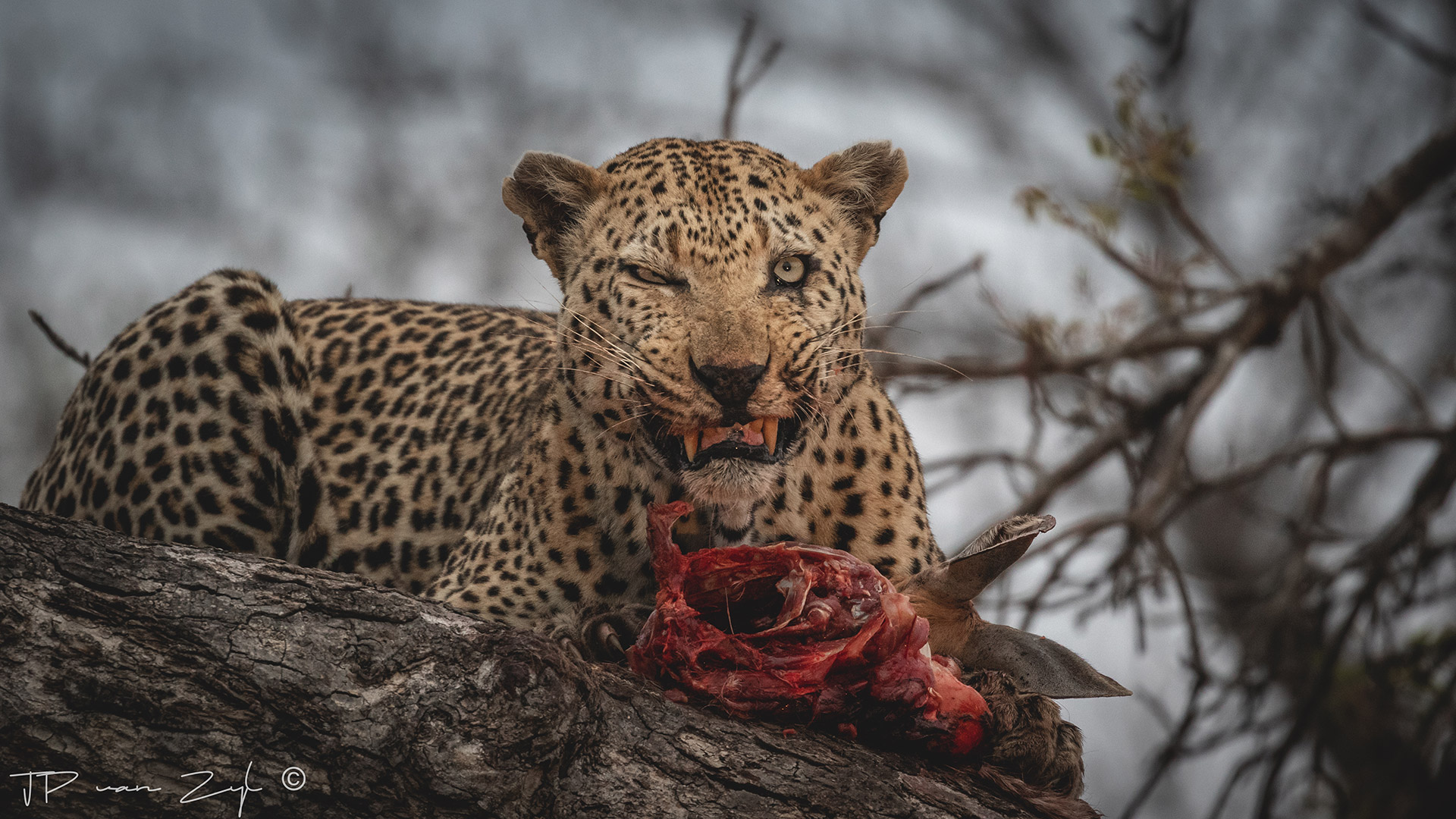 There are no reliable estimates of leopard numbers in the wild in Africa. However, researchers know that their numbers are declining. The species as a whole is currently listed as “Vulnerable” on the IUCN Red List as a result. Leopards are cryptic by looks and by nature and are the masters of hide-and-seek, which makes them somewhat difficult to count.

Anyone who has spent time with leopards has at one time, or another expressed astonishment at a leopard’s ability to vanish into the smallest patch of grass, sparsest bush, or even in plain sight in a patch of dappled light. A leopard’s coat is a marvel of nature yet has become one of the main reasons many organisations, such as Panthera, consider the leopard to be the most persecuted of all big cats. Studies have shown that every year, over 800 leopards in southern Africa are killed for their skins to be used in ceremonial regalia.

Their widespread distribution across at least 35 African countries also puts leopards at risk of human-wildlife conflict situations. Those that do wander onto agricultural land (or wildlife breeding farms) are at high risk of being killed by farmers, regardless of whether or not they attack livestock. As their available habitat decreases, this situation is bound to worsen.

In many African countries, the lack of accurate population data, combined with the leopard’s high levels of adaptability, allowed for massive overestimates of their overall populations, which in turn let to vastly unsustainable trophy hunting quotas. This misconception, the idea that leopards are abundant in the wild, still persists in some circles. Despite their listing under Appendix 1 of CITES, many countries even request (and are granted) enormous CITES trophy hunting quotas for leopards. Mozambique, for example, put forward a quote request for 120 leopard hunting permits based on an estimated 37,000 leopards. To put this into perspective, there are believed to be fewer than 5,000 leopards remaining in neighbouring South Africa, which is one of the few African countries where there is robust data available. 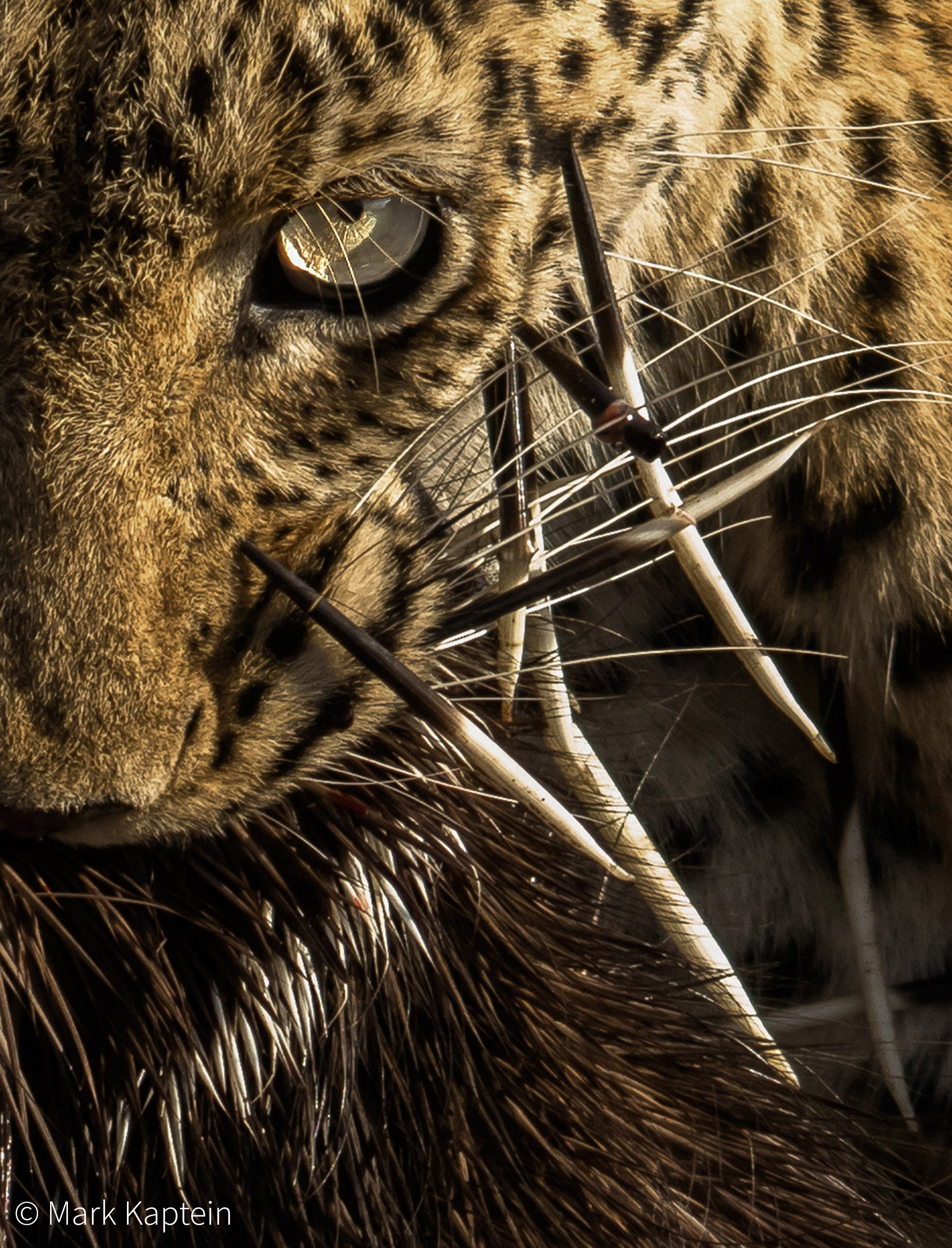 Unbeknownst to them, leopards are often number one on a safari-goer’s “want to see” list. As the most elusive of the Big 5, they are the drawcard of a safari experience – extraordinarily photogenic with an innate, and presumably accidental, ability to adopt the most striking poses. There are private game reserves where these big cats have been habituated to the presence of safari vehicles for generations and, as a result, their day-to-day lives have been opened for observation, and we have come to appreciate their unique personalities. To our anthropomorphic interpretation, some leopards convey an awe-inspiring sense of authority and control, others (often young males) are comic and curious, some are decidedly grumpy and no-nonsense, and yet others are quiet, considered and composed. Yet no matter how well we come to know these cats, an inimitable sense of mystery will always prevail. 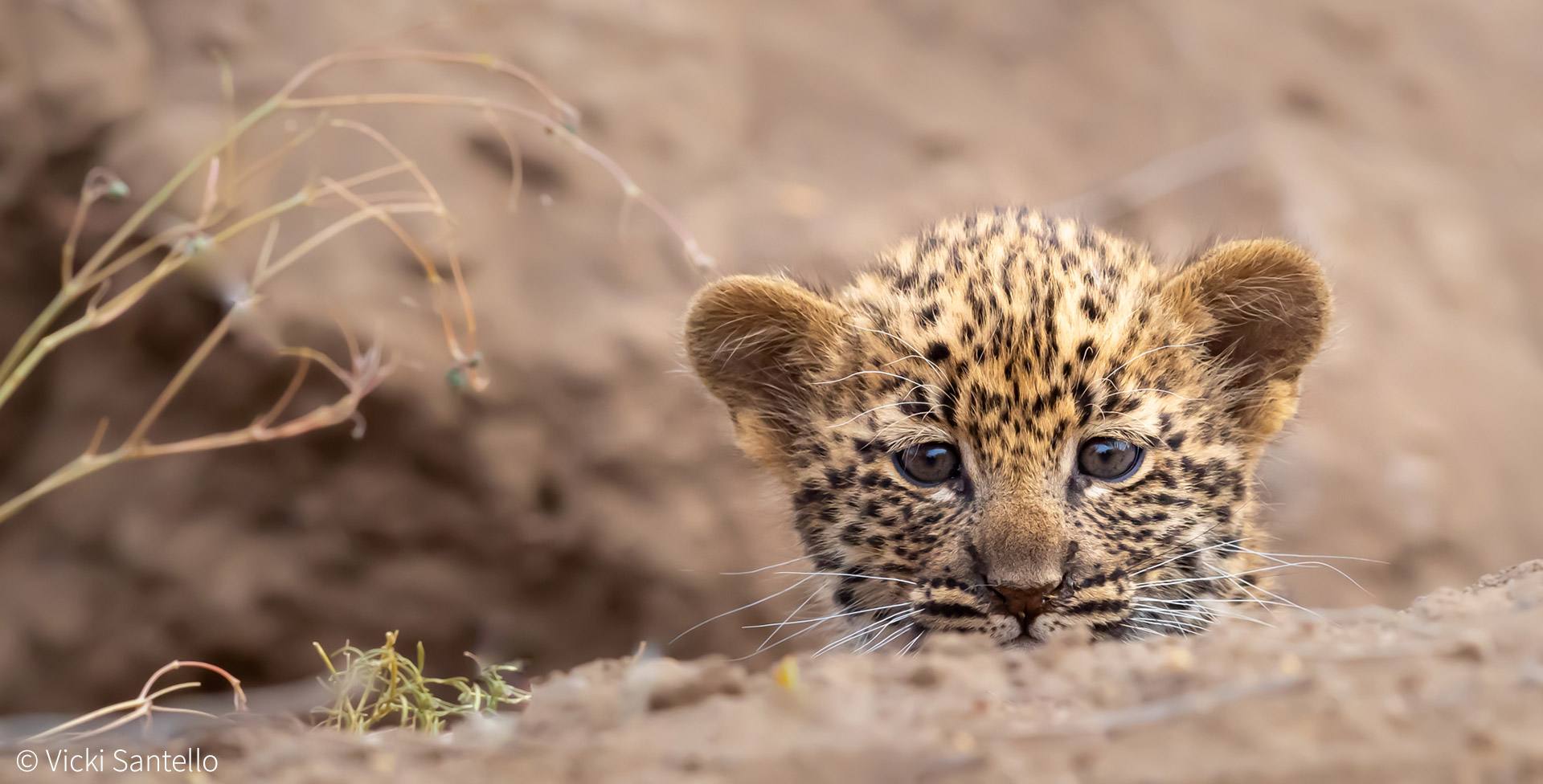