Most Westerners know that the medicinal properties of rhino horn are nothing but an ancient Eastern myth. But poachers are decimating the rhino population as Asia’s demand for horn grows and illegal trade expands. There’s now pressure to legalise the trade and farm rhinos. The argument is that by saturating the market with rhino horn, value and demand will fall. On the surface this might appear sensible, but there are lessons we can learn from a Western myth fabricated just eighty years ago. 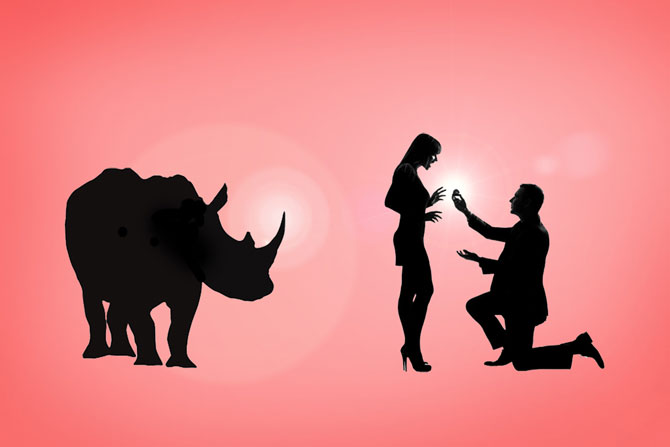 Once the privilege of royalty and aristocrats, by the 1930s, diamonds were being sold to those of far more modest means thanks to De Beers diamond company and their advertising agency, N.W Ayer & Son. As the USA came out of the depression, De Beers approached Ayer to create demand for their product. Based on a few examples set by European royalty, the advertising persuaded average Americans that a worthy man should give a diamond ring to his betrothed.

The truth was diamonds had never harboured romantic connotations; they had always been considered symbols of privilege and wealth. Yet the campaign caught the American imagination and the diamond’s association with romance grew. They exploited the exciting new medium of film by weaving diamonds into romantic Hollywood scenes and flaunting them on the fingers of the stars. The slogan Diamonds are Forever was spawned instilling a sense of lasting romance while dissuading people from selling the rocks and flooding the market. To top it off they proposed grooms spend no less than two months’ salary on an engagement ring and, as the campaign spread worldwide, British men were compelled to spend one month’s salary and Japanese men, three.

A vast number of people reading this will have a diamond ring on their finger or will have spent a great deal of money buying one. It’s probably the greatest marketing trick of all time. So what would it take to dispel the myth about the engagement ring? At the very least it would take an advertising campaign of equal proportion to the one that manufactured it and require funding only the likes of a diamond company could afford. Of course, diamond companies would counter with a campaign to reinforce the myth, and they have an eighty year head start.

Now imagine how much time and money it would take to dispel the far more ancient and elaborate myth of the medical efficacy of the rhino horn. Imagine the backlash that would ensue from deeply entrenched players. In the face of this it might appear the only course is to throw up our hands, legalise the trade and farm rhinos for their horn. In South Africa there is a great deal of pressure to put just such a proposal before the Convention on International Trade in Endangered Species (CITES) in 2016. But then we need to look at other aspects of the diamond trade:

Diamond supplies are carefully controlled. Competing companies realise that dropping prices might kill the market, therefore a certain amount is stockpiled to avoid saturating the market and keep demand and price at an optimum level.

The price of diamonds is so inflated that a vast criminal market operates in its shadow. We are generally aware of this, yet the bodies and abuse left in its wake do little to deter us. The film Blood Diamond opened millions of eyes to the horrors of the illicit trade yet there was no apparent drop in sales after its release.

Reports of Zimbabwe’s recently found Marange diamond fields, reputed to be one of the greatest reserves in history, points to corruption and human rights abuse. But while the US refuses to deal in Zimbabwean diamonds, sanctions have just been lifted in Antwerp, the centre of diamond trading.

Of the legitimate mining operations on South Africa and Namibia’s west coast, estimates are that between fifteen and thirty percent of rough diamonds exit the mines illegally. But De Beers seeks out and buys up as many of these illicit diamonds as they can in order to control the supply thus encouraging an illegal market.

Given the example of the diamond market, what would happen if we legalised the trade in rhino horn? The market would also be at risk of saturation (the stated goal of the pro rhino horn trade lobby) but it’s doubtful that the already established suppliers, with their criminal roots, would let that happen. They would want prices to remain high and the only way to ensure that would be to limit supply by hoarding stockpiles and controlling rhino population. As demand increases there could be as much if not more poaching to meet the demand and the illicit trade in rhino horn would still flourish and compete with the legitimate trade.

Conversely, if the price were to drop, it is highly unlikely it would deter poachers. At present the price hovers between US$60 000 and US$100 000 per kilogram. Drop that to a tenth of the price or even less and poachers would still gun them down to make a living.

The market for rhino horn is growing fast and will continue to grow with Asia’s booming economy. The current rise in rhino poaching is driven, to a great degree, by Vietnam’s economic rise. Here, the wealthy sprinkle horn on their food and snort it like cocaine – a sign of prestige because it is more expensive than the drug. They use it to cure hangovers and enhance hard-ons – all modern, manufactured myths.

As the demand rises, imagine the surge that would occur with legalisation. Just 1 million consumers consuming just 10g per month = 120 tons per year. At an average of 4kg per horn, that’s 30 000 rhinos per year, more than the total number of rhinos alive today. Now imagine 2 million consumers, 3 million….

A major influence would be marketing. A rumour started a few years ago claimed that a respected Vietnamese politician cured his cancer by ingesting powdered rhino horn. Such a cure has no foundation in traditional Chinese medicine; the politician was not even named, but the rumour spread rapidly. Many see it as an underground marketing campaign to drive up the value of rhino horn. If it was, it worked; measure for measure, rhino horn is now more valuable than gold.

Legalising the trade means marketers need not use the rumor mill because they can advertise in popular media. And we know how crafty advertisers can be; we fell for the diamond myth after all.

Perhaps the greatest myth is that legalising the rhino horn trade is about conservation. But it is far more significant than that. By legalising the trade we validate a fallacy. We legitimise the death of every single rhino slain illegally for its horn. We put this and other endangered species at greater risk by setting a precedent that could open avenues for trade in ivory, lion bone, leopard skin and more. We legitimise the corruption of African officials who are complicit in the illegal trade of endangered species and we set a terrible precedent for Africa’s future.