Conservation in action – as a tourism experience

A number of ecotourism operations are beginning to offer conservation activities to their guests – opportunities to see hands-on conservation in action. Lodges and parks are formalising guest safety protocols for taking their guests on rhino dehorning, elephant collaring, game capture and other veterinary interventions.

Here, two of our AG tribe share their accounts of firsthand conservation experiences.

During a recent visit to Mokala National Park – one of the newest SANParks Reserves, my husband and I discovered the building of a large boma in the middle of the reserve. This could only mean one thing – ‘game capture’. We spoke to the rangers and they agreed that we could experience the event.

As retired, hobbyist photographers, we spend an average of three to four months of the year in various SANParks reserves; this was the first time we’d had the opportunity to witness something like this. It turned out, I had no idea what actually transpired during a game capture.

First, the boma area was built bearing in mind factors such as animal pathways, wind direction, trees and space for the massive transport trucks. Then, the helicopter took off to locate a herd of the desired species (not, as I had envisaged, with different herbivores herded together). Meanwhile, the ground crew entered the boma area and positioned themselves out of sight, behind trees and the tarpaulin curtains. The first target for our capture team was a herd of zebra.

After just 15 minutes, we heard the siren from the helicopter warning the crew that the herd was close. Then a different siren sounded as the animals were about to enter the boma. This told the ground crew to pull the first tarpaulin curtains closed behind the advancing herd. All this happened in seconds.

Then the hard work began.

We watched the ground crew guide the herd towards the holding pen, still with the assistance of the helicopter. This is far easier said than done as zebras have an excellent sense of smell – if they scent human, they can panic and dart off in the opposite direction. It took a while, but finally after three different curtain closures, each one smaller than the last, the herd was in the holding pen.

All the captured animals were then counted, sexed and finally tranquillised for the onward journey. This was done by a professional team of SANParks veterinarians. The procedure was performed methodically by marking each animal with a green stripe after the first tranquilliser, followed by a yellow stripe after the second. Once completed the zebras were loaded into the trucks. Depending on the species, some are loaded and only then tranquillised through the roof of the vehicles.

I was fortunate enough to photograph the eland capture from the top of one of the trucks. The eland were quite happy to run from the holding pen straight up the ramp into the truck where the tranquillising was done through the roof.

The three large trucks interlinked in a U formation – the animals walked through the first and second trucks and into the last. This meant there was no moving, reversing or changing trucks after each capture – therefore less stress on the animals.

The entire day’s experience was one of the most exhilarating and educational of my life. I can only admire the dedication and hard work of the SANParks team. They worked tirelessly for the entire day, hiding up trees and wrapped in tarpaulin curtains; all to ensure the animals were captured and transported to their new homes in the safest, most humane way possible.

To quote Ben, a long time SANParks employee, ‘You must come and help so that you can tell your children and grandchildren you were involved in relocating wild animals; this is not something many people get to do in their life.’

Mokala National Park is known as the breeding park for our unusual and endangered animals. It has no natural predators and the herds grow to numbers greater than the park can sustain. It is, therefore, necessary to control the numbers – hence the game capture and redistribution programme.

All the animals from this day’s capture went to various rigorously screened game farms in the Northern Cape as part of an effort to create a greater spread of species across the country. The farms were pre-approved after undergoing a rigorous screening process by the SANParks.

Thank you to Rudi and Lawrence for giving us the opportunity to be a part of the team and photograph the day’s proceedings.

Have you ever seen a collared wild animal and wondered why it is so? Tracking wildlife with remote radio collars stretches back to the 1960s and since its inception, it has seen widespread use by those studying and conserving wildlife. Collars are the most widely used tracking devices for mammals because they are relatively easy to fit and have minimal impact on an animal’s wellbeing. Powered by batteries, they are designed to run for a set period (usually influenced by the frequency of data transmission) before being manually removed.

Most collars are equipped with a VHF radio transmitter and/ or a GPS transmitter, allowing the animal to be tracked directly in the field, and online. By observing an animal’s long-term movements, researchers can develop a better understanding of their behaviour, habitat selection, home range size, and potential for human encounters. Collars provide researchers with detailed pictures of species’ ecology – information critical for conservation.

I was fortunate to have the chance to join an elephant collaring mission in Zambezi National Park, situated just outside Victoria Falls in northern Zimbabwe. The mission was orchestrated by the Zimbabwe Parks and Wildlife Management Authority (Zimparks). The project was part of an effort to understand the elephant population in the little-studied park which is part of the Kavango Zambezi (KAZA) Transfrontier conservation area.

As you might imagine, collaring an animal the size of an elephant is a complex operation, with many precautions in place to minimise the risk to both human and elephant. With a relatively large team consisting of researchers, rangers, vets, hunters and a small group of university students from Australia, there was no margin for error.

We assembled at the gates of the park in the early afternoon, and after a safety briefing, we headed off. Our convoy bumped along the dirt tracks that navigate through the thick bush, before opening up to the Chamabondo Vlei, a strip of open grassland that runs through the otherwise densely forested southern half of the park. Elephants are frequently sighted here, and sure enough, we encountered a herd at a watering hole.

The experts in the team quickly identified a suitable individual – an adult cow. Although only one individual would be collared, the information collected from the collar was expected to represent the entire herd. Adult cows are selected as they are the most likely to remain with the group and will not outgrow the collar. 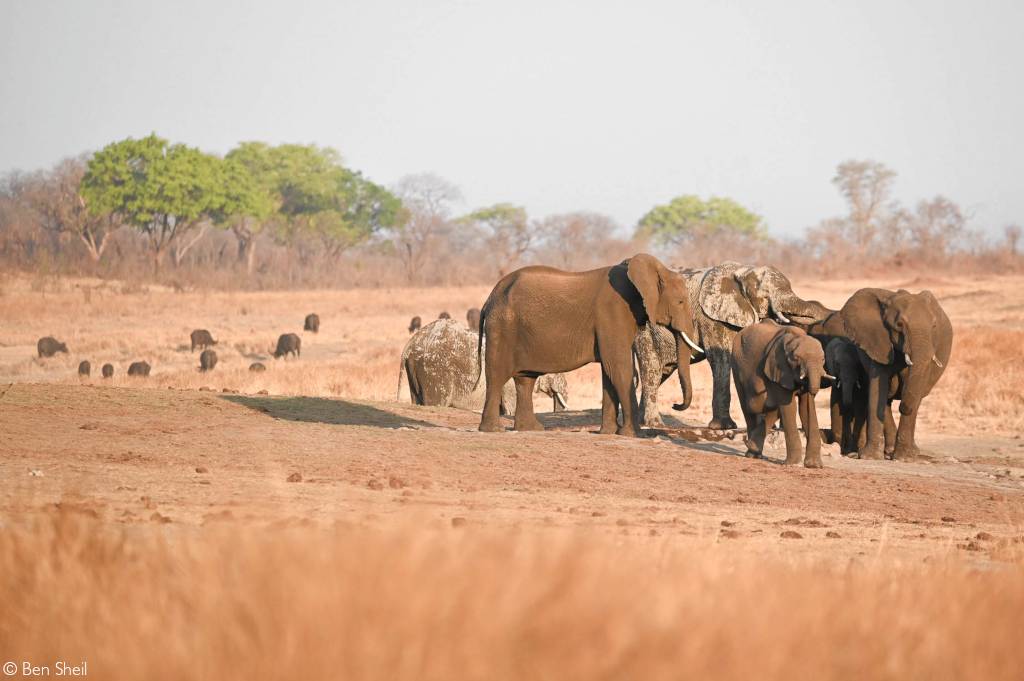 We waited at a distance as the herd slowly abandoned the watering hole and headed for the thick bush that flanks the grassland. One truck, with the vet on the back holding the loaded dart gun, approached the herd. As soon as the opportunity presented, the shot rang out. Through my telephoto lens, I saw the dart impact the elephant’s right thigh. A perfect shot.

The herd quickly ran into the forest and the rest of us on the ground scrambled in chase. We parked up next to the boundary of the forest and set off on foot, following the tracks of the retreating herd. A couple of hundred metres in, we found her lying on the ground, completely knocked out.

The collaring had to be swift, and this is where the importance of having a hugely skilled team is crucial. Some pairs of hands were dedicated to attaching the collar, some took measurements and tissue samples while others fanned her ears and sprayed them with water – regulating her temperature. A great deal of attention was also focused on the surrounding bush, making sure the rest of the herd wasn’t about to charge to the aid of the downed female.

Within a few minutes, the collar was attached and measurements recorded. The team packed up and left hastily. As we walked back through the bush, we began to hear the bellows of the waking cow. We returned to the vehicles and took a deep breath to fully absorb the experience.

This particular elephant was one of three collared in Zambezi National Park over the course of a few months and researchers gained the ability to track the movements of the herds online. The information received remotely is valuable alone, but it also allows the researchers to better locate the herds in the field. Twice a week the team ventures into the park to gather data from the ground.

Locating these specific herds in the field is still no easy task even with the aid of the radio collars. Before heading out in the mornings, the researchers check the last-known GPS location online. They then drive as close as possible to the coordinates before using radio telemetry to zero in on the elephant. This involves holding an antenna in the air and listening for beeps that come through the receiver, roughly indicating the distance and direction of the collar. Often, the elephants are situated in areas of thick bush inaccessible to the team, but the job has become even harder after two of the collared individuals joined other herds – an example of how socially dynamic elephants can be.

When the elephants are spotted, the team take recordings on the herd size, demography, health and behaviours, and this, coupled with the long-term movements of the herd, provided by the GPS, gives the researchers an enhanced understanding of the status of elephants in the park. The purpose of this information is used to advise conservation initiatives such as mitigating human-elephant conflict in the region.

It is true that seeing a collar wrapped around the neck of a wild animal isn’t pretty, but the value of these instruments shouldn’t be understated. The efforts of conservation organisations have a big part to play in the fight to save threatened animals – and with issues such as climate change, habitat loss, poaching, and human-wildlife conflict all adding to the uncertainty of what lies ahead, these efforts are needed now more than ever.