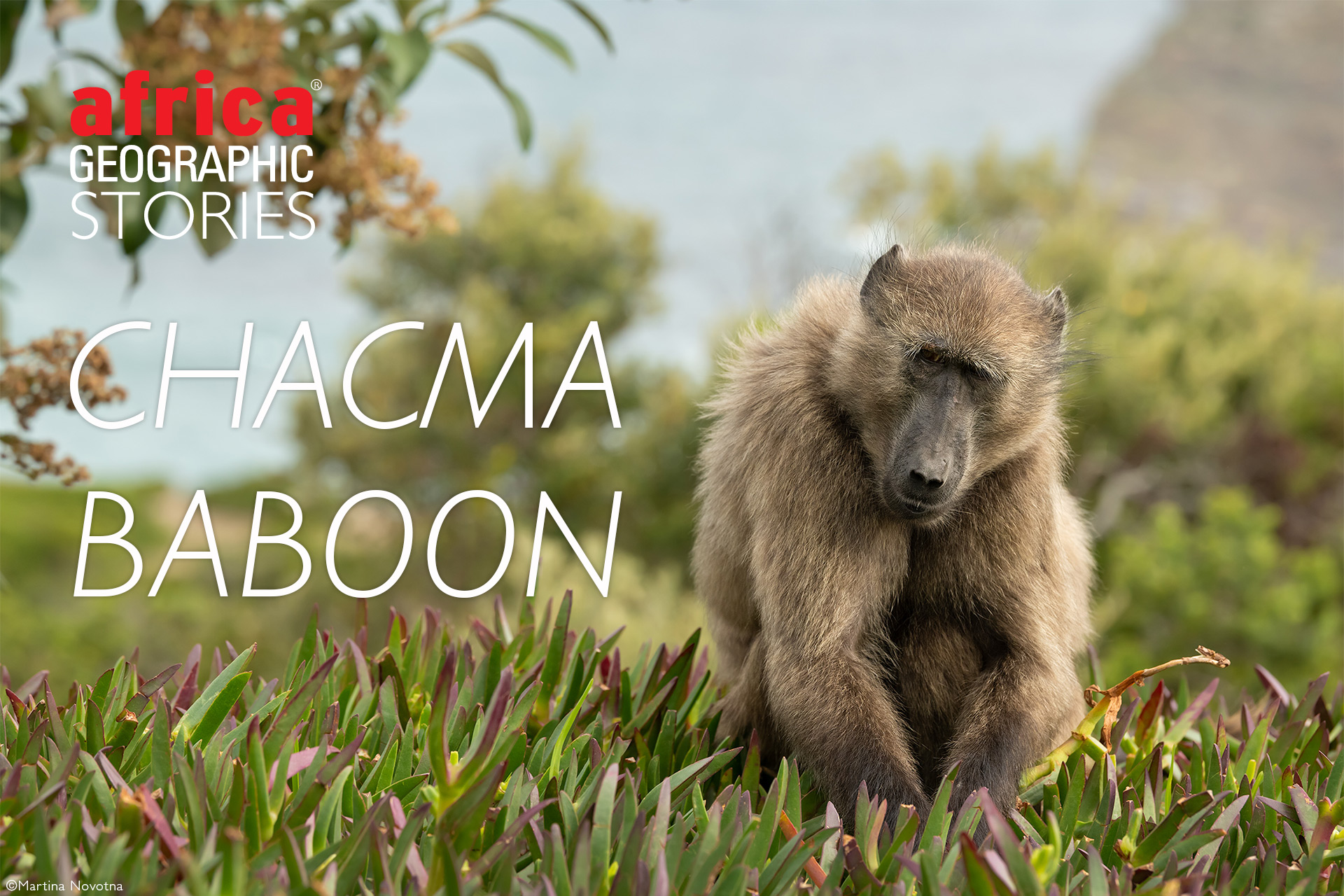 Towards the end of the 19th century, burgeoning industry and development saw railway lines spreading across South Africa – a network crisscrossing the country, despite the rumblings of war to come.  Along the Port Elizabeth mainline, at the Uitenhage train station, a signal box worker was paid 20c and half a bottle of beer a week for the nine years that he worked for the railway before his death from tuberculosis in 1890. It was said that he never made a mistake during his employment by the railroad, which is particularly remarkable given that, while exceedingly diligent, he also happened to be a chacma baboon.

The story of how Jack the baboon helped his disabled owner is just one of the many historical anecdotes that highlights the complicated (and occasionally fractious) relationships between humans and baboons throughout our history together. It also serves as a prime example of the most attractive and potentially problematic characteristic of baboons – a fierce and profound intelligence.

Chacma baboons are one of the largest monkeys in the world, second only to the mandrill by mass, though baboons are longer and taller on average. Their scientific name – Papio ursinus – is a reference to their bear-like features (and swagger). In adult males, powerful canines can grow to a length of close to 4cm, similar in size to those of a leopard, and are used in battles for dominance and defence of the troop. Crocodiles, leopards, and lions will all prey on baboons, and some painted wolves (African wild dogs) of Mana Pools famously specialize in hunting the baboon troops of the region. Leopards, in particular, have a fierce rivalry with baboons, and certain individual leopards learn to take advantage of the diurnal habits of chacma baboons to stalk them at night while they rest in trees. That said, chacma baboons are imminently capable of turning this rivalry on its head; they have been known to grab and kill leopard cubs (and even a lion cub on rare occasions).

Chacma baboons are omnivorous, and though the bulk of their diet consists of plant material, they do eat meat and have even been known to hunt small antelope. In agricultural areas, this makes them a threat to livestock, particularly for young farm animals. Their diet can be extremely varied and includes fruits, seeds, grass, blossoms, bulbs, insects, worms, rodents, birds (and eggs) and fungi. The chacma baboons found on the coast of South Africa regularly break open mussels and feed on the fleshy molluscs.

This liberal approach to food allows baboons to occupy a wide variety of habitats, including coastal, mountainous, and forested regions, as well as woodland savannahs and semi-deserts throughout Southern Africa, extending north from South Africa to Angola, Zambia, and Mozambique. Troop numbers vary considerably, with numbers of anywhere from 20 to over 100, and consist of a mixture of related and unrelated individuals subjugated by a handful of dominant males. Chacma baboons are sexually dimorphic, with males growing to almost double the size of the females.

Baboons are found throughout Africa, with one species having an extended range into part of the Arabian Peninsula. Naturally, there has been hybridization between baboons of different species, and the distinctions are so blurred that some scientists recommended considering almost all baboon species to be subspecies of the hamadryas baboon (Papio hamadryas). Gelada baboons belong to the same tribe but are more distantly related and are grouped in a separate genus.

There are also three recognized subspecies of chacma baboon: the Cape chacma (P. u. ursinus), the grey-footed chacma (P. u. griseipes) and the Ruacana chacma (P. u. raucana). It should be noted that although this article is dedicated to the chacma baboon, there are many ecological and behavioural similarities with other species, particularly yellow and olive baboons. 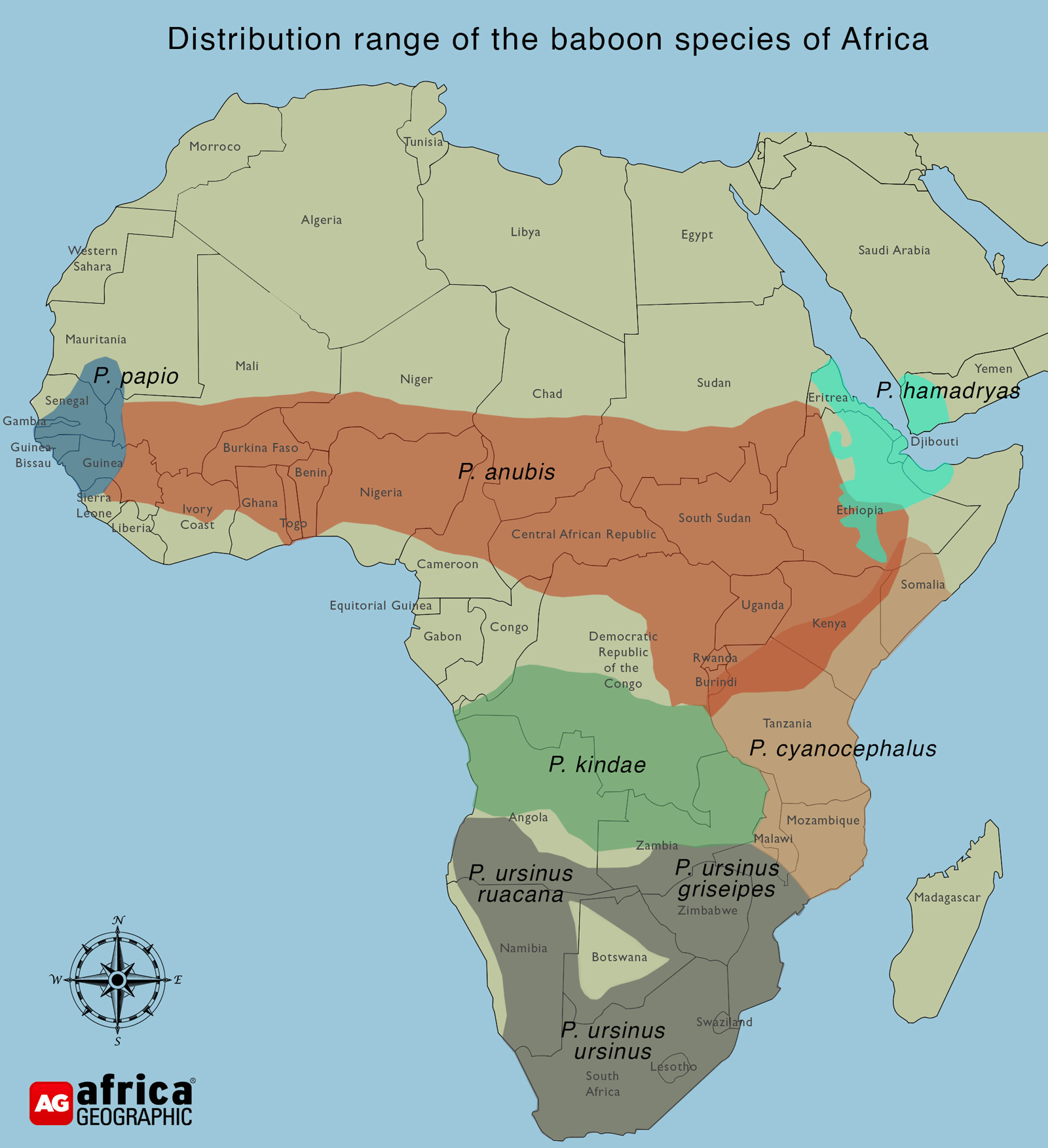 The typically large troop sizes inevitably lead to a complex arrangement of hierarchies and power-struggles, resulting in a social structure that is difficult to summarize. The troops consist of adult males, adult females, and their offspring and the females have their own separate hierarchy that is inherited in a manner similar to spotted hyenas. Females generally stay in their natal troop throughout their lives. In contrast, males often move between troops, and the status of the dominant males can be tenuous and subject to change. When a shift in dominant males occurs, a newly dominant male commonly commits infanticide to bring the female back into oestrous. As a result, females carefully foster close relationships with certain males in a manner that we would interpret as “friendship” (and is referred to as such in descriptions of baboon behaviour). Research indicates that this is most likely a counterstrategy to infanticide and that, in forming this friendship, this male may intervene to protect her youngster from another male.

The interplay of relationships, romances and the occasional ruckus makes observing baboons in the wild an imminently rewarding experience. Baboons breed all year round, and a troop will always include infants of various ages, from tiny creatures with absurdly prominent ears to the more rambunctious youngsters riding piggy-back style on their mother’s back. The infants are so childlike at times that it is almost unnerving to watch their innate curiosity as they begin to venture from their mothers to explore the world around them by mimicking adult behaviour. 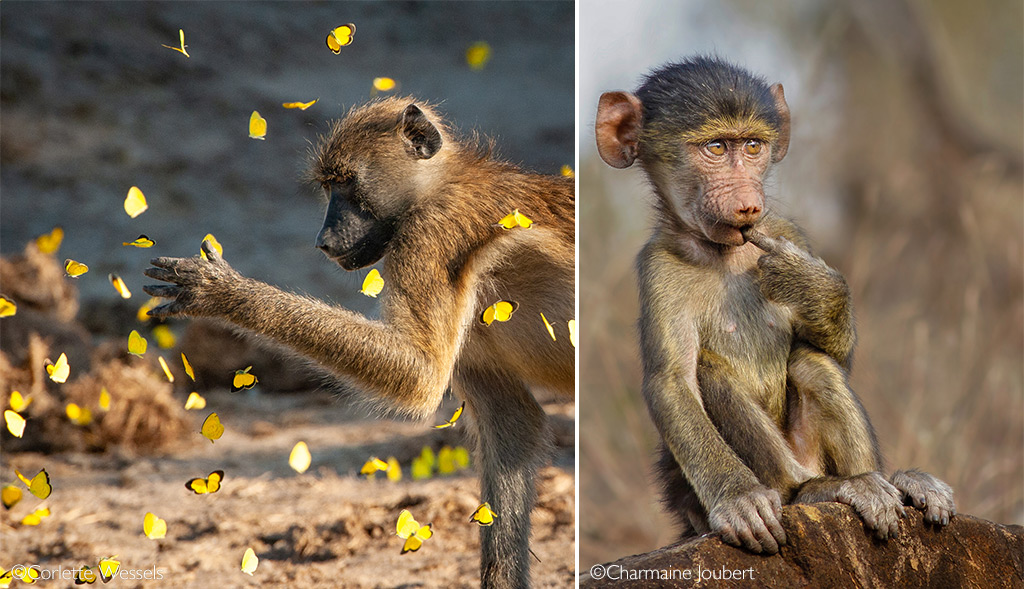 Complex social structures come with complex forms of communications, and baboons interact with each other through a series of different vocalizations, as well as a range of body language subtleties and facial expressions. Their famously colourful backsides are just another tool in their spectrum of visual communication – these bald sections of skin underneath the tail are known as ischial callosities and can be used to differentiate between females and young males, as there is a clear central division in those of the females. While they do play a role in sexual signalling in mature individuals, they also aid the baboons when balanced on thin branches at night, allowing them to sleep sitting upright.

Wild baboons are instinctively wary of humans but are quick to learn new tricks and pass this on to the next generation. When they learn to associate humans with free food, they can cause enormous damage and pose a potential threat to human safety, as well as their own. This is true of most monkey species but is particularly relevant to baboons due to their large size and strength – determined individuals have been known to lift glass sliding doors off their rails to gain entrance to a kitchen. It can be deeply distressing to return from a successful game drive at a lodge to discover your belongings strewn through the bushveld, a chewed tube of toothpaste and a pungent calling card in the bathroom sink for good measure.

These inconveniences can turn dangerous when humans ignore the rules and encourage this behaviour by failing to secure food or, worse, blatantly ignoring rules by feeding baboons. Those who do so tend to gravitate towards feeding the females and cute infants, rather than the males, which offends the very core of the baboon social hierarchy and can send the dominant male into fits of testosterone-driven rage. This is the case in South Africa’s Cape Peninsula, where the baboons of the area learnt to behave like thugs, opening house and car doors and physically intimidating tourists into dropping food. Due to their male-dominant hierarchy, baboons are quick to distinguish between human men and woman, showing more fear of the former and generally targeting the latter. 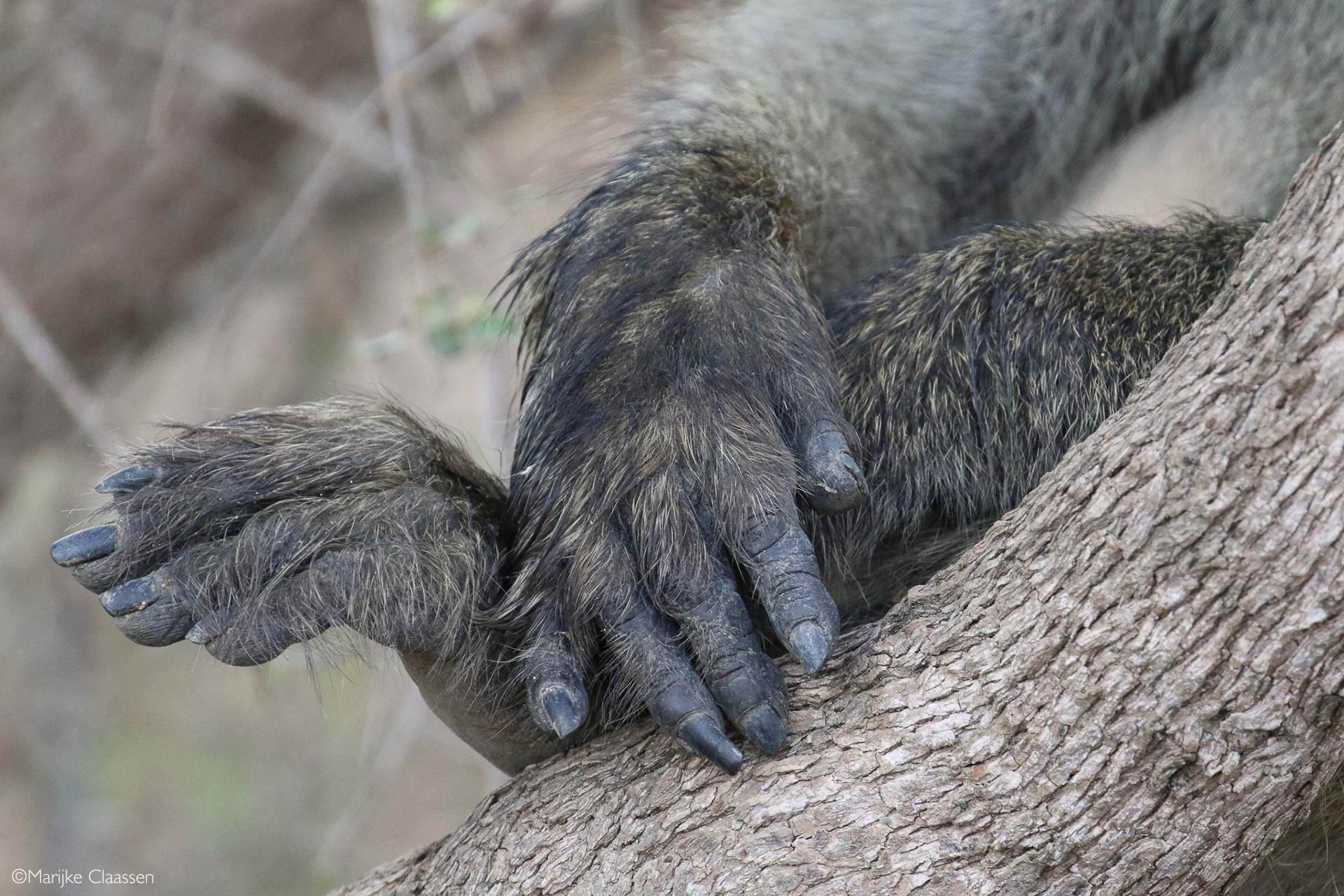 For farmers, baboons can cause extensive damage to field crops and orchards and are extremely difficult to deter. There are non-lethal ways of keeping baboons away, including the use of paintball guns, Anatolian shepherd dogs or even motion-triggered loudspeakers, but these require an inventive approach and commitment from the farmer concerned, as baboons are quick to learn and adapt. Behavioural biologists are constantly seeking different solutions to aid farmers but unfortunately for the baboons, they face the same threat as every other animal on this planet. Their habitat is ever-shrinking in the face of human development and those on the fringes are consistently forced into contact with people, usually to their detriment. Furthermore, in some areas, humans have dramatically reduced the numbers of the natural predators of baboons, resulting in explosive population growth.

A few years ago, scientists discovered the oldest known baboon skull – a partial cranium believed to be 2-million-years old – in a cave in the Cradle of Humankind of South Africa. It is quite possible that this early baboon displayed the same penchant for thievery as its modern ancestors, perhaps raiding the food of our ancestors sharing the same cave system. While our history together may go back millennia, many people find it much harder to like baboons or appreciate them the way they do other wildlife. Perhaps it’s our 94% shared DNA (and behavioural similarities that are occasionally too close for comfort) or maybe it’s the unfathomable but knowing look of those bright amber eyes. Either way, time spent with baboons is always guaranteed to provide entertainment.