Another year of loss – an update on Kruger’s rhino populations

Posted on December 6, 2022 by teamAG in the News Desk post series.
ShareTweetPinEmailShareShareLinkedIn

The SANParks Annual Report 2021/2022 confirms that rhino populations in the Kruger National Park have continued to decline, with a loss of 14.7% of white rhinos over the reporting period. However, black rhino populations were estimated to have increased by 2.9%.

Unlike previous Annual Reports, the 2021/2022 Report does not provide population estimates for either white or black rhinos within the park. However, Dr Sam Ferreira, Large Mammal Ecologist for  SANParks and the Scientific Officer for the African Rhino Specialist Group, has confirmed the 2021 estimates for Africa Geographic. There were an estimated 2,250 (between 1,986 and 2,513*) white rhinos in Kruger in September 2021, compared to the 2,607 (between 2,475 and 2,752), counted in September 2020. For black rhinos, the 2021 survey estimated 208 (between 160-255) black rhinos occurring in Kruger, with confidence intervals overlapping the 2020 estimate of 202 (between 172 and 237). Ferreira confirmed that the results of the 2022 census are still being analysed.

*Editorial note: All population estimates are given a margin of error, as population counts over large areas carry inherent uncertainty. When calculating the percentage decline/increase, these margins of error are included in the statistical analysis. 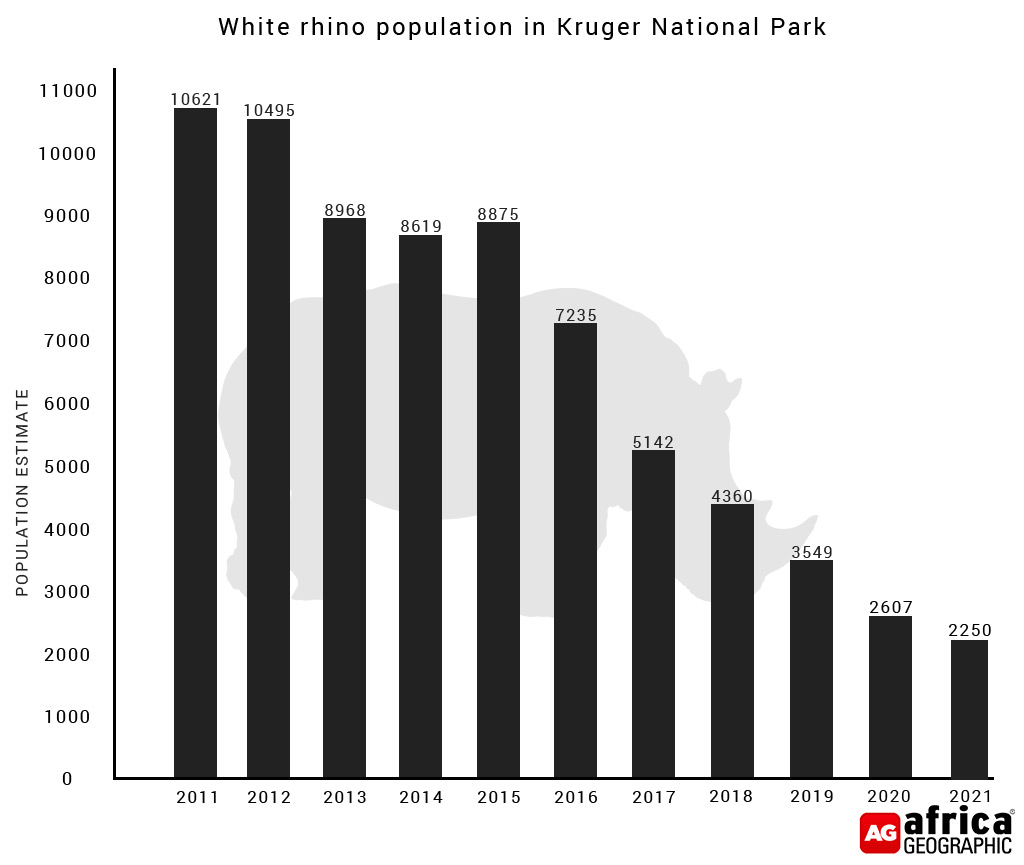 The 2021/2022 Report confirms that 195 rhinos were poached in the Kruger National Park in 2021, a decrease from 247 in the previous year. (The most recent statistics from the Kruger National Park suggest that 82 rhinos were killed in the park in the first six months of 2022.) No rhinos have been lost in other SANParks-operated parks, namely Addo Elephant, Karoo, Mountain Zebra, Mokala, Mapungubwe and Marakele National Parks. These rhino populations have increased by 6.2%, and populations of south-western black rhinos (Diceros bicornis bicornis) outside of the Kruger have exceeded growth performance targets.

The Annual Report indicates that a new Rhino Strategy has been developed, focusing on “achieving thriving, growing rhino populations of a minimum size; and resilient communities across all stakeholders owning, valuing and benefitting from rhinos in a safe environment”. This will include strategic dehorning, range expansion and establishing “insurance populations”. Eight hundred and five rhinos have been dehorned in the Kruger National Park between 2021 and 2022, with a focus on cows and core protection zones. The report also references the establishment of rhino “strongholds” outside of the Kruger National Park to serve as sources for re-introductions in the long term.

However, as increased security and plummeting rhino numbers have made poaching more challenging in Kruger, there has been a concerning shift in focus to KwaZulu-Natal in South Africa, where nearly 200 rhinos have been killed this year alone (mainly in Hluhluwe iMfolozi National Park), and to Namibia and Botswana.

Although the reduced poaching statistics are due primarily to there being fewer wild rhinos remaining, there is no question that the back-breaking work of passionate and dedicated SANParks employees is also a factor, and those that have contributed should be lauded for their efforts