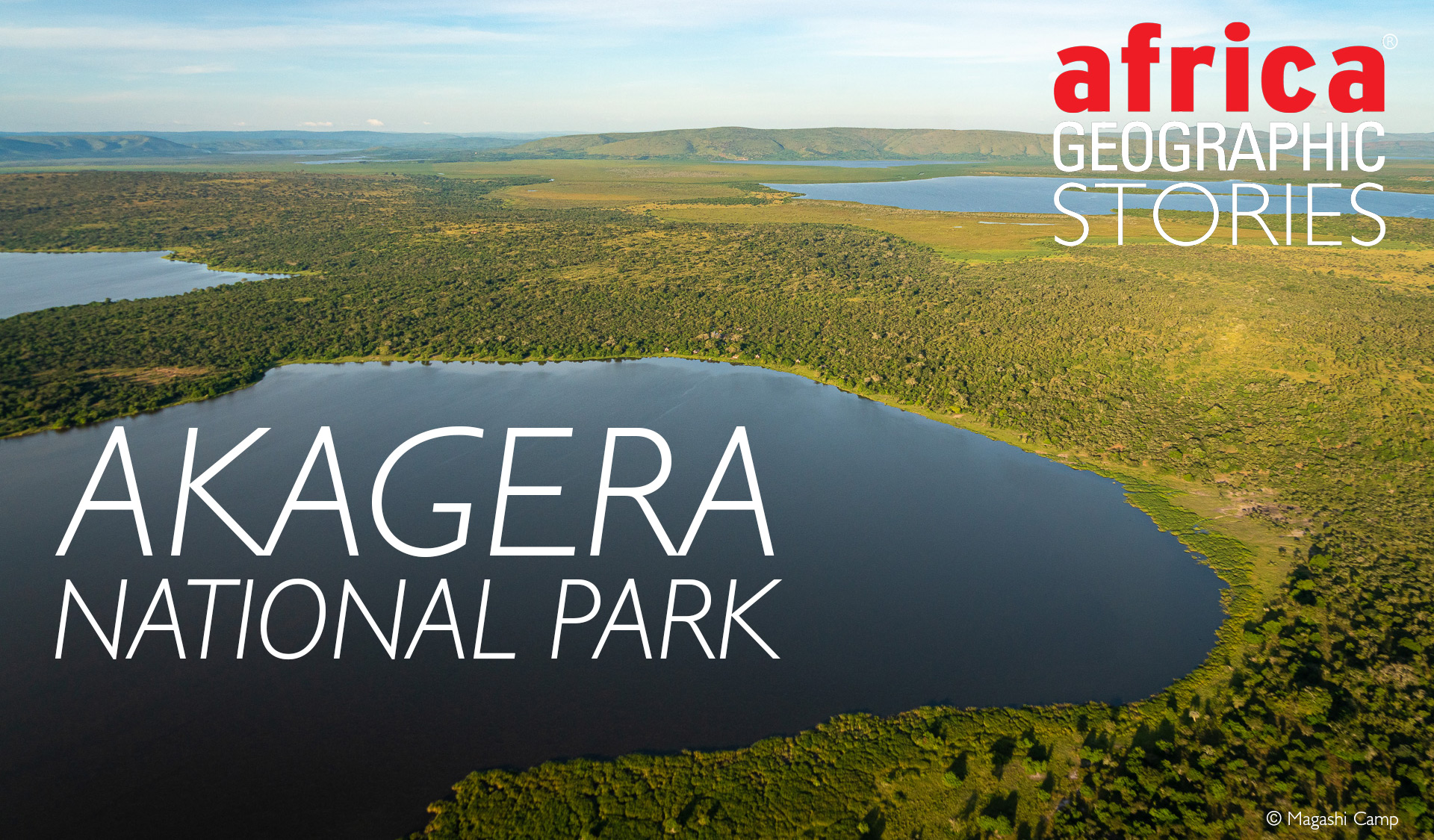 Every protected space in Africa comes with its own story, with elements from every genre: drama, thriller, romance and tragedy. The fates and fortunes of these parks are irrevocably bound to those of the people around them, and no two chronicles are ever the same. Each visitor to an African wilderness experiences a snapshot in time, a chapter or two at most. But for those fortunate enough to visit Rwanda’s Akagera National Park, these may just be the best chapters in the entire saga. In the past decade, Akagera has established itself as a park on the rise – demonstrating an almost unbelievable transformation into Rwanda’s only Big 5 park and one of the premier safari destinations on the continent. 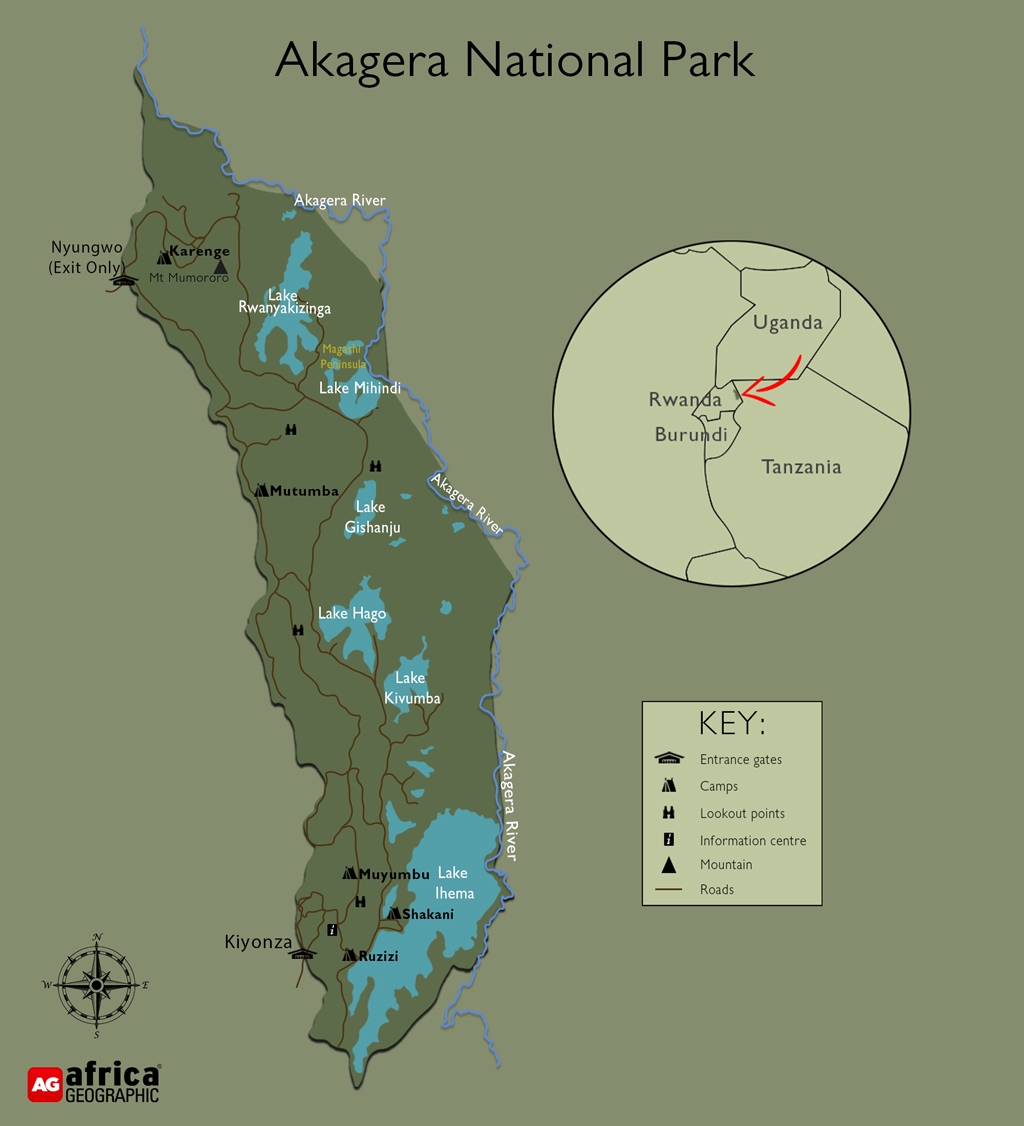 The 1,122km2 (112,200 hectares) Akagera National Park is situated on the eastern edge of Rwanda, where the boundary with Tanzania is marked by the sinuous bends of the Akagera River (for which the park is named). Akagera safeguards Central Africa’s largest protected wetland, consisting of a complex system of lakes linked by papyrus-lined swamps. Away from the marshes, the jagged lines of animal pathways weave across vast plains and sweeping highlands like a network of veins, a testament to Akagera’s status as Rwanda’s last refuge for savannah-adapted wildlife.

As clouds gather above the rolling sandstone hills and elephants feed peacefully in woodland valleys below, the breathtaking vistas are almost primaeval. The landscape, teeming with life at every level, seems so eternal that it is hard to imagine that its very existence was so recently threatened. Yet less than three decades ago, during the Rwandan Civil War and the years of recovery that followed, the park was invaded and denuded, its wildlife decimated by poaching and human-wildlife conflict.

Akagera’s rehabilitation can be attributed to the partnership between African Parks and the Rwanda Development Board. They entered into a joint management agreement in 2009 and began the day-to-day running of the park in 2010. Their progressive stewardship stayed the destruction and turned the narrative from looming catastrophe to one of long-term, sustainable conservation. Thanks to considerable investment in the park’s infrastructure and security, existing wildlife populations began to recover, bolstered by ambitious reintroduction programmes. Tourist numbers, both local and international, grew in leaps and bounds, and by 2019, Akagera was 90% self-financing.

Most importantly, community involvement has always been a fundamental tenant of African Park’s approach to managing all the parks under their guardianship, and Akagera is no different. Today, 300,000 people on the park boundary directly benefit from its existence, while educational programmes and support for community enterprises have reshaped local perceptions. Nearly half of the visitors to the park in 2019 were Rwandan citizens.

The return of the animals

Under certain circumstances, nature’s remarkable innate resilience allows wildlife numbers to recover independently, and the only human intervention needed is to provide them with a safe space to do so. This is always the preferred approach, but more dramatic measures are necessary when population numbers are too low to recover, if genetic sustainability is compromised, or a species is locally extinct. In Akagera, the restoration to its natural state has necessitated several large-scale wildlife reintroductions that have effectively reversed several local extinctions.

Savannah elephants and Maasai giraffe were among some of the first large mammal species to be reintroduced after poaching in the latter half of the 20th century wiped out existing populations. A small herd of young elephants arrived in the park in 1975, with giraffes following some ten years later. Today the park’s growing elephant population is estimated to be around 100 individuals, while some 80 giraffes are wandering its confines.

Akagera is also reclaiming its title as one of Africa’s rhino havens. In the 1970s, the park was estimated to be home to over 50 eastern black rhinos, but widescale poaching hit them particularly hard. The last sighting of a black rhino occurred in 2007 before they were considered locally extinct. Ten years later, the park was deemed to be sufficiently secure for their return, and 18 eastern black rhinos made the cross-continent journey from South Africa to their new home in Rwanda. They were joined two years later by a further five rhinos sourced from European zoos – the first such operation of its kind. Despite their somewhat different (definitely colder) start in life, the zoo rhinos seem to be adapting well to life in their ancestral homeland. At the end of 2021, the first white rhinos arrived from Phinda Private Game Reserve in South Africa in what was the single largest rhino translocation ever conducted.

The park’s lions suffered a similar fate during the 1990s – all 300 lions in the park were killed before the 21st century. A founder population of seven lions was sourced from South Africa in 2015, followed by two males in 2017 to increase genetic diversity. To suggest that the lions have taken to their new home would be something of an understatement – the population has quadrupled in seven years. Spotted hyenas and leopards are also found in healthy numbers in the park.

Though the reintroductions of specific iconic species were prodigious enterprises in their own right, the natural recovery of Akagera’s landscapes and existing wildlife populations has been equally impressive. At the start of 2010, wildlife numbers were estimated to be fewer than 5,000 and are now believed to be well over 13,000 and ever-increasing.

Sizeable herds of buffalo, topi and zebra are everywhere, taking advantage of the bountiful grasses, while defassa waterbuck are perfectly at home wading through the swamps and reeds past pods of hippo. The endangered roan antelope may be somewhat elusive, but the towering statuesque eland are unmistakable, dwarfing surrounding impala and duiker. Klipspringer show off tip-toe agility on the rocky crags of hilly slopes. The primates are represented by large olive baboon and vervet monkey troops, the consummate survivors. Sightings of blue monkey are less frequent, but they have been spotted over recent years, firmly disproving the belief that they are extinct in the park.

Akagera National Park is also one of the best birding regions in Africa, if not the world, with over a whopping 480 species recorded in the park. The diversity of habitats on display means that fervid birders can apply their skills in several different ways, from peering through reeds and rushes for a papyrus gonalek to scanning the skies for the characteristic wing and tail shape of a lesser kestrel, or listening out for the call of a red-faced barbet in a thicket. Shoebills have been seen lurking in the swamps, and, most recently, a sighting of the somewhat unfairly named plain nightjar had the birding chatrooms all aflutter.

With the plans for Akagera’s continued upward trajectory firmly rooted in tourism, every effort has been made to make the park the perfect destination for visitors from every walk of life. Each of the activities on offer was carefully selected to show off the park’s many strengths and provide the ideal way to explore every inch of the many varied habitats on display. Naturally, game drives (including night drives) form the backbone of the park experience, but guided walks, specialised birding tours and boat cruises on forest-fringed Lake Ihema offer an entirely different perspective. Very unusually, travellers can even opt for the “behind the scenes” tour of the park headquarters, where they can talk to park officials and learn more about the strenuous business of keeping a national park operational. Cultural community experiences also provide the opportunity to learn more about Rwanda’s remarkable people while contributing to local enterprises.

Though Akagera is accessible year-round, the best time to visit is during the dry season, from June until September, when the wildlife viewing is at its best and rain is less likely to be disruptive. For the budget traveller, there are three public campsites: Shakani on the shores of Lake Shakani (where fishing is permitted), Mutamba at the highest point in the park and Muyumba overlooking Lake Ihema and Lake Shakani. Karenge Bush Camp is a good mid-range option, offering furnished tented accommodation. There are also three high-end accommodation options inside the park: Ruzizi Tented Lodge, Akagera Game Lodge and Magashi Camp.

When it comes to safari stereotypes, Rwanda is invariably associated with gorilla trekking, but in truth, this tiny country offers the full African adventure. Akagera National Park is the ideal complement to a gorilla trekking mission into Volcanoes National Park or a canopy tour of Nyungwe National Park. For those wanting to learn more about the bird and mammal offerings in Rwanda, Christian Boix’s (Africa Geographic director and one of Africa’s top birding guides) book Wild Rwanda is the region’s most authoritative “where to find” birds and mammals guide.

Everybody loves a comeback story, but it is even more uplifting when the main character is a vital piece of African wilderness. Akagera National Park is already unrecognisably improved from the ravaged land of twenty years ago  – proof that responsible tourism and sustainable conservation bring long-term security to both people and wildlife.

Read about the intricate link between conservation and community in Akagera National Park.

Read about the rise of tourism in Akagera National Park here.

Lions were reintroduced into Akagera in 2015. Read more about the occasion here.