Jewel of the Sahel

Zakouma National Park is one of Africa’s most recent examples of a park pulled from the brink that has rapidly returned to a vibrant and spectacular wilderness teeming with life and bursting with biodiversity. Africa’s remaining intact ecosystems are a marvel of circumstance, both ancient and modern, wild and human. They are often described as fragile – a label undoubtedly apt but overly simple. For although the survival of the continent’s wild spaces is never certain, they are fragile in the way that new leaves of a sapling are fragile. Given a chance, with the right resources and protection, history has proved nature to be remarkably resilient.

Complicated though its story may be, the complexity is compelling. Zakouma’s extraordinary recovery only adds to the appeal of a journey through this magnificent landscape. It doesn’t offer the most conventional safari experience, but for seasoned travellers looking for a once-in-a-lifetime adventure off the beaten track, Zakouma is perfect. 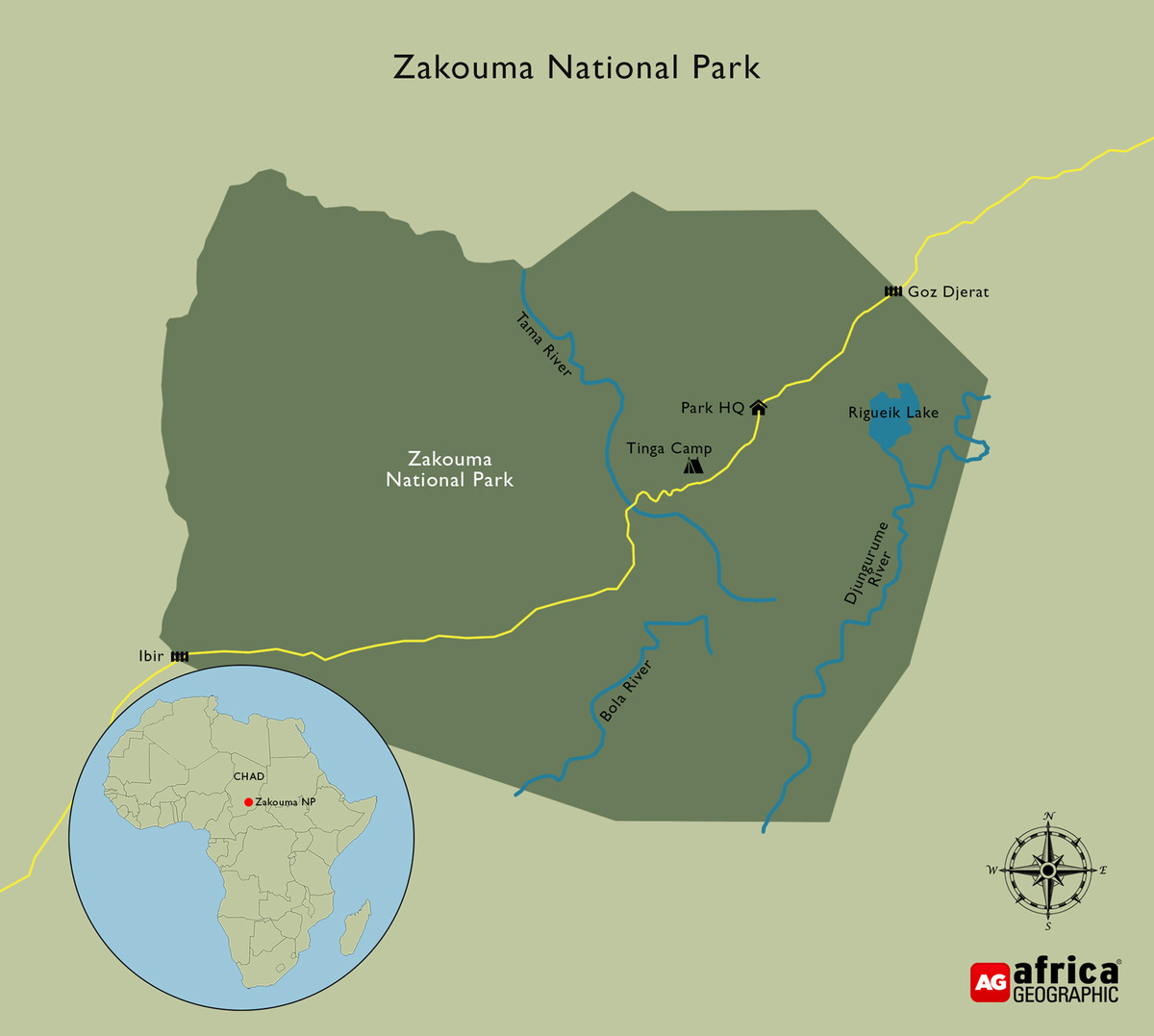 Zakouma National Park safeguards 3,000km2 (300,000 hectares) of savanna habitat, marking the transition between Africa’s central rainforests to the south and the inhospitable Sahara Desert to the north. It is situated in the southern part of Chad. As the country’s oldest national park, Zakouma’s fates and fortunes have been inextricably linked to human politics, bad neighbours and civil war. It was the arrival of African Parks at the invitation of the Chadian government that prompted the park’s gradual return to its former glory. The non-profit conservation organisation took over management in 2010 (in partnership with the government). In keeping with what is rapidly becoming an African Parks tradition, they set about protecting the remaining wildlife and working closely with local communities (which has been fundamental to Zakouma’s success) to the lay foundations for the park’s long-term survival.

For tourists, this means a safe visit to one of North Africa’s most precious ecosystems to revel in vast numbers of wildlife and spectacular scenery. The greater Zakouma landscape includes the national park and extends over an enormous 30,693km2 (over 3 million hectares) of Sudano-Sahelian vegetation (characterized by shrubland, tall grasses, and Acacia – now Vachellia – woodlands). This ecosystem includes the Bahr-Salamat Faunal Reserve (13,000km2 – 130,000 hectares), which surrounds the park, as well as Siniaka-Minia Faunal Reserve (4,260km2 – 42,600 hectares) and a further 10,000km2 of adjoining wildlife corridors. African Parks manages all of these protected areas. The reserves act as vital buffer zones while adding to the space available to burgeoning numbers of wildlife.

This vast ecosystem is primarily flat, with perennial river systems and marshy floodplains lined by patches of verdant gallery forest, woodlands, and savanna grasslands. The only exceptions are the granite inselbergs located in the southwestern section of the park. The vast area of available land allows the animals to survive the dramatic differences between the distinct dry and wet seasons – with a seasonal migration seeing many animals returning to the heart of the park when water is scarce.

Protected pachyderms and journeys of giraffe

It is the return of the park’s elephants that is perhaps most symbolic of the rehabilitation of Zakouma. Once whittled down by ivory poaching to fewer than 460 individuals, the elephant population has increased slowly but steadily over the last decade. This is a remarkable achievement in a part of the continent where most elephant populations are either extinct or in terrifying freefall. Perhaps even more astounding is the elephants’ capacity to offer what, to the human interpretation, looks somewhat like trust. The atrocities committed are easily within living memory for most herd members yet, while still occasionally nervous, they are sufficiently relaxed in the company of rangers and tourists to allow for intimate glimpses into their world. The elephants are breeding again – there are over 560 elephants in Zakouma, and the population is predicted to reach over 1,000 in the next few years. A baby elephant is always a joy to behold no matter the circumstances, but knowing the history of the park and the value of each youngster is guaranteed to make a sighting even more heartwarming.

Six black rhinos were also reintroduced to the Zakouma area in 2018. These population pioneers were the first to set foot in Chad since rhinos were exterminated over half a century ago. Sadly only two survived their first few months, the rest succumbing to the various strains of relocation. The remaining cows are constantly monitored and thriving. If Zakouma continues its upward trajectory, both white and black rhinos could once again move through its savanna habitats.

In addition to the growing number of pachyderms, Zakouma is also a population stronghold of the Kordofan giraffe, a critically endangered subspecies of the northern giraffe (Giraffa camelopardalis). Experts estimate that there are only around 2,300 of these giraffe left in Africa, and around 60% are found in Zakouma. Read more about Kordofan and Africa’s other giraffe species here.

Though the elephants are a highlight for most visitors, equally entrancing are the enormous herds of antelope and Central African savanna buffalo that roam the park’s plains. The antelope include rarities such as the northern greater kudu, red-fronted gazelle, Lelwel hartebeest, tiang (a type of topi), roan antelope and Buffon’s kob. You’ll also find Defassa waterbuck, oribi, Bohor reedbuck, duiker, and warthog.

Of course, this profusion of prey (and any number of suitable hiding places) makes Zakouma a predator haven. The three big cats – lion, leopard, and cheetah – are all present in increasing numbers, while a visitor might also see smaller species such as serval, caracal, jackal, and pale fox. Though African painted wolves (wild dogs) have yet to settle in the park, they have been glimpsed passing through it. Spotted hyenas are present in small numbers, their whoops and cackles a warning to their rare and silent striped hyena cousins also found in Zakouma. Few guests glimpse these shy, nocturnal creatures, but there is always the chance of becoming the first to snap a photograph of one inside Zakouma.

The mammal life is matched and possibly eclipsed by the park’s avifauna. Zakouma has 373 recorded species. The wetlands form part of the RAMSAR site “Inundation Plains of Bahr Auok and Salamat”, one of the largest RAMSAR sites in the world. These habitats are vital for migrating birds, which use them as stopovers or breeding grounds. The wetland areas attract enormous flocks of pelicans, storks, geese and black-crowned cranes, especially as the water starts to recede during the dry season and life concentrates around the remaining pools.

Away from the water’s edge, the arrival of the northern carmine bee-eaters decorates the skies in pink as they search for appropriate nesting sites in the sandbanks. The black-breasted barbet is at the top of the ‘Most Wanted’ list for most birders, the Abyssinian ground hornbill a close second. The latter can be heard at dawn, serenading visitors with a deep booming call that carries across the Sahel.

Zakouma is also home to what experts believe is the largest number of North African ostriches – a subspecies that is all but extinct in most of its historic range.

In Zakouma, the ebb and flow of life and animal movement is powered by the pulse of the wet and dry seasons. During the wet season from June to October, the park receives an average of 850mm of rain which inundates much of the park and floods the roads. Zakouma is closed to visitors during this period because it becomes almost inaccessible. The early dry season offers the best scenic photography as the surroundings are still green, but the later dry season ensures the best wildlife sightings. The temperatures regularly reach over 40˚C during the dry season, and there are sections of the park where tsetse flies congregate.

Tourism remains a vital part of African Parks’ strategy for Zakouma’s future. Visitors with a taste for adventure can rest assured that they are playing a role in protecting one of the continent’s most important ecosystems.

There are currently limited accommodation options in Zakouma: a couple of basic campsites and Tinga Camp – a basic and budget-friendly camp originally constructed in 1965. African Parks is currently working on tourism development options in Zakouma to improve the diversity of accommodation options available for both local and international travellers.

A Zakouma safari is not necessarily the best option for first-time safari-goers or families with young children. Yet, for some, the rustic accommodation, remote location and hot weather is exactly what make Zakouma sought-after – a truly unique, off-the-beaten-track adventure where their visit directly contributes towards an ongoing conservation success story.  Zakouma’s Lazarus-like recovery is nothing short of remarkable and has set it on the firm path to becoming one of the continent’s top (and most unusual) safari destinations.

Beyond the infinity pool – more about how African Parks transformed Zakouma