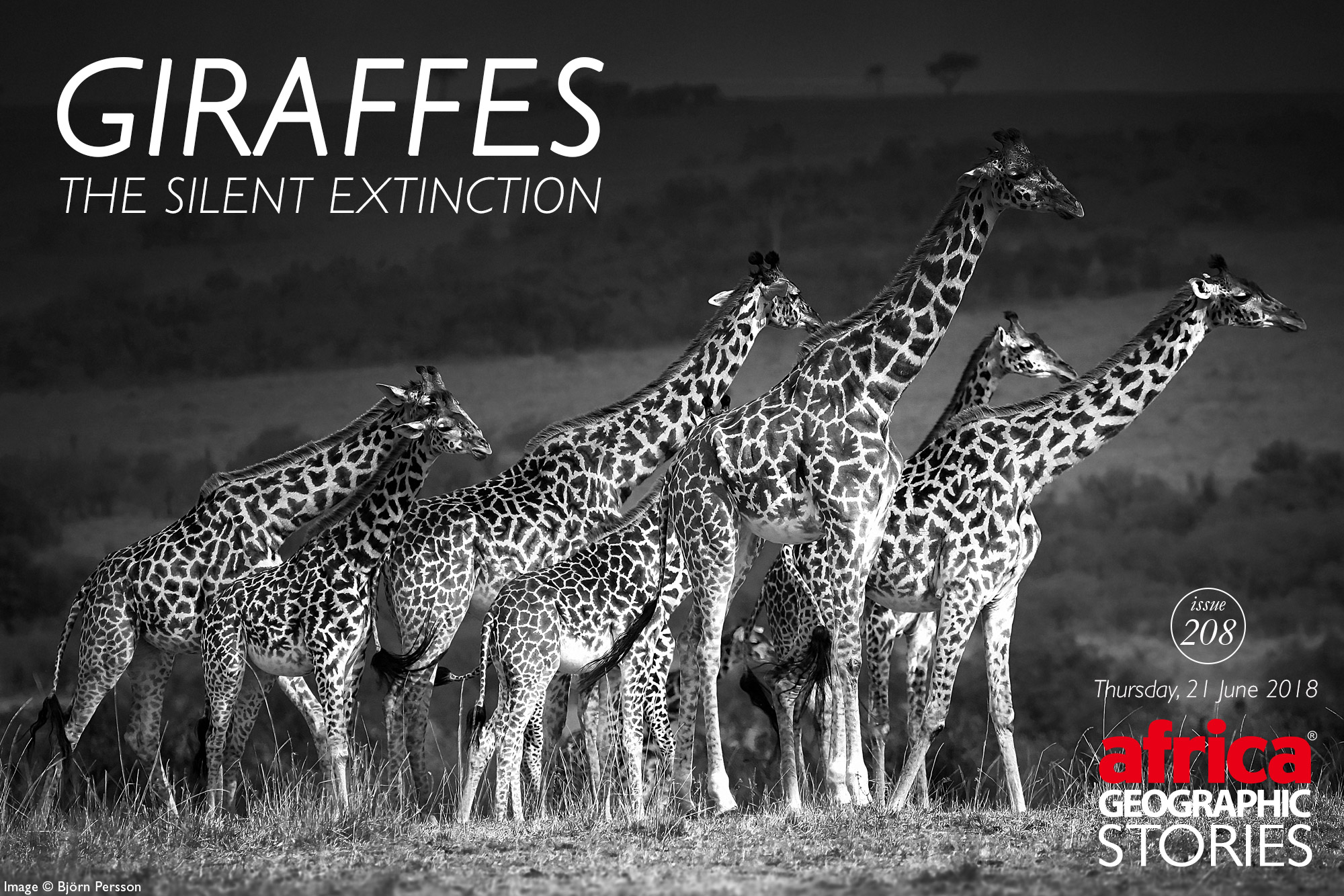 The giraffes of Africa – the long and short of it

It’s hard to comprehend that giraffe numbers have plummeted by almost 40% in just three decades. This rapid slide now places them amongst the most threatened species on the planet, with only approximately 98,445 (subsequently increased to 115,322) individuals remaining across this massive African continent!

A population collapse of this nature could conceivably be driven by that evil Far East cabal of wildlife traffickers that perpetuate myths about how wild animal parts can improve health, wealth and happiness. In this case, though, it would appear that the now-familiar threats of habitat loss, degradation and fragmentation coupled with human population growth and illegal hunting (poaching) are to blame.

I would imagine that its large size makes it difficult for giraffes to pass through dangerous human-occupied territory unnoticed, and surely the return for the effort of killing a giraffe is high, what with all of that meat on the hoof.

“We do not have any evidence of giraffe in traditional Chinese medicine, but in all honesty, a detailed trade assessment is required to understand local and potential international trade better. At this stage, we are aware of the bushmeat trade in different countries and the interest in tails as fly swatters (dowry for brides) in northern Kenya and DRC.” – Dr Julian Fennessy, Giraffe Conservation Foundation (GCF)

Here then, is a summary of what you need to know about the giraffes of Africa, with the information provided by the Giraffe Conservation Foundation (GCF). This is the long and the short of it.

Giraffes, as a species, are listed as ‘Vulnerable’ according to IUCN, which means that they are vulnerable to extinction in the near future. Updates for most of the currently recognised subspecies are under review by IUCN, with updated status assessments expected soon, in mid-2018.

There has been limited conservation effort and research on giraffes across Africa, and so, to aid conservation efforts going forward, GCF has compiled historical and current data on giraffe numbers, distribution and threats from across their range in Africa. This work has been undertaken collaboratively with African governments, NGOs, universities, IUCN and independent researchers.

There are four distinct giraffe species in Africa, and two of these species have two and three subspecies respectively. All live in geographically distinct areas across Africa and do not cross-breed in the wild (they have been known to do so in zoos).

The Masai giraffe is often noticeably darker than other species. Its blotches are large, dark brown and distinctively vine leaf-shaped with jagged edges, separated by irregular, creamy brown lines.

It ranges through central and southern Kenya and throughout Tanzania, with a geographically isolated population (potentially subspecies) in the South Luangwa Valley in Zambia. This Zambian population was previously mistakenly assumed to be Thornicroft’s giraffe, but they are genetically identical to the Masai giraffe. A small number have been translocated into Akagera National Park in Rwanda – outside of their natural range. Historically the most populous of the species, recent reports of poaching suggest that their population is decreasing. The population estimate is 32,500 individuals  (subsequently increased to 45,402).

The reticulated (or Somali) giraffe has brown-orange patches which are clearly defined by a network of thick and striking white lines. This species is found predominantly in central, north and northeastern Kenya, with small populations and range persisting in southern Somalia and southern Ethiopia. It has been estimated that about 8,700 individuals remain in the wild (subsequently increased to 15,985) – down from an approximate 31,000 as recently as 1998.

The southern giraffe has two subspecies with a combined population of 52,050 (subsequently reduced to 48,016):

1. Angolan giraffe (G. g. angolensis)
The Angolan giraffe’s pattern extends down the legs and is made up of large, uneven and notched spots against a white (or cream) to the tan-coloured background. This subspecies is found in most parts of Namibia, central Botswana and Zimbabwe. They went locally extinct in Angola until recent private translocations. Some have been translocated into DRC, South Africa, Zimbabwe, Nigeria and other parts of Botswana – outside of their natural range. The population is estimated at 13,050 individuals.

The South African (or Cape) giraffe’s pattern extends down the legs and is made up of large, uneven and notched spots on a background that is more tan-coloured than white or cream. This subspecies is found across South Africa, Botswana, northeastern Namibia, southwestern Zambia and some areas in Zimbabwe, with conservation re-introduction efforts into Mozambique. Previous extralimital introductions of this subspecies and of Angolan giraffe into their known range are likely to have resulted in hybrid populations in those areas.

There have also been introductions of South African giraffe beyond their natural range, in South Africa, Angola, Senegal, Swaziland and Zambia. The population is estimated at more than 39,000, making this the most populous species.

The northern giraffe has three subspecies with a total population of 5,195 (subsequently increased to 5,919):

1. Kordofan giraffe (G. c. antiquorum)
The Kordofan giraffe’s spots are pale, large and rectangular. It has no markings below the hocks. This species is found in some of Africa’s more unstable areas: southern Chad, Central African Republic, northern Cameroon, northern Democratic Republic of Congo and western South Sudan. Most of these populations were previously incorrectly assumed to be G. c. peralta. The population is estimated at 2,000 individuals.

2. Nubian giraffe (G. c. camelopardalis)
Nubian giraffes have large, rectangular blotches set irregularly against a cream background. The lower legs are noticeably white and not patterned. The Nubian giraffe has the same Latin name as that of the entire species because it was the first specimen recorded. Recent research has shown that the two subspecies, previously known as Nubian and Rothschild’s giraffe, are actually genetically identical, and so Rothschild’s giraffe has been subsumed into the Nubian giraffe. This subspecies ranges across eastern South Sudan (information about large herds unconfirmed), western Ethiopia, northern Uganda and west-central Kenya. The majority of Nubian giraffe in Kenya are outside their natural range.
In 2015 and 2016, Nubian giraffes were (re-)introduced into Uganda’s Lake Mburo National Park and the southern bank of the Nile River in Murchison Falls National Park respectively after an absence of 100 years or more. The population is estimated at 2,645 individuals.

3. West African giraffe (G. c. peralta)
The West African (or Nigerian) giraffe is noticeably light in appearance, which rectangular tan blotches separated by thick, cream-coloured lines, often with no patterning on their lower legs. After being widely distributed at the beginning of the 20th century from Nigeria to Senegal, this subspecies now inhabits an isolated pocket east of the Niger capital of Niamey, sharing their living space with local villagers. No other large wild mammals remain in this region. By the 1990s, only 49 individuals remained, and after direct intervention by the Niger government, their number has risen to approximately 550 individuals (and counting).

ALL SPECIES AND SUBSPECIES IN NUMBERS

The Giraffe Action Fund (GAF) is an exciting GCF initiative that aims to secure and increase current numbers and distribution of giraffes throughout their range in Africa. Their action plan includes securing additional habitat, anti-poaching efforts as well as conservation education and awareness. In the last year alone, more than US$500,000 has directly gone to support partners efforts in giraffe conservation and management efforts.

Below is a series of photos showing Operation Twiga in full swing.

Starting top left: The giraffes are darted and captured (1) to have a blindfold and ropes attached (2 & 3) and data recorded (4), before being woken up and led into a high-sided truck (5) for transportation (6) to a boma (7). They are then loaded into a larger truck for ferrying across the Nile River (8) before being re-released. All photos © Giraffe Conservation Foundation
Note: In image 3, GCF director Julian Fennessy sits on the giraffe’s neck to ensure that the awake giraffe cannot get to its feet. This does not harm the giraffe in any way. 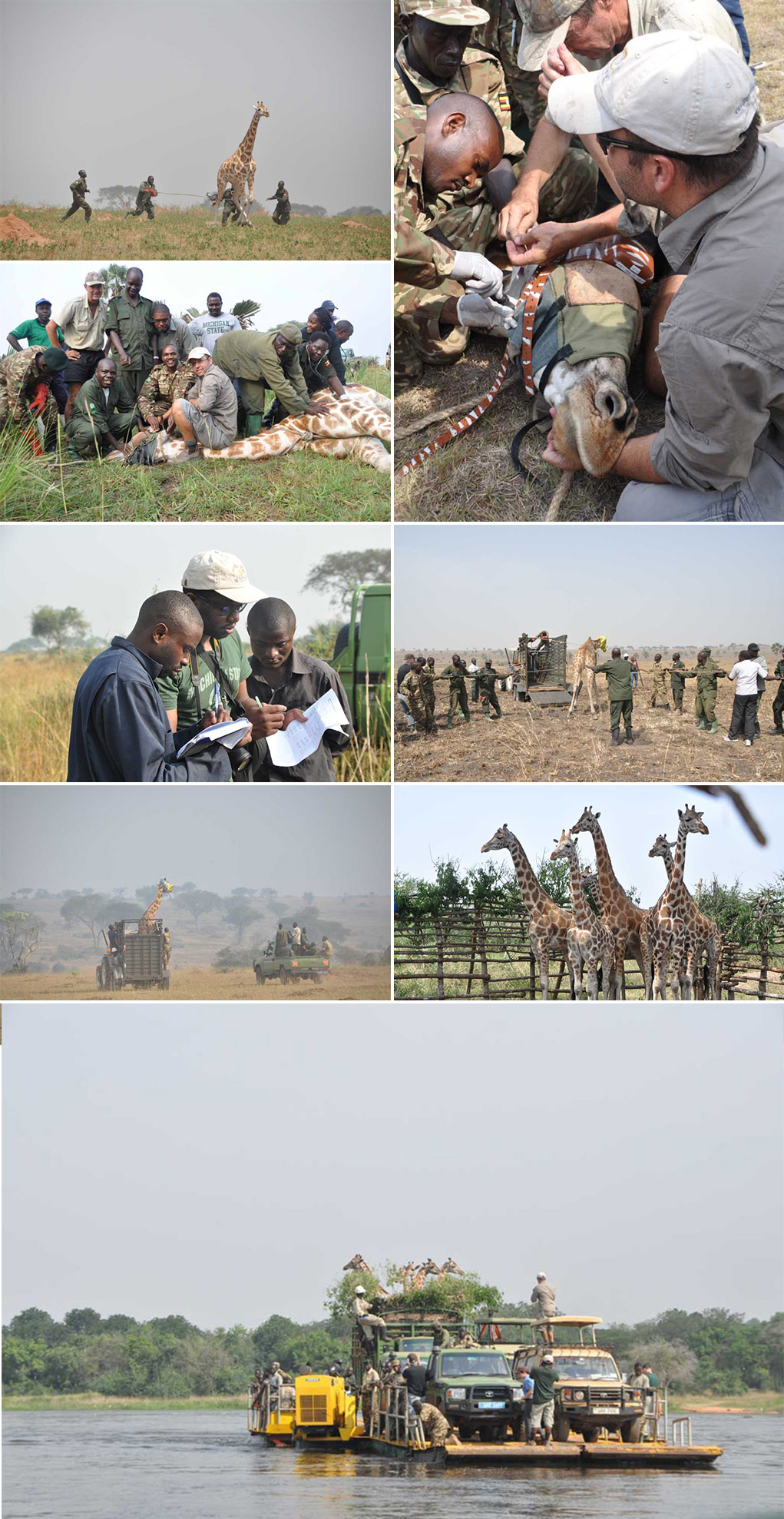 Who is Giraffe Conservation Foundation (GCF)?

Also, have a look at the documentary that by BBC and PBS, narrated by Sir David Attenborough, about the work of GCF across Africa to save giraffe: Giraffes: Africa’s Gentle Giants.

HOW CAN YOU HELP?

The best way to help giraffes is to make a donation, no matter how small. Cash makes a huge difference because it fuels everything you have just read. To make a real difference for giraffes, make a donation here.