Yes or no – boycott tourism lodges in Greater Kruger because of neighbouring trophy hunting operations?

Posted on July 4, 2019 by Simon Espley in the Opinion Editorial post series. 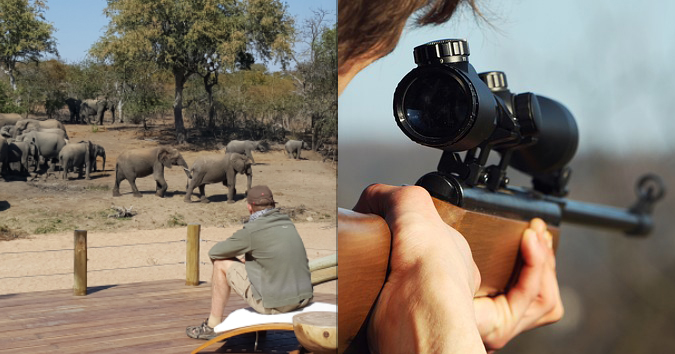 Some people call for boycotts of tourism lodges in the Greater Kruger, because some landowners make use of trophy hunting to fund their costs.

The 320,000 ha Greater Kruger is one of Africa’s great conservation success stories.

This vast area is a collection of private and indigenous community-owned reserves (each made up of multiple properties, some as small as 20ha) that have removed internal fences and share unfenced borders with the Kruger National Park, thus forming a vital buffer between the national park and the commercial farms and human settlements to the west.

Some landowners within the Greater Kruger utilise trophy hunting to generate funding for their escalating anti-poaching and other costs. Other landowners utilise tourism for this purpose, and some have no commercialisation at all (they personally fund the costs). The use of trophy hunting in Greater Kruger to generate much-needed funds is a controversial issue, and my view on the topic is no secret. I am no fan of the trophy hunting industry – largely because of how its members behave and the impact they have on the diminishing numbers of big-gene animals remaining in unfenced areas.

But the call to boycott tourism lodges because of trophy hunting on neighbouring properties makes no sense. Please let me explain why I hold this view:

The trophy hunting and tourism operators compete with each other to utilise land in the Greater Kruger. I do not know of one tourism operator that also offers trophy hunting – and I would certainly boycott them specifically if that was the case. By boycotting the tourism operators, you are by implication, threatening their commercial viability. Put simply, if enough people follow your lead, those tourism operators will go out of business. Remember that the need to pay conservation and anti-poaching costs remains, so if tourism is removed from the table, the landowners will either look to trophy hunting to fund those costs, or they will put fences back up and farm livestock or crops (in which case the land available for Kruger wildlife will shrink).

Looking at this from a different angle, by boycotting tourism in this area you are effectively supporting the trophy hunting operators, who will step into the gap created by the demise of the tourism operators, thus expanding their footprint.

Surely the best way to remove trophy hunting as a conservation funding option (if that is your mission) is to make photographic tourism operations so successful that trophy hunting pales by comparison and is therefore ignored by land owners? Let market forces prevail!