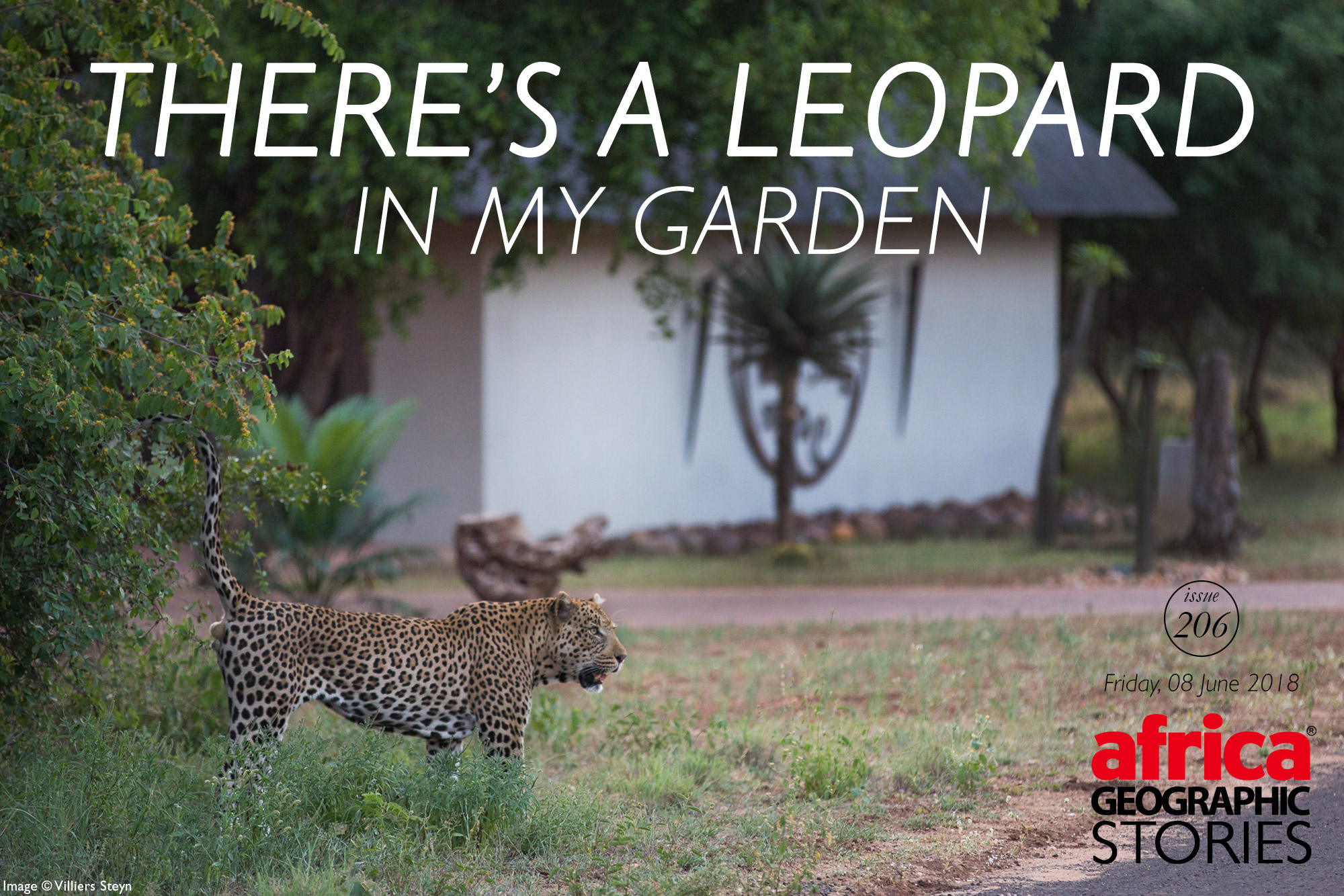 One of the most popular requests from safari tourists to their guides is to see leopards. This is a tough task, even for the most experienced of guides, due to the elusive and cunning nature of these big cats. But there is a town called Hoedspruit, near the Kruger National Park in the Limpopo Province of South Africa, where having leopards in your garden is, well, the norm.

The residents of Hoedspruit Wildlife Estate (HWE), a fenced lifestyle ‘suburb’ of this bushveld town, are blessed with regular sightings of leopards. Fences pose no problems for these lithe felines as they come and go at will.

HWE is 680ha in extent, with half consisting of undeveloped bushveld and the other half consisting of residential homes. Various species such as impalas, giraffes, wildebeest, zebras and warthogs call this estate home, as well as a host of smaller species such as mongooses, genets, porcupines and civets. And then there are the predators that come and go at will, often making use of holes dug under the fence by aardvarks and warthogs.

We asked HWE resident and confessed leopard junkie Villiers Steyn a few questions about what it is like to live with leopards in your garden:

Africa Geographic (AG): Let’s get to the scary bit first, have people been attacked by leopards in HWE, and how do you stay safe while out walking in the estate?
Villiers Steyn (VS): I’m not aware of any attacks on humans. They have, however, surprised quite a few residents by suddenly appearing in their gardens. My wife and I have been lucky enough to encounter them on foot, and I’ve even cycled past one as well. I believe it’s perfectly safe to walk around the estate during the day, but I wouldn’t recommend walking alone at night.

AG: Based on anecdotal evidence, leopards seem to target and eat dogs – how do you keep your pet dogs safe?
VS: Leopards have attacked and eaten dogs on the estate. It infrequently happens though because residents are continually being made aware of the risks in estate correspondence. The rule is simple – keep your dogs inside the house when it’s dark; otherwise, they might become leopard food. In fact, we don’t even like leaving our dogs alone outside during the twilight hours, because leopards are very active around sunrise and sunset.
Leopards easily jump over the small fences to get into gardens and wouldn’t hesitate to grab Fluffy where he’s taking a nap on the porch! Dogs are not allowed off the lead when they’re being walked in the estate and walking them at night is looking for trouble…

AG: How often do residents report leopard sightings and are the leopards relaxed with humans in the vicinity?
VS: When we first moved to HWE in 2013, there was a massive male called Big Boy that was frequently seen by residents. My wife and I would jump in the car every time we heard monkey or impala alarm calls nearby our house, and more often than not, we’d find Big Boy. He would casually walk between houses and cars, and even drink from our birdbath!

Thanks to spot pattern analysis, a local guide identified him as a leopard that grew up in the nearby Thornybush Game Reserve, hence his relaxed demeanour around vehicles and people. Unfortunately, he disappeared in mid-2015, perhaps due to a territorial dispute with another leopard, Houdini, who took over as the dominant male in the area.
The rest of the leopards that frequent HWE are much shyer than Big Boy. They are hardly ever seen during the day, but if you’re lucky to catch a glimpse of one of them at night, they’re less likely to dash away into the thickets as they do when the sun is up. Sometimes months go by with no leopard sightings, but recently a female leopard, Kulua, and her two cubs were seen in the same area six days in a row. She must have had a kill in the vicinity.

AG: How many leopards frequent HWE, and do you have any population dynamics?
VS: Over the past five years, I’ve identified 15 individual leopards on HWE – four adult males, three adult females, seven cubs and one unknown individual. Some have come and gone, and others have successfully defended their territories here for many years.

The leopards certainly don’t live on the estate permanently. Their movements take them beyond the estate boundaries into neighbouring game farms and the Greater Kruger National Park.

Currently, HWE is dominated by one massive male we call Houdini. Two adult females, Kulua and Nsuku, are also regularly captured on camera traps, and both have cubs. Kulua’s two cubs are close to a year old, and Nsuku’s cub is closer to six months old. It is difficult to age the cubs because we hardly ever see them and they seldom show up on camera trap photos. We do know that one of Kulua’s current litter is a male. Her previous litter consisted of a male and a female (Mafu and Mila), both of which survived to adulthood, and Nsuku raised a male cub (Ntambo) successfully in her previous litter.

AG: What species do the leopards prey on in the estate?
VS: Much of the hunting happens at night, so it’s tough to say precisely what the leopards prey on in the estate. I have, however, followed their tracks and drag marks to carcasses of duikers, waterbuck calves and impalas. I’m sure they also catch a lot of small things like francolins and guineafowl, of which there is no shortage. Interestingly, the leopards don’t hoist the carcasses up into the trees like they usually do – perhaps this is due to the low number of competitive predators and plenty of dense shrubs to hide the carcasses under.

AG: How do leopards enter or leave the estate, bearing in mind the electrified game fencing?
VS: The leopards crawl underneath the fence at various points along the boundary where warthogs and other creatures have dug holes. These become little highways in and out of the estate for a variety of creatures – including genets, civets, honey badgers, porcupines, spotted hyenas and even wild dogs and aardvarks! I often place camera traps at these points.

AG: Are HWE residents proud of having leopards in the estate?
VS: Yes! The residents are very proud of having leopards on the estate and show incredible interest in the camera trap photos and videos I post and the short reports I write from time to time. Some of us are members of WhatsApp groups that alert each other when we see one so that everyone can come out and enjoy the sighting.

AG: Concluding thoughts?
VS: Many people think it’s “strange” or “amazing” that leopards and so many other beautiful creatures live amongst people here in the estate. If you ask me, it’s perfectly normal. I don’t look at it as animals living in a suburb, but rather as humans that live in the bush. Their numbers and behaviour here in the estate are probably very similar to what it is in the neighbouring reserves. The only difference is, we’ve built our houses in their home ranges. 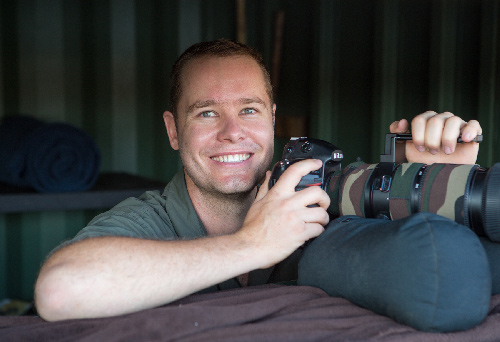 After completing a diploma in Nature Conservation, Villiers Steyn studied the movement patterns of leopards in Botswana’s Mashatu Game Reserve as part of his Master’s Degree. Following that, he crisscrossed southern Africa for six years as a freelance travel writer for some of South Africa’s leading travel magazines, focusing primarily on wilderness areas. Today he’s based in Hoedspruit where he makes a living as a professional photographer and photographic safari guide. Follow Villiers as the Safari Expert on Instagram and Youtube. 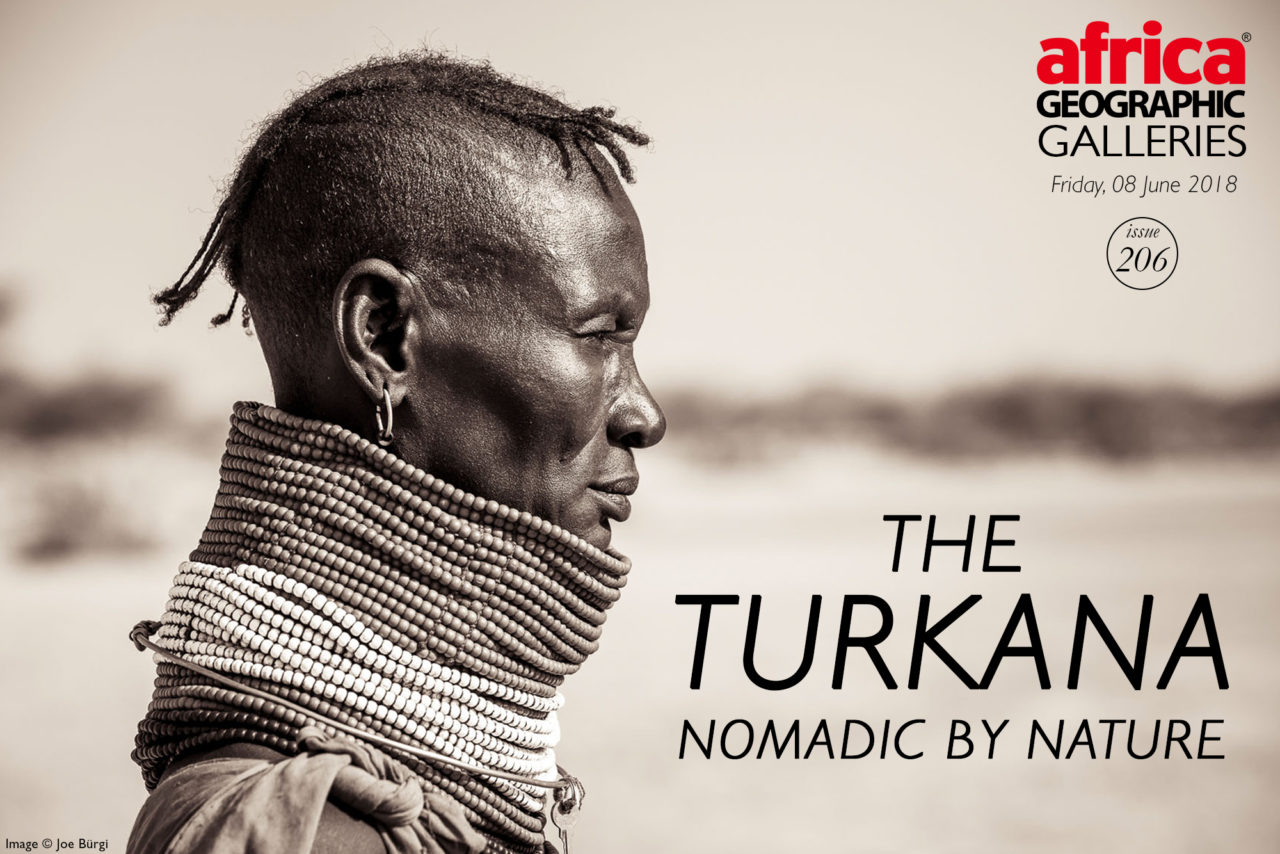 The Turkana – Nomadic by Nature
Joe Bürgi and his wife, Ursula, are perennial travellers and photographers from Switzerland. Their passion for the exploration of off-the-beaten-track destinations has allowed them to compile a catalogue of unique photos that tell inspiring, eye-opening stories of remote tribes that are largely unknown to the rest of the world.
In this gallery, we showcase a series of photos of the nomadic, pastoralist Turkana tribe in northern Kenya. These photos are a true reflection of the raw, harsh environment that they inhabit, and the pride that they possess is a testament to their cultural beliefs. It is astonishing, enthralling and above all, real.