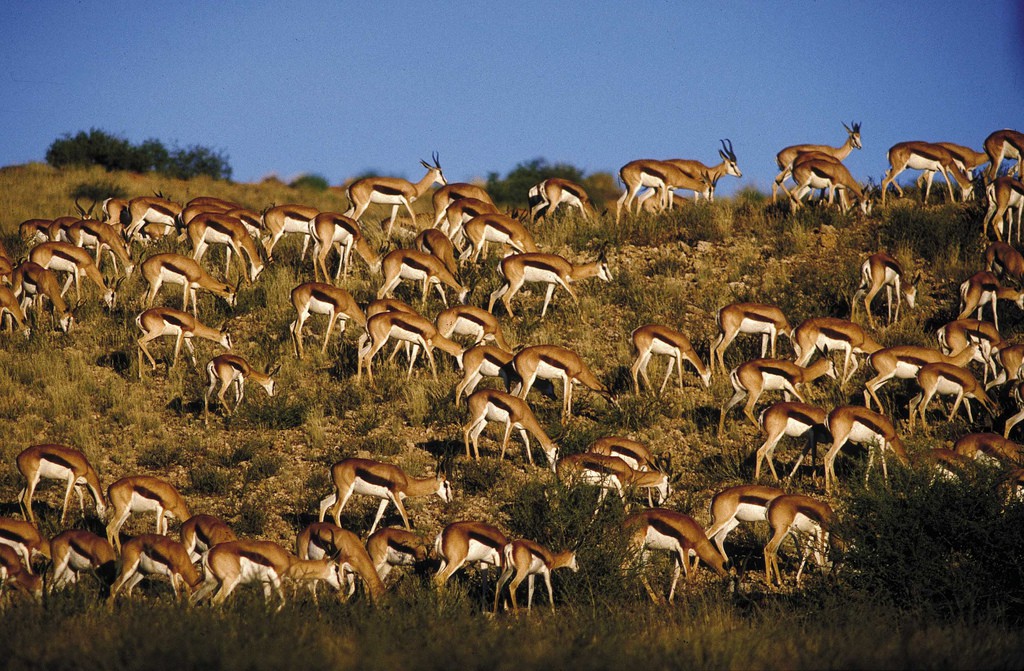 Gert van der Merwe’s personal account of the great springbok migration is told in Lawrence G. Green’s book Karoo. Towards the end of the 19th century, Gert’s family moved their sheep and cattle between decent grazing lands, helped by their shepherds and a San wagon leader who must have previously experienced the migration. “The trek buck are on their way, and we’ll be trampled to death if we stay in the riverbed,” he warned when only a cloud of dust was visible in the distance.

The party heeded his advice. They cut down thorn trees and arranged a barrier of piercing spears around the wagon and oxen, hoping the thorn rampart would divert the springbok’s course. Pyres of dry grass and green sticks were prepared. The fire and smoke would act as a further line of defence against the charging horde. The springbok were around three miles (five kilometres) away when Gert heard the stampede for the first time. Until then, he’d only been able to see the plume of dust caused by the throng of tiny feet. Small animals like meerkat, jackal and other species were already instinctively seeking refuge. Gert’s party lit the fires and waited as the terrifying yet awe-inspiring sight approached.

The frontrunners veered around the hill, avoiding the thorn and fire defences, but the springbok tsunami could only be held off for so long. Soon they collided with the defences, and the injured and fallen were often trampled by others. When the barrier could take it no longer, the springbok ran among the cattle that joined the rampage.

Gert claims that the dust cloud was so thick it became hard to breathe. His wife covered their children with blankets in a desperate attempt to prevent them from being smothered. It took around an hour for the bulk of the herd to pass. Stragglers and wounded animals tried to catch up for some time afterwards. Gullies in the veld filled with the carcasses of dead springbok. It sounds impressive, but ‘majestically’ doesn’t sound like the correct word to describe the way they swept across the plains.

The most recent migration took place in 1896. Since then, hunting, roads, fences, urbanisation, farming and other human developments have wiped it out. It is doubtful whether Gert and his group would have dreamed that the springbok migration would be totally annihilated within a few years of their experience. Perhaps the collapse of the sardine run in our lifetime might appear as unlikely to us as the demise of the springbok migration would have to Gert.

We’ll never know the full biological intricacies behind this migration as it was never scientifically studied. Today, it’s neither practically possible to reconnect the immense tracts of land that have been bisected by roads and fences, nor to recreate the springbok’s complex natural behaviour.

Conservation strategies need to move within the realities of human land use. The Mountain Zebra–Camdeboo Corridor Project realises that fact. The project’s aim is not to drop fences, dig up roads or change land use, but to preserve the veld. Early indications are that this unique partnership between landowners and national parks could be a model project for the future.

David Johnson has a focus: the impacts of human population and consumption growth. “It’s the growing number of us humans and the amount we consume which is the greatest threat to maintaining healthy ecosystems. You can worry about climate change mitigation, but when there are twice as many of us, can those mitigation measures be effective? For marginalised rural communities the situation can be worse, they often rely on healthy ecosystems for food, water, medicines, fuel and livelihoods” he says. With the population of Africa expected to double by 2050, David believes a new approach to conservation is needed. In partnership with the Endangered Wildlife Trust and NGOs specialising in voluntary family planning, women’s rights, early childhood development and job creation, David is seeking funding for a new style of integrated programme, which will lead to greater community and environmental benefits than had those organisations acted alone. You can read more of his work on his website and follow him on Twitter: @DavidJohnsonSA