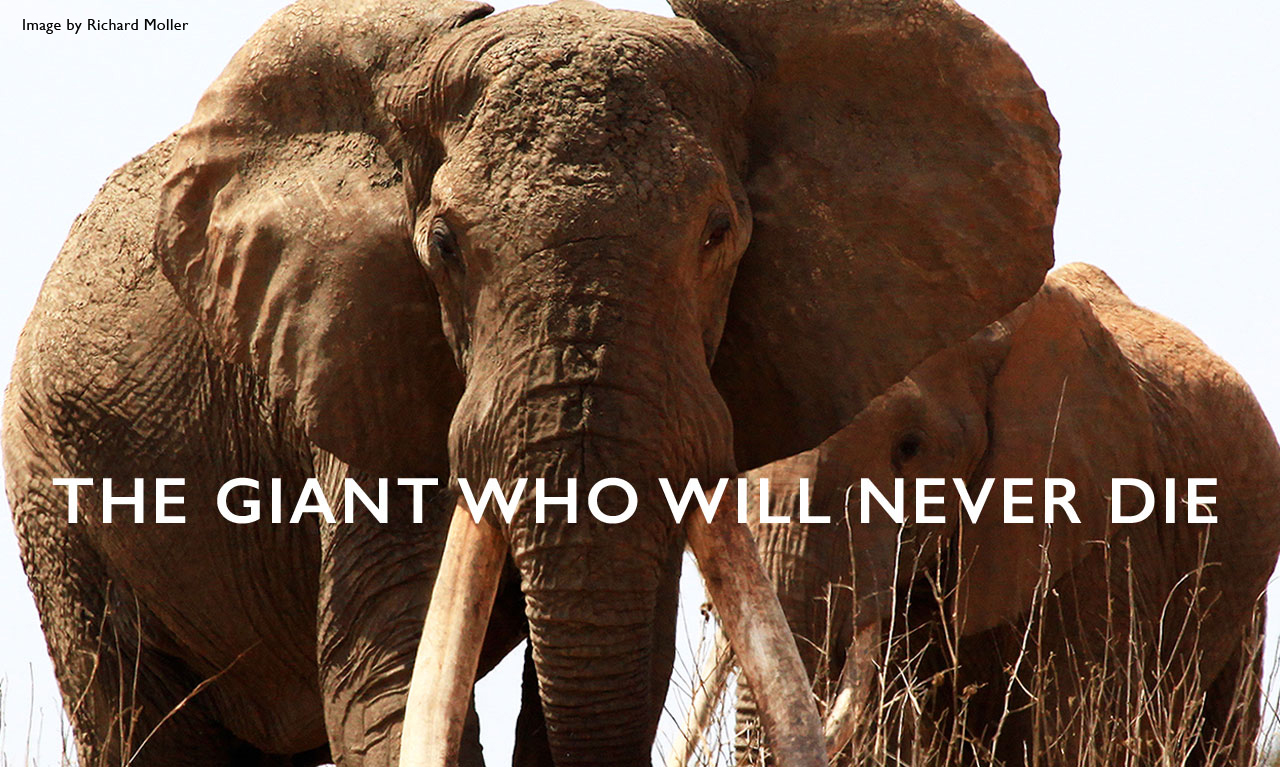 HOW SATAO, KENYA’S LEGENDARY TUSKER, IS A SYMBOL OF HOPE IN THE FIGHT AGAINST POACHING

The battle of David and Goliath was far from a fair fight. The minute the shepherd boy entered the fray, the giant was doomed. Goliath had prepared for hand-to-hand combat, encumbering himself with heavy armour, short-range weapons and a shield. But the nimble shepherd remained at a safe distance, slung a rock and potted the giant with the same practiced aim he used to dispatch predators of sheep. For David, killing Goliath was no triumph.

There was a giant in Tsavo infinitely wiser and more resilient than Goliath. His name was Satao. When he finally succumbed to a poisoned arrow in late May, he was probably 50 years old – above average age for a bull elephant in this highly poached region. Indeed, there was nothing average about him.

Given his age, Satao would have been born in the mid-1960s, a time when elephants wandered Tsavo in numbers never seen since. It was their era. His genetic make-up would have been the best possible. The herd would have been nurturing and protective of their little protégé. But it wouldn’t be easy for him.

He grew up during one the most devastating droughts the region ever experienced. It decimated the herds, taking thousands of his kind – mainly females and juveniles like him. But the little trumpeter endured like the strong bulls that towered over him.

Soon after the drought, the poachers took to killing those bulls for their immense tusks. He would have seen it, smelt the carcasses, seen the remnants of their hacked skulls devoid of ivory, and perhaps he learned. And when the bulls became fewer, and those that remained hid deeper in the wild, the poachers targeted females, and then the likes of him – small tuskers yet to pass on their good genes. For two decades he survived. By the time Richard Leakey declared war on poaching in 1989, the Tsavo elephant population, which had been as large as 42 000 in 1969, had been reduced to 6 000. Satao was one of them.

The poaching onslaught intensified, and still he endured for two decades more, through more droughts, and through more poaching despite his magnificent tusks that grew and grew, and weighed him down with their sheer bloody value. And he may have known that these would be his downfall – that a human would try to bring him down with devious weapons. They tried and tried. They tried again in February this year. Their poisoned weapon pierced his thick skin, despite his armour of mud. And still he survived. And when we thought Satao might just be invincible, he finally succumbed to an attack in which the odds were stacked against him.

We have lost a giant so grand that the soil encrusting his back was a world entire. His tusks were so glorious that they stretched back to the time of the mammoth. But his legacy needn’t die. In his time Satao would have sired many more of his kind. His strong genes live on in the herds of Tsavo, and it’s up to us to ensure that his progeny reach his incredible stature. If we don’t, we will be left with nothing but a dusty legend.

What you can do:

Support The Tsavo Trust. One of the Trust’s core initiatives is their Large Elephant Monitoring Project set up to protect Tsavo’s magnificent ‘hundred pounders’. The Trust also adopts a holistic approach to the challenges facing Tsavo by addressing both wildlife and community issues. Click on the logo to visit the Tsavo Trust support page: