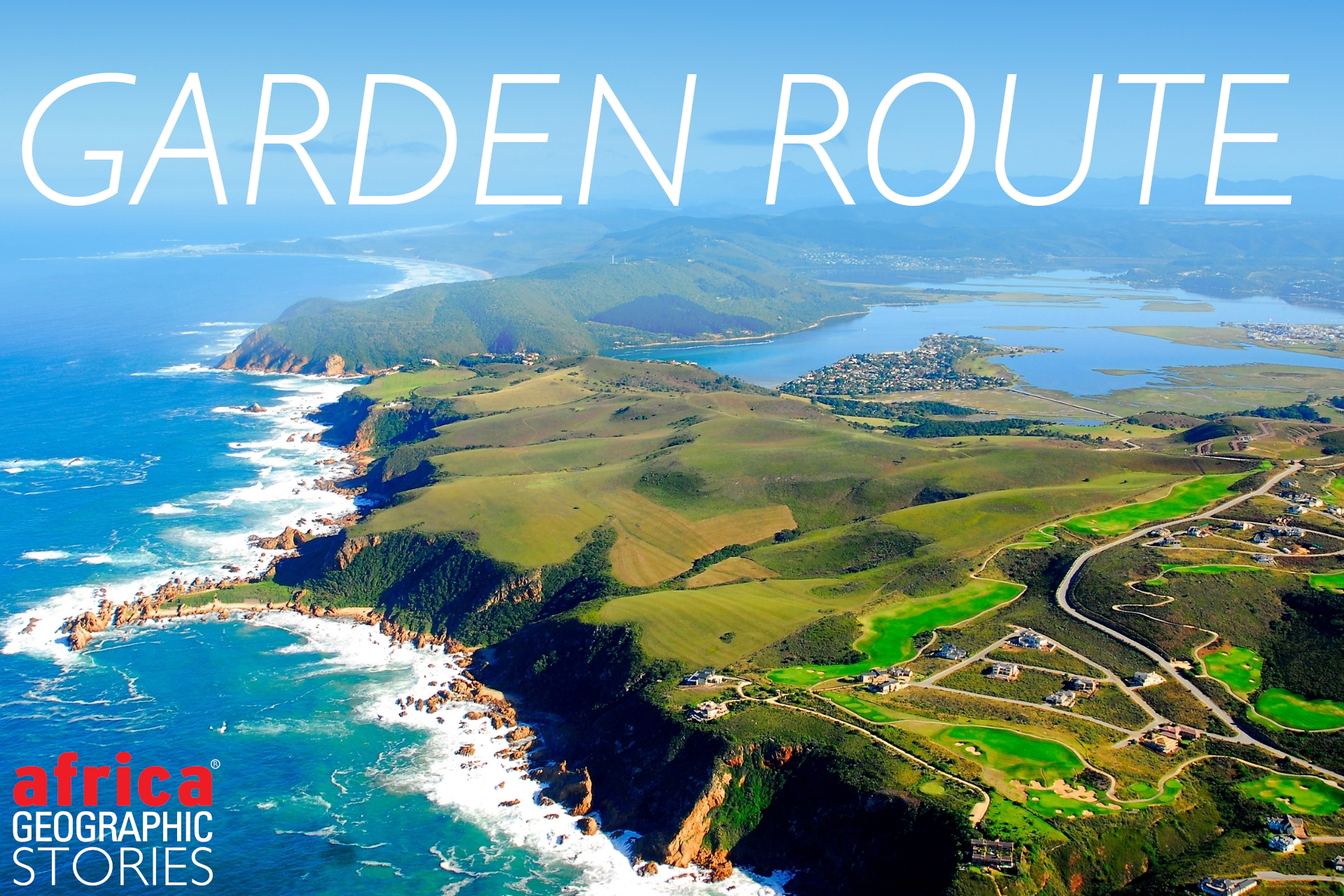 If the whole world is indeed a garden, as Frances Hodgson Burnett once wrote, then the Garden Route of South Africa was cultivated by a maverick horticulturist. In truth, the name is somewhat misleading because the Garden Route is about as far from the average garden as could conceivably be imagined. Here, myriad landscapes culminate in a dramatic meeting of mountains, gorges, forest and the Indian Ocean, interspersed by quaint towns and bustling beach cities. Not for nothing is this glorious stretch of coastline one of South Africa’s most popular tourism hotspots – it is a region best explored at leisure, taking every moment to appreciate nature in her wildest glory. 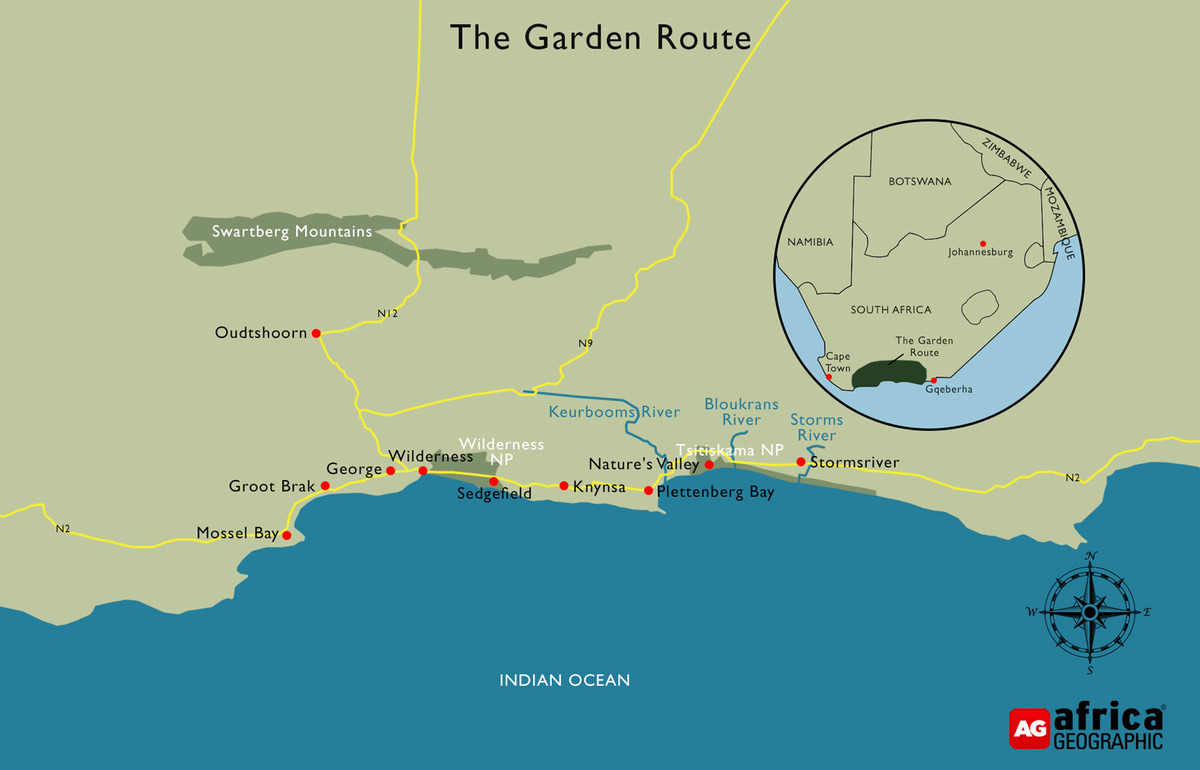 What is the Garden Route?

In truth, neither “garden” nor “route” are particularly accurate descriptors, though the moniker has proved such an effective marketing tool that nearby towns clamour for (or simply claim) inclusion. Although the exact boundaries differ depending on the source, the Garden Route generally refers to an area that extends from Mossel Bay in the Western Cape, east to the town of Stormsrivier in the Eastern Cape – a straight-line distance of around 200km. Inland it encompasses the town of Oudtshoorn right up to the Swartberg Mountain Range. This magnificent region includes rugged patches of coastline, pristine sandy beaches, forests, mountains, gorges, lakes and rivers, all easily and quickly accessible. At the right time of year (August/September), many sections are covered in a glorious carpet of flowers, only adding to the beauty of the surroundings.

Visitors can select a base from Olde Worlde towns and explore the extraordinary scenery day by day before rewarding themselves with an evening of fine dining or perhaps an afternoon at a picturesque wine farm. With the added advantage of several malaria-free nature reserves and national parks in the vicinity to tack on a safari adventure, a trip to the Garden Route can be individually tailored to every need – from families with small children and sedate couples to intrepid solo travellers and adventure seekers.

Mossel Bay is a town steeped in history and marks the spot where the very first European set foot in South Africa. Portuguese explorer Bartolomeu Dias stopped here in 1488, searching for fresh water to replenish his ship’s supplies. As he was to discover, the land was already occupied. In a sad portent of this region’s future race relations, one of Dias’ men shot a Khoikhoi herder with a crossbow. Unsurprisingly, the locals reacted with anger and sent the mariner and his scurvy-riddled sailors scuttling back to their ship in a hail of stones. Human history in the area goes back considerably further than Dias’ misadventure. The caves below Pinnacle Point contain some of the earliest artefacts of modern man – believed to be about 164,000 years old. These Middle Stone Age people could not have chosen a more picturesque home; the caves look out on the turquoise of the Indian Ocean below.

These days, visitors to Mossel Bay visit the cave networks and admire the view before visiting the museum complex to explore the full-sized replica of Dias’ ship. Though the coastline is relatively rocky here, a couple of stunning beaches and sheltered coves are perfect for swimming in the warm sea. The quaint St Blaize Lighthouse is a popular attraction and serves as a landmark for some of the region’s popular hiking routes. There is also a Seal Island (smaller than the one close to Cape Town) where Cape fur seals gather in enormous numbers.

One of South Africa’s oldest towns and once a historic timber hub, George is nestled in the sublime Outeniqua Mountains, just eight kilometres from the ocean. As one of the Garden Route’s largest towns, it is sometimes nicknamed the “Gateway to the Garden Route” and sports a curious mixture of big city vibrance and small-town atmosphere. There are several historical landmarks to appreciate, including an ancient English Oak tree called The Slave Tree, the King Edward VII Library, the Outeniqua Transport Museum and several old churches. The Garden Route Botanical Gardens, which exclusively showcases the unique vegetation of the southern Cape fynbos, are also situated in George.

The various scenic drives around the town, including Montagu Pass, will reveal unexpected antique shops, art galleries and craft stalls, while golf enthusiasts can enjoy a round at some of South Africa’s premier courses.

To the north and inland from George, the town of Oudtshoorn marks the northern boundary of the Garden Route region. Here the vegetation has changed from the iconic fynbos of the Cape coastlines to the sparse Klein Karoo, at the meeting point of the Swartberg and Outeniqua Mountain ranges.

Offering the usual rural town charm so characteristic of the Garden Route’s urban areas, Oudtshoorn is also home to the largest farmed ostrich population in the world. This tradition goes back to the days of the Ostrich Feather Booms of the late 19th century/early 20th century, which saw the rise of “feather barons” and dynasties that built the mansions lining the Grobbelaars River. Before World War 1, ostrich feathers were South Africa’s fourth-largest export and worth almost their weight in diamonds. Today, ostriches are farmed for their meat and feathers and continue to be a major tourist attraction.

Just outside Oudtshoorn are the Cango Caves, enormous limestone caves with massive stalagmite formations, some of which date back 4,5 billion years!

In keeping with Garden Route naming tradition, Wilderness is less “wilderness” and a more tranquil seaside town, situated on the banks of the Touw River Lagoon. It is, however, surrounded by true wilderness in the form of the nearby Wilderness National Park, which protects over 2,500 hectares and encompasses forests, five rivers, five lakes, two estuaries and a stretch of coastline. Though usually still referred to as Wilderness National Park, since 2008, it is technically the Wilderness section of the Garden Route National Park which also includes the Knysna Pools and Tsitsikamma sections (see below).

Wilderness National Park is a paradise for campers, hikers, kayakers, mountain bikers, paragliders, abseilers and kloofing enthusiasts. The magical forest paths wind their way to various waterfalls. They are filled with the calls (and occasional glimpses) of kingfishers and the colourful Knysna turacos (or ‘loerie’ if chatting to a local). The coastline section comes to a head at Dolphin Point, which, like much of the Garden Route, is a great place to look for southern right whales during their annual migration (from July until early November).

Not far from Wilderness, en route to Knysna, is the seaside village of Sedgefield – an excellent spot for families looking for a quieter seaside holiday – and the Goukamma Nature Reserve, which protects an extensive vegetated dune field.

The original route between George and Knysna is the historic Seven Passes Road which crosses over ten rivers and seven gorges and provides a taster of the exquisite scenery awaiting keen explorers. As beautiful Southern African towns go, Knysna is near the top of a very long and competitive list. Situated on the banks of a picturesque lagoon that is part of a protected marine reserve and surrounded by lush indigenous forests, Knysna is renowned for its dynamic charm and genial hospitality. The Knysna River feeds the warm water estuary. It passes between two prominent headlands –The Heads – creating an occasionally treacherous narrow strip for boats to pass through as they head for the open sea.

The town is surrounded by temperate forests that hide what ecologists believe to be the last remaining elephant of the Knysna/Tsitsikamma region. The cow is thought to be around 45 years old and is the sole survivor of the effectively extinct southernmost population of elephants in Africa. Centuries of persecution have genetically programmed her to be understandably wary of humans, and actual sightings of her are few and far between. Most of what we know about her movements come from tracks, dung and camera traps as she haunts the ancient trails of the fairy-tale forests and surrounding farms – a lonely and poignant figure.

Her ancestors, which experts estimate probably numbered around 3,000 individuals in the 18th century, would have wandered far and wide through the dark and mysterious forests and surrounding habitats. Though the elephants are long gone, parts of their historic range are protected by the Garden Route National Park: a disconnected amalgamation of the existing Tsitsikamma and Wilderness National Parks, the Knysna National Lake Area, and various other protected tracts of state land.

The Garden Route National Park covers patches of the south coast between George and Port Elizabeth. Its magnificent forests are characterised by giant Outeniqua yellowwoods, stinkwoods, and Cape chestnuts, blooming upwards from thick ferns on the forest floor. From west to east, the topography becomes increasingly dramatic, culminating in the plunging cliffs and steep gorges of Tsitsikamma and Storms River, which marks the “end” of the Garden Route.

Here visitors can test their head for heights by crossing the bridge over the Bloukrans River. Adrenaline junkies can get their thrill fix by leaping from the bridge at one of the highest bungee jumps in the world – an astonishing 216 metres (roughly 70 stories) above the base of the gorge. The suspension bridge over the Storms River mouth further east offers a more sedate and less vertiginous approach to taking in the spectacular scenery.

The town of “Plett” is known for its expanses of white sandy beaches and glorious cerulean sea, making it one of the best choices as a base to explore the rest of the Garden Route. Nature lovers will find themselves enthralled by a circuit of the Robberg peninsula at the Robberg Nature Reserve or watching the Cape fur seals navigating the surf. Southern right (July to November), Bryde’s, humpback (May/June and from November to January), killer and sei whales are regular visitors, and dolphins are permanent residents.

The weather along the Garden Route is temperate and idyllic, with temperatures seldom dropping below 10˚C or rising too far above 29 ˚C on the coast. Unusually for South Africa, there is no set rainy season, and rain can fall all year round (and it does – the Garden Route receives some of the highest rainfall levels in South Africa, hence the verdant foliage). There is a slight peak in rainfall during the winter months from June until August, which coincides with the arrival of migrating whales. The flowers celebrate the arrival of spring in September.

As already discussed, this is not a “route” but rather an exploration and visitors can make the best of their stay by choosing one or two places to stay and travelling to the various attractions from there. Careful planning and research will ensure the best out of a trip, and even when time is limited, it is better to make the most of specific areas rather than cramming in every attraction.

It’s hard to encapsulate the magic of the Garden Route – there are many beautiful coastlines in the world. Yet, this special patch of Africa stands out as a truly extraordinary destination. Perhaps it has to do with the fact that the Garden Route offers everything from dramatic scenery, hiking and wilderness adventures to beach holidays, scuba diving and wine farms, all in the same vicinity. The eclectic collection of local artists, writers, musicians, retirees, and big-city escapees who have chosen to live there adds to the vibrant atmosphere. Whatever it may be, it is undeniable that the Garden Route casts a kind of spell over those fortunate enough to explore its many wonders.

For more on the this magnificent piece of South Africa, read The Secret Garden Route