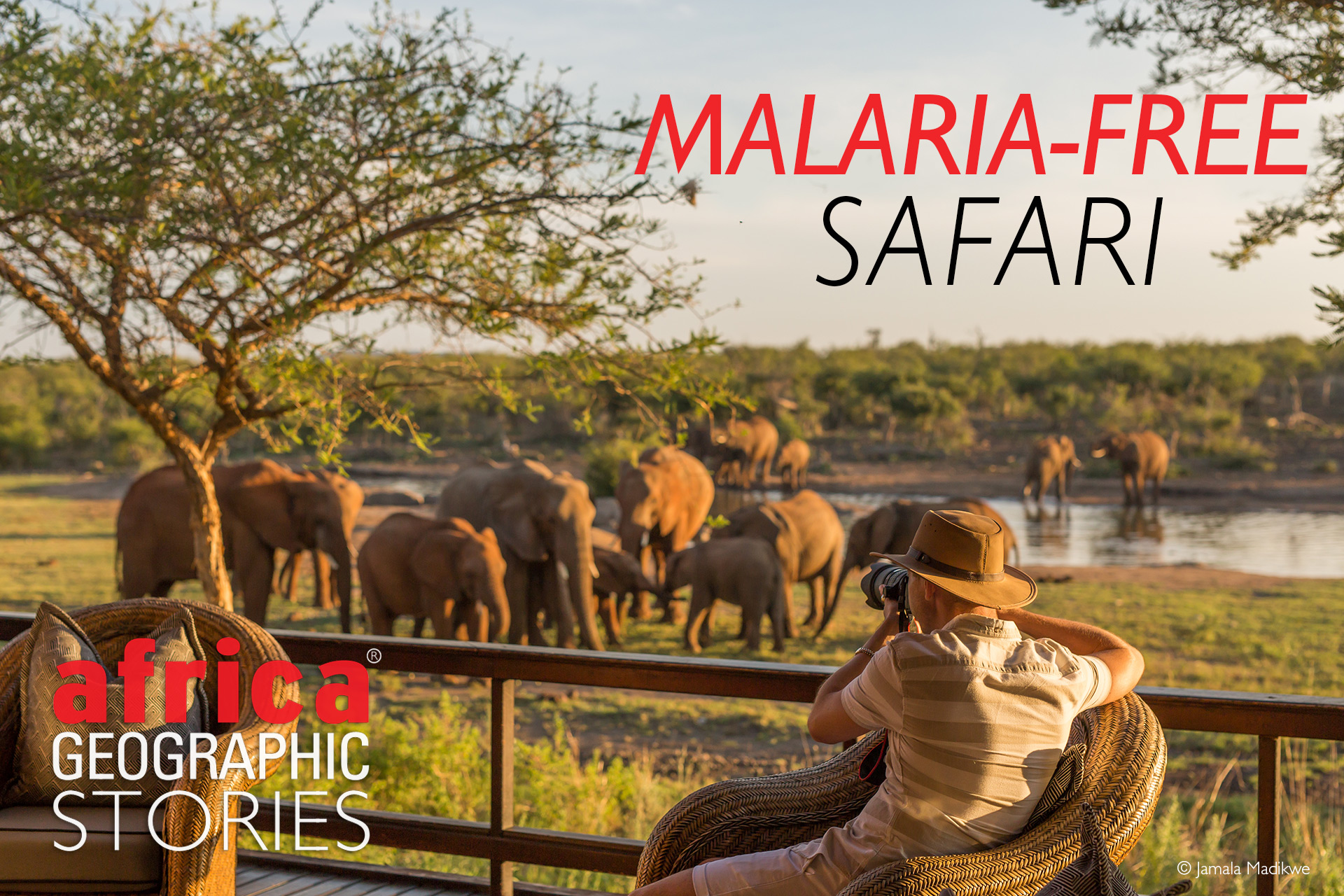 Classic safaris without the risk

Travelling to most African countries carries some risk of malaria infection – something that should always be taken into consideration when visiting. Though a few simple precautions can mitigate the risk of contracting malaria, there are those who, for various reasons, prefer not to take the chance at all. Fortunately, South Africa offers a plethora of malaria-free destinations – without sacrificing the luxury safari experience. Plus, many of these destinations offer sightings of the Big 5 – Africa’s must-see checklist including elephant, lion, leopard, buffalo, and rhino. Have a look at our list of favourite malaria-free safari destinations: 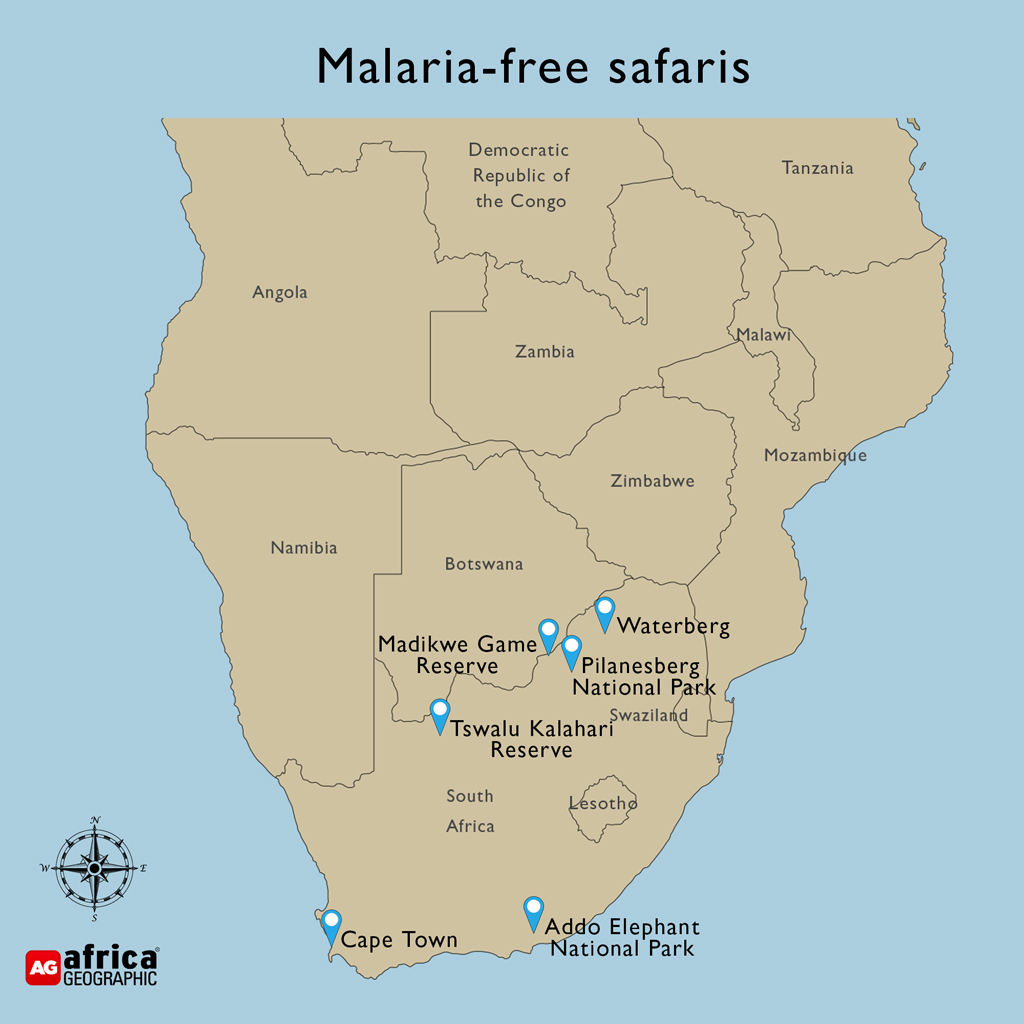 Situated at the centre of an ancient caldera of a long-extinct volcano, the Pilanesberg National Park is visually striking and bursting with life around every corner. The reserve is found in the transition zone between the Kalahari and Lowveld, making it an ecologically rich area offering thrilling wildlife viewing in picturesque surrounds.

The park offers a wide variety of accommodation options, from camping and budget accommodation to luxury lodges. At 550km² in size, there is ample terrain to be explored and a diverse road network (of more than 200km) which can be explored.

A diverse range of animal species native to southern Africa can be found here, including the Big 5 and more than 360 species of birds. The reserve is just two hours drive from Johannesburg and is perfect for intrepid explorers wanting a self-drive experience.

Nestled against the border of Botswana on the fringes of the Kalahari, magnificent Madikwe is one of South Africa’s top safari destinations – malaria-free or otherwise. The exclusive Big-5 reserve teems with iconic and unusual wildlife, offering the opportunity for spectacular animal encounters and striking photography. As Madikwe is not open to day visitors, safari experiences are very personal – whether from the back of a vehicle or the back of a horse.

There is a range of camps and lodges to choose from, from high-end luxury to family or budget-friendly options, and, importantly, community-owned and run lodges that see profits going directly to community members.

The malaria-free aspect of the reserve makes it an ideal attraction for families travelling with young children. It is also easily accessible from Johannesburg. Madikwe’s game viewing is at its best during the winter months – the dry season – as the animal life congregates near available water (often at lodges).

From decadent safaris to down-to-earth, family-oriented comfort, the Madikwe experience is a classic, guaranteed to enthral.

The Waterberg region in northern South Africa is considered one of the country’s best-kept safari secrets. It is a land of rugged beauty, with imposing rock formations and mountainous massifs shaped by aeons of water erosion. Its bushveld, savannah and riparian habitats are home to abundant wildlife. The area is known for its archaeological findings dating back to the Stone Age. With its diverse mix of private lodges and budget accommodation, the Waterberg is an escape for nature lovers, history buffs and adventurers alike.

The growing tourism industry supports Marakele National Park and several private Big 5 reserves, such as Welgevonden Game Reserve. Marakele is located in the transitional zone between the dry western and moister eastern regions of South Africa, allowing for a remarkable variety of wildlife and biodiversity – including fynbos growing in the mountainous areas of the park. A moderate and pleasant climate ensures an enjoyable stay, with summer rainfall keeping the worst heat at bay. Rare yellowwood and striking cedar trees, grand mountains, and Cape vultures soaring through the skies make Marakele a bush experience unlike any other.

As the name suggests, Addo Elephant National Park is an elephant lover’s nirvana. As part of the national park falls along the coast, it is also the only place in Africa where visitors can encounter the ‘Big 7’, which includes the typical Big 5 assortment plus dolphins and whales.

Addo covers five of the country’s eight vegetation zones, so the biodiversity on display is staggering, accompanied by sweeping vistas and accommodation options to suit most budgets.

The private reserves of the Cape

The southern and Eastern Cape are peppered with private game reserves – many of these featuring the Big 5 – where guests are granted a more exclusive experience than a national park. The Cape offers magnificent mountains, famous coastlines, and spectacular seaside scenery (also wine for the oenophiles), with a mosaic of fascinating habitats and protected spaces inland offering unique wildlife viewing.

Here visitors can experience all the best aspects of safari against the backdrop of some of South Africa’s most breathtaking, lush scenery. As a bonus, the many delights of Cape Town – from Table Mountain to penguins – are just a stone’s throw away (relatively speaking)!

Words fail to do justice to the sense of inner peace that descends when looking out across the vast vistas of the green Kalahari. Beneath the everyday sounds of chirruping geckos and melodious bird songs, the depth of the silence is a balm for the world-weary soul. Though no elephants are wandering Tswalu Kalahari Reserve, other members of the Big 5, wild dog (painted wolf) and cheetah are all present. However, the reserve is most famous for its assortment of rare and unusual wildlife offerings like habituated meerkats, roan and sable antelope, aardvark, pangolin, brown hyena and aardwolf.

A note on “malaria-free”: the above list includes South African destinations only, as much of the country is officially considered malaria-free. While there are several regions within Southern Africa where the risk of transmission during the dry season is negligible, they are still considered by the World Health Organisation to be malaria-risk areas.

Want to plan your malaria-free safari? Get in touch with our travel team to start the discussion.

For a full explanation of malaria and how to prevent it, see our story, Understanding Malaria