Posted on December 6, 2021 by teamAG in the Decoding Science post series.
ShareTweetPinEmailShareShareLinkedIn 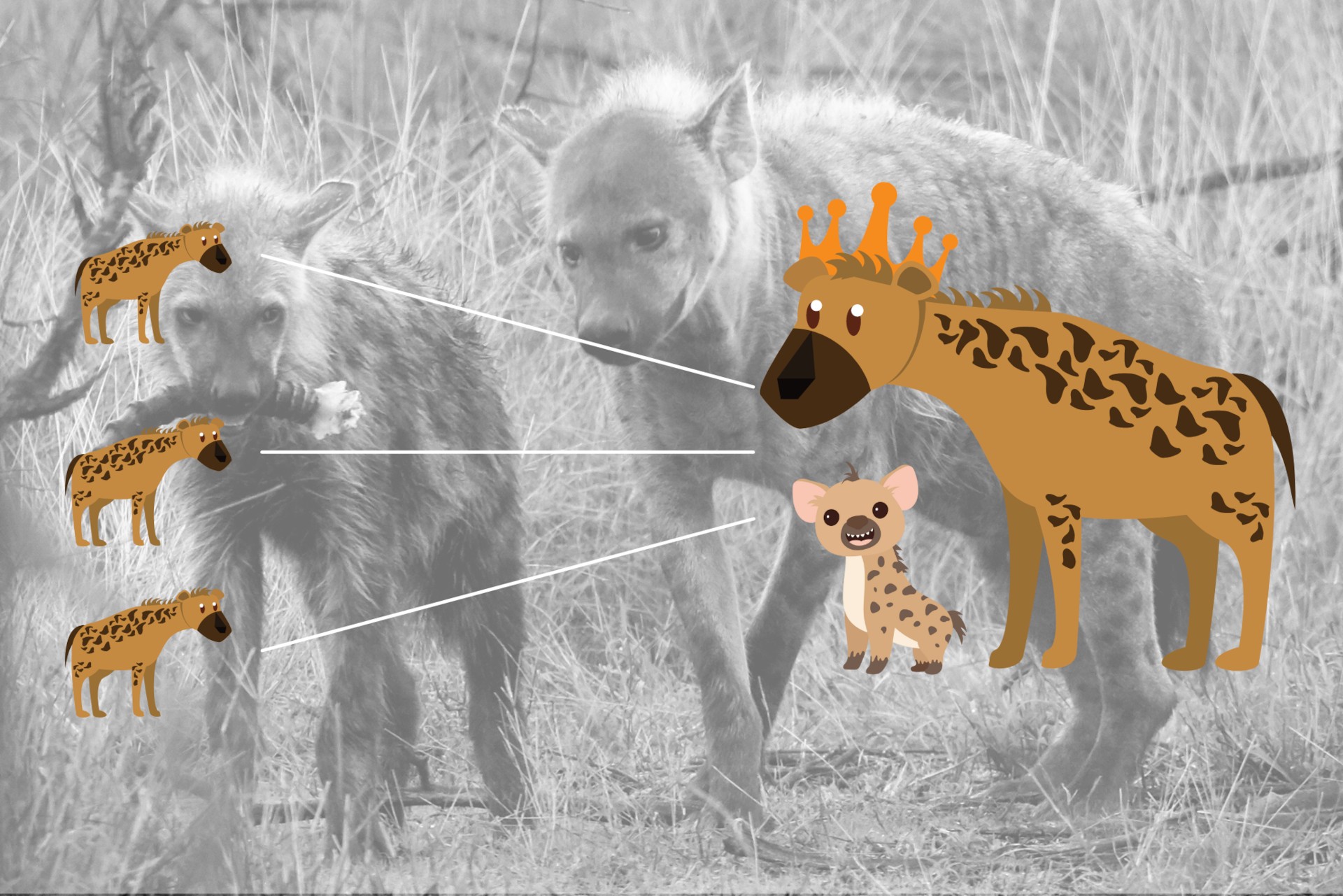 The intricate social lives of the spotted hyena have fascinated researchers for decades, and scientists have recently added another piece of valuable information to our understanding of their lives. New research shows that not only do high ranking hyena cubs inherit their rank from their mothers, but they also inherit a social network of allies that may persist throughout their lives. And, like any individual born into privilege, it serves them well.

Spotted hyenas have one of the most intricate social structures of any apex predator. They live in social units called clans of anything from a handful of individuals to over a hundred – consisting of related and unrelated females and their offspring (matrilineal lines), as well as immigrant males. The clans function within a strict matrilineal hierarchy where high rank correlates to increased life expectancy and reproductive success.

Previous research has shown that, for the most part, spotted hyenas inherit their rank from their mothers. Cubs born to high-ranking mothers (including males) will assume a high ranked position in the hierarchy and those born to low ranked mothers will assume a lower rank. The cubs learn their place at an early age, mimicking their mothers’ dominant or submissive behaviours around the den site. Dominance in spotted hyenas is not related to strength or size – a young cub will readily dominate and even bully an adult of lower rank. Naturally, this confers a massive advantage in terms of access to resources. But while the agonistic realities of hierarchy life are now relatively well understood, researchers wanted to know how affiliative relationships are established and persist. In other words, how do hyenas make and keep “friends”?

Two of the authors – Professor Erol Akçay and Dr Amiyaal Ilany – had previously developed a sophisticated theoretical modelling technique based around social evolution to develop some general principles of hyena social networks. To test their model out under natural conditions, they relied on observational data gathered by field biologists at the Michigan State University Mara Hyena Project, established by renowned hyena-expert Professor Kay Holekamp.

They painstakingly analysed the social interactions between clan mates, examining the proximity, duration, and regularity of interactions between individuals. Using complex statistical analysis, they were able to quantify social networks and compare those of mothers and offspring. The results show that even once young hyenas reach independence, their social networks remain very similar to those of their mothers. This similarity remains high even after the mother has died, persisting for over six or more years in some instances.

Furthermore, this pattern was most clearly seen in high-ranked individuals, and, importantly, these mothers and offspring with shared social networks lived longer. Several different factors likely contribute to why this pattern is not as clearly demonstrated in lower-ranked individuals. Firstly, low-ranking hyenas appear to associate with a greater variety of individuals – possibly attempting to compensate for their disadvantageous position through increased socialising. Another possible explanation (or contributing factor) is that low ranked mothers tend to spend more time on their own to avoid agonistic interactions. As a result, their cubs have fewer learning opportunities.

This all points to the conclusion that this socialising behaviour, as with rank, is learned at a very early stage in a young cub’s life. The behaviours established at this formative time will go on to have a profound impact on their lives for years to come, ultimately influencing their chances of survival and future reproductive success. On a larger scale, this social inheritance likely plays a pivotal role in clan stability.

The authors ultimately conclude that this research supports “Ilany and Akçay’s hypothesis that in species with stable social groups, the inheritance of social connections from parents is the cornerstone of social structure”. This applies not just to spotted hyenas but potentially to many other species as well, including both primates and elephants. The authors suggest that this emerging body of evidence suggests that social inheritance may be central to the development of social structures in social species.