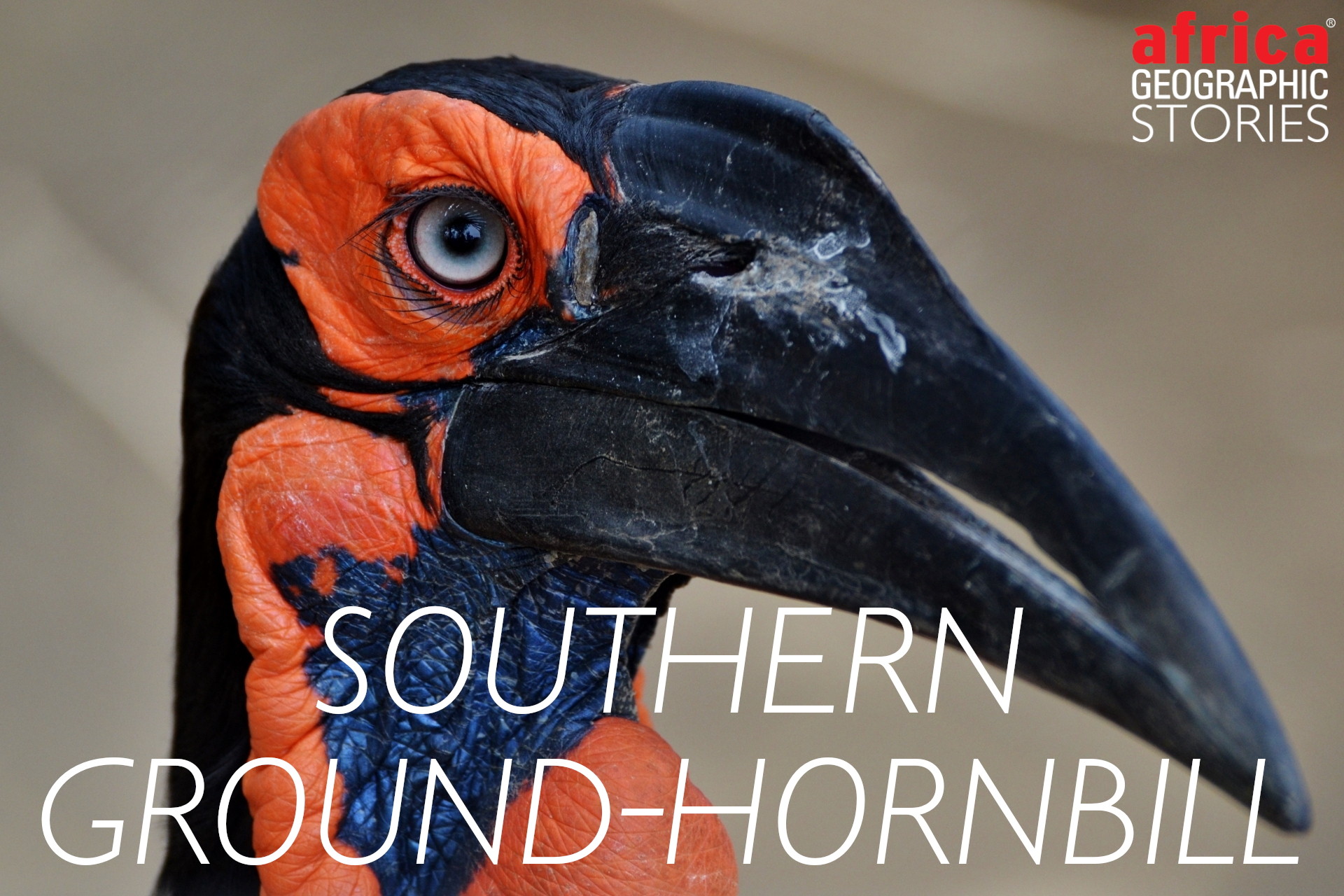 Nothing quite compares to the moment that morning breaks over the African bushveld. Through the strident calls of francolins, kingfisher trills, and melodious cuckoos cuts a low, booming sound – a primitive, hollow and deeply evocative duet that brings to mind an ancient instrument. It is the voice of Africa’s thunderbird: the southern ground-hornbill. This charismatic bird is one of Africa’s most iconic bird species. And the dawn chorus would simply not be the same without the haunting sound of the thunderbird. 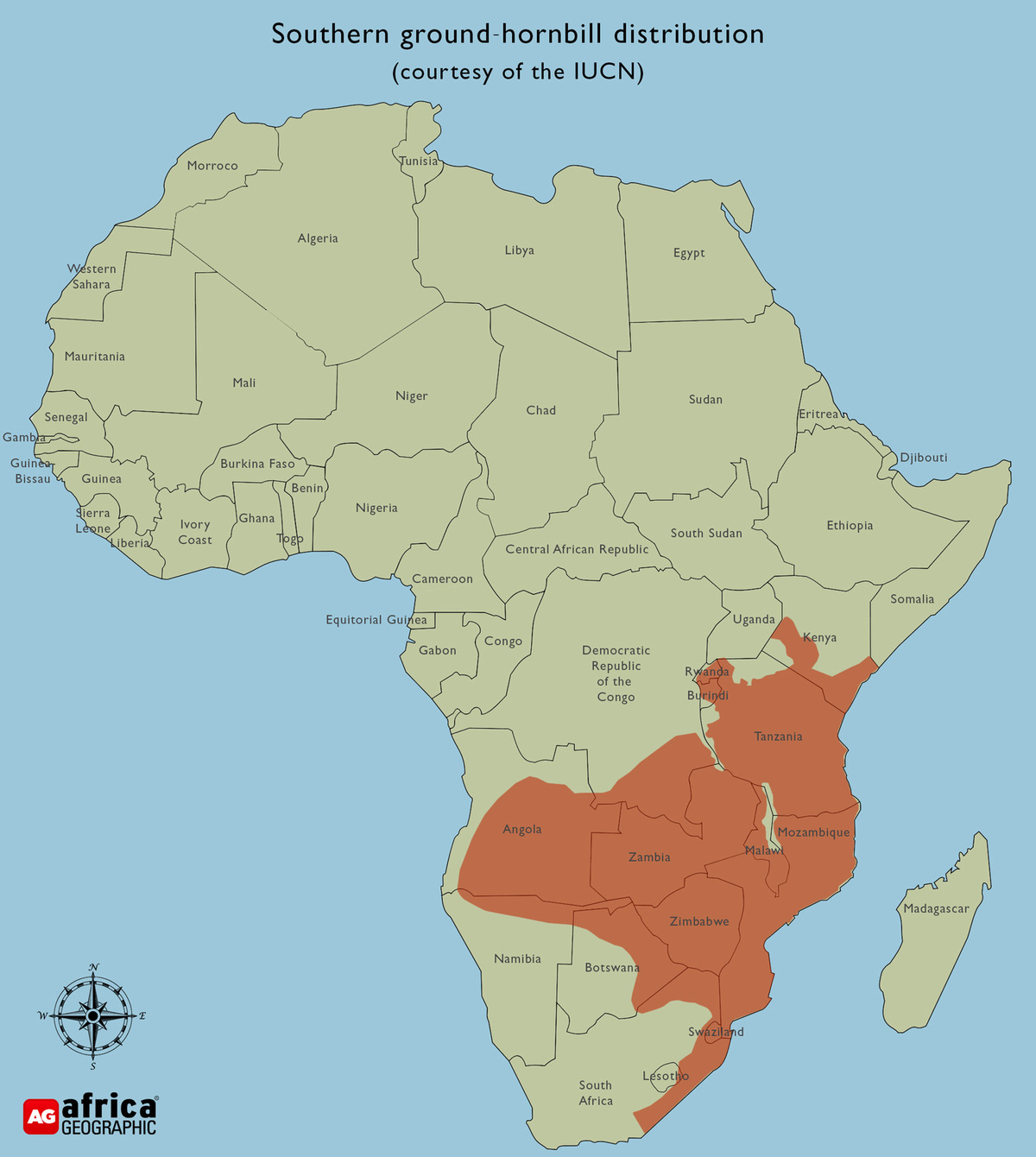 The southern ground-hornbill (Bucorvus leadbeateri) is the largest member of the hornbill family by far – a stocky bird around the size of a wild turkey, weighing anywhere between 2.0 to 6.2kg. Other than the fringe of white primary feathers on the edges of their wings, they are almost entirely clad in plumage of glossy ebony feathers. Their faces are characterised by vivid patches of bare crimson skin, giving the vague impression that they have been smacked in the face by an overripe tomato. Adult females can be easily distinguished by a patch of violet-blue skin below the beak that extends down the throat. Though these bright patches likely play a significant role in intraspecies communication, recent research has shown that, along with the casque (an extension of the maxilla bone on the beak), these wattles play a role in thermoregulation.

Ground-hornbills can and do fly – surprisingly gracefully for such large birds – but spend 70% of their days on the ground (hence the name). Their fierce yellow-green eyes are lined by a thick layer of long eyelashes that help to protect them from dust, sticks, and other risky realities of life spent foraging at ground level. Ground-hornbills are fierce avian apex predators, feeding on everything from snakes to small mammals. They use a combination of robust, scaly legs and a mighty beak to subdue prey. Though often described as omnivorous, most research indicates that they are almost exclusively carnivorous, with the bulk of their diet consisting of arthropods.

Ground-hornbills live in highly territorial groups that occupy individual ranges of 100-250km2 (depending on the type of habitat and quality of resources available). The consequence of this is that, despite a relatively large distribution across 16 countries in Southern and East Africa and parts of Central Africa, they occur at relatively low densities. They are among the continent’s most threatened birds and are allocated an overall classification of “vulnerable” on the IUCN Red List. Southern ground-hornbills belong to the Bucorvus genus along with their close relatives, Abyssinian ground-hornbill (Bucorvus abyssinicus) of northern sub-Saharan Africa and West Africa.

Southern ground-hornbills are obligate cooperative breeders – the largest known cooperative breeding bird in the world. They live in groups of up to twelve individuals, usually consisting of the breeding pair and male helpers from previous clutches. These (typically male) offspring delay dispersal for years to help care for future generations. Though female offspring may remain with the parents for a few years, only one adult female is tolerated in a group, and breeding is strictly between the breeding pair. This babysitting and caregiving experience is a vital learning curve – individuals that do not have around six years of helper experience do not breed successfully upon maturity.

Caregiving is offered to both the mother and chick once it hatches. The female will nest in a deep hollow of large trees (they are particularly picky on that subject, more below) at the start of the rainy season and lay between one and three eggs. Unlike other smaller hornbill species, she does not close herself off from the outside world, but the males of the group will keep her fed and protected while she incubates the eggs for just over 40 days. She remains with the newly hatched chick for another month while her bevvy of helpers flurries backwards and forwards with tasty snacks for mum and baby.

Though the female almost always lays more than one egg, only one chick will survive more than a few days, with either active or passive siblicide being a common occurrence. The adults will ignore the younger siblings, even when food is abundant, leading researchers to hypothesise that these eggs are simply an “insurance policy” if the first doesn’t hatch.

Southern ground-hornbills are extremely slow to mature and take more than two months to fledge fully. Even then, the juveniles remain dependent on their parents and older siblings for at least another year, if not two. As a result of this extremely high level of parental investment, it is not uncommon for breeding pairs to only produce one chick every three years.

These juveniles can be easily picked out of a group because the bare patches around the eyes, throat and face are grey. For the next six years, this skin will gradually transform to yellow, mottled orange and eventually red as the bird reaches maturity between six and seven years old. Even then, though the bird is likely sexually mature, they are unlikely to breed for several more years.

Southern ground-hornbills (and Abyssinian ground-hornbills) tick many boxes that make a species particularly vulnerable to steep population declines. They are a long-lived species that require high levels of parental care and take years to mature and produce offspring of their own. Even then, only one chick is forthcoming every three years – their reproduction rate is low. This is a similar problem to that experienced in species like rhinos or elephants. However, while those large mammal species have relatively low natural mortality rates, ground-hornbill chicks are exceptionally vulnerable during fledging. (They do, however, have very high natural survival rates once they reach adulthood.)

Ground-hornbills almost exclusively nest in the hollows of large, long-lived tree species. Unfortunately, these are usually the first plant species to disappear due to human encroachment. When a female’s preferred nest site is destroyed, it may take her years to accept a suitable replacement, which can destabilise the breeding groups.

Other threats facing ground-hornbills include secondary poisoning, particularly when the hornbills scavenge poison-laced carcasses intended for other species. Lead toxicosis is also a threat. Ammunition containing lead spreads fragments through carcasses; the discarded portions left behind after hunting can easily lead to the deaths of ground-hornbills and any scavengers, avian and mammal.

Finally, ground-hornbills are known to make enemies of local communities. Anyone who has ever watched a hornbill attack its reflection will be able to testify to this family’s indignant determination to see off a potential rival. Imagine a turkey-sized bird with a beak large enough to crush bone and picture the potential damage to windows, cars, and any other reflective surface. In impoverished rural communities, this destruction of property makes ground-hornbills obvious targets for persecution.

The bringer of thunder

Interestingly, throughout their range, southern ground-hornbills are the subjects of considerably disparate traditional beliefs. In some cultures, they are strongly associated with death and misfortune, which may translate to either direct killing and persecution or a taboo around harming them, depending on the belief. Ground-hornbills are sometimes associated with altered human perception, making them popular in traditional medicines.

Perhaps the most well-known belief surrounding ground-hornbills is their association with rain and thunderstorms. This likely arose since their breeding season (when they call most frequently) occurs at the height of the rainy season. So powerful is this belief in some cultures that it is thought that a single feather left in a river could result in a flood. For the most part, this association with rain (and, therefore, life) works to the benefit of the southern ground-hornbill. However, it can result in hornbills being targeted for rituals and traditional medicine during times of drought.

Though the southern ground-hornbill is listed as “vulnerable” by the IUCN Red List, there are several countries within their range where the ground-hornbill is severely threatened. They are endangered in South Africa, Namibia, Lesotho and Swaziland and may soon be critically endangered in South Africa and Lesotho. The populations in Kenya, Tanzania, Malawi, Zambia, Zimbabwe and Mozambique also require concerted conservation efforts to keep numbers stable.

The many threats facing them, combined with contrasting cultural perceptions, require multi-pronged approaches from the organisations dedicated to conserving the ground-hornbill. This is accomplished through (among other initiatives) education programmes, the provision of nest boxes, and the protection of remaining habitats. Some projects also remove the second chick from the nest (only the older chick survives under natural conditions) and hand-raise the youngsters. Artificial breeding groups are created before the birds are released back into their former range. This must be done in such a way that the birds do not form an attachment to the human caregivers (through puppets and other methods). The young hornbills must also be given sufficient “helper practice” during the first, crucial developmental stage years.

Sadly, the very traits that make southern ground-hornbills one of Africa’s most iconic bird species have made them more vulnerable to human impact. Fortunately, programmes aimed at changing perceptions through culturally bespoke initiatives are showing signs of success. Protecting the southern ground-hornbill is essential not just because of their ecological role. They are complex, social animals, and we still do not fully understand the nuances of their intelligence or evolution. Through research, we hope to learn more on the finer nuances of this charismatic bird.

Those wishing to contribute to the conservation of ground-hornbills can visit the Mabula Ground-Hornbill Project in our private conservation & travel club. (For more information on joining the club, see below.)