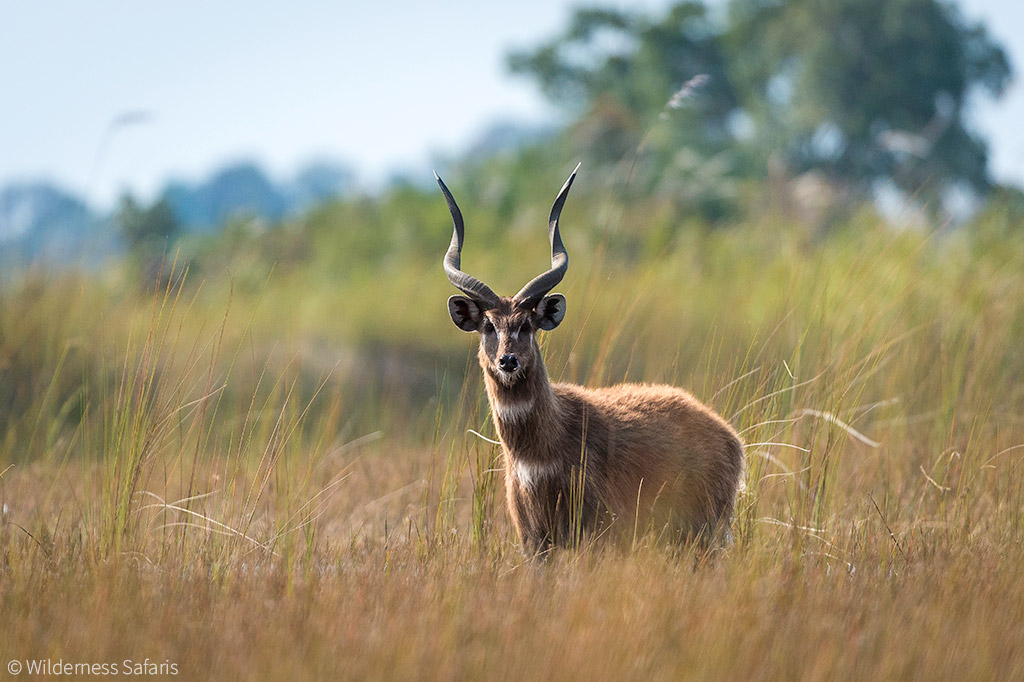 The early morning mist hovered over the marshland as the sun crept above the tangled, thick reeds, turning the sky from violet and brooding grey to pale pink. The floodplain was below us, and we watched as one by one, sitatunga emerged silently from the dense beds of phragmites and papyrus to graze in the open.

We were in Vivienne’s Hide in Kasanka National Park, Northern Zambia. Kasanka is one of Zambia’s smallest national parks, at 470km2, This peaceful little park is well endowed with rivers, lakes, wetlands, forests, lagoons, meadows and dambos that support an abundance of animals and birds. Kasanka is also home to a unique and spectacular annual migration of several million straw-coloured fruit bats. But what we had come to see was the sitatunga, and this is one of the best places in the world to spot this secretive, semi-aquatic antelope. 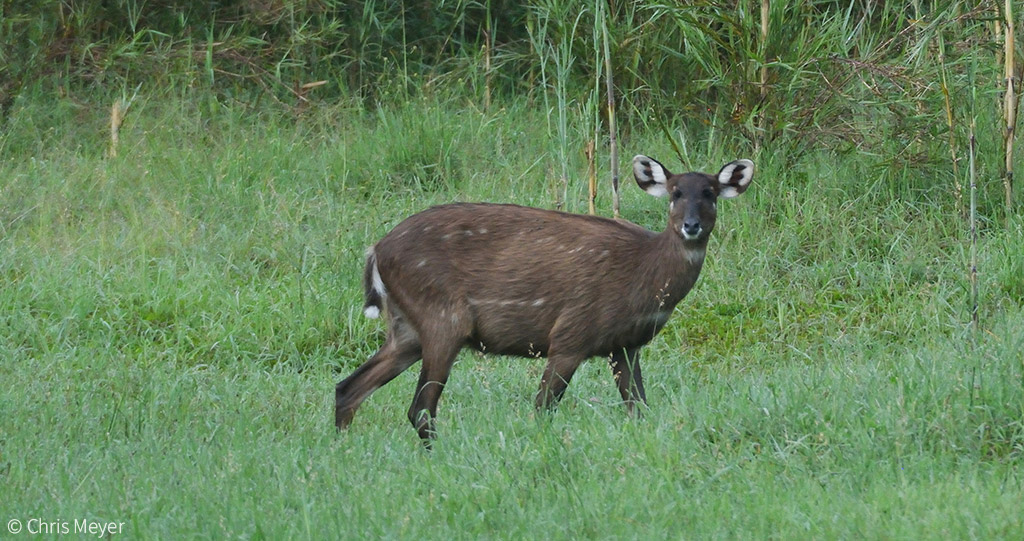 Sitatungas are early risers and most active just after dawn, which is why we were here, coffee in hand, at the misty start of a new day to silently watch as small groups and lone bulls with long curly horns graze peacefully. As the sun rose and the mist dissipated, a herd of elephants made their way across the flood plain, and one by one, the sitatunga melted away into the reeds. Delighted with our morning, we headed back to camp. 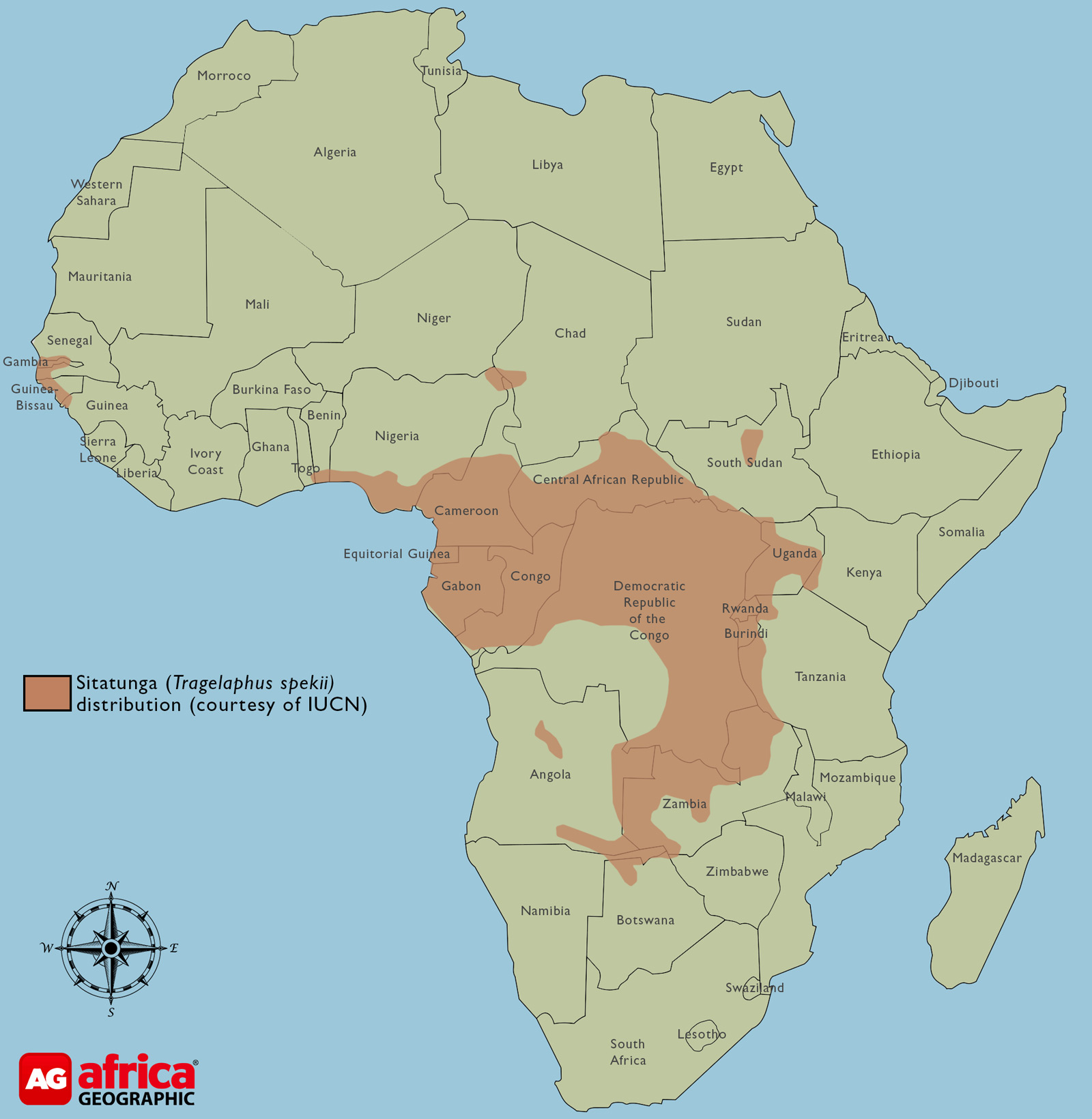 The sitatunga is Africa’s only amphibious antelope, and they are specially adapted to their habitat. Their elongated, widely splayed, banana-shaped hooves allow them to walk almost silently through the water and across swampy ground. But when they find themselves on firm terrain, these same hooves can make them rather clumsy. Their shaggy, oily, water repellent coat is another adaptation to their aquatic lifestyle. Their wedge-shaped and lowered head, coupled with the backward bend of the males’ horns allow for easy navigation through dense vegetation. These antelope are strong swimmers, able to move slowly through water for several kilometres. They submerge their entire bodies, both when swimming and to avoid detection from predators, with only their nose and eyes poking above the water. Sitatunga tend to frequent the deepest, densest parts of the swamp, where they make themselves even more inconspicuous with slow and deliberate movements, often standing and ruminating in water up to their shoulders. Their hearing is acute, with ears structured so they can accurately pinpoint the origin and direction of any sound; this is particularly useful in their dark and densely foliated environment, where long sight is of very little value. 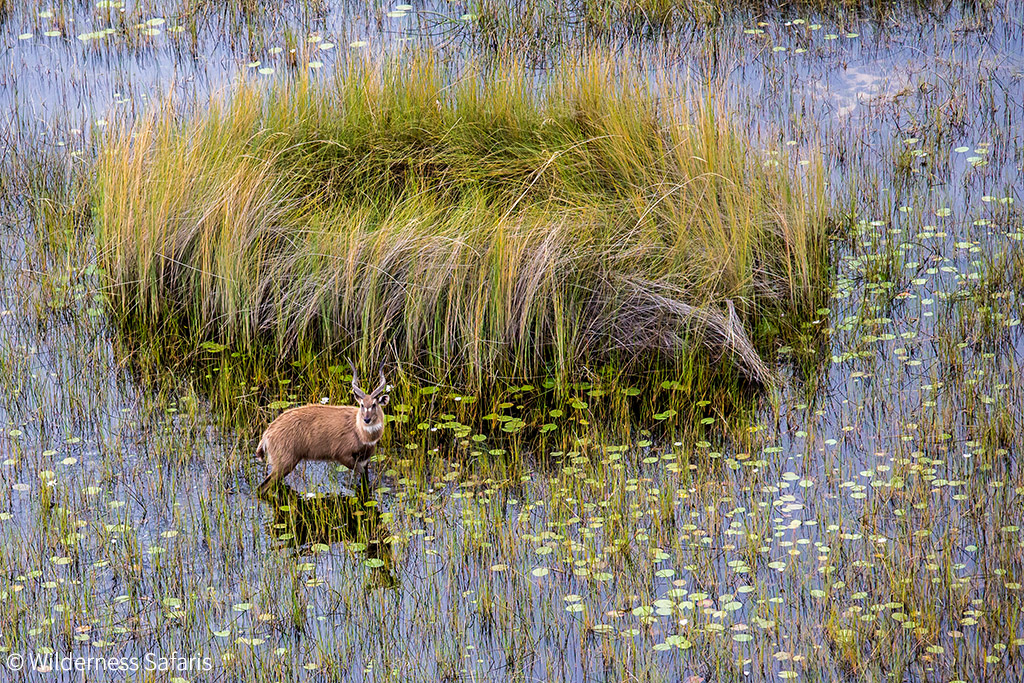 Though common, even abundant, in African swamps and permanent marshes, the sitatunga is one of the most secretive and least-known of Africa’s large antelopes. Females are fawn-coloured with vertical white stripes and spots across their rump, to provide camouflage in dappled light. Males are larger, and chocolate brown with long, spiralled ivory-tipped horns, a mane and white stripe down their spine. 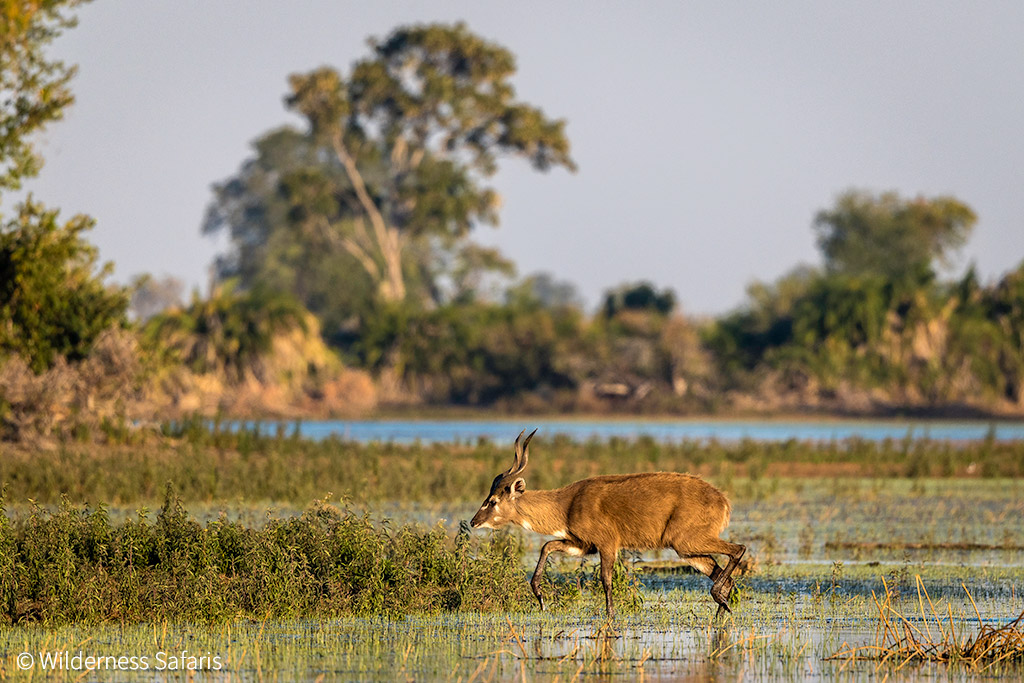 Dr Vera Rduch completed her thesis on puku in Kasanka National Park. As a by-product, she also collected information on the park’s sitatunga, as the antelope overlap both in distribution and diet throughout the park. Sightings of puku and sitatunga grazing together on the flood plains, combined with camera trap images of them entering woodlands in the late evening, in the hot, dry season (Sept-Oct), showed that while sitatunga tend to graze on young papyrus and reed shoots for the bulk of their diet, they don’t limit themselves to swamp vegetation. [Vera Rduch, 2013. Ecology and Population Status of the Puku Antelope (Kobus vardonii LIVINGSTONE, 1857) in Zambia. PhD Thesis in Zoology, Rheinische Friedrich-Wilhelms-Universität Bonn. 287 pp.]. In some parks they have even been recorded feeding on elephant dung, obtaining nutrients from undigested seeds.

Using faecal analysis, Rduch ascertained that, in Kasanka, crocodiles feed on sitatunga, not surprising given their considerable overlap in habitat. She also found sitatunga hair in the scat of civet and white-tailed mongooses, who must have fed on sitatunga carrion as scavengers. [Vera Rduch, 2013. Ecology and Population Status of the Puku Antelope (Kobus vardonii LIVINGSTONE, 1857) in Zambia. PhD Thesis in Zoology, Rheinische Friedrich-Wilhelms-Universität Bonn. 287 pp.]. Sitatunga don’t only fall victim to natural predators. Their regularly used, well-worn pathways through reeds and papyrus, between feeding and resting areas, make them especially vulnerable to poachers’ snares and hunters with dogs and guns. Sitatunga is prized bush meat. In Zambia they are afforded some protection because they are classed as a ‘government trophy’, meaning if a poacher is caught with sitatunga meat, he will get a more severe sentence than if caught with puku or common duiker meat. 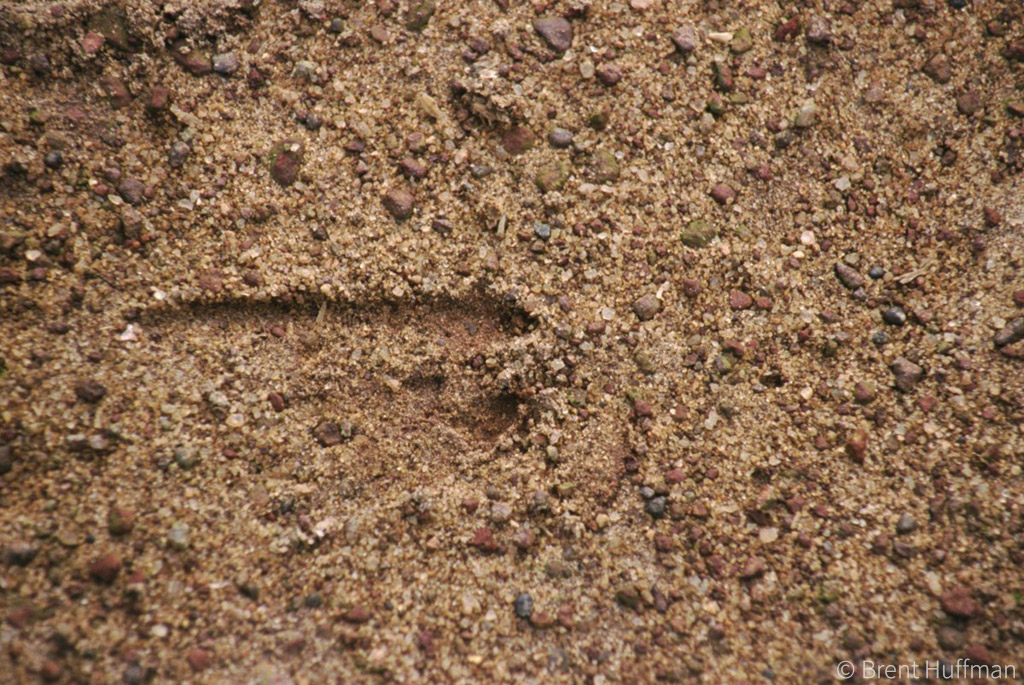 Sitatunga breed throughout the year, females usually producing a single offspring, after an approximate seven month gestation period. A calf will weigh between 3.5 and 4 kilograms at birth and potentially double in weight during its first months. After the birth, the female hides her calf on a vegetation platform, secluded in dry reeds for protection. This youngster will stay with its mother, being suckled by her for about six months, and learning to navigate the swamp safely, following its mother about, even after she has given birth again. A calf takes time to master the specialised gait of the sitatunga, and will often, in the early months, lose its balance and fall into the water. 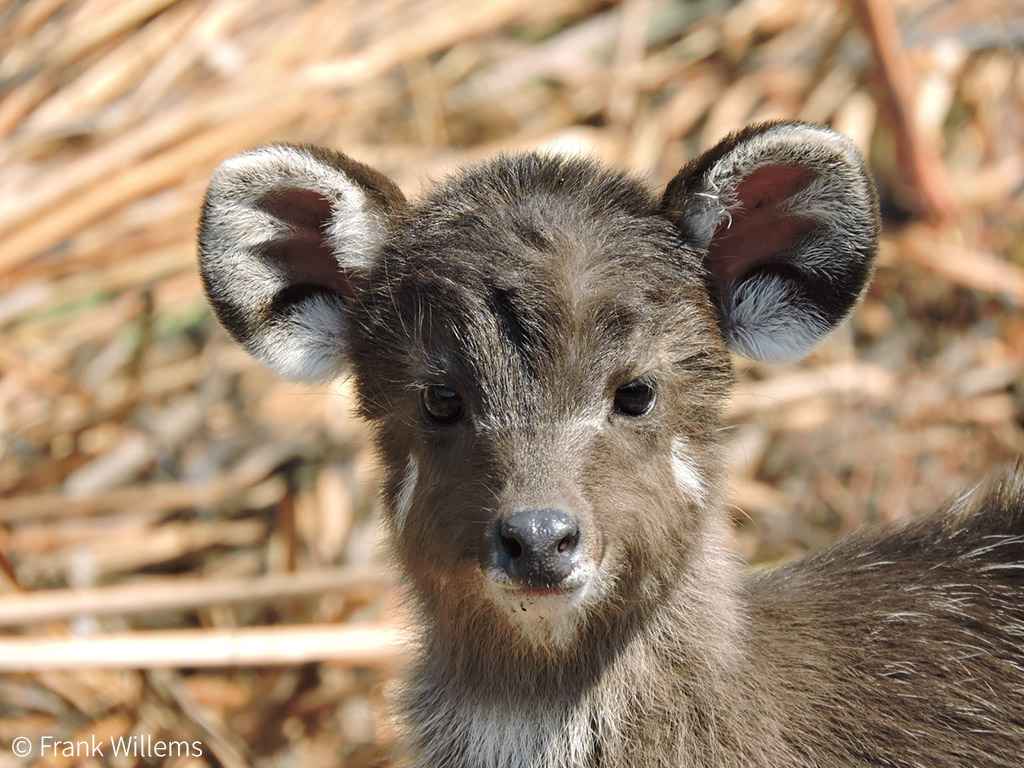 Though the sitatunga has been classified under the Least Concern category by the International Union for Conservation of Nature and Natural Resources (IUCN), habitat loss is the most severe threat to the survival of the species. Other threats include the increasing loss of wetlands that has led to isolated populations, long-term changes in the water level that affect nearby vegetation and consequently their diet. In Zambia vast areas of the Bangweulu and Busanga swamps are burnt every year, placing animals like the sitatunga at grave risk. 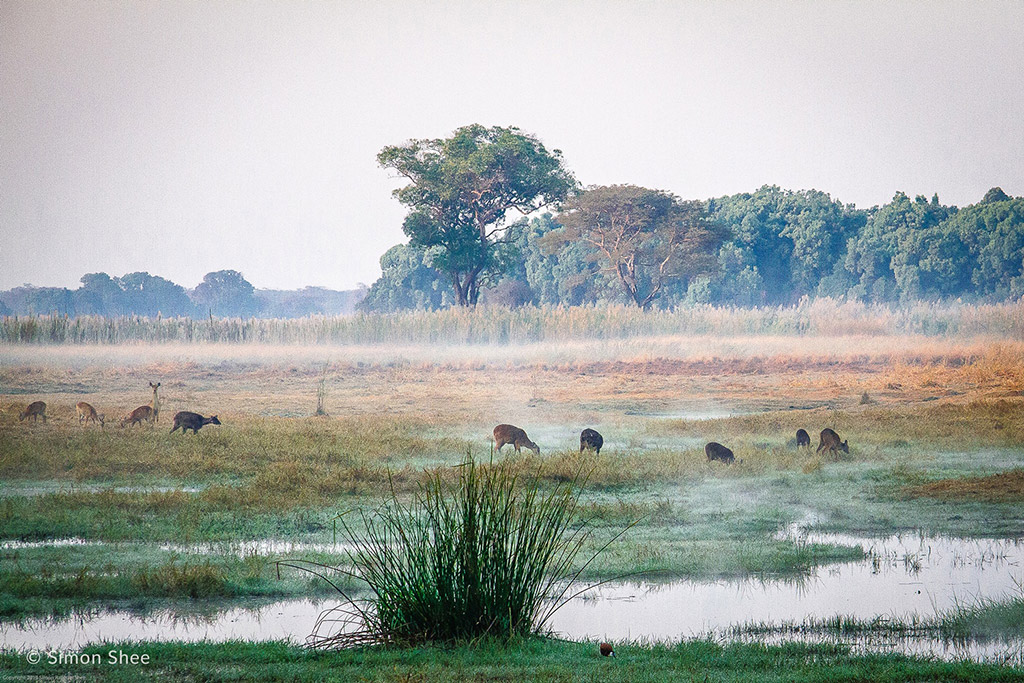 At the end of the day, we returned to Vivienne’s Hide, as the sun began to sink in the sky and were rewarded with a spectacular sunset tinting the flood plain orange and scarlet. The grazing sitatunga glowed golden in the fading light. We stayed till we could see them no longer, and as the moon rose, climbed down the ladder and left them in peace. 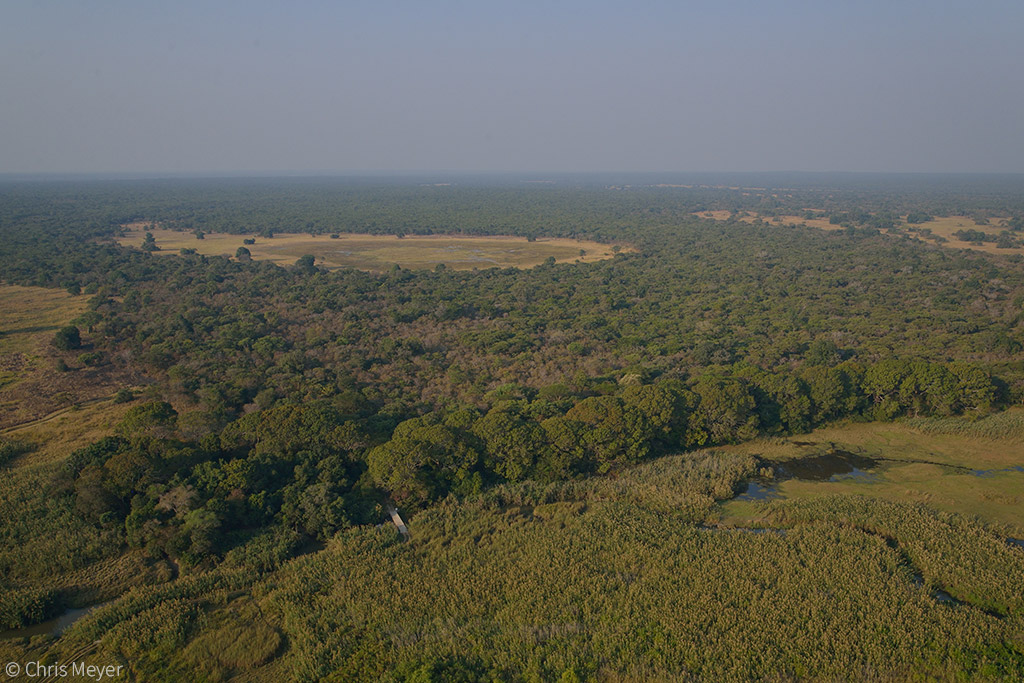