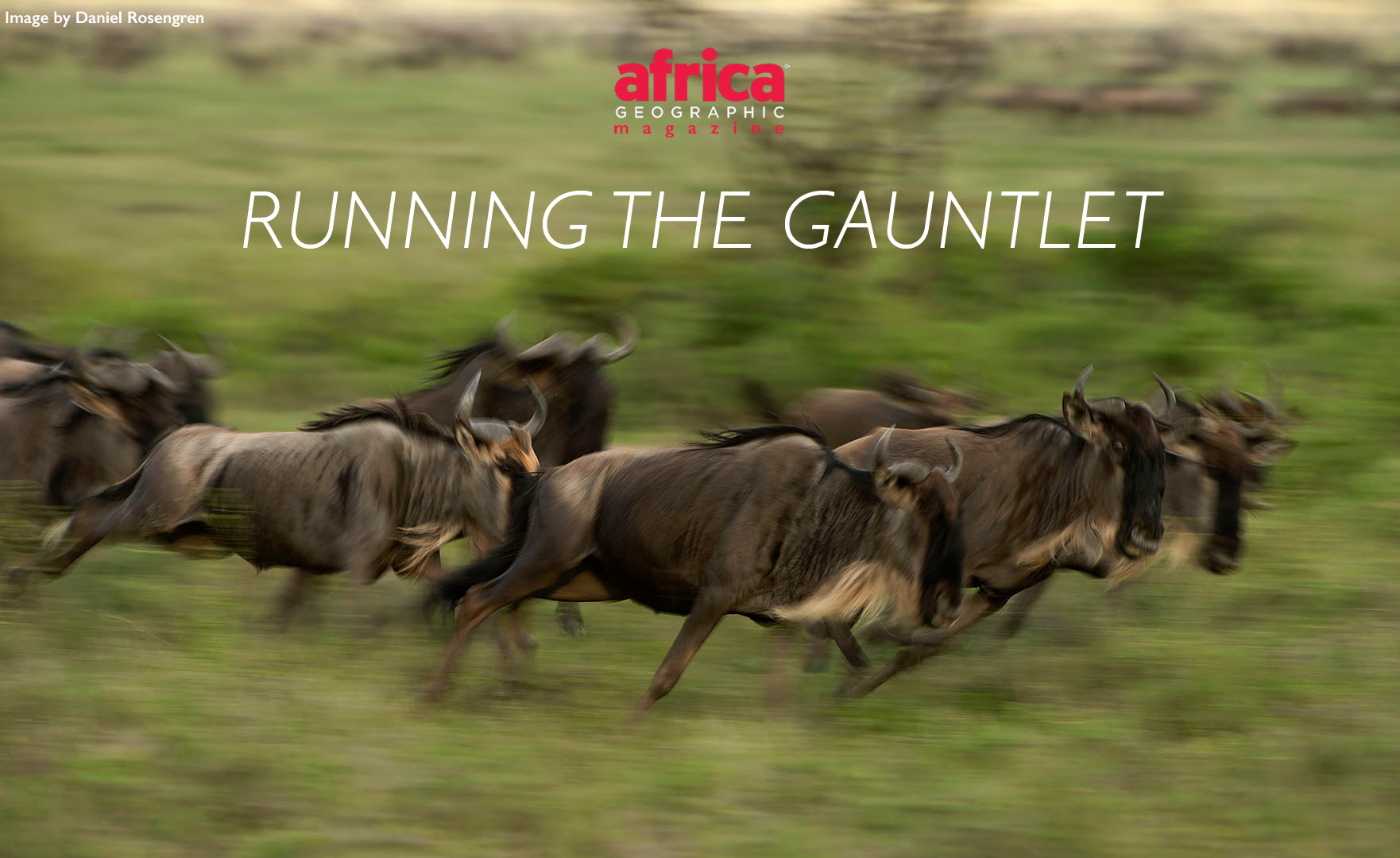 “Would the animals be able to go on living here? We had already noticed that large herds of wildebeest roamed outside the present boundaries of the park. No one knows where the hundreds of thousands of hooves will march. We were filled with fear and foreboding.”
Bernhard and Michael Grzimek, Serengeti Shall Not Die, 1959.

Blood-red dawn spills across the savanna in Tanzania’s Serengeti National Park. The first hoofbeats drum in the distance. Soon a sea of swishing tails and dust obscures the horizon as hundreds, then hundreds of thousands of wildebeest thunder north toward Kenya’s Masai Mara and greener grasses. Some 1.3 million wildebeest and 200,000 zebras cycle through the Serengeti every year in the wake of monsoonal rains. It’s a widescreen drama spiced with life, death, and attackers in the shadows. Wildebeest that make it across the Tanzania-Kenya line reach a promised land: newly verdant pastures. A minefield, however, awaits south of the border – wire snares set by villagers illegally hunting bushmeat as the animals pass through their settlements.

The “great migration” is the target of hunting for bushmeat

Before the formation of game reserves and national parks, subsistence hunting was a legitimate means of survival for locals. But today such hunting is a threat to wildebeest and other migratory species, say scientists Dennis Rentsch of the Frankfurt Zoological Society-Africa and Craig Packer of the University of Minnesota.
The migration’s predictability makes for easy targets for villagers in the western Serengeti, Rentsch and Packer report in a recent issue of the peer-reviewed scientific journal Oryx. Wildebeest – as well as zebras, Thomson’s gazelles and other grazing animals that trail behind – run the gauntlet.
The study was conducted in villages on the edge of the Serengeti’s Ikorongo and Grumeti Game Reserves and Ikona Wildlife Management Area. The game reserves and wildlife management area serve as buffer zones between human activity and Serengeti National Park. But the biologists state that communities along these boundaries, “are the major source of illegal wildlife hunters in the region.”

The researchers collected dietary recall data from eight villages in the Serengeti and Bunda districts to the west of Serengeti National Park. These districts, they say, have the highest levels of bushmeat hunting in the Serengeti ecosystem. The villages were selected randomly, with the requirement that no two villages border each other.
Four sub-villages were chosen from each village and four to five households from each sub-village. Over 34 months, some 132 households were visited. Dietary recall questionnaires requested information on meat-based protein sources cooked and consumed each day during the previous week.

How methods of assessing bushmeat
hunting are compared:

Scientist Eli Knapp of Houghton College in Houghton, New York, and colleagues compared that method of assessing bushmeat hunting with two others. Two of the methods involve household interviews, while the third depends on data collected by anti-poaching enforcement officers.
One household interview method is based on a self-assessment of poaching activity; respondents are asked to admit to hunting for bushmeat. In the other – dietary recall of bushmeat consumption, which Rentsch and Packer used – participants report on what they’ve recently eaten. The strength of the dietary recall method, researchers have found, is that it decreases participants’ fears of responding truthfully, especially when bushmeat consumption is asked about on a list of other food sources such as fish.
The results were contrasted with those from the enforcement method: the total number of arrests from anti-poaching patrols.

Estimates are that tens of thousands of wildebeest vanish each year

Rentsch’s and Packer’s results are a first look at wildebeest offtake based on direct measures of household consumption. The numbers were highest during or immediately after months when migratory wildlife species passed through the study area.
The scientists estimate that significant numbers of wildebeest, on the order of tens of thousands, vanish each year. The losses are higher than those derived from past ecological models. Those models, the biologists say, were based on wildebeest population data for 1992-93. At the time, around 370,000 people lived in the western Serengeti; in 2010, it was 600,000. By 2050, it may be 940,000.

Africa’s human population is expected to quadruple by 2100

One billion people currently tread on African ground. “Before the end of the century, Africa’s human population is expected to quadruple,” Packer says. “Tanzania alone could reach 200 million. It had less than 10 million in the late 1950s when the Grzimeks wrote Serengeti Shall Not Die.”
As the number of people goes up, the demand for bushmeat increases. The mean consumption of bushmeat between 2007 and 2010 was 2.2 to 2.8 meals per household per week, the new findings show. What will happen if that intensity continues?
To date, the situation hasn’t reached a point of no return. The Serengeti wildebeest population, it’s believed, is faring well at this time. But there’s more to the story than meets the eye, says ecologist Grant Hopcraft of the University of Glasgow, who also conducts research on Serengeti wildebeest.
The explanation for why the population seems healthy when so many wildebeest are being taken, Rentsch and Packer say, and Hopcraft also suggests, may be that most wildebeest caught are males, leaving females to reproduce and keep population numbers up.

“The demand for protein needs to be met”

“Males spend more time in woodlands,” says Rentsch, “while females and young are mostly on the plains, where there are fewer places to attach snares.” And males are the front-runners, adds Hopcraft, the first to leave one area and arrive in another – and be caught.
Poaching data from the Ikorongo and Grumeti Game Reserves show a 1.5-to-1 male-to-female ratio of wildebeest caught, Rentsch says, and studies in other locations near the Serengeti indicate a ratio of 14-to-4.
The bottom line, state Rentsch and Packer, is that “wildebeest offtake cannot remain sustainable if communities continue to grow at an exponential rate and the per capita demand for bushmeat remains at the current level.”

In sync with the results, Tanzania National Parks warden William Mwakilema maintains that “one of the biggest challenges in managing wildebeest and other wildlife is poaching for bushmeat, which has advanced from a subsistence to a commercial level.”
Packer agrees. “It will be important to keep a watchful eye on the status of the Serengeti wildebeest population.”
Is there another source of protein for villagers near the Serengeti? Freshwater fish from Lake Victoria are available year-round. But what that means for wildebeest and bushmeat hunting is unclear.
“Lake Victoria’s fish are also at risk from commercial fishing operations and increasing demands on the lake as a freshwater resource,” says Rentsch. “Should the fish stocks fail, it remains to be seen what would, in turn, happen to Serengeti wildlife.”
Freshwater fish may be little more than a finger in the dike of wildebeest losses: the farther villagers live from Lake Victoria, the less fish and more bushmeat they already consume.
“The demand for protein,” Rentsch says, “needs to be met.”

What lies on the Serengeti horizon?

“These findings give a glimpse of the darkest cloud that lingers on the horizon for the survival of the migration, the Serengeti and all conservation areas in Africa: our never-ending need for more land, more water, more natural resources,” says Markus Borner, an ecologist at the University of Glasgow who has long studied the Serengeti.
Are wildebeest, gazelles and other species – such as the lions, leopards and cheetahs that depend on herbivores for food – doomed? Hopefully not, say the researchers.

Bushmeat is the cheapest, most readily available source of protein

The task is convincing starving people to spare wildlife, says Rentsch, “when a high poverty rate is coupled with a high human population density – and access to one of the world’s largest intact wildlife migrations, hungry humans will likely continue to rely on bushmeat, the cheapest, most readily available source of protein.”
Adds Mwakilema, “We need comprehensive and enforceable land use plans, as well as a study to determine livelihoods other than bushmeat as a major source of food and income.”
Ecologists are working to alleviate the pressure on wildebeest by helping communities develop alternatives, according to Rentsch. Chicken farming and beekeeping are becoming profitable and conservation-compatible businesses, he says. “The challenge is scaling this up to the magnitude of the bushmeat hunting pressure.”
If the wildebeest population dies out, zebras and gazelles may in turn fall, lying in a snare-line boneyard baked clean in the Serengeti sun.