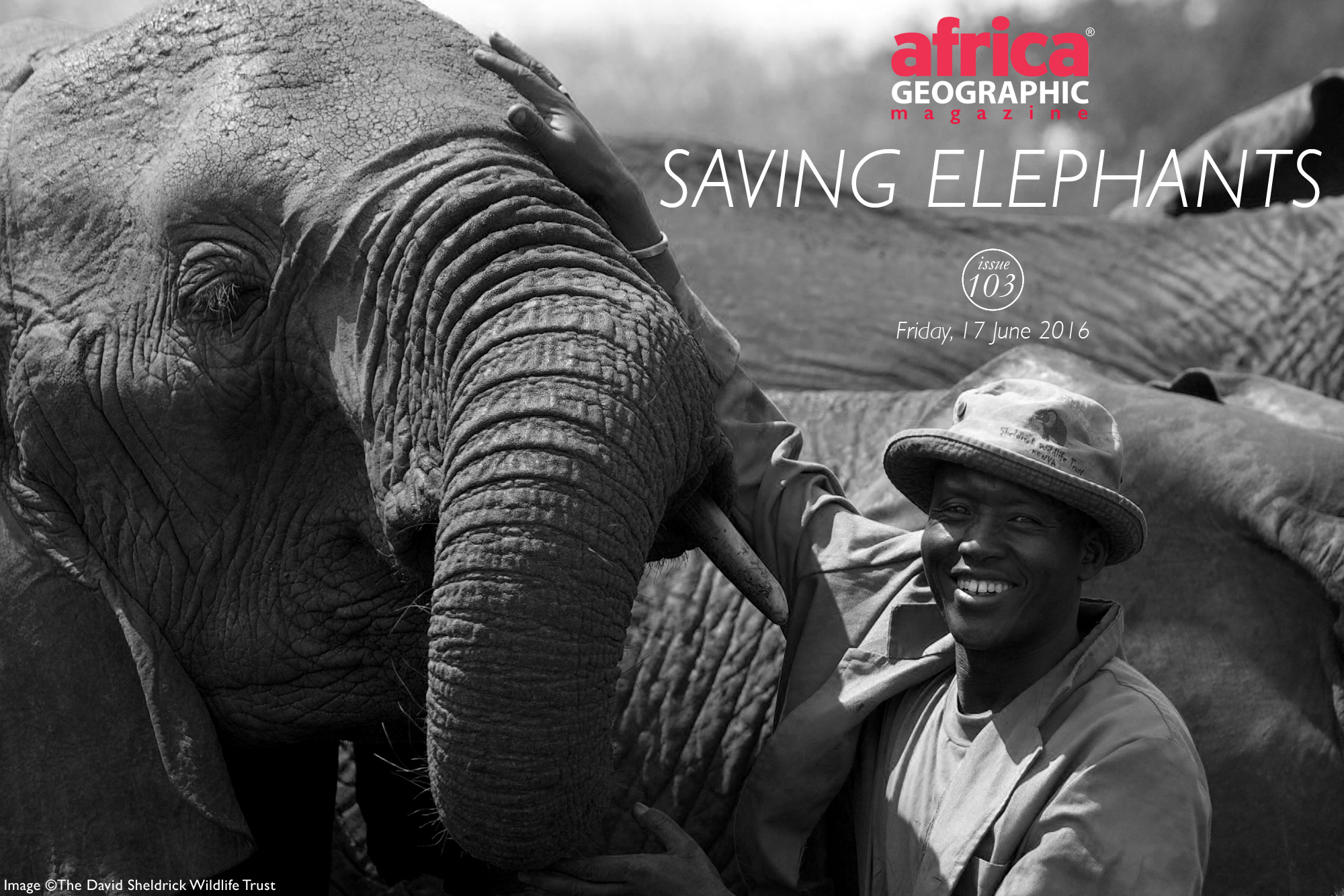 Laid on a mattress, covered in a warm woollen blanket, his chest rising and falling as he breathes, Murit sleeps soundly. Should he wake, a keeper is sleeping in a bunk above, ready to offer reassurance if he needs it. It’s a far cry from the weak and bruised baby with blood-red infected eyes that The David Sheldrick Wildlife Trust (The DSWT) rescued in March 2015 after Murit was trapped in a well.

Murit was flown from Northern Kenya in a specially chartered aircraft to Nairobi, and he was one of 28 orphaned baby elephants rescued by The DSWT in 2015 as part of their Orphans’ Project. Permanently on standby, The DSWT swings into action, with veterinary supplies including IV drips and milk, the minute that a call to rescue is received.

Once at the orphanage, a period of intensive care begins as keepers work together to form a new family for the orphan, replicating all the actions that would have been carried out by the elephant’s mother or herd. The keepers feed the orphans a specialist milk formula – developed over 28 years by Dr Dame Daphne Sheldrick DBE – to ensure that they grow strong. As a highly emotional species, the babies receive regular reassurance from their keepers, who even lend their fingers and thumbs for the orphans to suck. The keepers also slather suncream on the youngest elephants and wrap them in blankets for comfort and warmth when it gets cold in the evenings.

The Nairobi Nursery will provide a home to these orphaned elephants for the first three years of their life, and they are cared for by the keepers around the clock. But just as children must take steps to independence, the orphans graduate to one of three reintegration centres, where they take up to seven years to learn how to live as a wild elephant. From meeting wild herds and orphans that are living back in the wild to learning elephant-society etiquette, The DSWT’s reintegration centres provide a haven for orphans to make the gradual transition while in the safe presence of the keepers.

To find out more about what elephants are up against, continue reading below the advert

Intelligence, teamwork and compassion are just some of the attributes accredited to elephants, the world’s largest land mammal. With a whopping 22-month gestation period, herds that stay together for life, and an impressive memory to boot, it is difficult not to sing the praises of this species.

But amongst those that live near elephants, the words ‘crop raider’ or ‘problem animal’ might also be heard. And amongst dealers in China, elephants are described as a ‘source of ivory.’ These phrases are demonstrative of the myriad threats that face pachyderms. The demand for ivory has led to increased poaching activities, and human populations have grown so much that they have expanded into elephant ranges. As a result of these pressures, there are now less than 400,000 elephants across Africa.

Demand for carved ivory was almost negligible 20 years ago in Hong Kong thanks to a ban on the international sale of ivory in 1989 after a global outcry. However, two ‘one-off sales’ in 1999 and 2008 then caused the popularity of ivory to sky-rocket, which had a devastating impact on elephants in Africa. Weak penalties for poaching, as well as the misguided impression that elephant tusks can fall out naturally like teeth, are also to blame. One hundred thousand elephants were killed for their tusks between 2010 and 2012, causing population declines of as much as two to three per cent per year.

At this rate, and without action, elephants could be extinct from the wild within our lifetime. But the writing is not yet on the wall for this species, and The DSWT has been uniquely positioned for almost 40 years to help save the species. Working tirelessly through projects that encompass anti-poaching, vet units, aerial surveillance and of course their world-renowned elephant orphanage that cares for elephant calves whose parents are poaching victims, they’re the first line of defence for elephants in Kenya.

Flying high over the acacia trees and herds of elephants that roam the Tsavo ecosystem is Neville Sheldrick, one of the pilots that make up The DSWT’s Aerial Unit. It’s a privilege that’s not lost on him.

“While our ground teams understand the situation on the ground, their work limits them to a relatively small area of operation. In the Aerial Unit, we have the amazing opportunity to experience every corner of the Tsavo ecosystem and beyond,” explains Sheldrick.

Tsavo is comparable to the size of Wales or Massachusetts, so the ability to fly is a huge asset when protecting such a vast eco-system. The unit consists of four fixed-wing aircraft and one helicopter, and they operate daily to look for and report illegal activity, checking on elephant behaviour, locating injured wildlife and flying out vets to help them, and driving elephants away from communities.

Their role is especially vital when you consider that elephants can roam up to 80km over a day. While scouting for food and water, or using traditional migratory paths passed down from female to female, elephants do not discern man-made boundaries where a national park might end, and a farmer’s plot begins.

Increasingly, elephants are being forced into direct contact with humans as a result of communities building on the borders of national parks, small scale farmers planting in buffer zones, and herders bringing cattle into the park in search of food and water. The consequences of human activity are immense – elephants can be seriously injured or their calves can be abandoned in the chaos of conflict, while poachers can hide amidst illegal herders.

To find out who’s treating wounded elephants, continue reading below the advert

Bringing elephants back from the brink

It’s a little known fact that elephants snore. It sounds like a deep rumble. Dr Rono, a Kenya Wildlife Service (KWS) vet, would know best as he is part of one of the DSWT/KWS Mobile Vet units. To date, the teams have treated more than 1,800 elephants for wounds caused by poisoned arrows, spears and snares.

Dr Limo heads up The DSWT/KWS Mara Vet Unit, which is one of four DSWT/KWS Mobile Vet Units that cover 15 of Kenya’s national parks between them, in addition to the SkyVet service, which transports on-call vets to emergencies in remote or unattended areas. Thanks to Dr Limo and his colleagues, injured elephants and other wildlife have a lifeline. Each unit is fully prepared to treat any injured animal, thanks to a custom-designed vehicle and all the necessary equipment, including a vaccine refrigerator, dart gun, VHF radios, GPS, camera and binoculars.

Anaesthetic and a good aim (with a dart gun) are vital. Weighing up to six tonnes, a fully grown wild elephant can pose a real threat to anyone who comes into close proximity, especially when dealing with a protective mother, anxious herds or loyal friends hiding out in thorny bushes. Treatment depends on the wound – removing poisoned arrows can be a relatively simple operation, which takes about 15 minutes, whereas treating bullet wounds is a difficult task, as some bullets can become embedded deep in an elephant’s body and be impossible to retrieve.

“Determination and a will to save Kenya’s wild species has pushed my team and I to deliver in even the most challenging situations,” says Dr Limo. “Out of determination and a love for these animals, we do it. It requires a lot of caution and courage, but at the end of it all you feel greatly satisfied that you have helped to save one of these massive animals whose kind are dwindling,” he explains.

The fruits of their labour

A little elephant named Wiva is testament to the fact that protecting, treating and caring for elephants can mean more than just saving one individual. Wiva is one of 18 wild born calves to orphans that are now living back in the wild, and by giving each infant a second chance, as The DSWT did for Wiva’s mother, The DSWT’s Orphans’ Project also allows elephants to have their own wild-born young, which further helps a population that is in decline.

Wiva’s mum, Wendi, is one of 190 orphaned elephants that The DSWT has successfully hand-reared thanks to the pioneering efforts of their founder, Dr Dame Daphne Sheldrick DBE, who discovered the milk formula baby elephants need and who established the core principles that the keepers follow. This knowledge has also been shared with other orphanages and sanctuaries to help orphaned infant elephants elsewhere, and The DSWT’s passion for the species is regularly shared with local communities through community outreach projects, which include creating beehive fences to reduce human-wildlife conflict.

The importance of The DSWT Anti-Poaching Teams, Aerial Surveillance and Mobile Vet Units, together with their Saving Habitats project, which safeguards areas of biodiversity importance, is evident. Working together, they provide a safety net for the orphans and their wild kin.

To find out how you can play your part, continue reading below the advert

How you can help

All the work of The David Sheldrick Wildlife Trust is funded by generous donations from passionate individuals concerned about the future of our wildlife. Whether you donate to a specific project or a particular item like a bottle of milk, your donation can make a difference on the frontline of elephant conservation.

Visiting the DSWT’s Elephant Orphanage in Nairobi National Park is one way to gain a better understanding of their work. Open every day between 11 am and midday for a small entrance fee of US$7, you can see the youngest elephants have their mud bath and milk feed, and perhaps meet a muddy little elephant with whom to exchange hellos. Visitors can opt to stay at eco-lodges in the Kibwezi Forest, which help to fund the DSWT’s projects and are located close to the Ithumba Reintegration Unit. Alternatively, you can relax and unwind at Nairobi Tented Camp – the only accommodation in the national park – and then you don’t even have to leave the park!

But perhaps one of the best ways to get involved is to foster an orphaned elephant. From as little as US$50 a year, you can choose an infant elephant and follow their journey through monthly email updates. As the perfect gift for children, wildlife lovers or even yourself, it’s one way to get to know some of the characters at the nursery and be part of their recovery, as well as help to protect the future of the species.

Back to the future

The DSWT believes that there are few greater rewards than helping one of the world’s most iconic animals. Increasingly, the world’s citizens and governments are coming to this realisation too.

While working tirelessly on the frontline to protect elephants, they’ve been campaigning to end all trade in ivory and are happy that some hugely positive steps have been taken in the past year. The most important of which are the recent announcements by China to end its legal domestic ivory trade. This should hopefully pave a new era for the species and, if promises prevail, everyone can hope to secure a future for Murit and his wild kin. 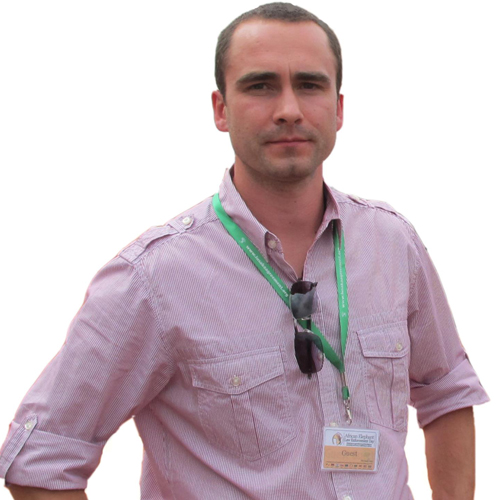 Having established and directed The David Sheldrick Wildlife Trust’s UK charity from the outset in 2005, Rob Brandford’s passion for wildlife conservation stems from his own deep, personal appreciation for nature and wild spaces.

With a particular fondness for elephants, Rob remains committed to educating the world about the crisis facing the species so that, together, we can guarantee them a future.