Rhino poaching in Botswana – why the smoke and mirrors?

Posted on June 10, 2021 by Simon Espley in the Opinion Editorial post series.
ShareTweetPinEmailShareShareLinkedIn 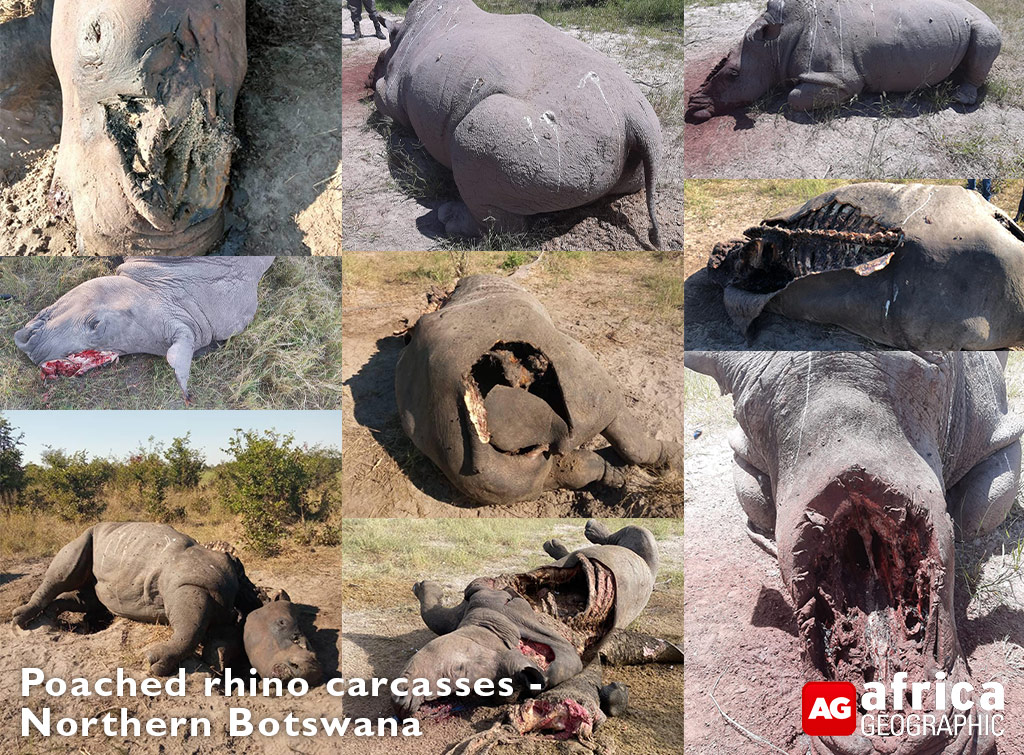 That we are seeing increased rhino poaching in Botswana’s Okavango Delta region is no secret, as your news feeds will bear witness to.

During the last few months, I have received several phone calls from respected members of the African conservation and tourism industries. The clear and urgent message has been that rhino poaching in Botswana is rampant and that Africa Geographic should investigate and let the world know what is going on. But, unfortunately, my requests for specific facts and evidence were initially rebuffed for fear of persecution by the Botswana authorities.

Eventually, bits and pieces of information and documents from various sources started dripping in. We also received a batch of photos taken off the mobile phone of a poacher – a unique behind-the-scenes look into this sordid industry.

What follows is our attempt to make sense of the toxic mix of official silence and considered input from members of our networks. We do not present this summary as hard facts – we suspect that even the Botswana authorities do not know precisely the scale of the rhino poaching problem. Instead, this is as close as we can come to at the moment to understanding the scale of the problem regarding the poaching of Botswana’s rhinos.

At the outset, I must emphasise that my team and I attempted to contact individuals within the relevant Botswana government departments over the last two weeks. In the spirit of a request by Dr Kabelo Senyatso, Director of the DWNP, on 2 March 2021 that we all “…verify any anti-poaching data with DWNP before making irresponsible and misleading statements that may have a negative implication on Botswana.” we did just that. Initially, there was no response from any Botswana government official – no returned phone calls, emails or social media messages. Finally, last week we managed to make telephonic contact and were provided with two email addresses to forward our queries to, which we did. To date, there has been no response, despite several reminders.

Extinction and the come-back

Botswana’s free-roaming rhinos were poached to extinction during the mid and late 1990s – with the last black rhino going down to poachers in 1992. The decision was then made to re-introduce rhinos, and several private and government projects have focussed on just that – bringing rhinos back to northern Botswana’s wild areas. The project was by most accounts a success, with a 2017 IUCN report estimating that Botswana had 452 white and 50 black rhino– 502 rhinos in total – at the time.

Between 2010 and 2018, only one rhino was poached – by a fisherman poacher in what appeared to be a random, opportunistic killing. The poacher was arrested. In mid to late 2018, poaching escalated rapidly – initially in private game reserves and then in the vast Okavango Delta area.

These are the estimates we have gathered about the number of Botswana rhino that have been poached:

Whether you are inclined towards the higher or lower estimates, these figures are significant. Even a conservative estimate based on the above of 120 rhinos poached over 2 ½ years (ave 4 per month) amounts to 24% of the estimated population before the poaching commenced. By comparison, South Africa lost 32% of its rhinos to poaching in the two years to 2019 and 67% over the nine years to 2019. South Africa has 8-10 times more rhinos than Botswana and the number of rhino being poached is therefore significantly higher.

Some black rhinos were successfully captured and moved to a safe area, and it is believed that there are now few, if any, free-roaming black rhino in the Okavango Delta – the others having been poached. Some white rhinos were dehorned, but dehorned rhinos were amongst those poached – as has been the case in South Africa.

The poachers and networks

Our sources tell us that up to six poaching gangs now operate in the Okavango Delta area, and we have viewed evidence that alleges at least one Botswana Defence Force helicopter pilot was/is involved (more about that later).

Evidence suggests that the poaching gangs have branched out from elephants to now include rhinos. Many of the poachers are from Zambia and Namibia and are assisted by locals. Minister Kerenge explained in parliament: ‘Let me explain that it is a network and syndicate of both Batswana and foreigners’.

Rhino horns captured in seizures as far afield as the Democratic Republic of Congo have been DNA-traced to Botswana. Similar testing of ivory indicates that the elephants were poached in the Kavango-Zambezi Transfrontier Conservation Area (KAZA). According to our sources, ivory and rhino horn poached in Botswana are trafficked to Congolese buyers in Lusaka (Zambia) and Chinese buyers in Windhoek (Namibia).

According to evidence that we have studied, at least one Botswana Defence Force helicopter pilot was being investigated in 2019 for allegedly working with known poachers – providing real-time rhino locations and security updates. Furthermore, it is alleged that the pilot is related by marriage to one of the known poachers.

Several in our networks expressed fear about being blacklisted by the Botswana authorities if they were to be associated with this article. One suggested that this is often a subtle process – with permissions/licenses/permits etc., to operate in Botswana being withdrawn and economic opportunities being denied.

When former President Khama publicly stated that this failure to manage rhino poaching would negatively impact the tourism industry, DWNP director Dr Kabelo Senyatso responded with  “…security sensitivities of the subject matter … potential negative implication on tourism … economic sabotage.”. And yet, various ministers have made equally concerning statements relating to rhino poaching (read the links provided in this article).

Senyatso goes on to claim that “…DWNP has a long-standing policy of not discussing operational and security-sensitive anti-poaching information in the media, as that only serves to increase the safety risks that our on-the-ground operatives face.” And yet, the links in this article prove that government ministers do not respect this secrecy policy.

One bizarre (in the circumstances) statement by Minister Kereng during a parliamentary discussion in August 2020 seems to make a mockery of this supposed strategy of keeping poaching-sensitive information out of the public eye: “After de-horning, the horn grows back, same as a nail. When the tourism sector reopens, tourists are going to find our rhinos with horns.”

Where to from here?

My observation is that rhinos and elephants are now such highly leveraged political collateral in the battle to influence people and win votes, there is unlikely to be much common sense in the public rantings of politicians and others who have spotted the same opportunity.

This tunnel-vision strategy is surely preventing meaningful discourse, sharing and collaboration – and wreaking havoc at ground level. That information vacuum is being filled with conspiracy theories and guesswork. And the dominance of political manoeuvring over best-practise is creating an opportunity for well-organised crime syndicates. The same crisis exists in South Africa – for similar reasons.

Who knows what is going on behind the scenes, which valuable experience is being ignored and even suppressed because it originates on the other side of some ideological fence? The Botswana government has a deserved reputation for stellar wildlife conservation. How quickly that will change if the current leaders continue to duck and dive in the midst of a massive increase in poaching of rhinos and elephants. While old scores are settled and egos assuaged, the crime syndicates are making a fortune out of the slaughter.

Accurate rhino poaching statistics will, one day, rise to the surface. And by then, we will know how effective the Botswana government is at curtailing what appears to be rampant poaching. My sincere hope is that someone in the Botswana government rises above the noise soon and starts making good decisions. Am I hoping for too much? Time will tell.

Africa Geographic has a policy of not disclosing specific locations of rhino and other target species. Locational terms such as ‘Northern Botswana’ and ‘Okavango’, as used in this story, do not provide new or useful information to criminal syndicates, who rely on real-time and granular locational information provided primarily by insiders and local people.