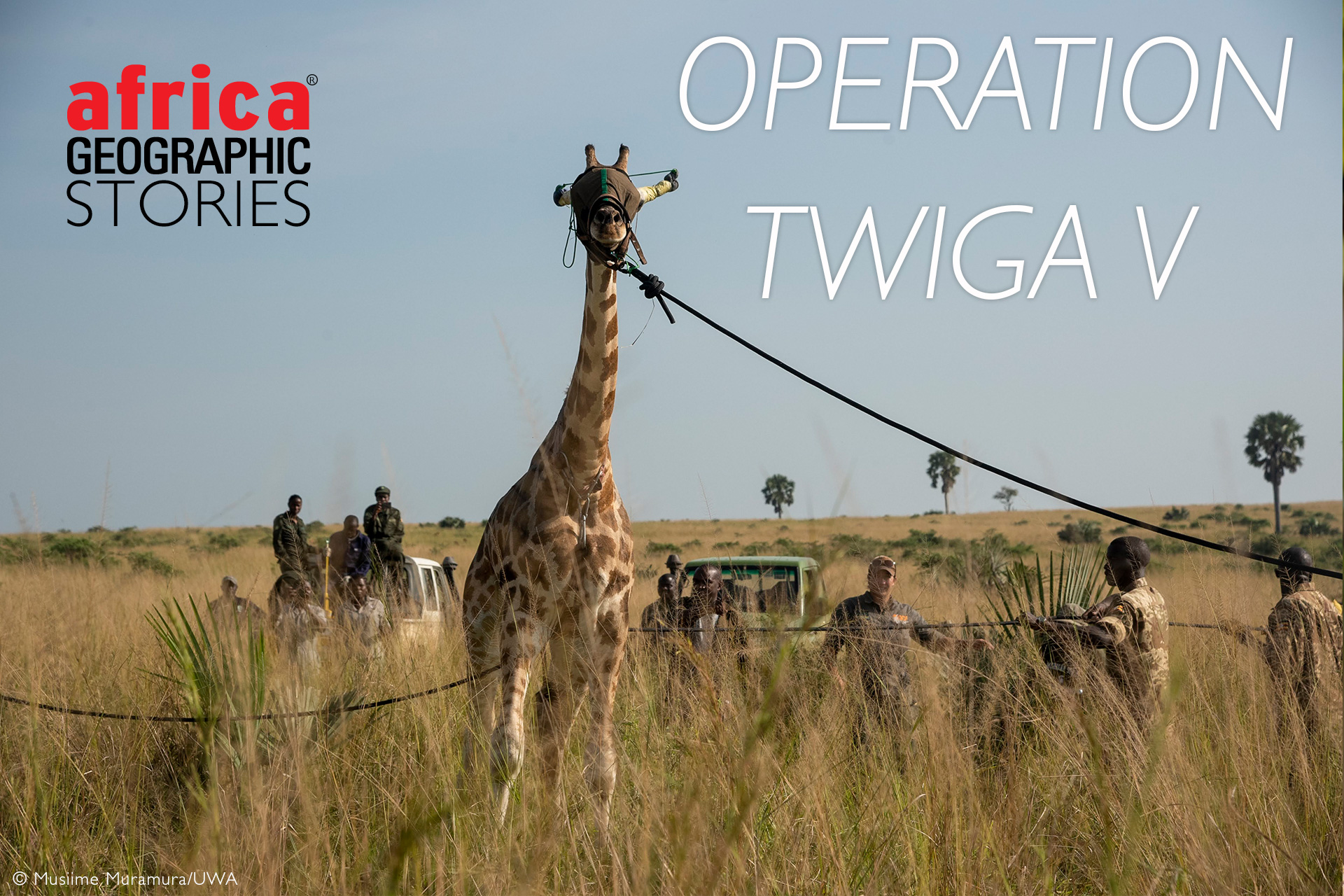 This year proved to be unprecedented on a great many levels. Covid-19 has made all of us adapt to an ever-changing and unpredictable schedule, from working from home, surviving varying levels of lock-down and social isolation, to coping with the realisation that we will likely take a while before we return to “normal” as we knew it – if ever. With all this in mind, we at the Giraffe Conservation Foundation (GCF) are happy to continue providing positive conservation stories. While so much has changed, there is still great work being done in support of giraffe conservation throughout Africa!

Operation Twiga V (twiga is Swahili for giraffe) is the sixth consecutive giraffe conservation translocation that took place in Uganda. The ‘Pearl of Africa’ is home to over 60% of the Critically Endangered Nubian giraffe, one of three subspecies of the northern giraffe. Previous years have seen giraffe re-introduced to Lake Mburo National Park (NP) and the southern bank of Murchison Falls NP, as well as supplementing the small giraffe population in Kidepo Valley NP.

Last year, Operation Twiga IV saw the re-introduction of giraffe to Pian Upe Wildlife Reserve (WR), an area where giraffe had been locally extinct since the late 1990s. This undertaking was part one of a two-phased initiative to re-establish giraffe in Pian Upe WR. Earlier in 2020, it was unclear if this translocation would be possible but the stars aligned to allow the Uganda Wildlife Authority (UWA), with direct support from GCF, to proceed with this exciting initiative. Special considerations had to be made due to Covid-19; however, the slightly smaller but well sanitised and masked team took to the field in mid-November to capture giraffe and begin the operation. This followed weeks of weather-related delays as roads and bridges had to be rebuilt after heavy rainfalls.

Over three weeks, a total of 15 subadult Nubian giraffe (11 females, four males) were safely caught in the northern section of Murchison Falls NP, housed in a temporary boma, and transported over 480 km to Pian Upe WR – all without a hitch! The UWA, GCF and Uganda Wildlife and Education Centre (UWEC) team worked seamlessly together to make this one of the most successful translocations in Uganda’s history. This is a testament to a great team effort based on six years of joined experience coupled with the ongoing support and training from GCF and additional collaboration from wildlife and zoo professionals from around the world.

Pian Upe WR is the second-largest protected area and the largest wildlife reserve in Uganda. Established in 1965, it was home to the largest population of Nubian giraffe in Uganda until years of civil unrest and armed conflict resulted in the decimation of giraffe and most other wildlife species from this area. The remaining wildlife populations within the reserve have slowly recovered since the cessation of civil unrest in the country, aided by the efforts of UWA (along with support from partners such as Karamoja Overland Safaris) to increase security and management of the reserve. The initial population of giraffe re-introduced last year has been closely monitored, and all are adapting very well to their new habitat. With the additional 15 giraffe translocated during Operation Twiga V in November 2020, Pian Upe WR now has an excellent founder population on which to continue the rehabilitation of the reserve.

As with last year, three individuals were fitted with solar-powered GPS satellite tracking units (ossi-units) by GCF – to assist with post-translocation monitoring as well as to elucidate more on how the giraffe utilise their new space. The data gathered from these units will not only help with continued monitoring of giraffe movements but will also be used as part of GCF’s larger Twiga Tracker Initiative, the most extensive GPS satellite tracking study ever conducted on giraffes. To date, GCF has fitted more than 200 giraffe in ten African countries with such units to help monitor them remotely.

Uganda now boasts five thriving Nubian giraffe populations, and their numbers are steadily increasing. These translocations are a vital conservation tool to secure the future for the Critically Endangered Nubian giraffe, as emphasised in the National Giraffe Conservation Strategy and Action Plan (2020-2030). The largest Nubian giraffe population in Africa occurs in Murchison Falls NP, a park that is under pressure by impending oil exploration and drilling, intense infrastructure development, as well as poaching for bushmeat. It is, therefore, crucial to disperse giraffe back to their former historic ranges throughout Uganda to preserve the integrity of this iconic animal. We at GCF are proud to support all aspects of Uganda’s giraffe recovery, a real modern-day conservation success story.

Operation Twiga V stands testament to what can be achieved when passionate people come together not only with the team on the ground but also with giraffe conservationists and supporters from around the world. Without funding support from partners and individuals across the globe, this amazing effort would not have been possible. We want to use this opportunity to thank all our supporters for their generosity and for helping us spread the word both on the plight of giraffe and these conservation success stories. It is a genuinely incredible conservation effort all around for the entire team led by UWA, and especially for veterinarians Drs Patrick Atimnedi, Robert Aruho, and Eric Enyel, as well as our GCF team, Drs Sara Ferguson and Patrick Okello.

The Giraffe Conservation Foundation (GCF) is the only organisation in the world that concentrates solely on the conservation and management of giraffe in the wild throughout Africa. GCF is dedicated to a sustainable future for all giraffe populations in the wild. From our base in Windhoek, Namibia, and regional offices in Kenya, Niger and Uganda, GCF’s small and dynamic team supports giraffe conservation efforts in 16 African countries. For more information, visit their website.

For more about giraffes read this story.